Melbourne has had ants in its fashionable pants in recent years, as our humble (awesome) city is slowly inundated with the labels that we fashion-obsessed used to have to fly to London or New York to find.

As international stores recognize the huge buying power in Melbourne for fashion, and the strength of the steady buyers-economy, we are seeing more stores pop up, ready to tend to an all-too-ready cash flow.

There are obviously huge benefits in this international interest; it means we have more options, and will ensure our shopping districts thrive, drawing more attention to Melbourne as an attractive travel destination.

Melbourne’s GPO is causing some talk, following the recent notice given to tenants on the lower level of the shopping mecca halls, that they would be obliged to make way for an as-yet mystery tenant, which is tipped to be either Apple (a store sorely and surprisingly missing in the CBD) or the hugely successful Swiss chain retailer, H&M. 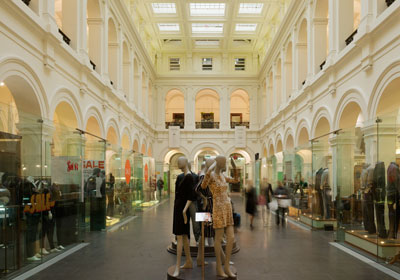 The concern with this prime retail spot being taken over by a chain store is understandable, as it could mean the departure of GPO favourites such as FAT, Willow or sass & bide – labels which combine to douse the shopping precinct with inimitable cool.

Whomever the space is promised to, it is obviously keenly sought after, and is likely to be taken over by an extremely lucrative retailer who will bring even more shoppers to the CBD.

Despite the public dismay and divided opinion, the proposed change does not necessarily spell disaster. An international retail giant can co-exist with local boutiques, in a symbiotic relationship wherein the chain feeds on the cultural-swag of much-loved Australian designers, and simultaneously brings in a swarm of shoppers who might not have entered the halls otherwise.

In the wake of comments recently by Bettina Liano, who said Melbourne’s Little Collins Street was a “ghost town” when it came to retail, perhaps an international focus on Melbourne will add zest and life to the districts that also boast some of Melbourne’s proudest and trendiest indie boutiques, such as Lenko and Design a Space as well as Melbourne-based designers like Gorman and Lady Petrova.

Anyone who knows GPO knows the sartorial scene is really the entrance steps.

Whether we swan up those stairs to get our iPhones replaced when they suddenly, inexplicably, start to glitch after an accidental bathtub slip, or to pick up the latest H&M designer collaboration, the GPO allure will remain, and Melbourne’s reputation as a hotspot for shopping can only increase.