On a recent visit to the states, thanks to the lovely JC and Dean from Madam Virtue, Couturing were not only fortunate enough to attend the Holiday Window opening for accessories institute Henri Bendel, but were personally given a tour of the store by one of the lovely assistant accessories buyer Joe Guevera. 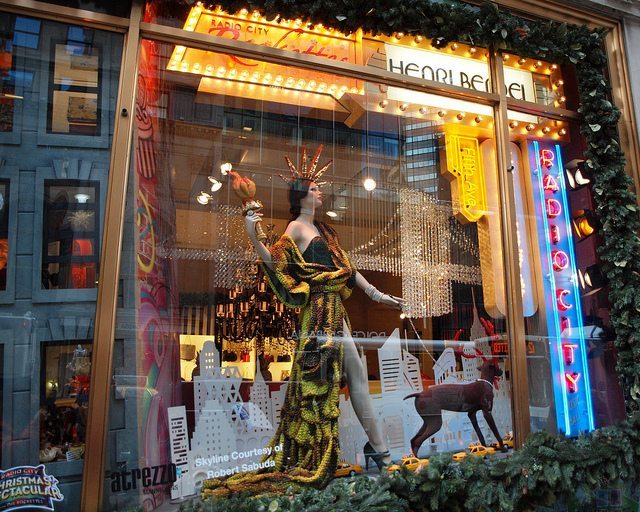 The revealing of the department store windows in the US is a big event, with Henri Bendel being the first shop to display it’s creativity.

Open since 1895, Henri Bendel’s signature brown and white striped bags have been seen on the arms of some of the most stylish women from around the world. Specialising in accessories and cosmetics, Henri Bendel not only has their own accessories brand, but their buyers travel the world to source accessories from some of the world’s most talented designers, particularly supporting emerging designer.

A large crowd gathered outside the window, which was covered by a curtain. 8 Radio City Rockettes performed in front of the window before it was revealed to the sounded of New York, New York by Frank Sinatra.

Inspired by the Radio Christmas City Spectacular and the 125th anniversary of the Statue of Liberty, the Henri Bendel design team draped a bejewelled Statute of Liberty mannequin in a beautiful gown made of over 3,000 hand-painted painted watermelon, root beer and pear flavoured jelly beans. In the background was a Brooklyn Bridge made of Swarovski crystals and city skyline. At the feet of Lady Liberty was a miniature New York streetscape featuring quirky details such as a woman in her apartment texting on her mobile.

Once viewing the window, guests were invited inside for champagne and canapés as they browsed the beautiful range of accessories and cosmetics.

Above the make up counters were two very New York installations, one made entirely of mini yellow cabs and one made of coffee cups.

Joe showed Couturing around the beautiful multi-level store, which was a previously a townhouse. It was hard not to want to buy all the beautiful accessories!

Thanks to the team at Henri Bendel for hosting such a great event, and a huge thanks to show for showing Couturing around the amazing store. Thanks also to Madam Virtue for getting Couturing an invite!