The most successful franchises of all time, British spy James Bond has captured the hearts an imaginations of people around the world. To coincide with the newly launched James Bond exhibition at the Melbourne Museum, Room 8 productions are staging a musical extravaganza, The Songs of James Bond, playing tribute to one of history’s most loved spies.

The songs of James Bond have contributed to the cult status of the series, with music legends such as Etta James, Tom Jones, Shirley Bassey, Nancy Sinatra, Paul McCartney, Tina Turner, Duran Duran and Adele, just to name a few, having performed the title song for the movies over the years.

Two of Australia’s most respected singers, Susie Ahern and Maria Mercedes will be joined on stage by two of Australia’s most exciting music talents, Kiyomi Vella and Ben Mingay, to perform 22 songs from the Bond movies in a 2 hour concert, which will appeal to James Bond and music fans of any age.

Visual artist Georgie Pinn has created an exclusive backdrop for the performance which has been inspired by the drama of the Bond movies. The Spectre Orchestra, a fourteen piece ensemble, made up of some of Melbourne’s most in demand and talented musicians, will be bringing a modern take on the classic harmonies. 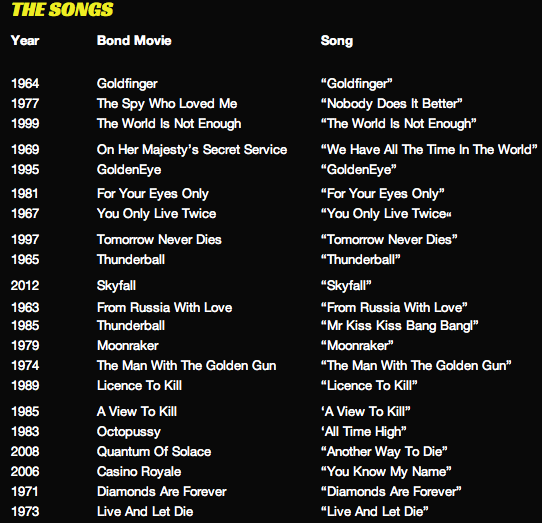 This is set to be a concert not be be missed, so make sure you book your tickets now, so you can sit back and enjoy (maybe with a martini or two, shaken not stirred of course), some Australia’s top talents performing some of history’s most classic songs.