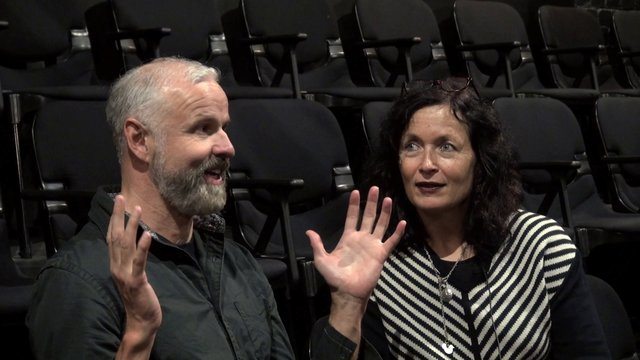 You know something different is about to happen the moment you walk into the Malthouse Tower Theatre. Phillip Adams, the artistic director and performer of THUMB: A Performance In Progress, sits just to the right of a precariously stacked mountain of polystyrene boxes that lie towards the middle of the room, and carefully watches everyone as they take their seat in one of only twelve chairs available.

Eventually, he stands, and singles out one man in the audience.

‘I would like to use you in my show. Please take off your shoes.’

He repeats this strange interaction four more times, and when he has finally amassed his team of five tall, nervous participants (which, as it happened, included my friend), he directs them all to sit in the five seats set up directly in front of the white artificial mountain, each with their back to us.

THUMB is Adams’ first solo theatre work, and explores the psychology of scale. The piece is split into two sections – first exploring the gigantic and then the miniature – and involves both installation and performance. Taking its name from the classic tale of Tom Thumb, THUMB was inspired by the size changing themes of 1950s and 1960s cinema, and features a number of the iconic sounds and scenes from films including The Incredible Shrinking Man and Troll Hunters. The piece is highly participatory, with the five ‘performers’ undergoing hypnosis in the first half hour. Yes, hypnosis.

Things get weird once the participants are put into a trance. The participants are each fitted with a construction hat featuring a large magnifying glass, at which time Adams undergoes his first costume change of the night. He disappears behind the polystyrene stack, which we, and the participants, are told is really a snow capped peak, and reemerges over the back of the mountain dressed in some sort of shiny, silver outfit, complete with a terrifying silver mask reminiscent of the Sandman from Batman Begins. While to the audience, the scene looks comical, you can imagine in the eyes of the hypnotized, who are observing the scene through a magnifying lens, the sight of this yeti-ish creature climbing down to them from this snowy peak would be somewhat disconcerting.

Things get even weirder when Adams decides he hates the mountain he’s built, and sets about breaking it down, throwing box after box at his poor, cowering subjects, all to the sound of a fast tempo score.

The production continues in this exploration of the surreal, and features yet one more costume and character change by Adams. When it finishes, you are left not knowing exactly what to think or feel. As a member of the audience, the whole thing seemed utterly bizarre. Fascinating, yes, but completely incomprehensible. However, when I spoke to my friend after she was released from her role, I was given insight into the other side of the performance. For her, everything had seemed real. She had been overcome by genuine fear at the site of the ‘avalanche’, and had been confronted with memories from her past she hadn’t recalled in years.

Her experience had been something entirely different to mine, and of the two of us, only she had truly experienced the scale-shifting perception that was at the heart of Adams’ piece. Regardless, it was an intriguing dramatization of how small we are in comparison to our ever expanding world.