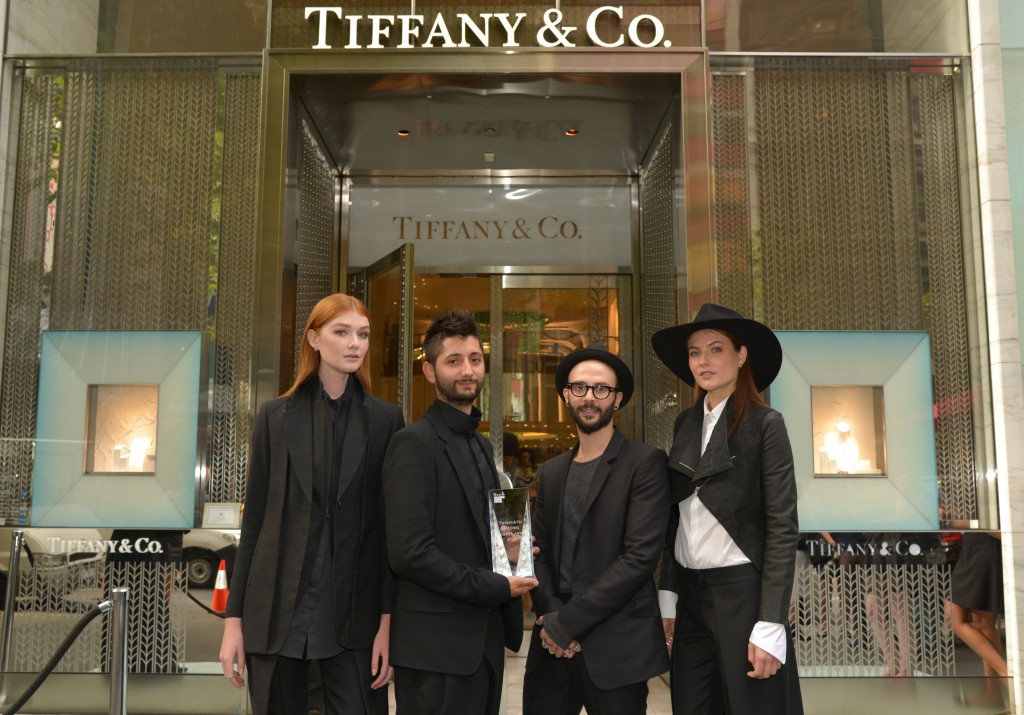 The Virgin Australia Melbourne Fashion Festival (VAMFF) yesterday announced Peter Strateas and Mario-Luca Carlucci of Victorian based label, STRATEAS.CARLUCCI as the winner of Australia’s most prestigious and highly regarded fashion award, the Tiffany & Co. National Designer Award supported by Harpers BAZAAR. Tiffany & Co. presented design duo Peter Strateas and Mario-Luca Carlucci with a $10,000 cheque and custom designed trophy. They will also receive a trip to New York, courtesy of Virgin Australia. Whilst in New York they will participate in a private meeting with the Tiffany & Co. design team and behind the scenes tour of their New York flagship store and design workshop.
Harper’s BAZAAR’s Fashion Director, Thelma McQuillan will style STRATEAS.CARLUCCI’s lookbook for the following season; they will also receive a pop-up store at Westfield Doncaster for the duration of one month, legal services from K&L Gates and a coveted piece from Tiffany & Co. Now in its 18th year, the Tiffany & Co. National Designer Award recognises designers in their early stages of business, who excel in creative design and quality and who demonstrate potential for growth and development within the industry. The award has been a launch pad for some of Australia’s leading designers including Dion Lee, Toni Maticevski, Christopher Esber, Josh Goot, Yeojin Bae, Romance was Born, Song for the Mute and From Britten. Australian fashion industry heavyweights worked together in judging the six finalists for 2014 including bùl, Christina Exie, Haryono Setiadi, Livia Arena, Pageant and Strateas Carlucci.
Graeme Lewsey, Festival CEO, was overwhelmed by the calibre of applicants for 2014. “The number of quality of the applicants this year was exceptional,” said Graeme. “STRATEAS. CARLUCCI presented a very impressive collection and, on behalf of all judges, we believe the label demonstrated the strongest potential for future development and global success.” Glen Schlehuber, Managing Director of Tiffany & Co. Australia said “The aim of the Tiffany & Co. National Designer Award is to support the next generation of talented Australian designers. We hope that this award will assist in supporting STRATEAS.CARLUCCI on their road to continued development and success.”
Launched just over two years ago, STRATEAS. CARLUCCI have already made an incredible mark on the Australian fashion industry. Backed by a strong design aesthetic, vision and years of combined design experience, Peter Strateas and Mario-Luca Carlucci specialise in leather and sculptural pieces rendered in primarily black and white for both men and women. Images by Lucas Dawson