I spent Spring travelling around the north and east coast of Spain. It was my first time in the country, and like many tourists, my deluded romantic notions sprang from a combination of home-made sangria and close ups of Javiar Bardem. The two regions that I explored were Basque Country and Catalonia. Both regions are fiercely nationalistic and desire autonomy from Spain. Part 1 of Spain’s Rebel Regions articles is concerned with Basque Country and provides tips and hints for any tourists new to the region.

Basques are proud. They have their own language, cuisine and culture, and they don’t particularly enjoy being referred to as Spanish. Basque Country’s quest for sovereignty led to a bloody 50-year conflict that officially ended in 2011. The conflict was between separatist organization ETA and the Spanish administration, who regarded ETA as a terrorist group. Most Basques detest ETA’s violent approach to independence yet very few (from my observations) identify themselves as Spanish. When travelling around Basque, be sure to get in a heated conversation with the locals. More often than not, I found that locals were passionate and eager to discuss their failed bid for independence. They also get a thrill out of educating an Australian. 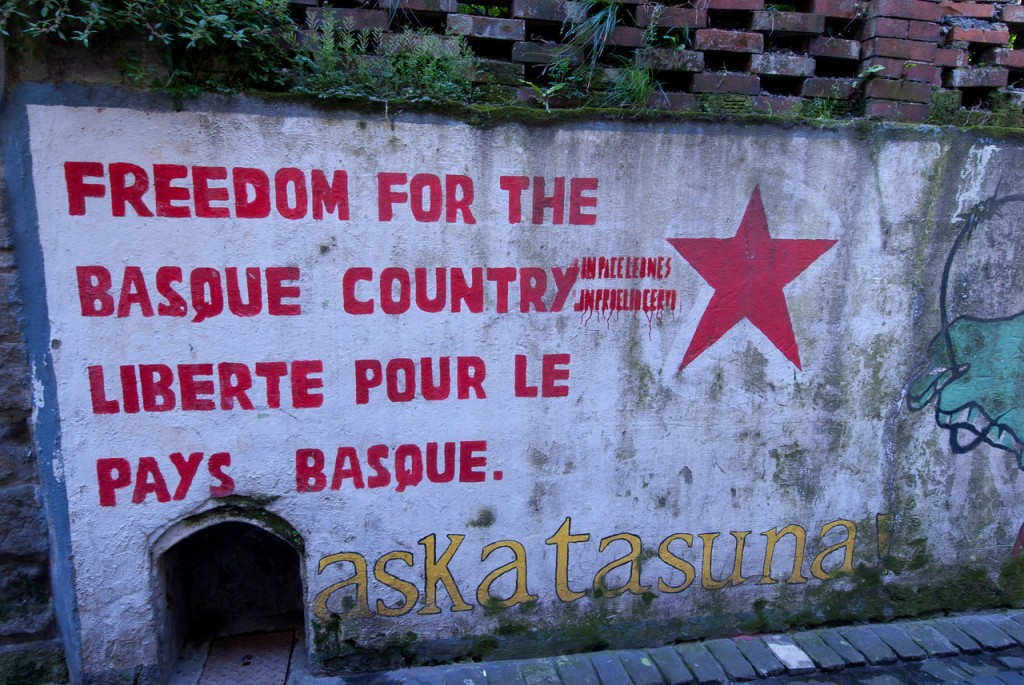 San Sebastian lies 20 km east of France, along the Bay of Biscay. It’s a town in flux. One trying to manage the decade flood of rowdy tourists, which have moulded San Sebastian into both a surf town and retirement village – perhaps that’s why the Aquarium is regarded as one of San Seb’s “star” attractions. One must, however, ignore the Disney-inspired rollercoaster and drunk Americans and search for the heart of San Seb, which like most Spanish towns, resides in the guts. 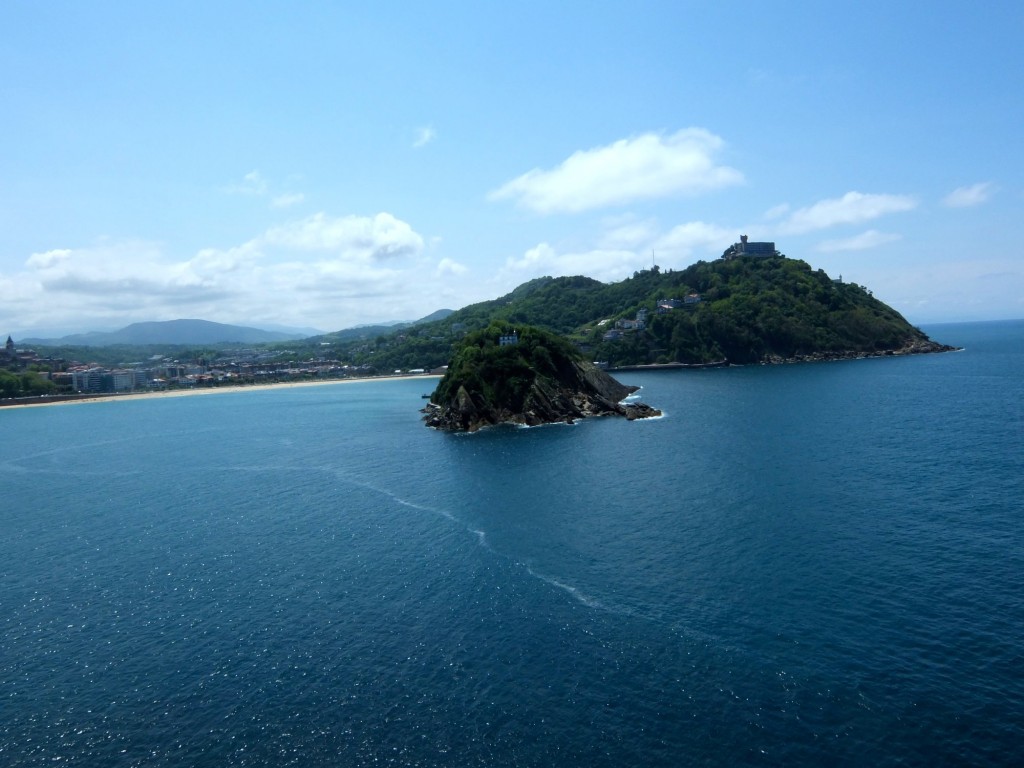 Pintxos. Oh there are very few things in this world as perfect as these little parcels of pleasure. Bite-sized and savoury, some spicy, some creamy, just do not, whatever you do, order off the counter. Pintxos are Basque’s interpretation of tapas. Originally the term described food skewered with a cocktail stick, but today it defines anything served at a pintxo bar. There are over 200 of these eateries in Old Town, but luckily for you, dear reader, I did my research. 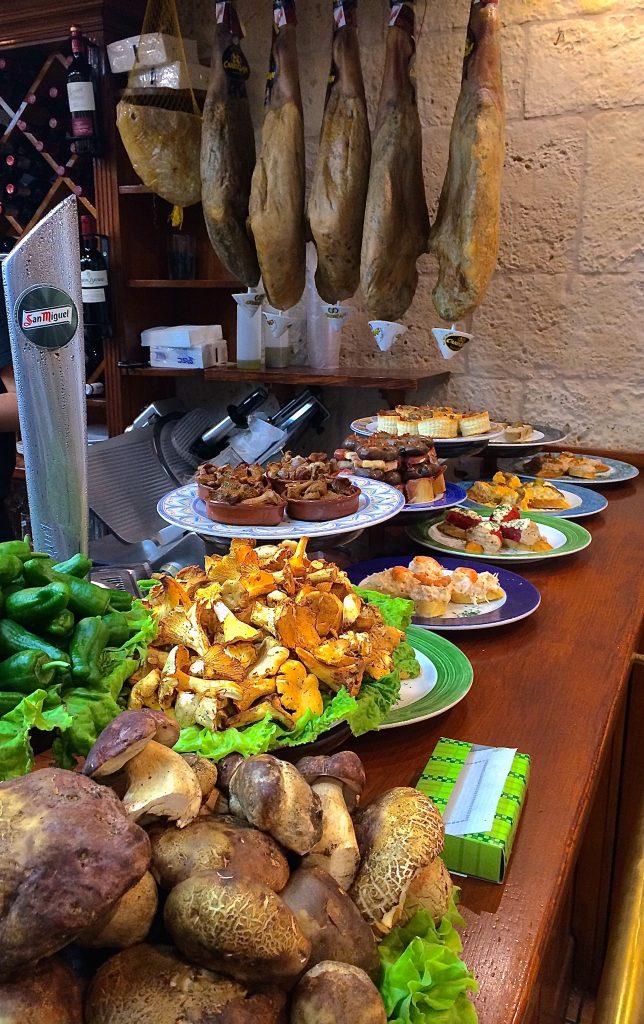 A pintxo bar at dinnertime is much like the Running of the Bulls: confusion, intimidation and the inevitable skewered chunk of meat. Defeated and disappointed with my food choices, I spoke to a few locals, who informed me that Basques rarely order food off the counter. Instead they order the house specials, fresh off the menu, which cooks in less time than it does to fight for the stale, buffet pintxos. Below are my top five house specials in San Sebastian:

1) Brocheta de Gambas at Goiz Argi. These skewered prawns are a traditional pintxo and the perfect combination of spicy and sweet.

2) La Hoguera at Zeruko. This bar is the hot spot for molecular and nouvelle pintxos.  La Hoguera is a cod served on your own flaming bonfire. Rumour has it that the chef is opening a Zeruko in New York – lucky bastards! 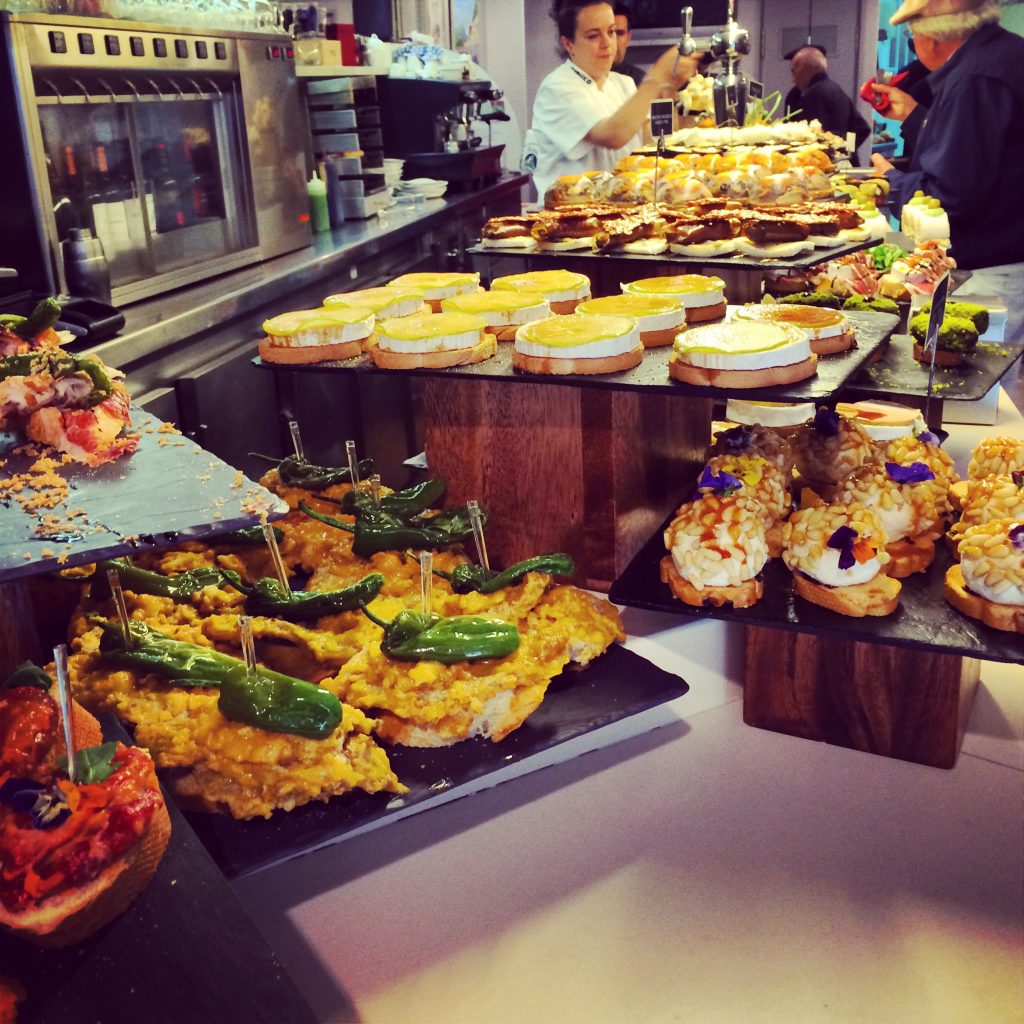 3) Ravioli de Foie at La Cuchara. One large ravioli parcel stuffed with foie gras. It’s a gorgeous little venue that has survived off the tourist track with not a counter-rotting pintxo to be found.

4) Rabo de Buey at Astelena. A seriously rich and tender serve of ox tail. Enjoy whilst sipping a glass of Tempranillo and people watching at the Plaza de la Constitucion.

5) Tarta de Queso at La Vina. Cheesecake like you have never had before. I cannot exaggerate how moreish this is. Do not leave San Sebastian without tasting a slice or two. 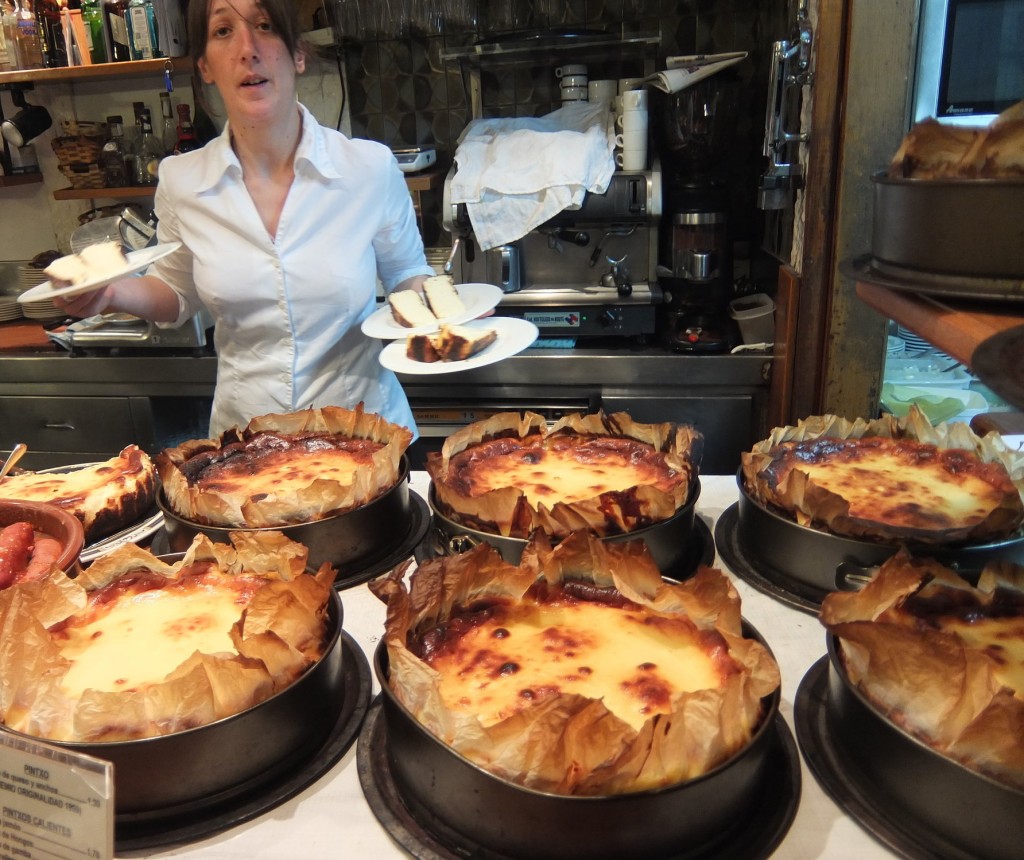 If you’re staying more than a couple of nights in San Sebastian (which you most definitely should do) I would recommend a Pintxos tour. Ah! I know, Cringe! Don’t worry, I hate tours and strangers too, but Loudres likes a drink and knows all the hot spots; www.sansebastianfood.com

When your taste buds have been exhausted feast your eyes at Ekain Arte Lanak. The gallery opened in 2000 and specialises in exhibiting the work of local Basque artists. Basque art is traditionally concerned with exploring space and perception. I fell in love and took home with me this little sculpture by Ramon Cabestany. Sneaky Tip: If you pay in cash, you may get free shipping… 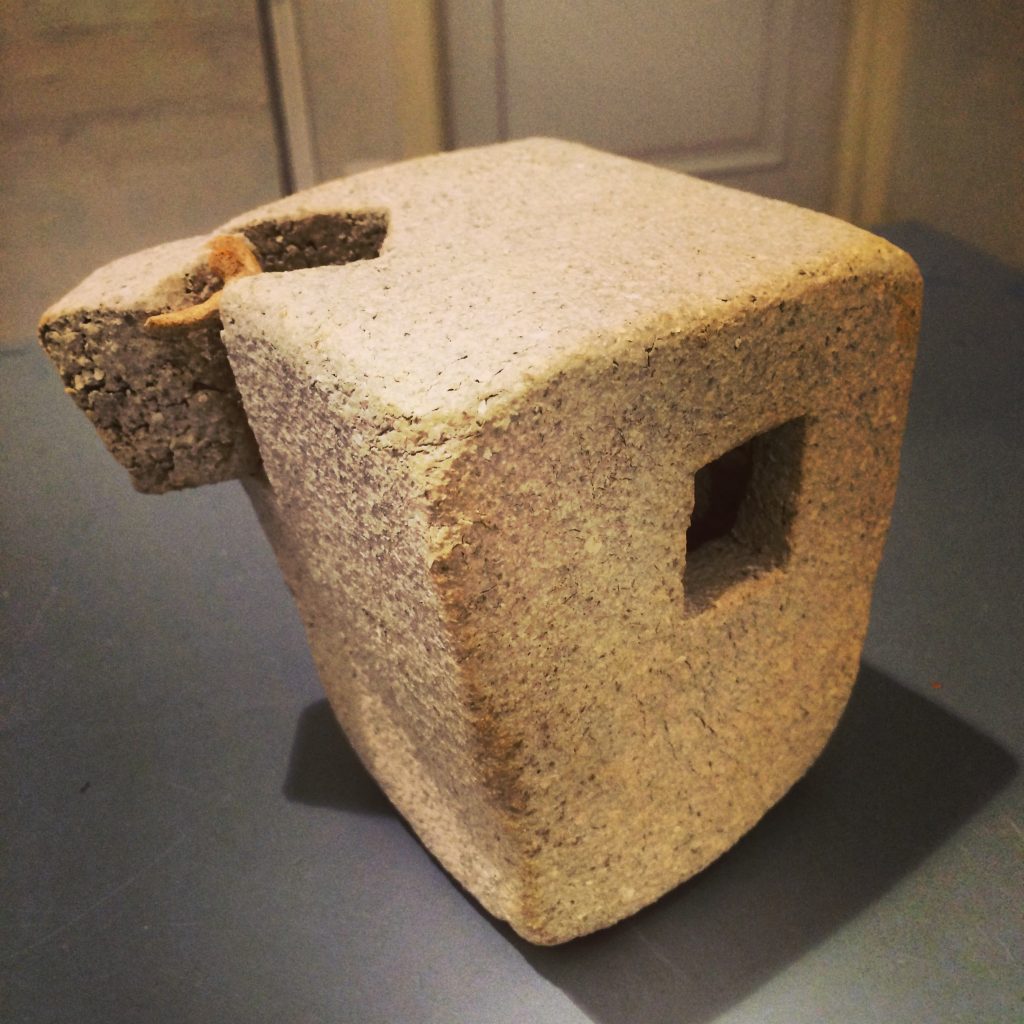 A Sagardotegi is a Basque Cider House come fraternity. It’s loud, rowdy and oh, so much fun. After a week in Old Town and having had our fill of pintxos we booked dinner at Petritegi Tolare, a beautiful stone cider house that was constructed in 1558 and is surrounded by orchards. Inside, it is a communal-dining situation with rows of benches and lots of group singing. The highlight of the sagardotegi was the help-yourself cider, which flowed out of story-high barrels like a Dionysian fantasy. 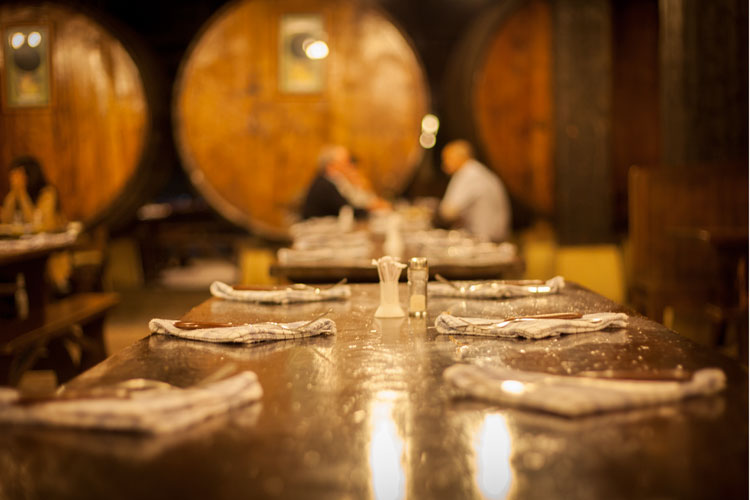 Bilbao is Basque Country’s largest city. Primarily an industrial town, the construction of the Guggenheim Museum and an influx of infrastructure investment sparked Bilbao’s hospitality and tourism sectors. I will be honest though, dear reader, I did not fall in love with Bilbao. Rather, I found it disjointed and impenetrable, but for this I take full responsibility. Bilbao is not a city where one can simply “wing it.” Learn from my mistakes: do your research, make reservations and learn when exactly the food market is open – because I hear it’s spectacular.

Whilst Bilbao may not have been my favourite city, the Guggenheim Museum was the highlight of my trip and a must see for anyone visiting Basque Country. The building was designed by Frank Gehry, one of the world’s most influential architects, and completed in 1997. Put simply, the Guggenheim Bilbao is a piece of art; a breath-taking construction that perfects the use of form and material. The museum is known for its contemporary, large scale and site-specific works. I was lucky enough, however, to be there during the Yoko Ono retrospective, which exhibited Ono’s life work. I found the most moving piece to be a recent video of Ono, performing her life’s story through a slow and silent dance. It was intimate, erotic and melancholy. 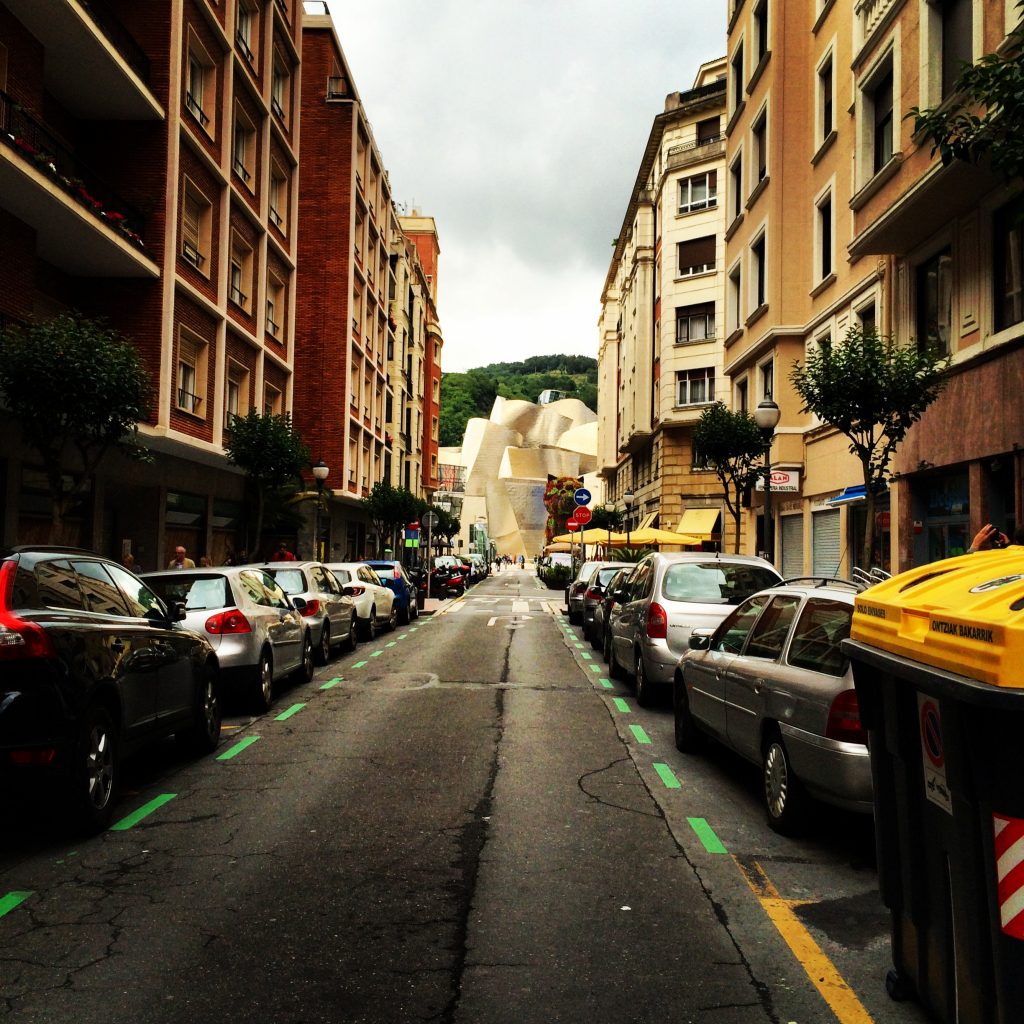 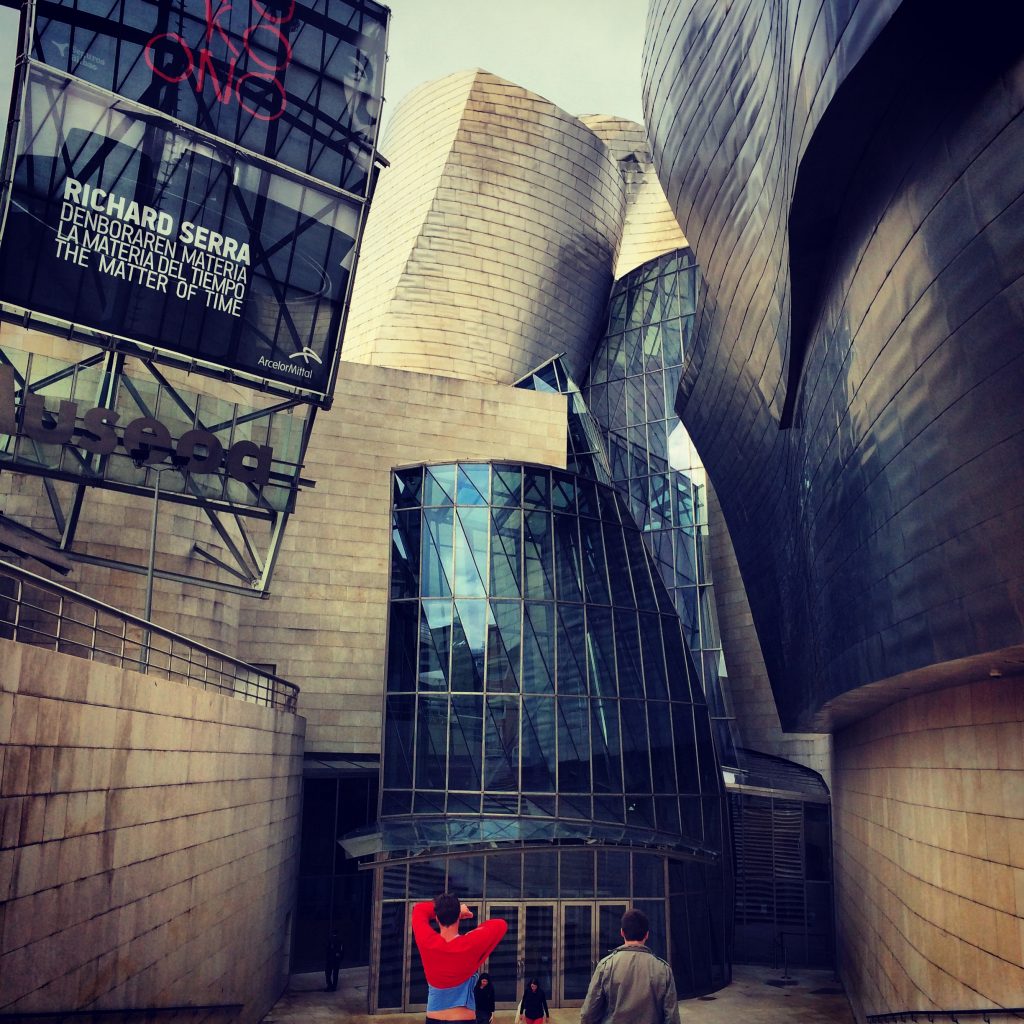 All photos were taken by the author, except for three taken from travelphotos.everything-everywhere.com, shacksbury.com and fr.wikipedia.org/wiki/Bilbao