The makeup at General Pants was distinctly fresh and dewy screaming SPRING to those counting down the last few days of Winter. Maybelline New York kept the focus on the eyes, leaving skin appearing fresh and slightly glowing. Artists applied a light application of Dream Fresh BB cream for the base and swept FITme Blush on the apples of the cheeks for a slight sun kissed look. 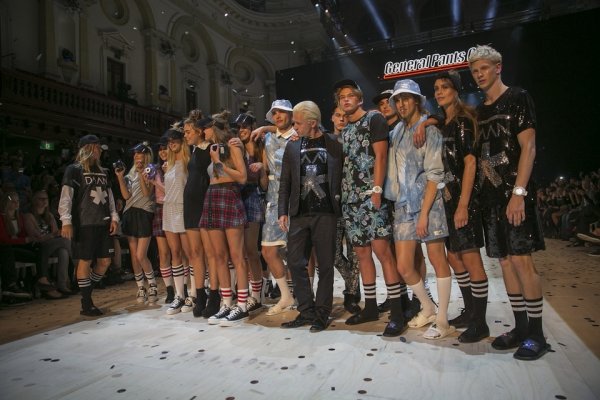 Models eyebrows were thick and brushed upwards to really draw attention to their eyes! The eyelids were painted in bronze diamonds using Eye Studio HyperDiamonds and rimmed with either brown black or ebony black Khol Pencil on the upper and lower eyelid. For the wow factor, lashings of mascara were applied using Volum’ Express the Falsies Mascara.

The Low Slung Ponytail is “a textured low slung ponytail,” describes Richard. “This has a very editorial look and feel.  It’s romantic and sexy and cool”.

“This is a manga inspired topknot that looks equally cool on a boy as it does on a girl,” explain Richard Kavanagh. The androgynous topknot plays with contrasting forms and textures, by keeping the knot tight and compact on the top of the head while the lengths flows freely. The two combined create an edgy hair look with urban tribal accents.

The final style, The Betty Hoop, was inspired “finding a new way to wear a bandana or do-rag and inspiration for the shape was from the forties; and texture and attitude from urban hoodlums’ style of east LA,” comments Richard.