“These are the ultimate home entertainment devices.” – Ashton Kutcher at the 2014 Lenovo Product Launch in London.

Lenovo is the global #1 with over 20% market share, dominating the competition and selling more laptops, tablets and phones than any other tech brand. So why haven’t we them? The answer; they lead the way in Asia and (lucky us) have just released a new range of products for the home user in Australia, the United Kingdom and the USA.

With new products hitting Australian shelves which are set to make an impact, here’s the rundown on what’s new so you can be in the know. (Spoiler alert: there is a tablet with a built in projector!)

THE LAPTOP + TABLET in 1 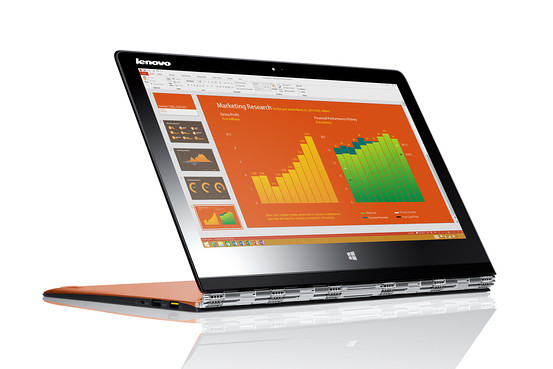 The Lenovo Yoga Pro 3 comes from a fairly new line of convertible laptops. Thin, light and ultra durable, if you’re laptop doesn’t convert into a tablet, you need to up your tech game immediately.

Getting into specifics, this convertible laptop features a touch screen eliminating the need for an additional tablet. This can easily be interfaced with bluetooth headphones for under $100 and the experience can be enhanced. Use the keyboard as a traditional laptop while working, fold it over as a stand to watch movies in bed and transform into a tablet to do some power-online shopping.

Worlds lightest laptop and when open, thinner than a pencil making it the worlds slimmest as well. Weighing at only one kilo, you won’t even feel this laptop in your favourite bag.

If you’re concerned about battery life, Lenovo have included up to 9 hours of power on a single charge; Impressive. 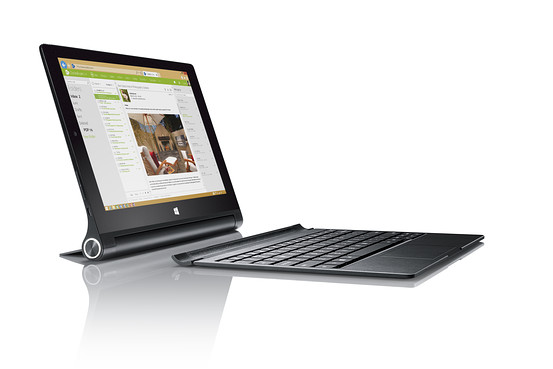 Personally, I’ve become immune to the issues of my current tablet and have grown to accept that all tablets only serve one purpose – to very casually use the apps downloaded or watch a movie while I hold it (maybe to take a photo or two if my phone battery has died!).

Lenovo has introduced the Lenovo Yoga Tablet 2 with an inbuilt battery cylinder and kickstand opening up multiple ways to use it. In it’s traditional hold function, standing up on a counter, propped up in tilt mode or the (newly included) hang feature so next time you run out of bench space, perhaps while cooking, you can hang it from a hook or handle in the kitchen. It sounds silly, but eliminating the need to hold the device makes it more than an ordinary tablet. 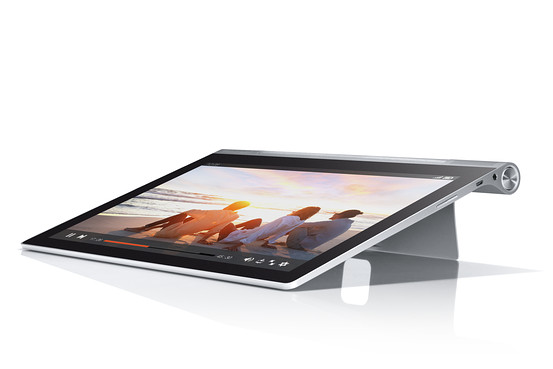 Firstly, the new Lenovo Yoga Tablet 2 Pro, is big: 13.3″ big (screen size of your favourite laptop) and is the first of it’s generation. Lenovo likes the idea of introducing a tablet x laptop (tabtop?) size device with trends showing that people are gearing away from smaller tablets and phones.

That battery cylinder has been converted into a built-in projector turning any dark room into a home theatre while projecting up to a 50″ image on any wall or screen. I have seen it in action and no doubt, this was my favourite product in the line-up. I mean…it’s a projector!

If you’re concerned about sound while watching you’re movies it has numerous built in benefits you can find out about here, or just enjoy that it’s the only tablet to feature a built in subwoofer.

Featuring all the added benefits of the Yoga Tablet 2, the multiple usage modes and 15 hours of battery, this tablet is (frankly) crazy cool.

These are products that are must see and must try. Remember that excitement when the first of the smartphones and tablets were coming out? Lenovo entering the consumer market in Australia, UK and USA marks the beginning of a new generation of products set to impress friends and colleagues alike.

Now that you’re one of the first informed of the move and lineup you can see more here.