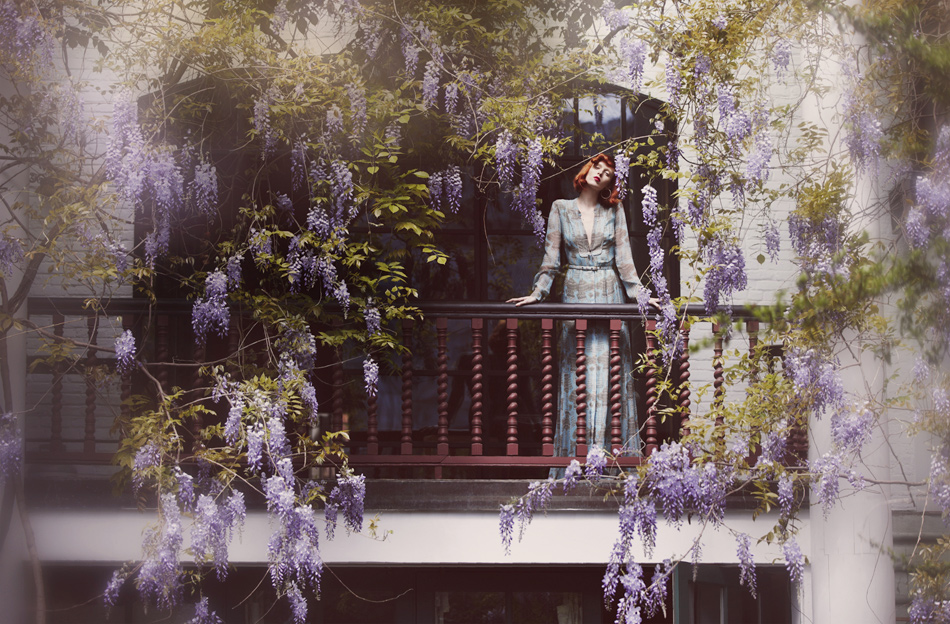 Aracing the pages of online fashion retailer Net-A-Porter, the invincible supermum, singer-songwriter, guitarist and supermodel Karen Elson shares her experiences with fashion, music and motherhood.  Between being discovered at age sixteen, and having her daughter ten years later, Elson has worked with some of the top photographers and designers in the world, extending her career from exotic Tokyo to the shores of Spain, and back into her home of England.

Leaving home at sixteen to embrace a career as a model, Elson established herself as an exquisitely unique entity both behind the camera and on the catwalk. Close friend and shoe designer Tabitha Simmons confides about the young model’s life in New York, “we would go to the deli, and you [Elson] would be decked out in Chanel!” To her defense, Elson humbly explains that the clothes – given to her by Chanel designer Karl Lagerfeld – were the only “nice” clothes she owned at the time.

Self-described as a nomad, Elson has worked all over the world. Her favorite, and possibly most famous shoot was by Steven Meisel, where she found herself without eyebrows on shooting the cover for Spanish Vogue! More meaningfully, the shoot was done on her eighteenth birthday. When asked about her opinion of the industry, the model proclaims, “it means so much to me, honestly. Being in fashion… From the outside, people tend to view fashion as a terrible thing, but it isn’t. Fashion has changed my life for the better. I love it.”

Following the birth of her gorgeous daughter Scarlett, this incredible woman now calls Nashville home. An inspiration to so many women, she has a phenomenal career as a model, taking on motherhood, and is now developing her image in the music industry – all the while maintaining her amazing figure! The overwhelming reception to her musical endeavors, with critiques applauding her “striking vocal skills”, has catapulted Elson into the industry. However Elson has made it clear that the authenticity and passion for singing is what makes a musician – a claim rarely disputed.

Her full interview, including antics with her close friend Tabitha Simmons, are available on the ever captivating Net-A-Porter.com