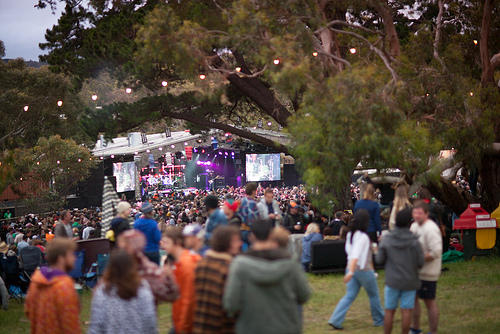 Festivals are pretty much up there as a favourite thing to do for me, dancing in a field with a group of like minded folk, enjoying music and life in general. For a first Melbourne camping festival, what better one to try than Meredith, held every December for three days in the Supernatural Ampitheatre around two hours from Melbourne. And there’s a whole lotta love for it, with my fellow campers telling me they’d been coming for six years.

Boasting its success over 23 years, it came as no surprise then that this weekend approximately 7,000 people descended on the country town of Meredith to see the likes of Tim Sweeney, Tranter, Worlds End Press, Jon Hopkins and the headliners Chic featuring Nile Rodgers after gigging around the city over the past week.

Having been to a festival every year for the past four or five years myself, it was actually refreshing to not know much of the line up. Time was spent just listening to whoever we happened to be watching, dancing, having fun with friends and getting to know a bunch of people I’d never met before rather than rushing from one end of a field to another.

Meredith’s weather held out after rain threatened the long awaited Melbourne summer on Friday night, to reveal glorious sunshine on Saturday and Sunday. Styling was key throughout the festival, from Boho outfits to fancy dress, glitter and the odd birthday suit or ten in the Meredith gift.

The food was good too, sampling some of the recommended fritters with scrambled eggs, rocket and avocado. Not forgetting the infamous Meredith goats cheese washed down by a bloody mary at Erics Bar.

Chic and Nile Rodgers were the highlight, cracking out the hits of seventies disco, Freak Out, Everybody Dance and Greatest Dancer along with uber hit Daft Punks Get Lucky. When Chic sang “We are family” – everyone was even if just for a simple five minutes.