“Jayson was inspired by all things Rio De Janeiro, a sexy, wet, bronzed goddess that dunks sexy. It is not that light peachy bronzy look, we want to give these girls some depth, so we are using all different shades of chocolate.” says Nicole Thompson from M.A.C.  The focus was on eyes and the look was created using the Coffee pencil and Costa Riche pencil to create an elongated chocolate coloured eye where the colour was used to fill in the whole eye and blending it through to the brow. A glossy finish using Cinnamon Lip Glass was brushed over the top of the lids and extended through the brow to create a glossed look.

“Referencing the midnight beach culture of Rio and drawing heavily on Bruce Weber’s portraits from the 80’s and 90’s, we created a sexy, after hours feel for the Jayson Brunsdon woman,” says Redken Hair Director, Richard Kavanagh.   “With her hair wet and free as if fresh from a skinny dip, she is ready to dance all night,” continues Kavanagh. Key products to create the look included Redken Diamond Oil to give the hair softness before applying Redken Rootful 6 lifting spray and Guts 10. The hair was finished with Redken Shineflash 2 Glistening Mist to give extra lustre. 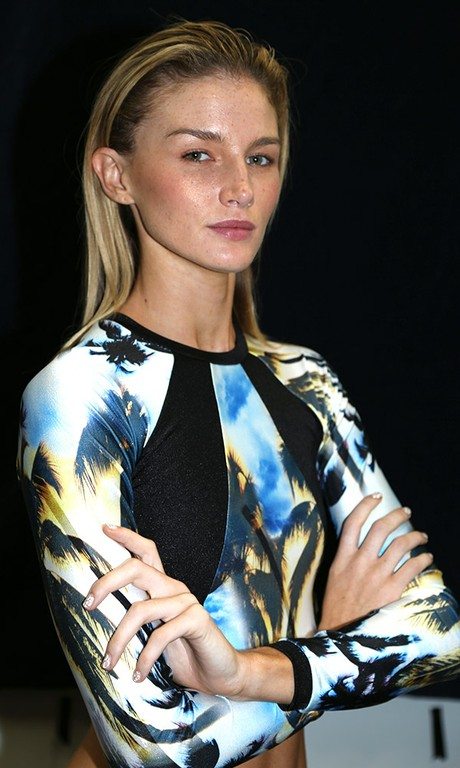 Maybelline New York Makeup Director, Nigel Stanislaus’ inspiration came from the show’s creative director, where the girls should be “beautiful, warm and illuminated”.  Maybelline New York BB cream was used on the face first to provide a neutral base, with a little bit of Colour Tattoo Eyeshadow in  Too Cool on eyelids.   FITme bronzer in Terracotta was added to the face to give warmness. Brown mascara was added to the bottom lashes and Baby Lips were applied to lips to give a soft lip look.

Klara Cosmetics created a luminous, beautiful look for Betty Tran’s show, complementing the couture like gowns of the collection. Skin was kept matte and natural with a strong brow. The focus though was on the eyes, with glitter on the lids and a shimmer lipstick.

Paris noir, flapper style details and mirror like shine were key to Redken’s Jon Pulitano’s artistic hair look for Betty Tran.  “The inspiration for the hair was Paris Couture. Betty’s collection is inspired by Paris and spring flowers…I wanted to give the look a polished structured feel but at the same time bring a modern futuristic element into it and not make it too soft,” comments Jon Pulitano. 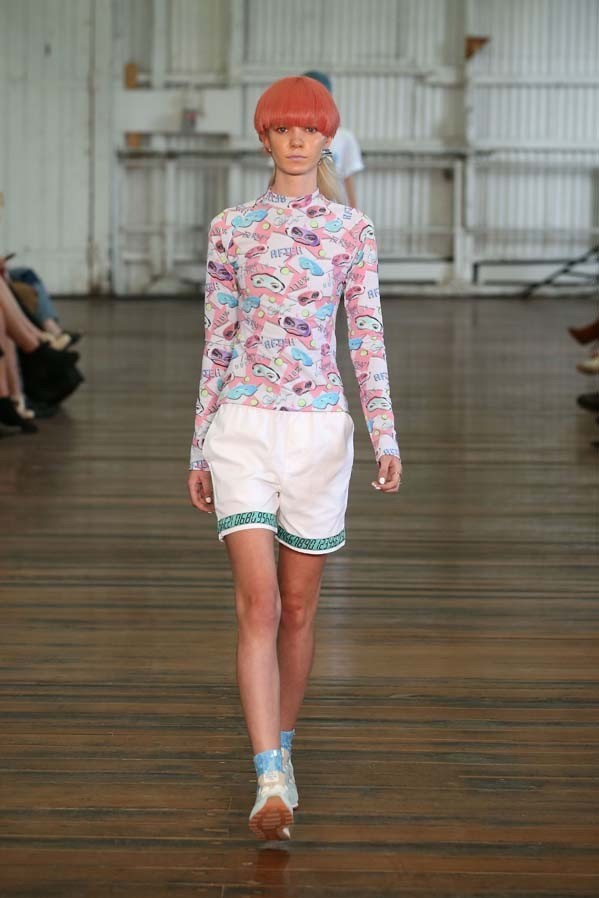 Nigel Stanislaus from Maybelline New York  took inspiration from 90’s TV shows such as Saved by the bell and Beverley Hills 90210 for his makeup look at Emma Mulholland. “There was freedom and happiness with how they wore their make-up because the economy was better and it was optimistic” says Stanislaus. Coinciding with the grunge era, the look is a bit grunge. No foundation was used on the face, with spot concealing with BB Cream. The focus was on lips with three different lip looks in lilac, pink and coral.

“This year’s collection at Emma Mulholland is based on the 9 -5 girl who just wants to have fun and we’ve really taken this concept through to the hair. The natural hair has volume and texture, with some movement through the length. We’ve then offset the natural hair with a contrasting bright pastel coloured, blunt cut, eye-lash grazing wig which has been shaped for each girl. The look is inspired by a typical ‘Chelsea girl’ – really playful, as that’s what the Emma Mulholland girl is all about.” says Alan White from ghd.

“This look is all about luxury. We want to make that smoky eye and turn it into something modern and international. She looks like she can actually afford things – we want that classic smoky eye with a lot of depth into it.” says Nigel Stanislaus from Maybelline New York.

Bad to the Bronze Colour Tattoo Ink was used on the eye and also Liner Express on the inner rim and the top lash. Colossal Smoky Mascara was applied three times on both the top and bottom to create a spiky and sexy look. “The face had beautiful bronzer applied and also FITme blush on the cheeks, finishing off with Honey Beige Stipped Nudes lipstick applied to give shine” says Stanislaus.

Hypnotic waves were on the hair agenda for the Swarovski show  with Redken Hair Director, Paloma Rose Garcia, capturing the beauty of unkempt movement and body in hair to help showcase the stunning, glistening Swarovski collection. “There’s a very natural finish in the hair. Not too shiny not too matte, just natural. The hair is blow dried first then tonged for a natural tousled look. The waves aren’t overly polished, instead they have a more beachy look with soft shape definition,” explains Paloma Rose Garcia.