As one of China’s most successful graphic designers, Nod Young has a unique style that is all his own. Easily identifiable, Young’s designs are a lesson in dynamic contours, passionate colours and rhythmic layout. He has his own voice which he explains is really important as a designer “I must have my own style to explain [what’s in] my mind. [All] the great artist and designers I see have their own language. That’s very important.”

While Young has gained commercial success, working with many international clients, including NIKE, Adidas, Coca Cola, McDonald’s, Nokia, Microsoft, FIAT, Disney and Greenpeace, he is adamant that its important for designers to maintain a sense of integrity. He’s all too aware of the trap that many designers face when their vision is compromised by big corporates. Young used to work in an advertising firm but “Advertising is not design”, he says. “It’s like a service.” Frustrated with the lack of creative freedom he had, he subsequently left to found his own studio. “We do very pure design”, he says. “It’s not commercial. It’s very interesting. It’s more about the creative.” 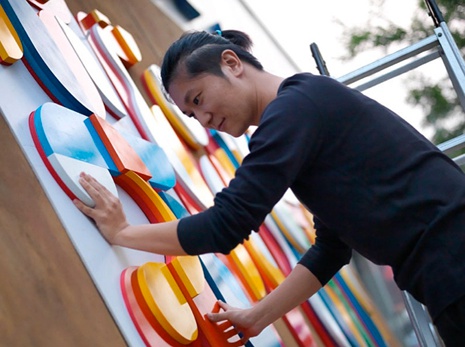 “Many emerging designers, particularly in China, depend on computers; they forget that 80% of good design is idea formulation and the concept behind the design itself,” says Young. He is aware that the industry has changed during his time. The market previously demanded designers that were proficient in more than one area e.g. lettering, formatting and web design.  “Nowadays, designers with a distinct personal style in a specialised field are more popular”, says Young. To stand out in the industry, Young stresses the importance of having your own style. It’s when you stay true to your own language, that you’ll be successful. “Your language is yours. It’s always yours. It’s a gift.”