Making desserts is something that I’ve always shied away from. Unlike savoury dishes where I can generally throw things together, desserts require precise quantities and technique. So when I was invited to learn from a professional, I jumped at the chance. I mean, how often do you get the chance to learn how to make desserts from an expert? 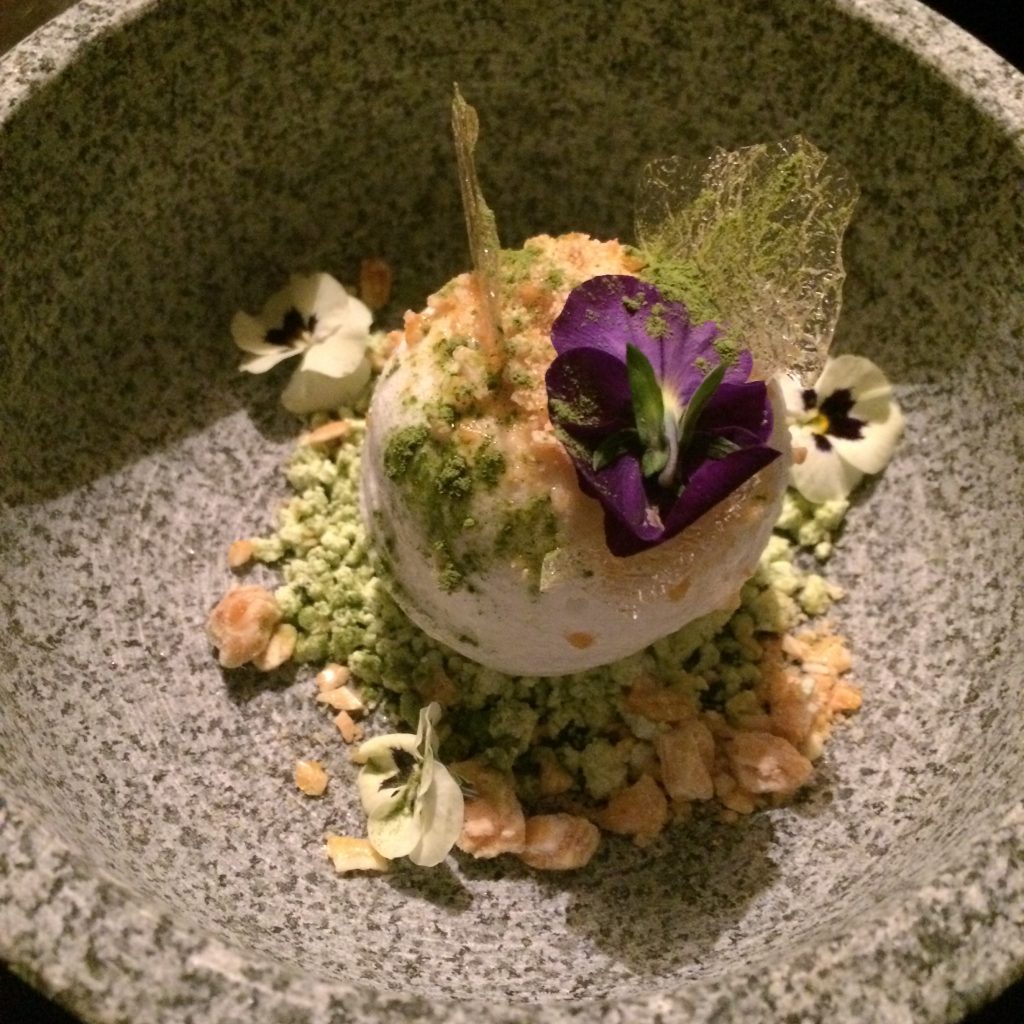 So on a wintry Melbourne evening, I headed down to Sake Restaurant and Bar  to get my chefs apron on and make the perfect dessert. Sake’s Executive Chef, Wayne Brown greeted us in the special classroom with not only an apron but also protective goggles. Interesting….more on the goggles later. 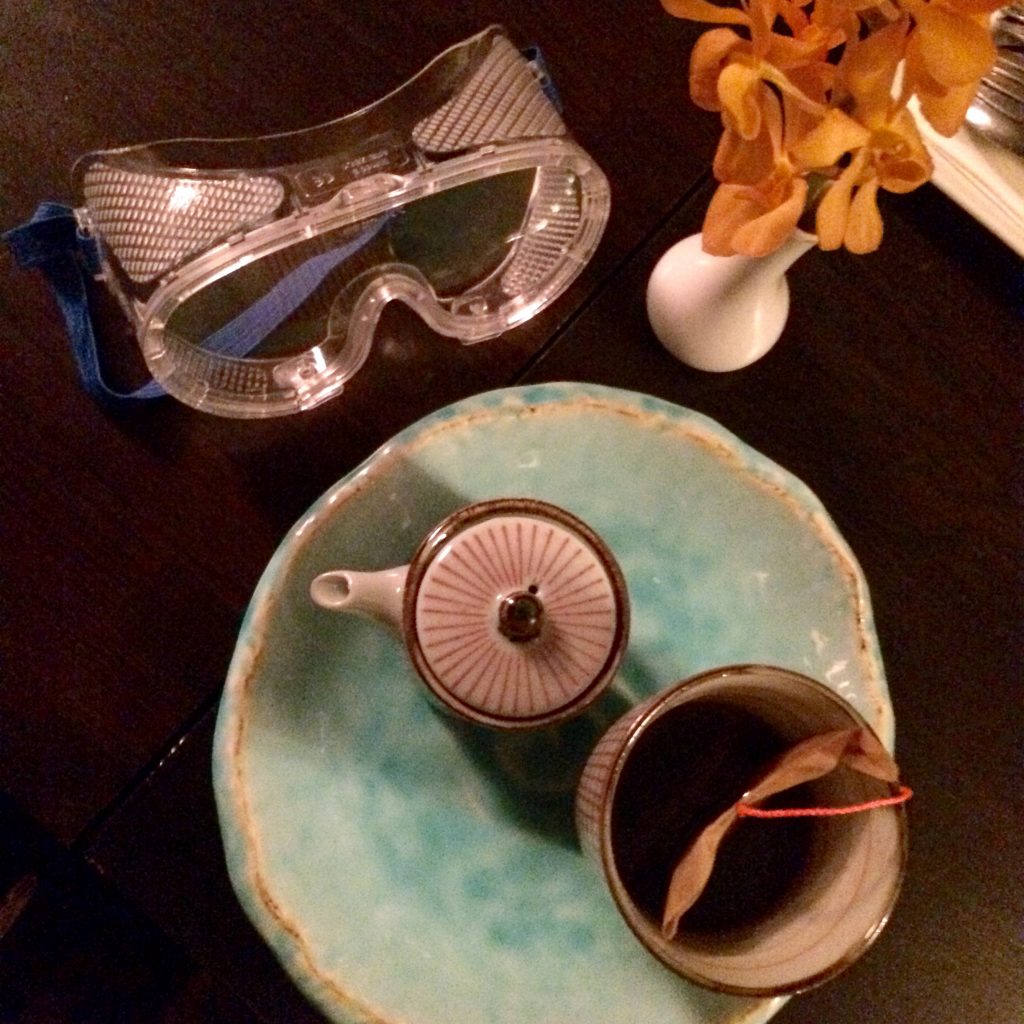 Whilst we waited for the other guests to arrive we were treated to some of the delicious and creative new cocktails for the Winter season including a warm mulled wine cocktail and a mandarin martini. Encouraged by Wayne to enjoy more of the cocktails, perhaps we were a bit intimidated by being so close to a food master and were quiet, we enjoyed a few more delicious cocktails until we were all there. Then it was goggles on and spoons at the ready!

So we were probably a bit eager with the goggles and didn’t require them at that point so they came off, but aprons stayed on and we all gathered around while Wayne explained the dish we were cooking. A meringue snowball with whisky ice cream on a bed of green tea cream crunch and almond praline.

Wayne started with making an almond praline. Sugar and water combined in a saucepan was put on heat and gently swirled around to blend. Wayne warned that you needed to be very careful and monitor the colour of the mix so that it didn’t cook too much and become bitter. He warmed it to a balmy 150 degrees (warning not to touch the mixture with your hands!) until it was a beautiful golden colour and poured it over a tray of chopped almonds and left them to cool. 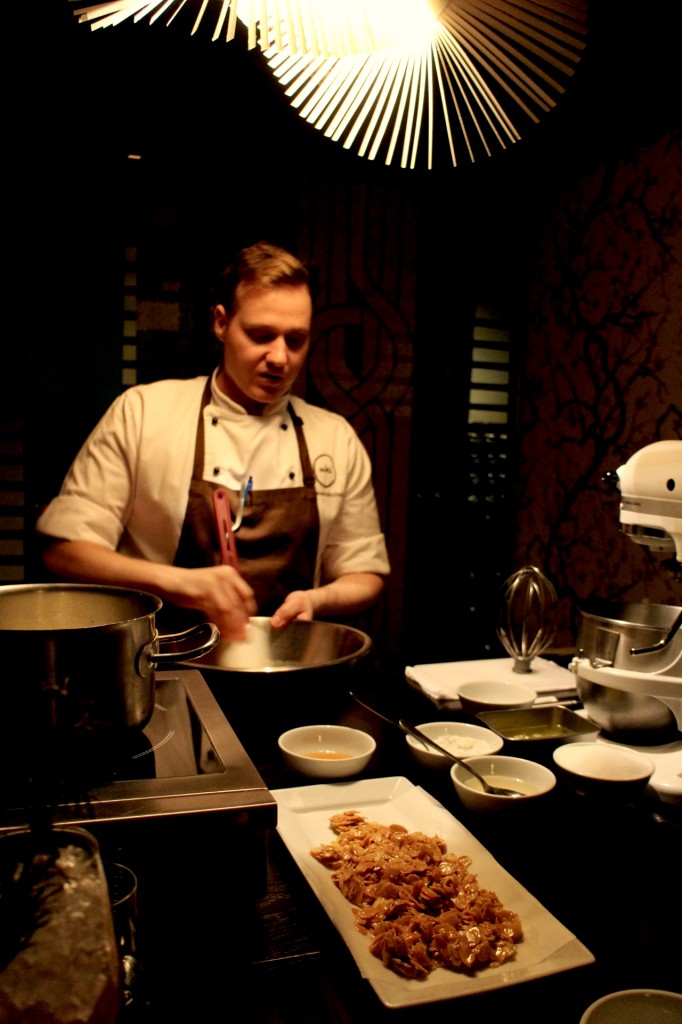 The next part of the class was making ice cream. Who knew it was so easy to make ice cream? Cream, milk, sugar and egg yolks with a dash of Japanese Nikka Whisky. Ok it was more than mixing all those together in one go but I shan’t bore you with the details. Suffice to say, I managed to get my hands “dirty” by mixing the ice cream mix over a bowl of ice to cool down the mixture so that we could add the whisky and ready it for churning into ice cream. 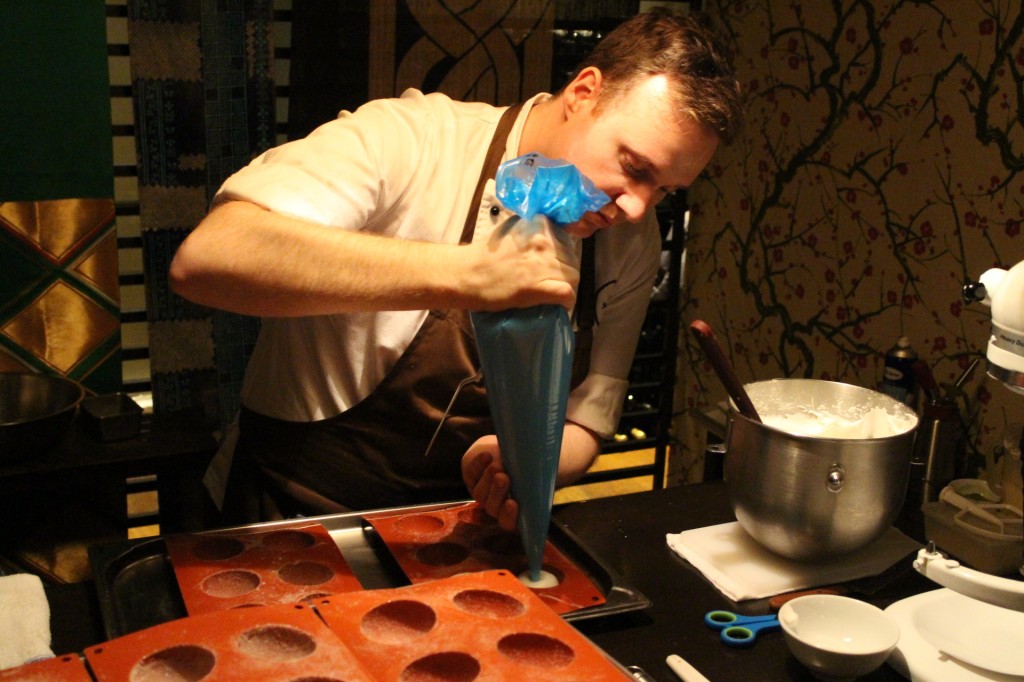 Now to the main part of the dessert, the poached meringue. This beautiful and delicate meringue was created by beating egg whites in a mixer until soft peaks form and then slowly adding sugar in three stages along with cornflour and vinegar. The mixture then moved into a piping bag and piped into pre-buttered dome molds. We were tasked with piping the mixture into the molds and smoothing the mixture so that there were no air pockets. Surprisingly it was actually harder than it looked to begin with but after doing a few they started to look like the ones Wayne had made! These were popped into a steamer for two minutes and cooled before they were removed from the mold. 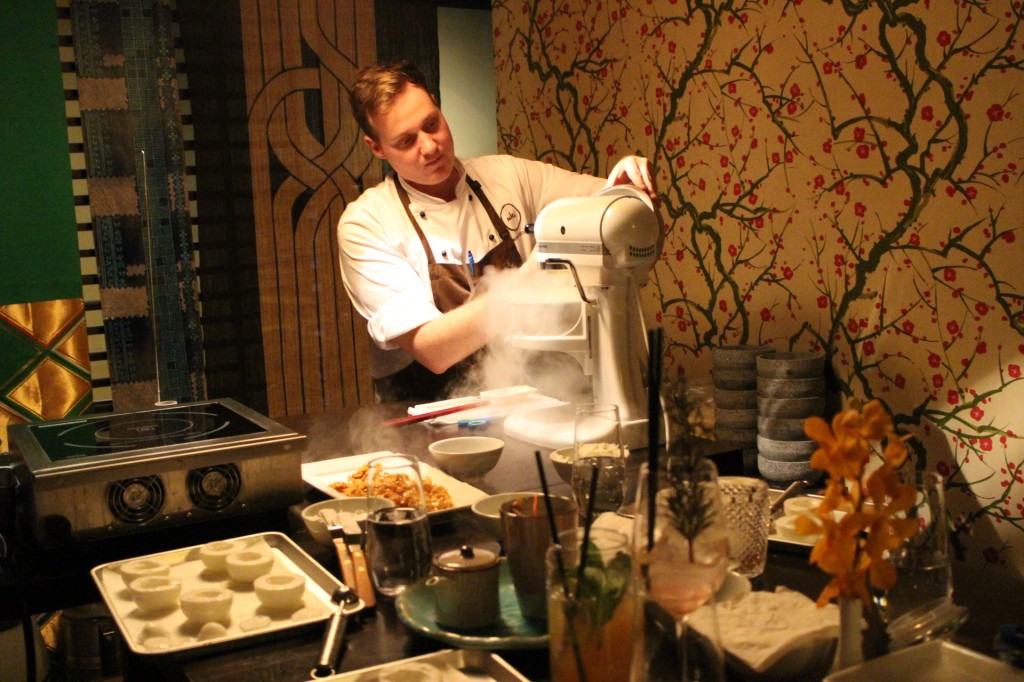 We were each tasked with putting together our Meringue Snowball dessert by scooping hollow the inside and filling it with the whisky ice cream. Taking another half dome and putting it on top to create a dome. We popped the almond praline on the bottom of the dish along with the Green Tea cream crunch and popped the meringue snowball on top. Decorated with edible flowers, our dish was the picture of perfection! 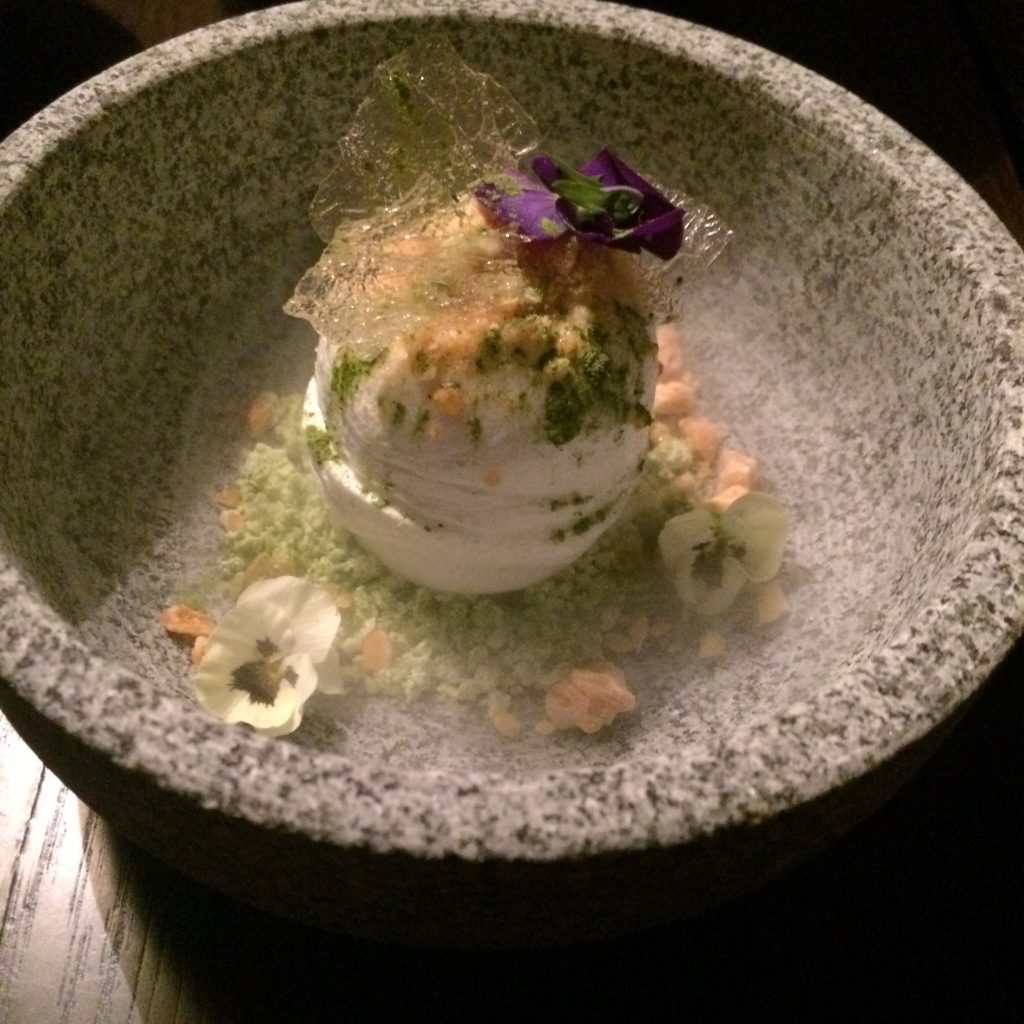 I have to say the experience was so much fun. Part classroom and part action, it was a good balance of getting your hands dirty and involved and half learning enough to recreate the dessert at home! I have yet to try it but when I do, I’m sure you’ll see in on Instagram!

Sake Melbourne will be running a range of masterclasses and special dinners for the rest of Winter including the Japanese Boilermaker Masterclass ($75pp) on Wednesday 12th August where you can make unique cocktails or you can attend the Domain Chandon Winemaker Dinner ($120pp) on Wednesday 5th August to enjoy an intimate dining experience with Domain Chandon’s winemaker.

Tickets to all winter events at Saké can be purchased online at www.sakerestaurant.com.au/whats- on/winter-at-sake-melbourne or by calling +61 (2) 9259 5668