Melbourne certainly turned on the weather for this year’s Derby Day, with the sunshine proving to be the perfect backdrop for a unforgettable day of racing and fashion.

British Style Icon and Chanel Ambassador, Poppy Delvingne was one of the main drawcards of the popular Lavazza marquee. The charming and down-to-earth Delvingne who looked resplendent in a custom J’Aton Couture dress and Dolce & Gabbana crown, took the time to mingle and chat with guests. This trip was Delvingne’s first time in Australia and she said she was having such a great time, she would love to come back next year. 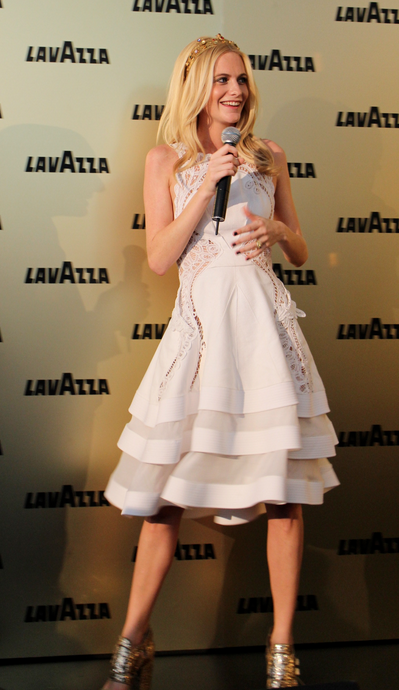 Former Spice Girl Mel B was also another major guest for Lavazza, spinning the decks with her new single and chatted the crowd about her spring-racing fashion and about how much she loved Australia. She showed off her toned physique in a form-fitting black and white gown, sticking to the traditional colour scheme of the day. 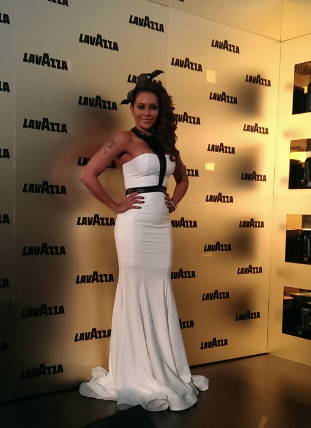 Lara Bingle was also a special guest of the Lavazza, sans boyfriend Sam Worthington who was overseas filming. Fond of daring racewear, Bingle didn’t disappoint this year, with a racey Dion Lee outfit. Bingle, not seeming to be a fan of traditional race headwear, famously rocking an ear cuff in the past, chose a headpiece by up-and-coming designer Ryan Storer to complement her all black outfit. 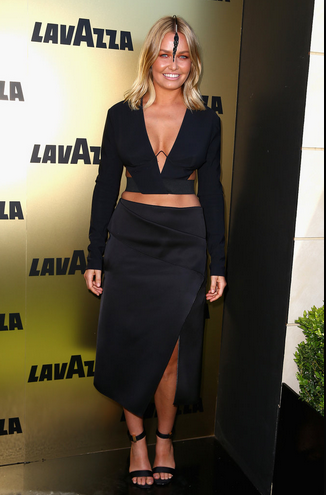 Melbourne blogger and style icon Nadia Coppolino, dressed in a stunning Josh Goot dress with strategically placed cutouts, was the exclusive Lavazza Style Insider and #LavazzaLook Ambassador on the day and for the rest of the carnival, capturing all the action and fashion in the Lavazza marquee. Espresso flavoured sorbet, delicious Italian canapes and refreshing cocktails and mocktails kept guests cool from the hot sun. 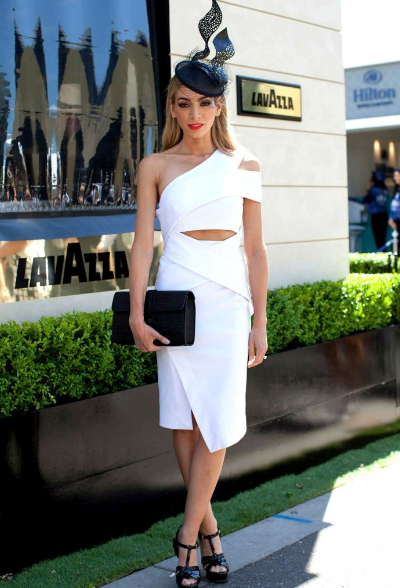 Rebecca Judd was joined by her husband Chris in the Lavazza marquee. Judd dressed her growing baby bump in a custom J’Aton gown. Despite not being able to enjoy the champagne on offer, Judd spoke about how she was enjoying her first time in the Lavazza Marquee. 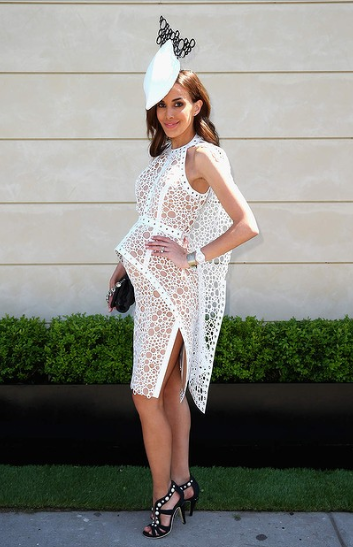 The Myer marquee was Australiana-themed, with beautiful native flower displays and traditional Australian foods such as pavlova and hot chips served to guests, which was a welcome relief after a long day in the sun. The DJ was joined by a live saxophone player who helped get the party started, getting the crowd on their feet and dancing, turning the marquee into a big dancefloor.

Myer Ambassador Jennifer Hawkins was in attendance with husband Jake Wall, and certainly stood out in a sea of black and white, donning a custom Toni Maticevski leather creation. Couturing caught up with Toni, who was up late the night before Derby Day finishing off outfits for some of the most fashionable attendees at the races. One of the nicest people in fashion, Toni certainly outdid himself with Hawkin’s bondage inspired gown. He also dressed the always stylish Lindy Klim, and model Tanja Gajic. 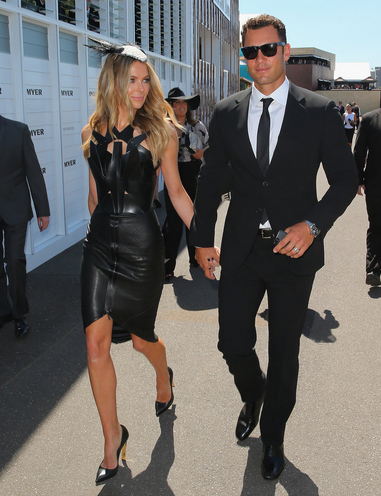 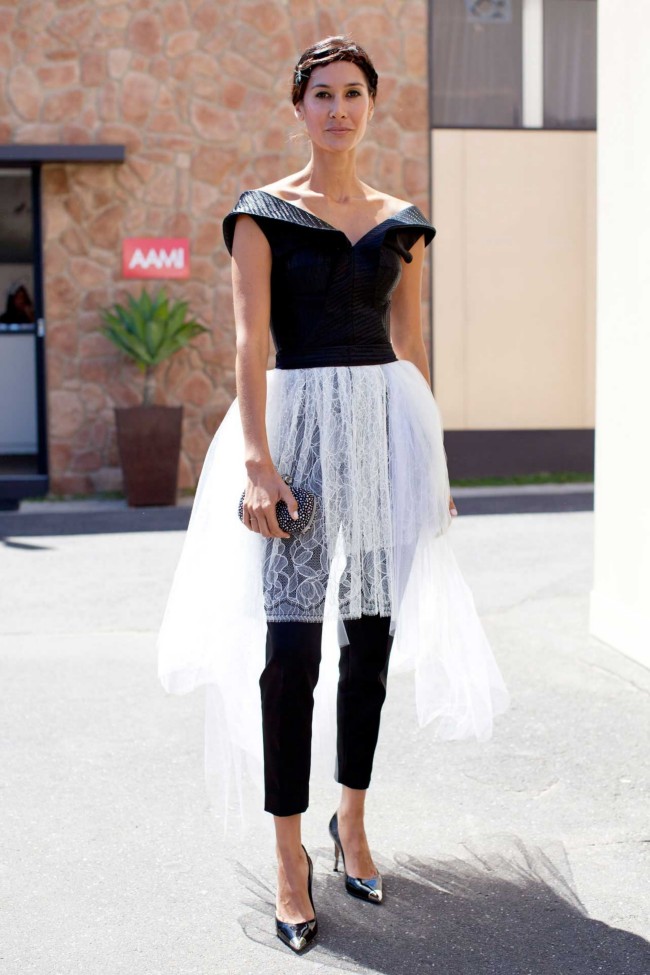 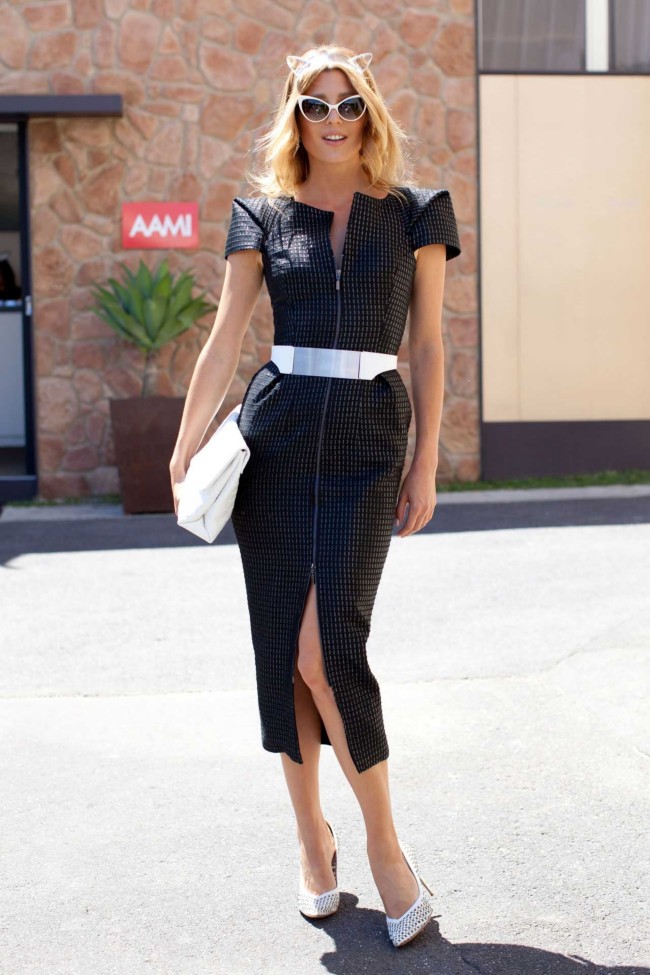 One of Australia’s most popular couples, Hamish Blake and Zoe Foster Blake also enjoyed the live entertainment in the Myer marquee. Having announced their exciting news that they were expecting a baby the day before, the pair were flooded with well wishes. Despite suffering from morning sickness, Foster Black said she was doing well and both her and Hamish were very excited about the baby. Hamish’s partner in crime, Andy Lee was also in attendance at the Myer Marquee, along with Carrie Bickmore, Liz Cambage, Lindy and Michael Klim. 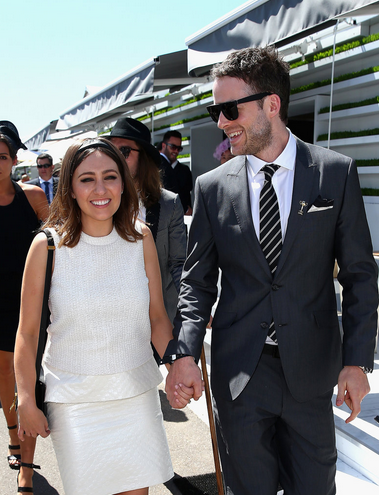 The Bachelor, Tim Robards, turned up the heat in the Emirates marquee. Just as charming off screen as he is on screen, Tim was enjoying his first time at the races, and happily posed for snaps with his adoring fans.

Guests dined on traditional middle-eastern treats such as baclava and dates, which complimented the luxe interior decorated with beautiful lanterns and lush floral arrangements.

Lance Franklin and girlfriend Jesinta Campbell also enjoy the plush interior of the Emirates marquee. Campbell, recently named ambassador for Harris scarf, accessorised the brands skirt and shirt with a YSL pussy bow and a Suzy O’Rourke visor which had fans divided on social media. 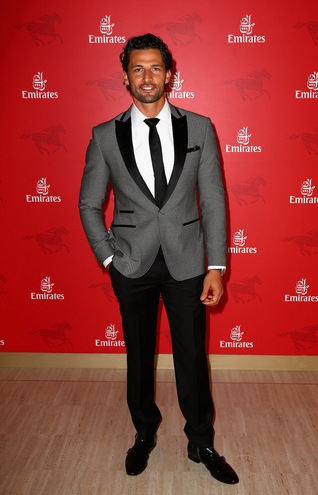 The ageless Naomi Campbell leant her star power to the Lexus Marquee, showing off a figure women half her age would kill for in a strapless Dior houndstooth number. Despite being one and a half hours late, Campbell showed none of the diva behaviour she has become known for, and instead was the perfect guest. 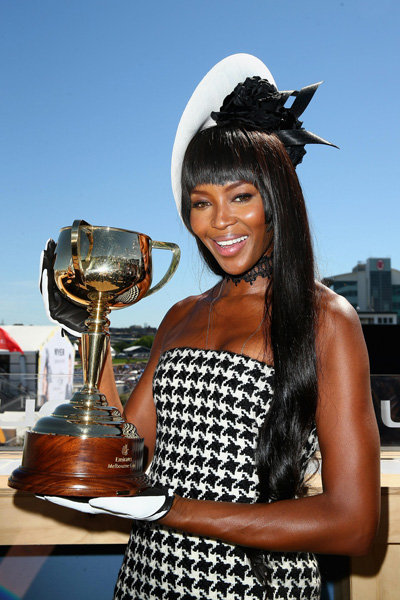 Senior Vogue Editor and Style Icon Christine Centenera was also spotted out an about enjoying the sunshine with partner and one of Australia’s top fashion designers Josh Goot. 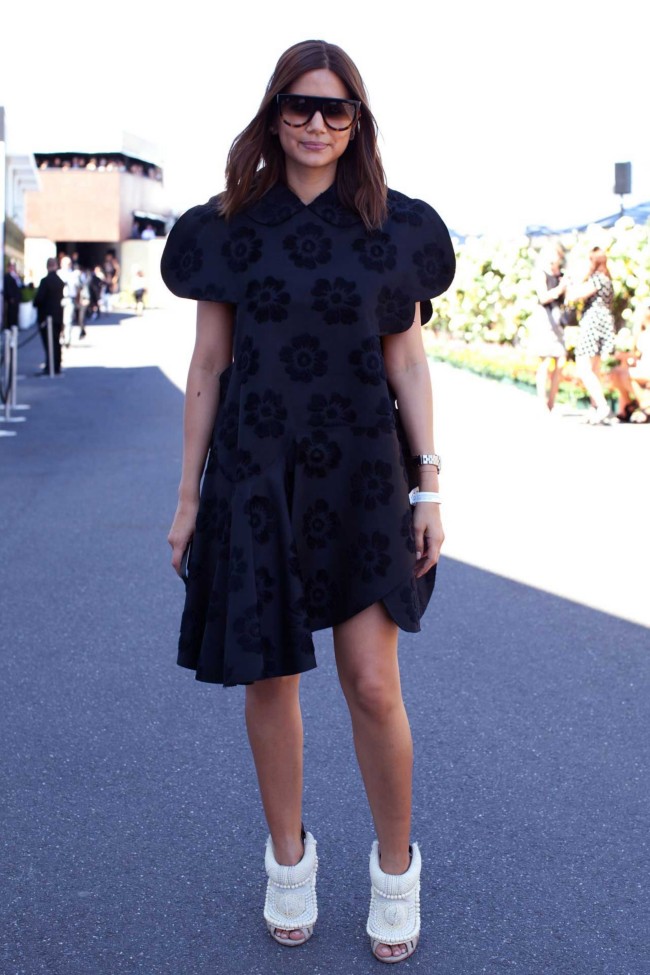 Racing royalty and race-going regular Kate Waterhouse shone in a backless number from Balenciaga, with a delicate headpiece by Nerida Winter toping off her classic outfit. 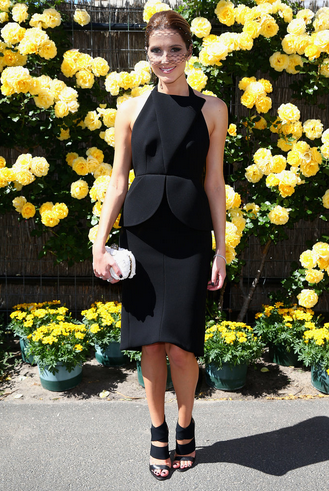 Derby Day was certainly the perfect way to kick off the official events of the Spring Racing Carnival, and Couturing are looking forward to the excitement and fashion the rest of the carnival is set to bring.