I spent Spring travelling around the north and east coast of Spain. It was my first time in the country, and like many tourists, my romantic notions sprang from a combination of home-made sangria and close ups of Javiar Bardem but you need to consider what you are going to do on your holiday as there are so many options. We love big packages like this one which are just brilliant as they give you so much to do on your holiday.

The two regions that I explored were Basque Country and Catalonia. Both regions are fiercely nationalistic and desire autonomy from Spain. Part 2 of this article is concerned with Catalonia and provides tips and hints for any tourists new to the region.

Catalonia’s separatist history is less violent than its Basque neighbour’s, but no less passionate. As Spain’s most lucrative region, Catalonia’s primary grievance with the Government is fiscal; many Catalonians believing that their region receives scant benefits despite subsidising the rest of the country. It’s an exciting time to visit Catalonia: public rhetoric is feverish, the “out-of-touch” King, Juan Carlos, abdicated in favour of his son and a referendum for independence will be held later this year.

When driving around Catalonia, we stopped for lunch at a hole-in-the-wall in Figueres. There we struck up a conversation with a near-deaf local who, despite never having visited England, spoke English with a remarkable Oxford accent. The man was dining alone, indulging in a bottle of red and a three-course meal. Overcome by excitement at our interest in his region, he broke out into a Catalan folk song, even forcing the waitress to sing a few lines with him. When finished, he got out of his seat and left the restaurant, only to return moments later with a book detailing the history of Catalonia. Half propaganda, half sonnet to a forgotten time, the book was wildly entertaining and helped to frame our experience of the region. When travelling to Catalonia, make sure that you read about its rich history – the locals will be very impressed. 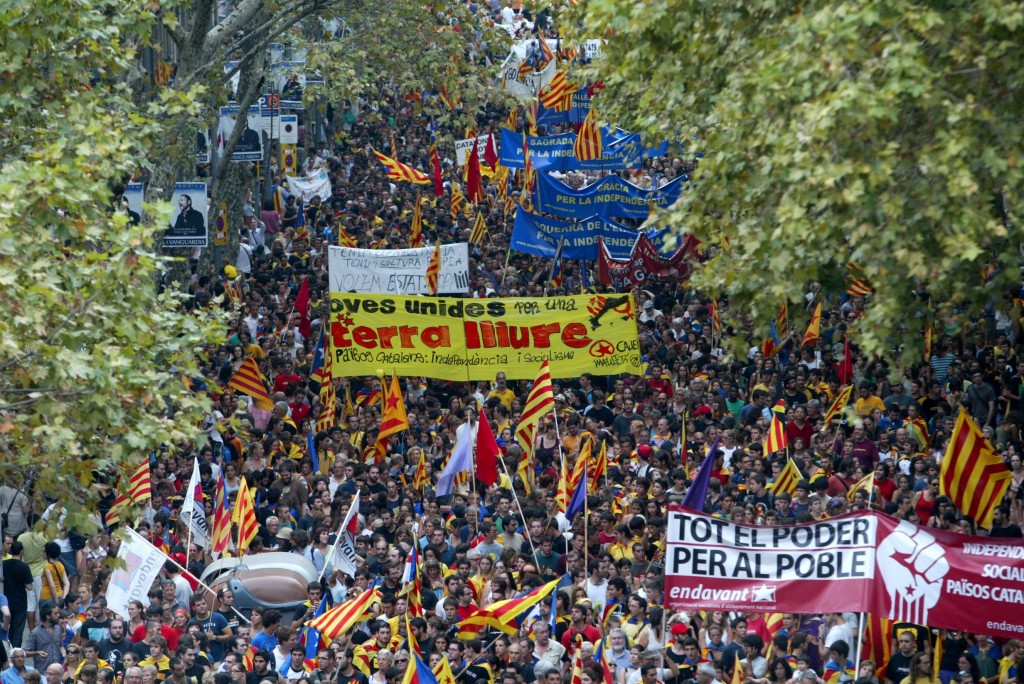 Barcelona is the cultural capital of Spain. Renowned for its architecture, modern art and nightlife, it is one of the most exciting cities in Europe. Exploring Barcelona is like unwrapping the city’s history; each neighbourhood devoted to another period in time: central is Barri Gòtic (the Gothic Quarter), a monastery stone labyrinth of twisting alleyways; to the north in Eixample, Gaudi left his Nouveau mark; west is El Raval, a once dodgy hood that has been gentrified into a hipster haven; and east along the shoreline is sprinkled with 21st century delights like shopping malls and state-of-the-art sport stadiums. This is a city best explored by foot. 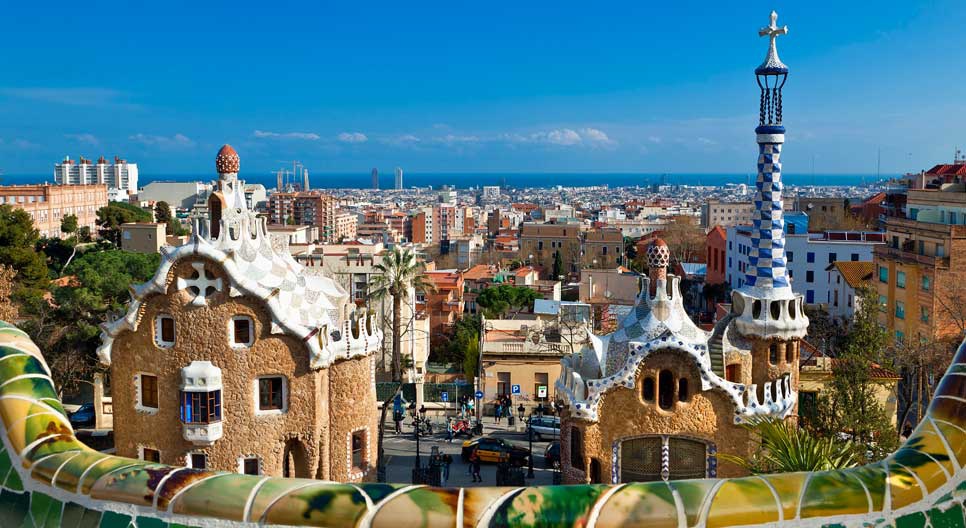 Barcelona is an open-air gallery with public sculpture scattered throughout the city. Below are some of my favourite places to get my art on and take those touristy photos: 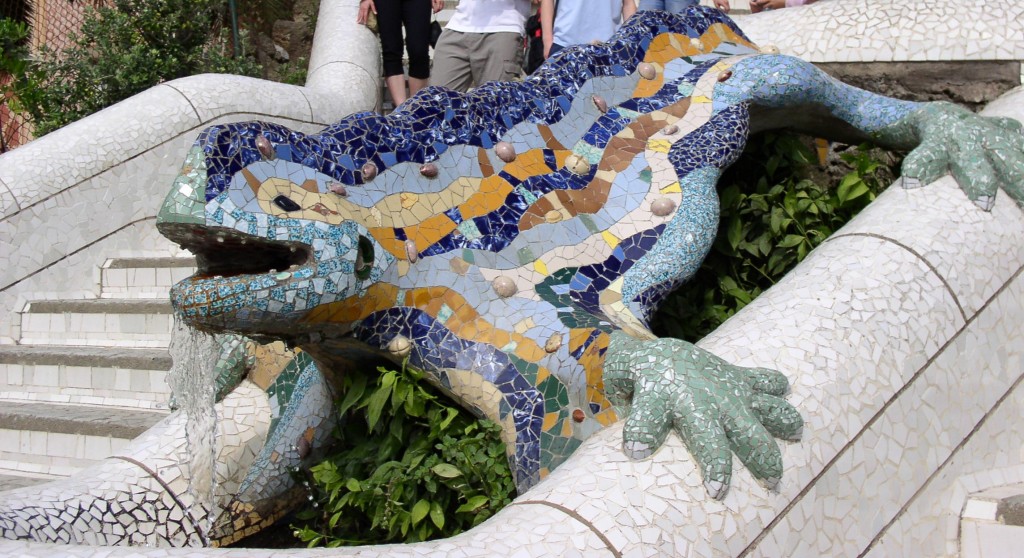 The El Raval Cat: This cat, by Columbian artist Fernando Botero, has become an icon of the neighbourhood and should be visited by all Couturing‘s feline-obsessed readers. 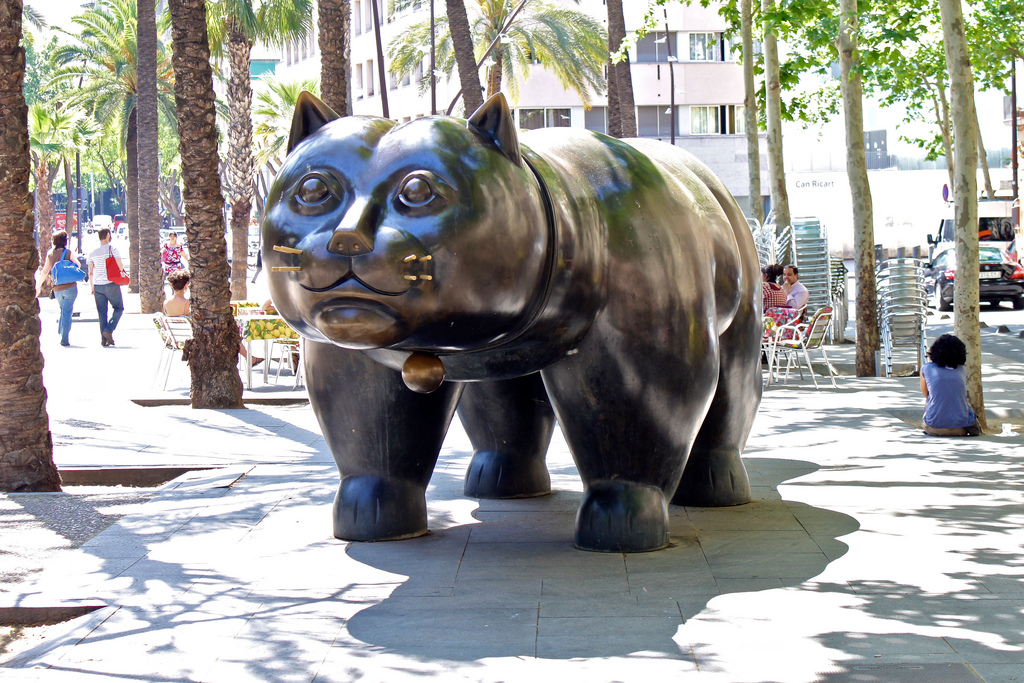 Dona i Ocell: Perhaps Joan Miro’s most famous piece. This sculpture by the Catalan artist stands 22 meters high in the park dedicated to him. 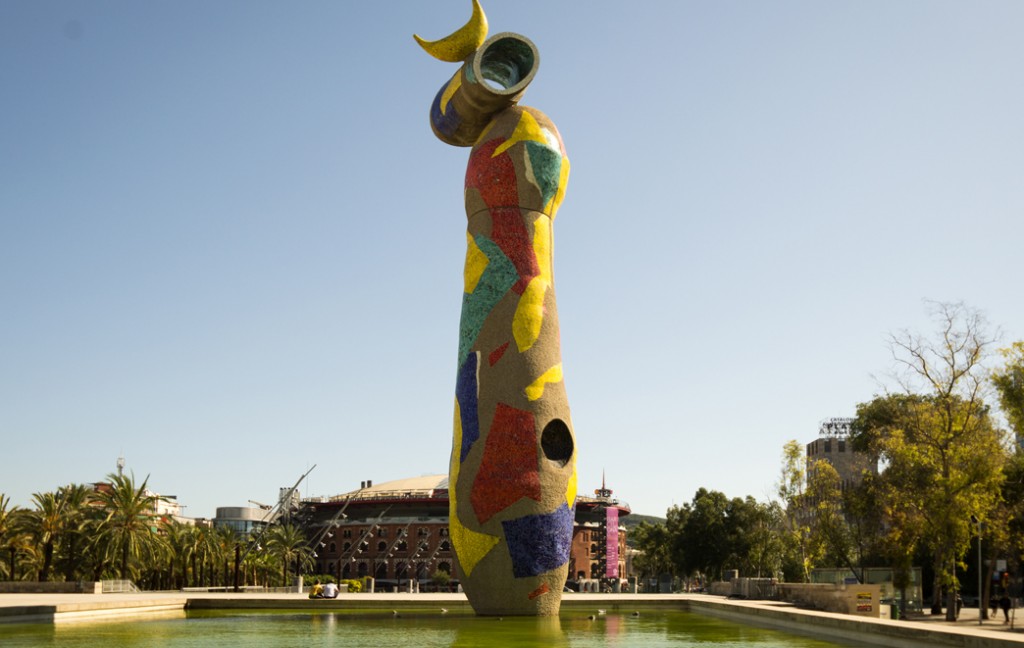 After a day exploring this intoxicating city, the best way to unwind is with drink in hand, staring down at the city’s light-spattered expanse. Barcelona has embraced the rooftop bar, with many boutique hotels now opening these spaces to the public. Between six and ten, Barcelona’s rooftops are pumping with live music and the mingling pre-dinner crowd. As dinner is eaten rather late in Barcelona (usually after 10pm), I recommend rooftop hopping to while away the hours, just remember that high altitudes thin the blood, which can lead to outrageous flirting. Below are two equally trendy rooftop bars with very different vibes:

Hotel Pulitzer: This bar is known for its acoustic music, laid-back atmosphere and crowded dance floor. 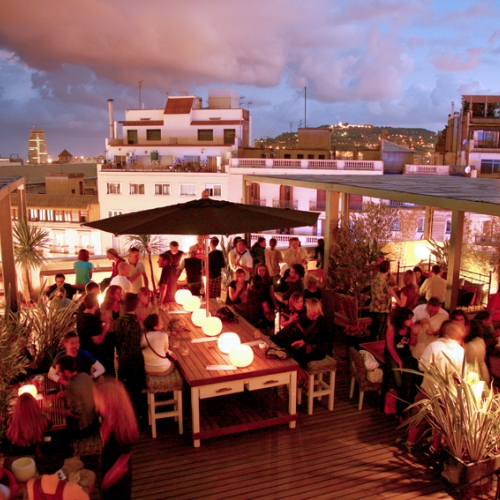 Hotel Ohla: This rooftop is known for it chic clientele and extraordinary design. Be sure to order one of their extravagant cocktails. I also highly recommend the hotel’s restaurant, Ohla Gastrobar, which serves high-end tapas – an absolute treat. 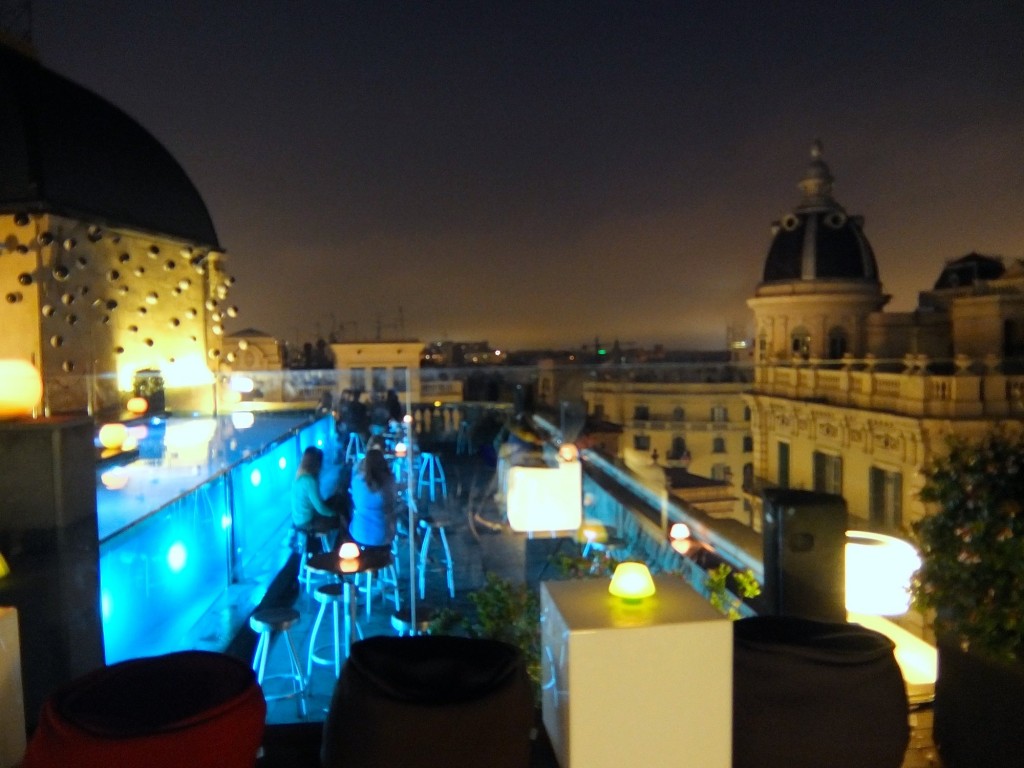 Don’t get me wrong, but sometimes, occasionally, one may want to eat something other than tapas. There! I said it, it’s in print. If this is the case, and you find yourself desiring something other than local cuisine, there is no better Spanish city to be in than metropolitan Barcelona. The city has a diverse culinary tapestry, which has been highly influenced by expats from North Africa and the Middle East.

For a non-Spanish meal I recommend Ziryab, an Arabic restaurant hidden away down a cobblestone alleyway. The décor is ornate and the lighting intimate. Be sure to order the Hanging Brochette – carve-yourself meat marinated in a tangy sauce. 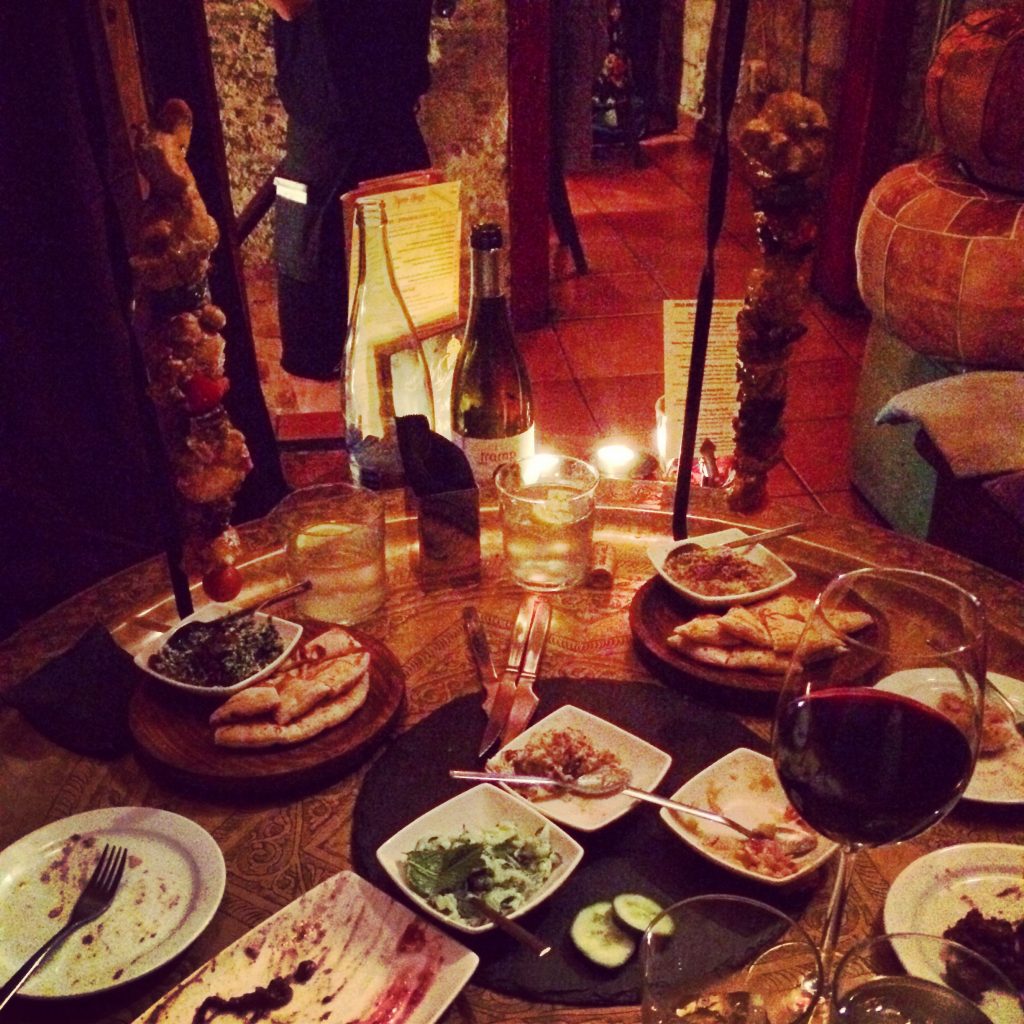 North of Barcelona is Costa Brava, a coastal area that stretches to France, known as the Wild Coast. Compared to other Mediterranean towns in France and Italy, those on the Costa Brava are relatively untouched, ensuring their quaint and romantic character. When travelling around the Costa Brava be sure to rent a car (preferably a convertible) and travel the winding roads at your own leisure. 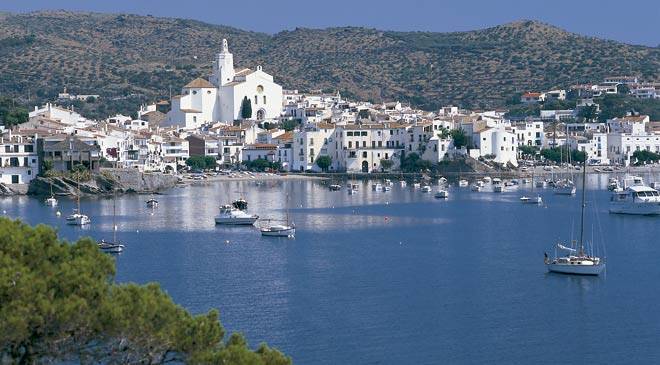 This grand hotel stands atop a cliff overlooking S’Agaro bay. In it’s heyday, La Gavina was home to celebrities and socialites like Sinatra, Elizabeth Taylor and even that notorious King, Juan Carlos. Admittedly, La Gavina and S’Agaro, like their Old-Hollywood patrons, are no longer in their prime and have now become popular with the new-moneyed Russians. But the hotel’s bones are still there, its lavish interior and horizon pool. So whilst La Gavina may no longer be in vogue, its still a breath-taking escape with a fascinating history. When staying at La Gavina, be sure to walk along the cliffside and swim in one of the secluded rock pockets that hug the shore. 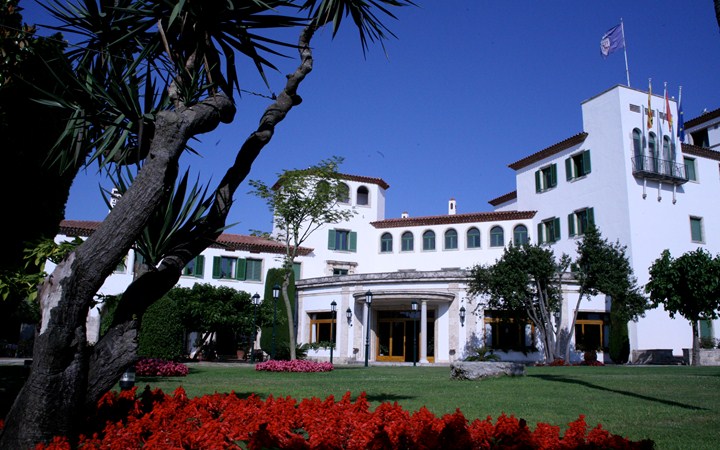 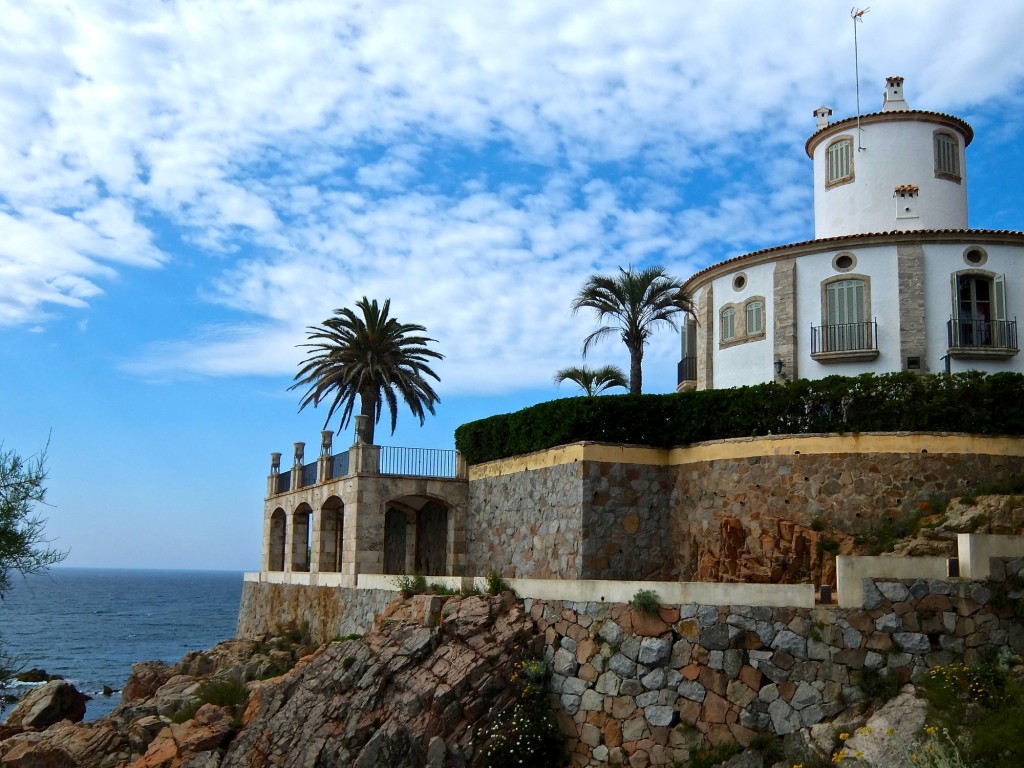 During our stay in S’Agaro, we felt the restaurants along the promenade were touristy and overpriced. So we got in our car and drove inland in search of delicious authenticity. Thank God we did because we stumbled across what was potentially the coolest dining experience on our Spanish road trip. 5 minutes away in Sant Feliu de Guixols is El Rey del Jamon, a family-run bistro that’s ceiling is covered in hanging pig legs. There are no frills here, the menu specialises in meat and each dish comes with bread smothered in tomato and garlic. Be sure to order the Black Hoof Pig, it’s a salty delicacy that melts on your tongue. And try to acquire a seat at the bar that overlooks the cramped kitchen – that’s where all the action takes place. 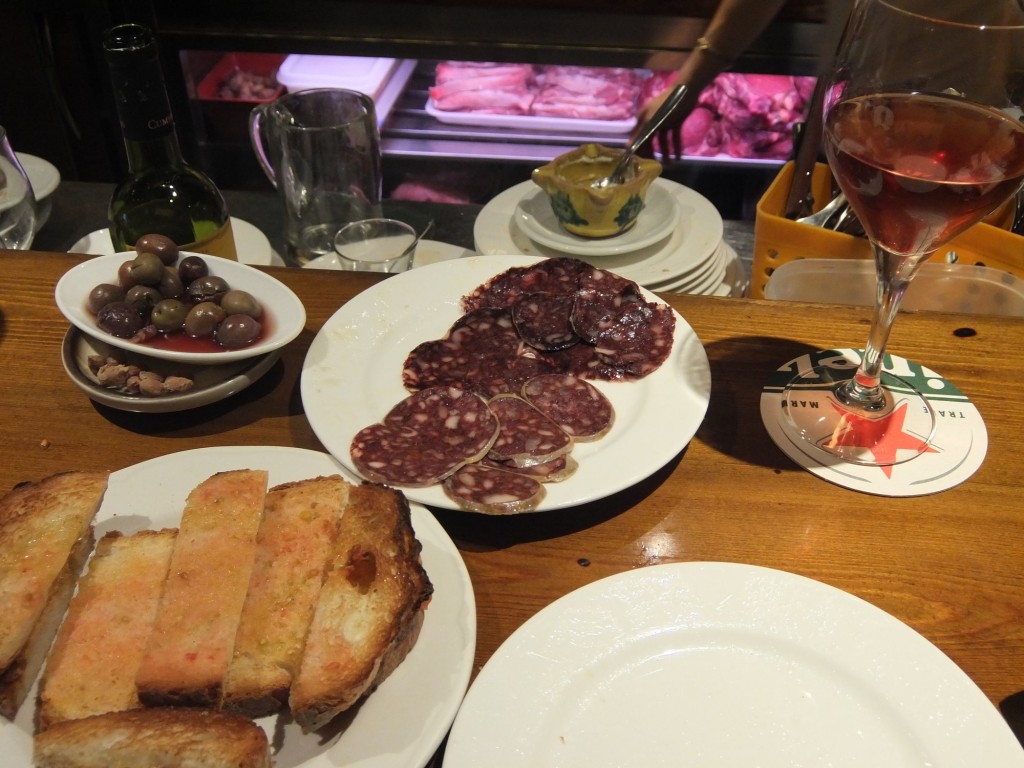 An absolute must do when travelling around the Costa Brava is the Dali Museum in Figueres. Inaugurated in 1974 and designed by Dali himself, the museum holds some of Dali’s most outlandish and bizarre work, not to mention his own private art collection and his remains, which are entombed within the building. Unlike other museums this one has no one exit or correct pathway, rather patrons are forced to find their own way throughout the museum’s circular passages and stair wells. When visiting the Dali Museum be sure to go next door to the jewel museum, which features Dali’s sketches and jewellery that he designed. 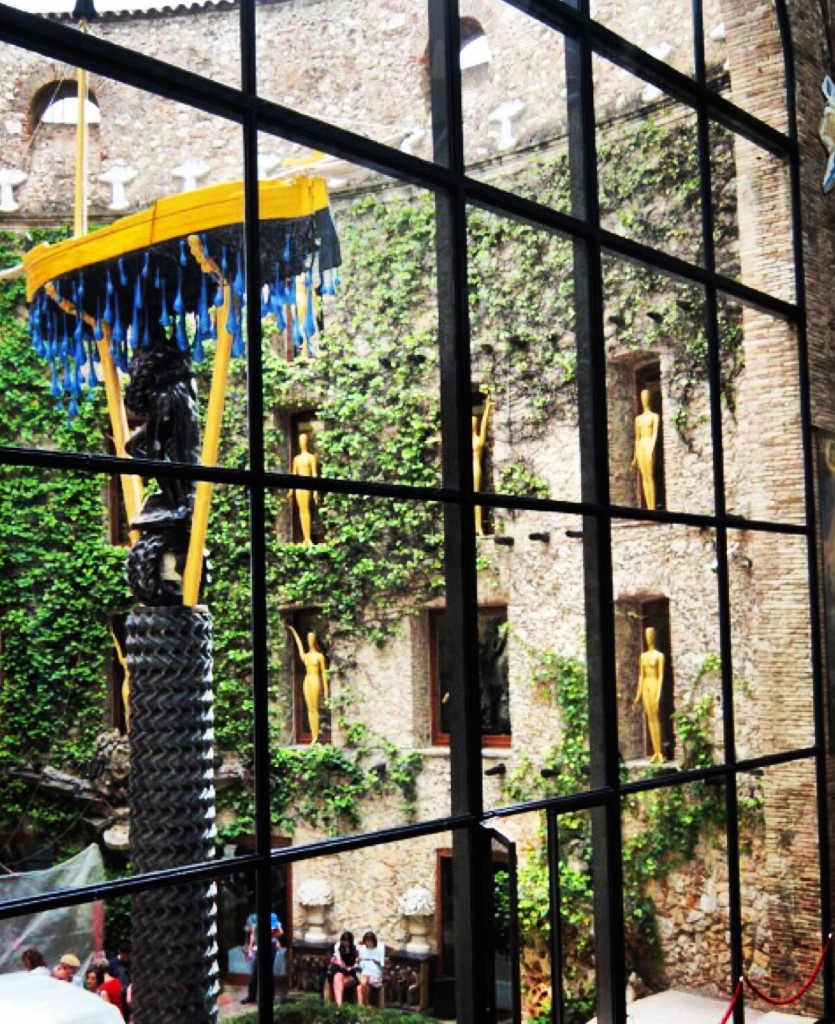