QV Melbourne is at the heart of the city’s Lunar New Year festivities, honouring traditions of generosity and celebrating The Year of the Ox. This year celebrations culminate in the work of Melbourne born painter Mark Chu who has pained a 50m2 Lunar New Year mural, one of his biggest works to date, towering over passers-by in Jane Bell Lane, just off Russell St. The Giving Ox depicts an Ox leaping up in a moment of blissful joy, signifying the massive strength the zodiac year is known for. The mural is also interactive, with an AR animation bringing the mural to life with a burst of generosity, symbols and LNY celebrations. Shoppers can also find their personalised 2021 Chinese Zodiac predictions linked to a QR Code. 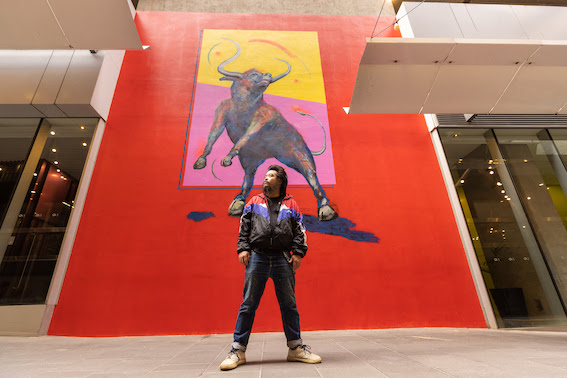 Mark has had his work exhibited everywhere from Shanghai to Amsterdam to NYC and has appeared in the New York Times and Melburnians will be lucky to catch more of his work at No Vacancy gallery where  Mark Chu will exhibit 50 paintings in a major new show entitled, The Ecstasy of People Watching, opening 25 February, until 28 February. His works ask, how do we gaze differently in this paradoxical time of social distancing and hyper-interconnectivity?

As a part of the Lunar New Year experience, Chu has created his first sculptural work, a bronze cast of an ox tail coated in 24-carat gold, called a Giving Charm. This valuable work will be priced at zero dollars; however its acquirer will receive instructions from the artist to embrace a life of generosity as fully as possible, and pass it on to a new acquirer when they no longer need to engage with the piece.