Directed by Alan White for ghd, hair at Lisa Ho was inspired by Helmut Newton. White said, “it’s like a piece of art work in the art gallery – she’s strong, she’s powerful, she’s streamlined, but she’s still got this movement in the back”. White developed a graphic shape at the back of the head and incorporated indigo hair pieces for all the models, except for two who had ruby-coloured hair pieces. The ends of the hair were chunky and blunt, so “the whole graphic trip continues”. The sides of the hair were kept flat and smoothed down with ghd Final Shine. 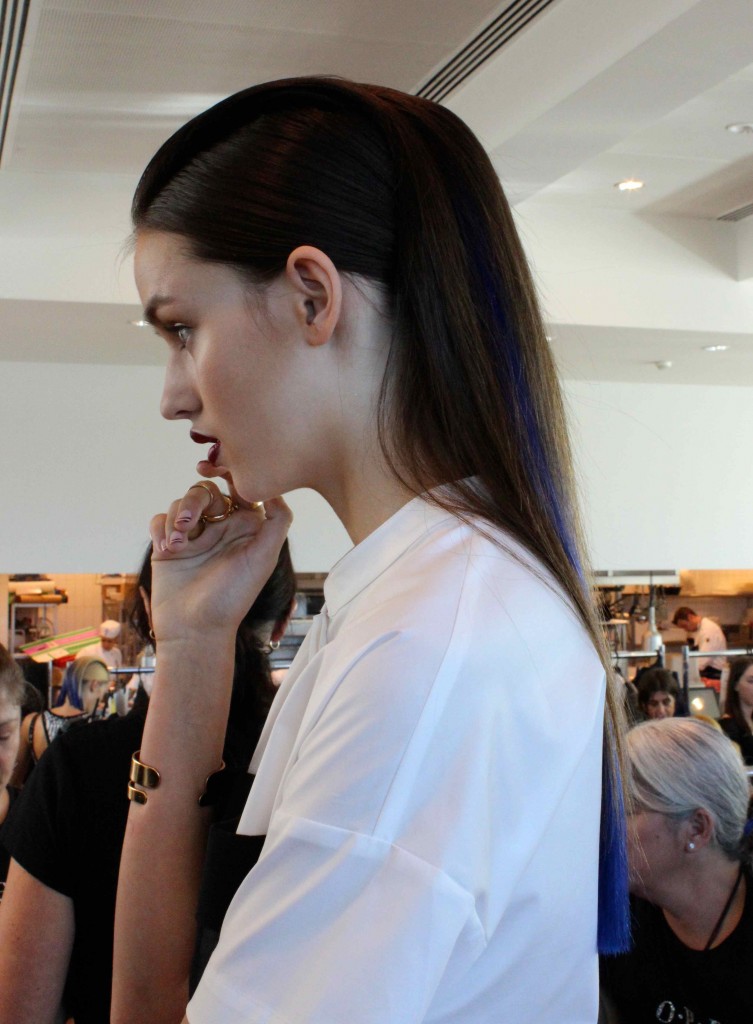 Val Garland for MAC made the girls look “athletically wealthy… super-chic and super-groomed”. The skin was luminous and polished with highlighter and contouring. The feature of the makeup was the lip, Garland wanting the effect to be as though it is “jumping off the page”. An intense blueberry-red formed the base, and a custom high-shine “sort of car-paint gloss” was painted on top. A second gloss was applied – white with pearlised pigment –  which had an iridescence to stop the lip from being too heavy. 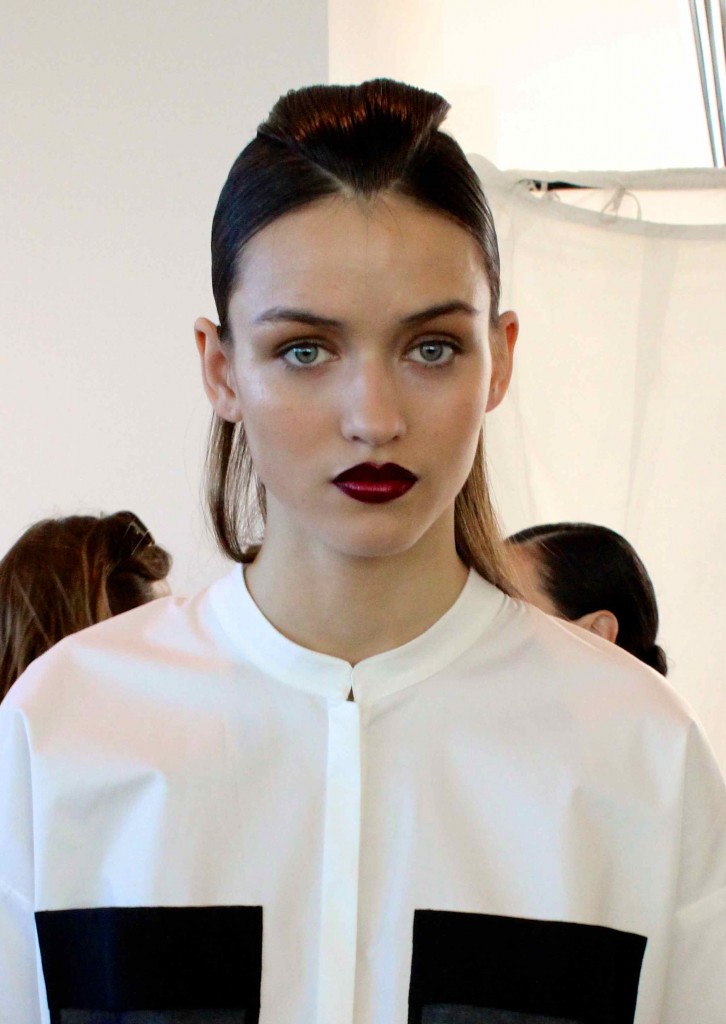 Drawing from the coral prints in the Alice McCall collection, Sophie Roberts for ghd wanted to give girls an ethereal quality with wet-look hair knotted into loose side-parted ponytails. ghd Total Volume Foam was combined with a serum and applied to damp hair. This was then diffused dry and serums and ghd Final Shine Spray gave a high-shine finish. 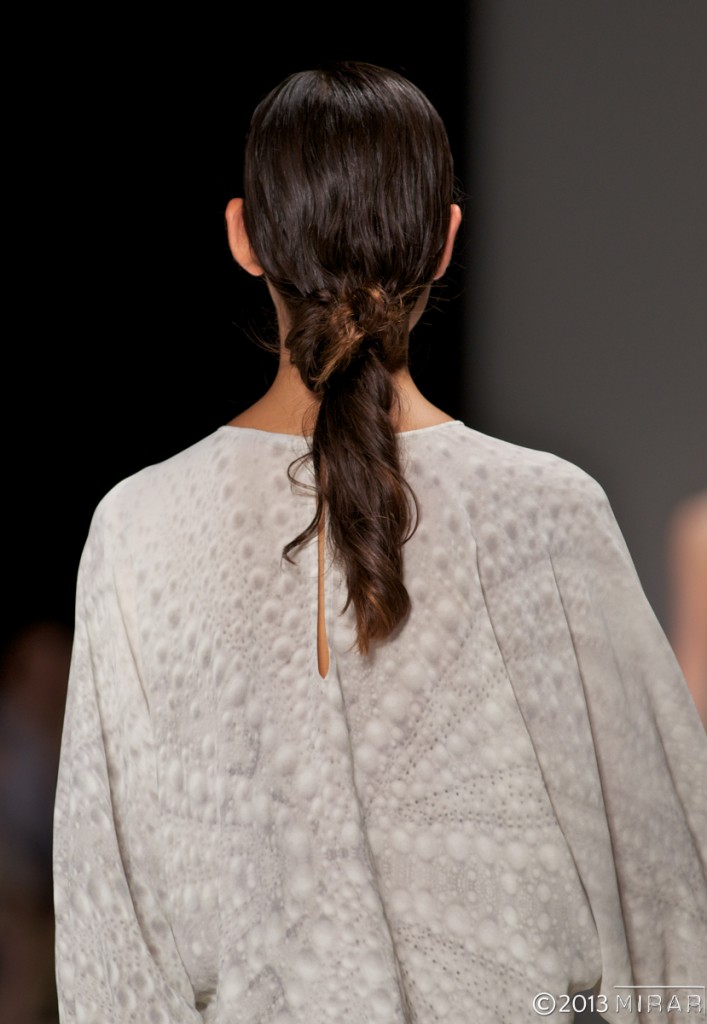 Makeup was directed by Natasha Severino for MAC, who said, “Alice’s collection has taken a lot of inspiration from undersea water nymphs… the skin is really opalescent… highly metallic and pearlised”. This was achieved with Face and Body Foundation as a base, followed by Cream Colour Base in Shell, Lunar and Pearl. The dramatic aqua blue flash eyelashes (pre-painted with a mixture of white and cyan acrylic paint) “emulate[d] this coral-like feeling”. 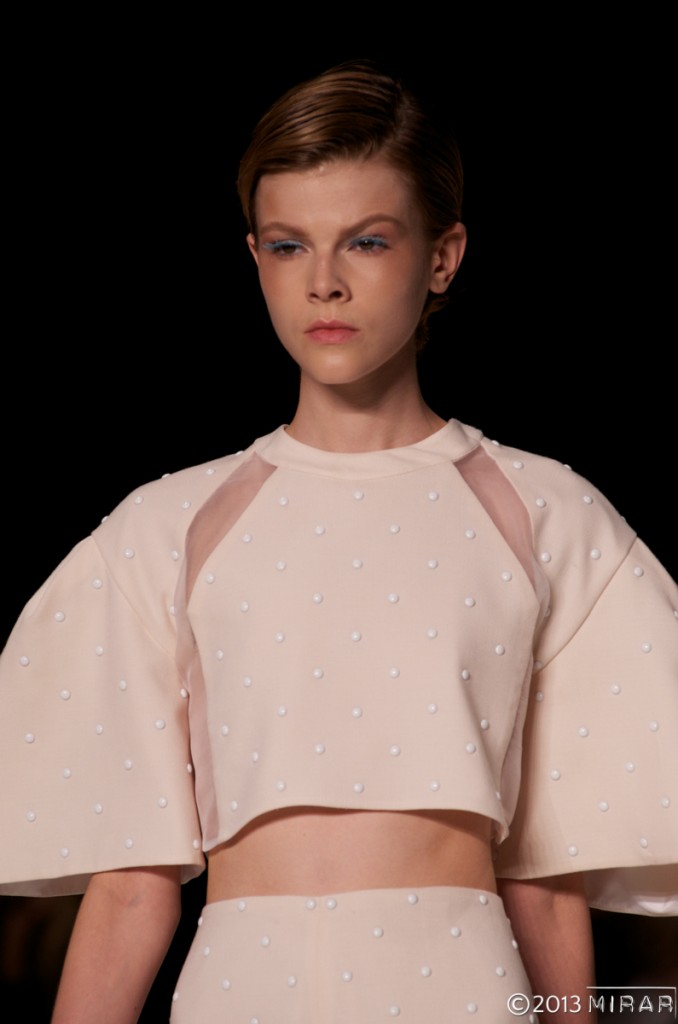 essie gave a “fresh and romantic nude nail to complement a reminine collection”, applying tow coats of Sugar Daddy over the All Bases Covered base coat. Ali Magliveras for essie said, “it shows healthy-looking nails – groomed and polished… this polish lets the clothes do the talking”. 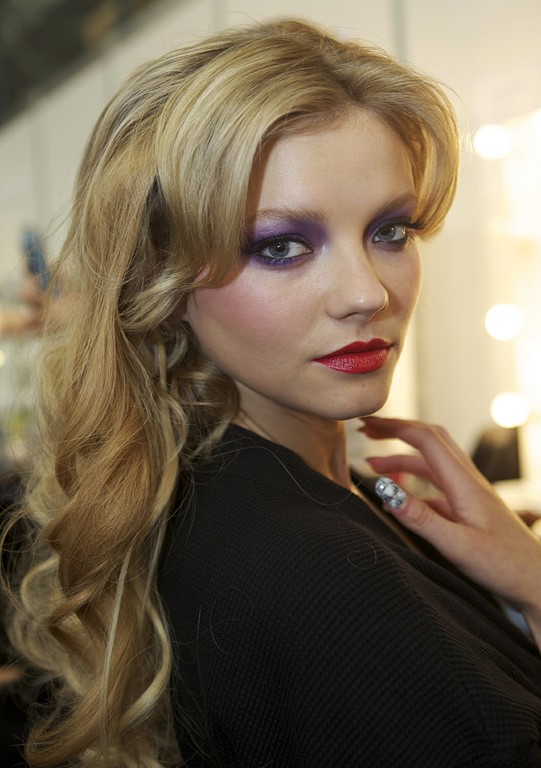 With reference to Mother Nature, Jenny Kim for Goldwell created a hairstyle “with deep, rich, earthy tones that you see in the girls’ hair extensions” that had “a bit more of a luxurious, glamorous edge as well”. Hair was lengthened with extensions, each model having extensions in one of eight different colours overall. Goldwell Diamond Gloss was applied to the hair before straightened with a flat-iron. 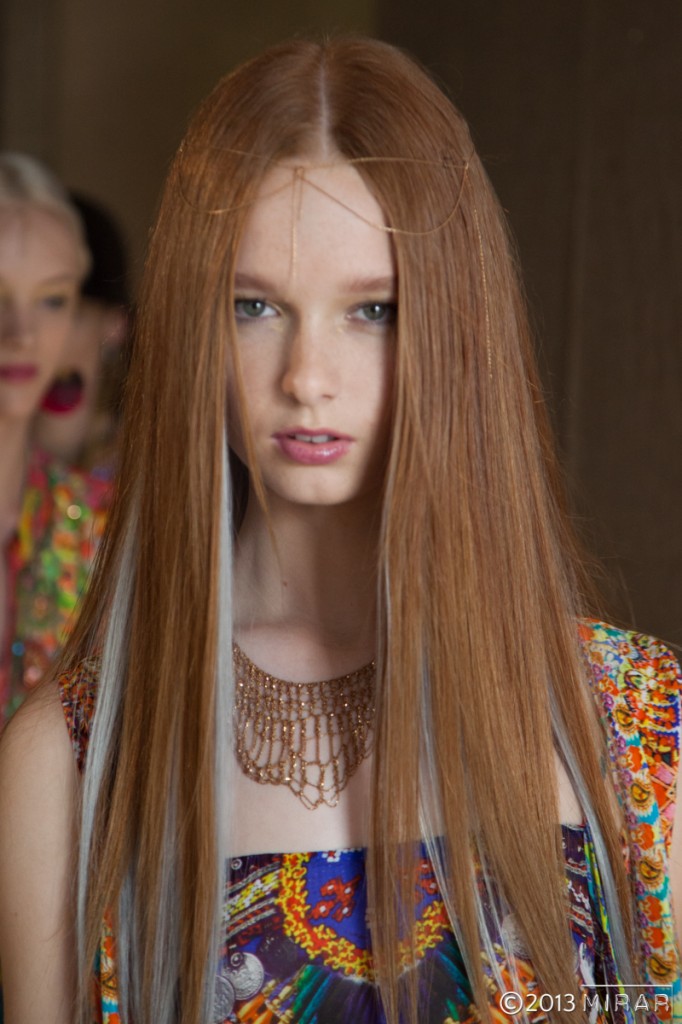 Max May for MAC “wanted to reference the starts with gold streaks across the eyelid, which is like a shooting star”, achieved with MAC Pigment in Gold and Golden Lemon. Captive and Darkside Lipsticks were blended with Lipglass and patted on the lip as a stain. Four modes were given looks inspired by Australian artist Vali Myers, who tattooed a moustache-like design on her face. This was paired with raccoon-like eyes, another signature of Myers. 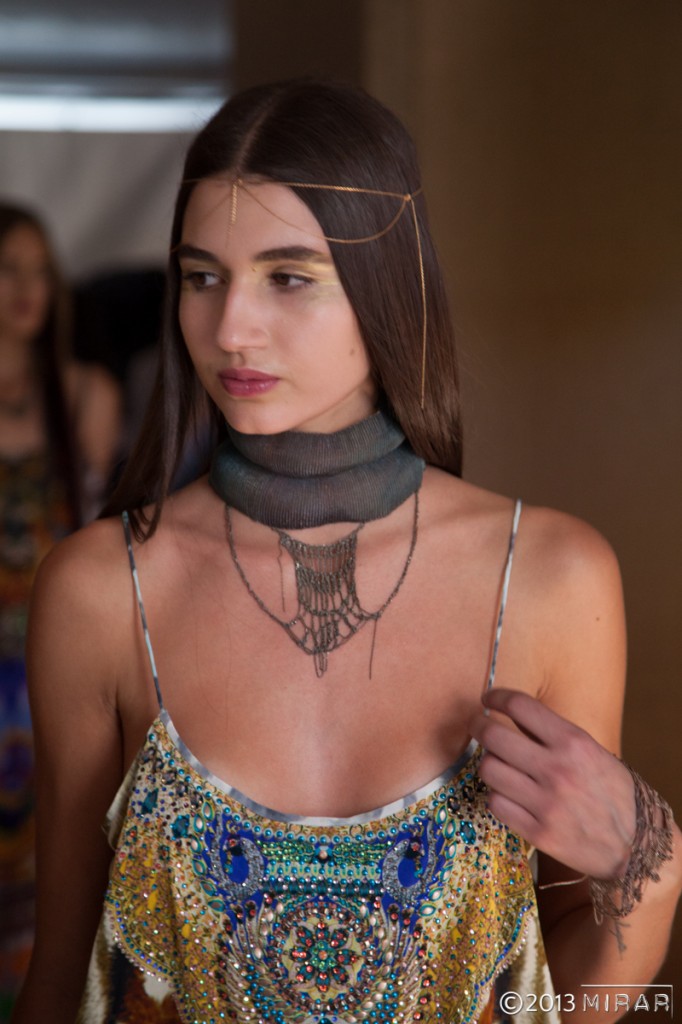 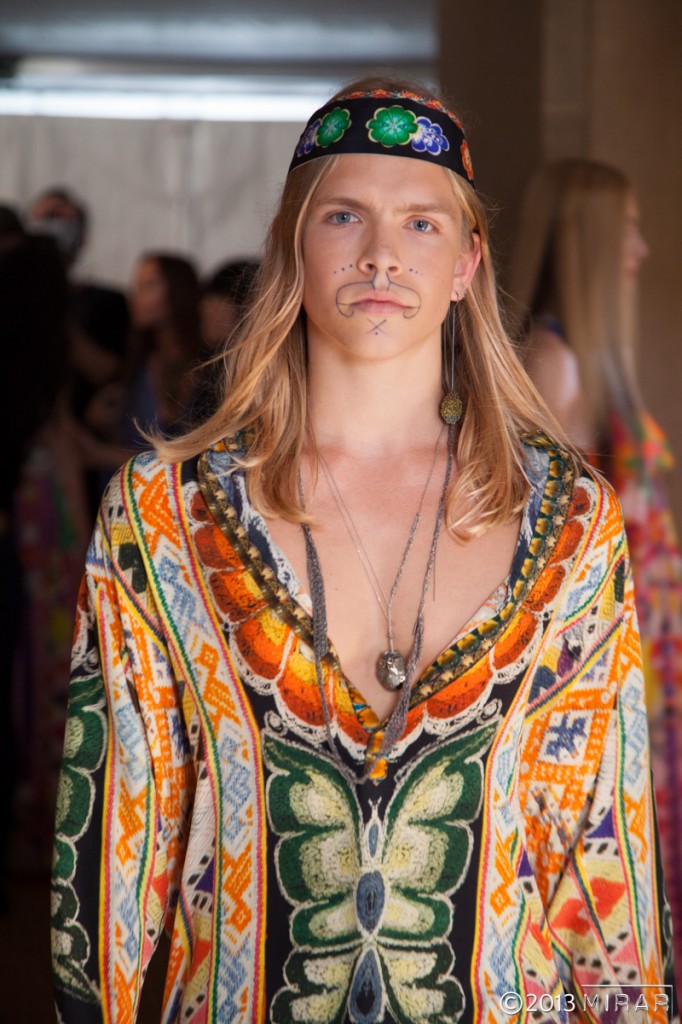 Models were given a surf-inspired hairstyle, directed by Philip Barwick for Redken. Barwick said, “it’s very elemental in that it still has some dampness to it, it’s been raked back”. Half of the hair was “just tossed back” into a looped ponytail, in addition to a small crest on the crown of the head to “complement the model’s facial features as well as give that feeling of freedom to it”.

1. Prep hair by spraying Rootful 06 to the roots.

3. To give texture, apply Woolshake 08 through mid lengths and ends of hair, then use a hairdryer to set the product.

4. Separate hair horizontally in half from ear to ear.

5. Keeping the low side part roughly intact, rake hair in the top section back towards the crown with your fingers.

6. Pull hair together just below the crown and fold the ends underneath to form a looped ponytail. Secure with hat elastic. Keep bottom section loose, and allow natural tendrils to fall around the face.

7. Apply Hardwear Gel 16 to sides and front of hair, raking back with fingers for a surf texture.

8. Finish with Forceful 23 for hold and Shine Flash 02 for shine.

Maybelline New York Makeup Director, Nigel Stanislaus, said “the girl that we’re going to do today is a beach girl – she’s outdoors, she loves nature… The strong brow, matte pink lip and shredded nails speak of NYC edge merged with the essence of 90s surf cool.” FITme Foundation and FITme Bronzer formed the base on the skin. A glossy, peach eye was achieved with Color Sensational High Shine Lip Gloss in Iced Chocolate and Mirrored Mauve, which acted as stains over the lid and along the lower lash line. Color Sensational Vivids Lipcolor in Pink Pop made up the high-impact pink lip, and Color Show Nail Laquer in Porcelain Party and Carbon Frost were painted onto nails in a graphic pattern. 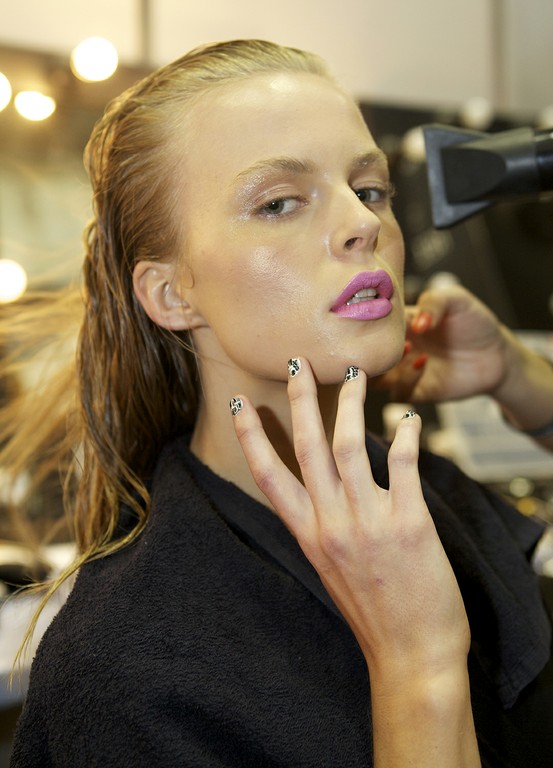 Maybelline New York Makeup Director, Nigel Stanislaus, said “for the look for Michael Lo Sordo, the number one word is adolescent, and the second is androgyny. Think about Brooke Shields back in her heyday… Like innocent young girls who have just escaped the nunnery”. The feature of the makeup was a small blue triangle beside each eye, achieved by using Color Tatoo in Tenacious Teal and Too Cool. Stanislaus said, “this is to pay homage to the collection. It’s not meant to be a winged eye or anything, it’s just floating there – just because”.  The bold “pussycat eyebrow” was created by filling the brows in, brushing them up and setting it with Baby Lips to “make it a little bit spiky” for drama. The face was lightly contoured over FITme Foundation, and mascara was also left out for a fresh eye. For the lip, Stanislaus wanted it to appear “slightly bruised and just bitten”, achieved with Color Sensational Vivids Lipcolor in Vivid Rose, layered under a nude gloss (Color Sensational High Shine Gloss in Luminous). 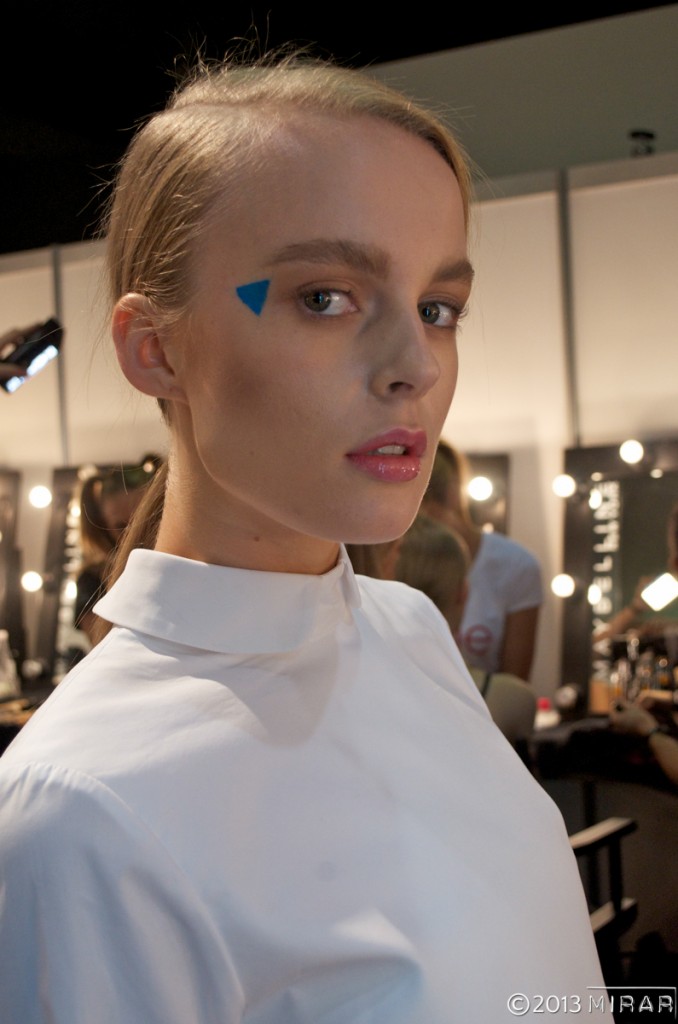 Hair by Redken allowed the strong silhouettes in Michael Lo Sordo’s collection to do the talking. Hair Director Richard Kavanagh said, “we wanted the hair to be something simple that stands out as being signature for Michael. Essentially, we have a low ponytail… that is shiny and soft, and all the delicious things that hair can be. To make it slightly quirky and unique, we’ve done an androgynous low side part and swept it across, doing a design detail with a bobby pin. Every girl is personalised with little messy details at the side, at the crown, to indicate that unique personality.” 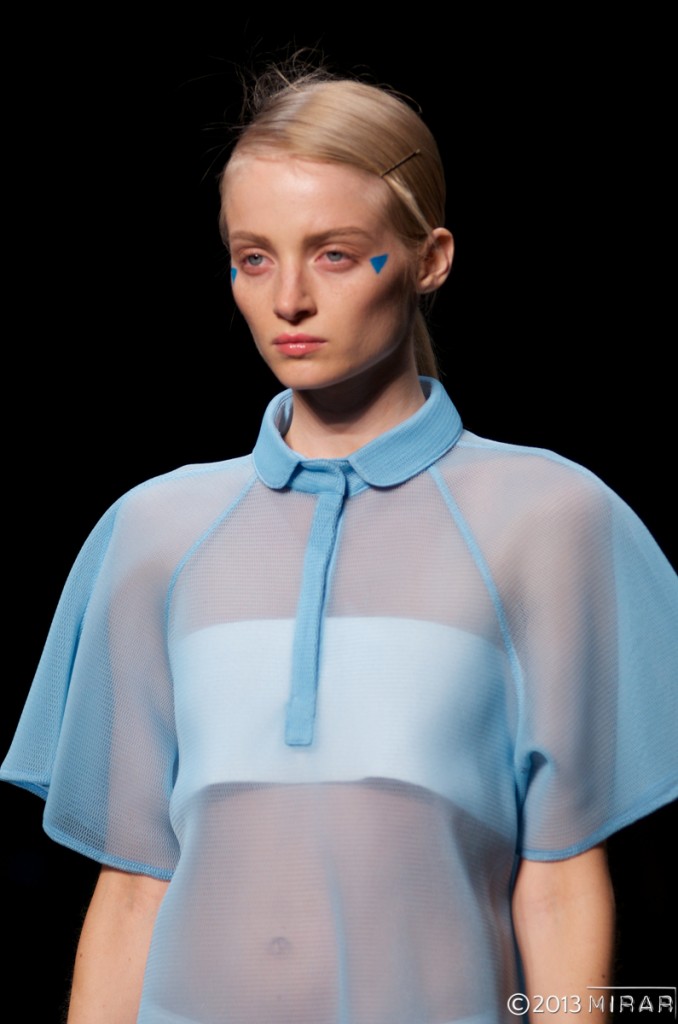 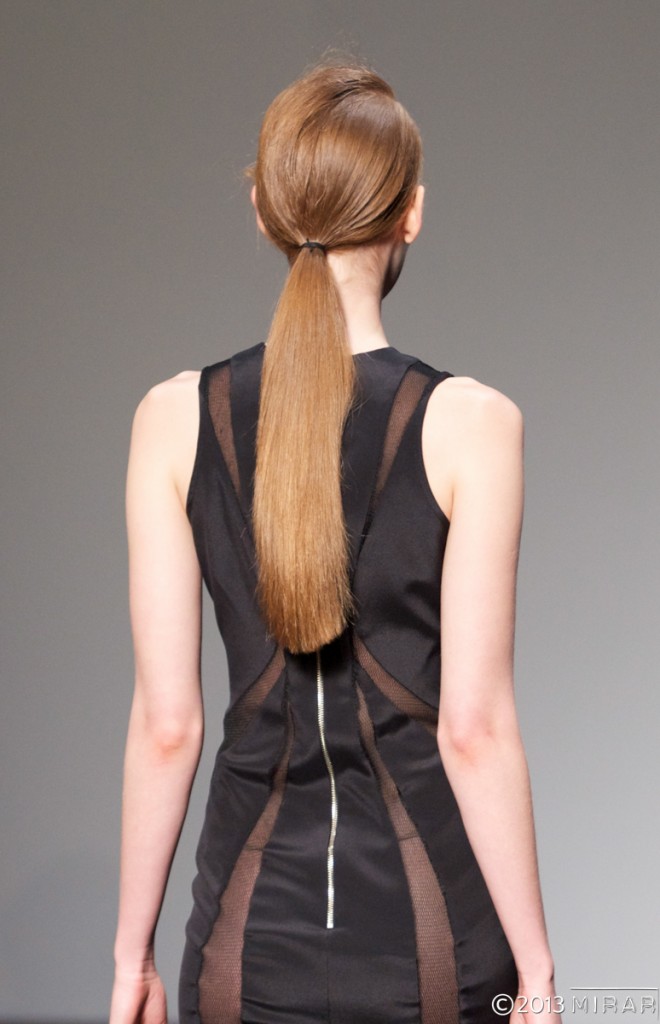 1. Prep hair with Diamond Oil through mid-lengths and ends.

3. In sections, use a flat-iron to achieve poker-straight hair. Spray Iron Shape 11 Finishing Thermal Spray to each section before straightening.

4. For extra shine, rub Diamond Oil between palms and apply to mid-lengths and ends.

5. Pin side fringe with a bobby pin. Pull lengths of hair into a ponytail at the nape of the neck and secure with hat elastic.

Nails by essie were “a mix of modern and playful tones in a geometric design to offset the relaxed and fluid style of Michael Lo Sordo’s collection”. essie First Base was applied first as a base coat, followed by two coats of Chinchilly. Once dry, Bikini So Teeny was applied across the top half of the nail. 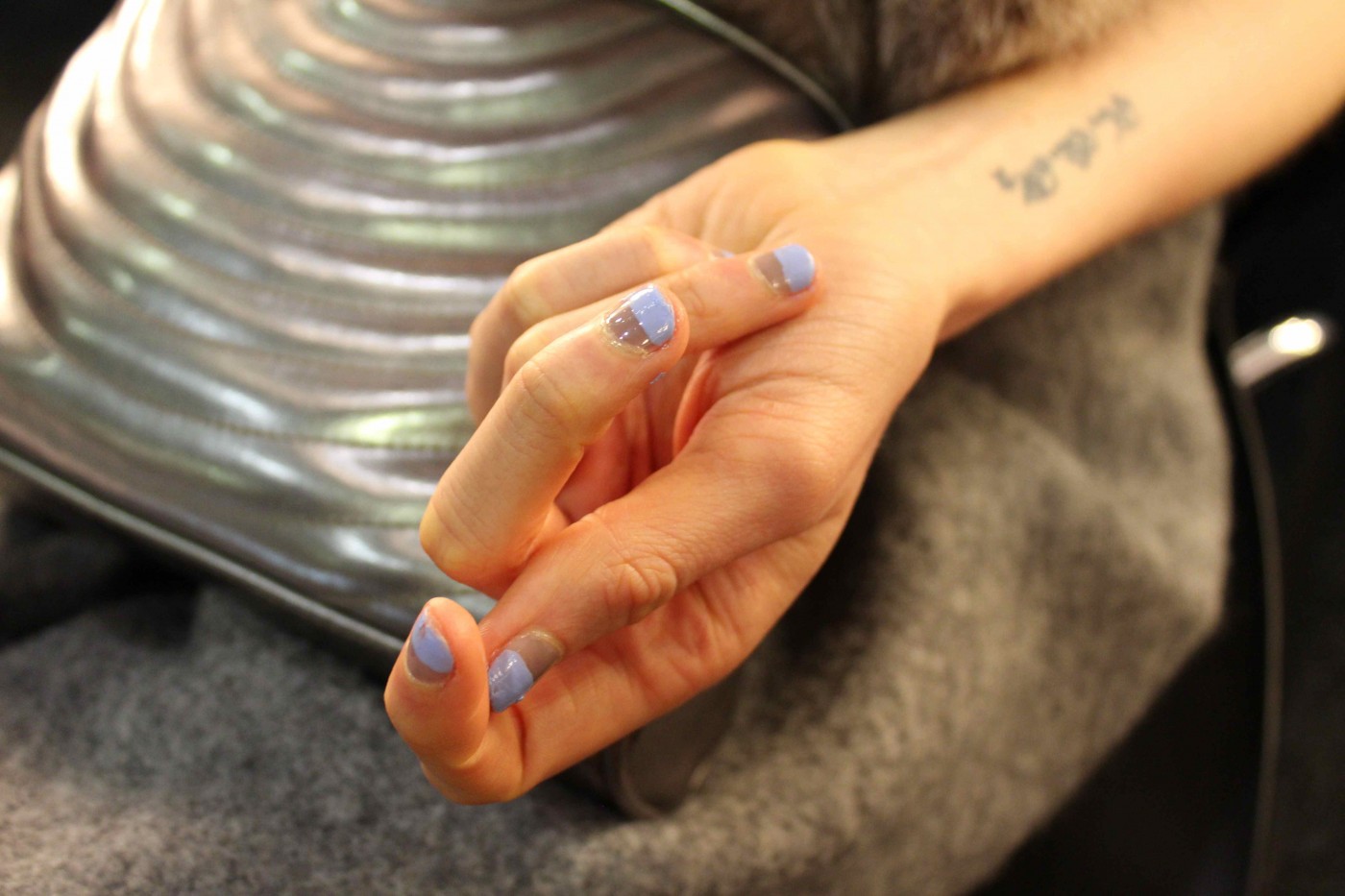