Hair at Karla Spetic took the same inspiration as the collection, the themes of national dress and tradition. Sophie Roberts for ghd said, “we wanted to find a hairstyle that paid homage to that but that also had a very feminine, very youthful and playful feeling”. Each model was given hair extensions, which was ironed through with the ghd Eclipse iron to give luscious, silky locks. Low plaits were braided with a centre part for a relaxed and playful look. 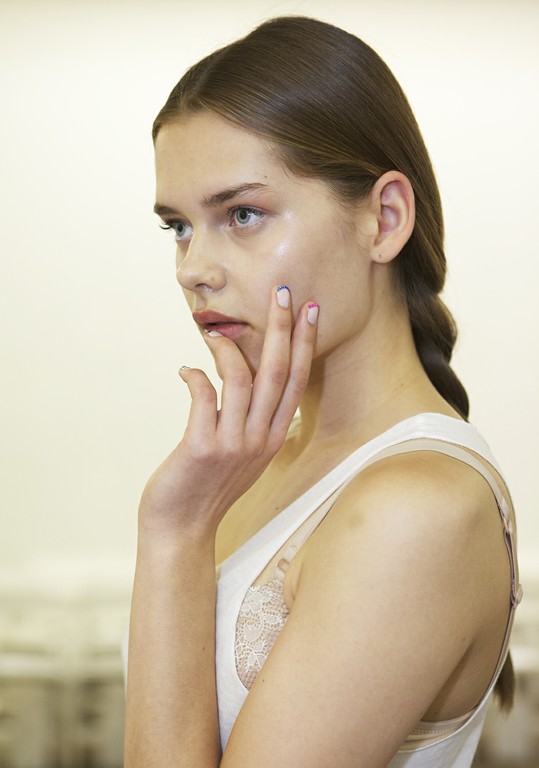 Kate Squires for Napoleon Perdis gave models an angelic face with flawless, youthful skin, achieved with a radiance boosting primer (yet to be released). A subtle peach colour (The One Concealer) was applied over the eyelid, and beneath the eye “a little white halo which gives the girl an innocence” (Color Disc Ivory Tower). The top of the cheekbone was highlighted with a light dusting of Loose Eye Dust in Ice Storm for an “other-worldly sheen”. Squires summarised, “they’re not women, they’re not girls – they’re just somewhere in between, they’ve got that divinity to them”.

Essie came up with “a fun and flirtatious look to compliment the feminine, elegant and sheer pieces”. A french manicure with a nude base and coloured tips was applied, which is sure to be popular for a fresh and easy look this summer. The nude base colours were Ballet Slippers and Adore-A-Ball, with one layer of each applied. The bright poppy shades for the coloured tips were Mesmerised, Beach Bum Blu, Marshmallow, Secret Story and No More Film, which were applied twice for a strong finish.

Richard Kavanagh for Redken created a look for Ginger & Smart that matched the aesthetic of the brand, for the girl who is “cool and has an effortless sense of self”. The hairstyle “exists in that place where the masculine meets the feminine; combining softness and high quality with strength and a sense of self”. With tousled waves slightly tucked behind the ear, each style was tailored to each individual model according to her face shape. 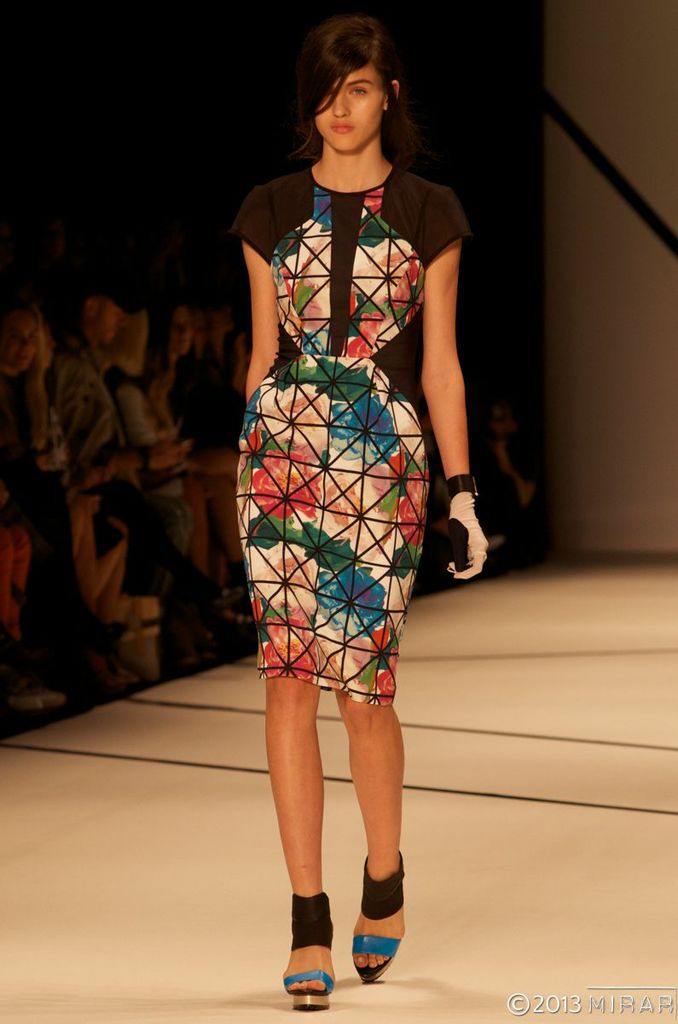 to lend hair shine and movement.

3) To give hold and texture, brush hair through, especially at the front of the head. Blow-dry until completely dry, aided by your fingers (not a brush).

Napoleon Perdis (for Napoleon Perdis) emphasised the strong cheekbone lines on the face to match with the strong lines in the Ginger & Smart collection. Perdis said, “since the Ginger & Smart girl is a little edgy, but still expensive looking, she needs a bit of a glow to the complexion, a subtle highlight”, with Boudour Mist Spray Foundation being the key product. Brown mascara (rather than black) was used, and brows were full and groomed. Lips were neutral with a swipe of Mattetastis Lipstick in Ava. 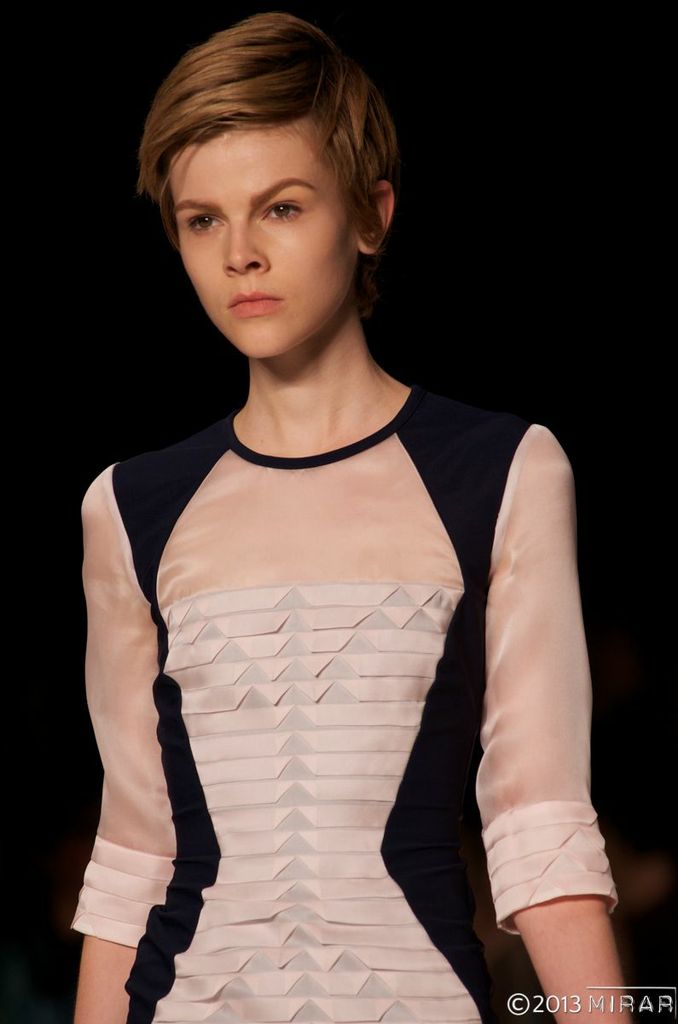 Nails by OPI were in Don’t Pretzel my Buttons, with a matte top coat. Director Karon McKendrick-Taylor said “it’s a good solid colour, which is what the girls need after five or six nail polish changes in one day”.

Paloma Rose Garcia, hair director for Redken, says the designers “wanted a very natural look, very Pocohontas, American-Indian inspired…. Literally it’s like the hair has not been brushed for two days… in the wilderness”. Hair was prepped with Redken Rootful 06 to make the hair piecey and naturally separated. The hair was pulled back roughly into a loose plait, halfway tucked at the end lengths. Gold pigment was applied through the ends “just to get that real rustic, American-Indian hair. 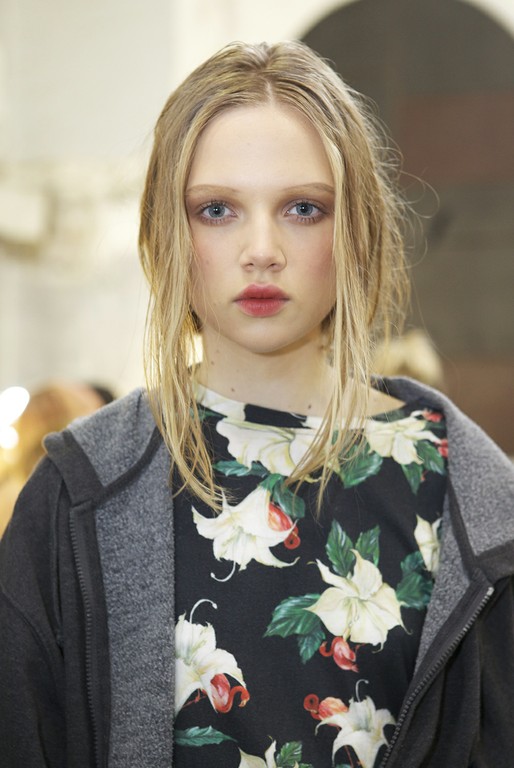 James Malloy for MAC directed makeup at Flannel, inspired by the “slightly melancholic [1920s] girl… imagine Mia Farrow in The Great Gatsby“. As a result, the “girls are very beige… like a sepia photograph”. The Mineralize Foundation gave the models plump, “teenage skin”, and Cream Colour Base in Mid Tone Sepia was applied to the eyes in a soft oval shape. A rounded ’20s-style brow and MAC Lipstick in Chili applied with an eyeshadow brush for “a whisper of colour” finished the look.

At Talulah, Sally Hansen Nail Expert, Alison Bowhill-Hayes, said “Taluluh [is] trending the metallic nail with a simple black line down the centre. The silvery khaki Shoot the Moon was applied for a “majestic glitter finish that shimmers in the moonlight”, and the coppery Pennies for Heaven “glimmers like a hot summer”. The feature black line down the centre of the nail “adds art but reflects the fun of Talulah”, said Bowhill-Hayes. 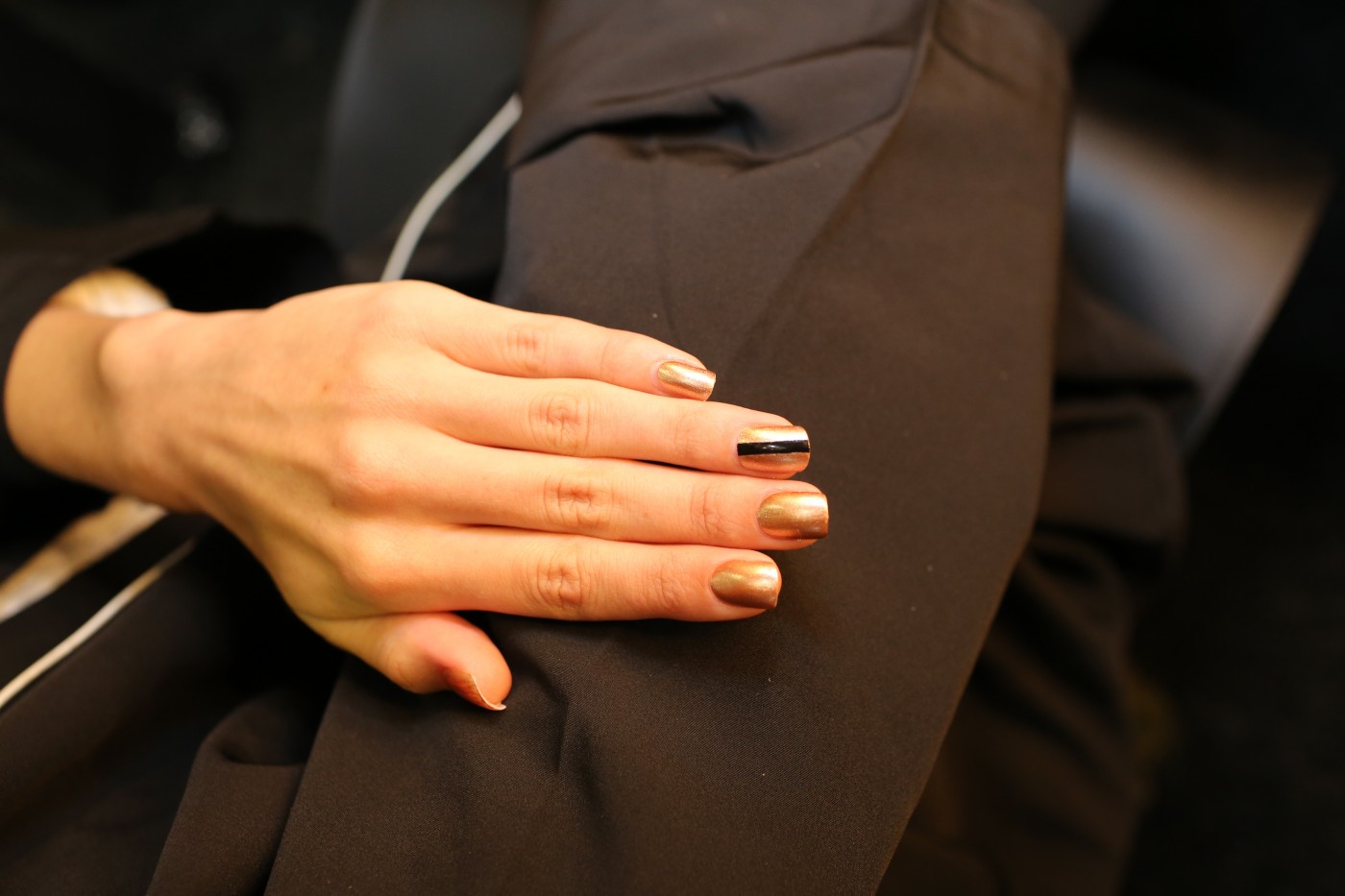 At Ellery, Mandy Kingsman for TONI&GUY developed a “90s rock’n’roll anti-hairdo” that gave a nod to icons such as Anita Pallenberg and Joah Jett. A “wiggy” texture was created with TONI&GUY Texturising Sea Salt Spray and the yet-to-be-released Sculpting Powder, the two products giving a “gritty feel to the hair”. 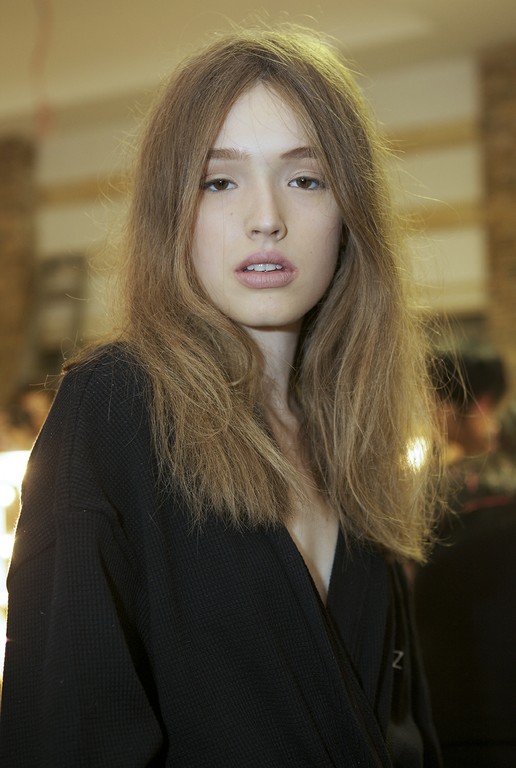 Makeup by Napoleon Perdis gave models “milky but matte” skin by using green and lavender-based concealers to take out yellow undertones in the skin. A fresh white colour was applied to the inner socket of the eye to give a “feminine… halo of white”. Perdis traded mascara for a line of black on the waterline below the lashes for definition. A natural rose-nude lip and a light dusting of powder through the brows finished the face for the “cool” Ellery girl.

Joh Bailey for TRESemmé gave models a multi-textured, futuristic hairstyle that was “inspired by Jayson’s love for cinema and couture” and “meant to look like you’ve dived into a pool and come up”. Hair was blow-dried and ironed straight, then TRESemmé Smoothing Creme generously applied to the crown of the head and combed back with visible teeth marks. The lengths of the hair were left dry for dimension and the look was finished with TRESemmé Tres Two Spray. 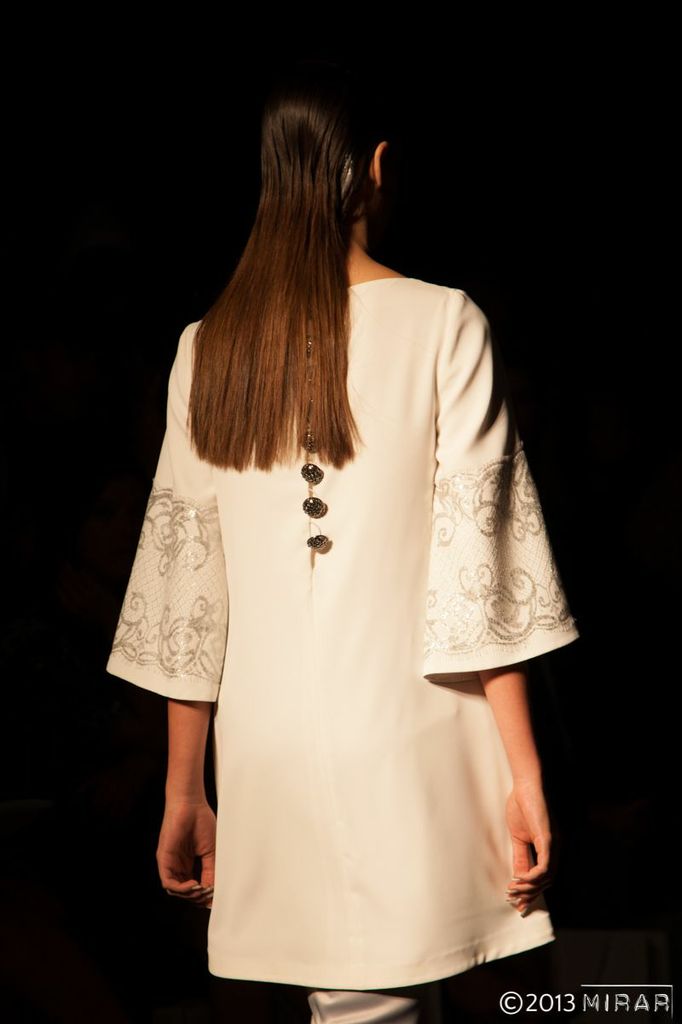 Nicole Thompson for MAC focused on the brows and eyes for the runway makeup, mixing black and white kohl pencils to make “an opaque grey cream that I”m going to paint on… winged out, not a curvy, girly flick”. Reflective MAC Silver Pigment coated the eyelids, and skin was perfected with MAC Mineralize Moisture Foundation. Brows were “super fierce and very uniform… going quite low at the front of the brow and then taking the arch up high”. A “cement, stoney nude on the lip” – MAC Fresh Brew and MAC Oak Lip Pencil – let the eyes and brows shine. 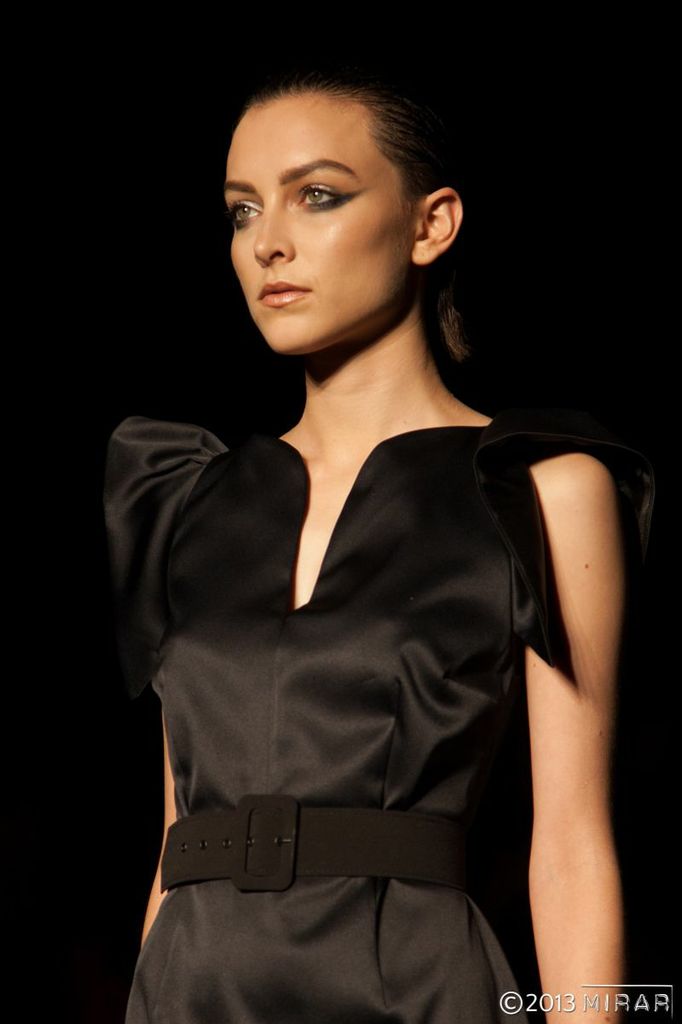 Jayne Wild for ghd created a Japanese obi on the hair at Maticevski, working to build “something a bit classic with a play on shapes, and fun hair coverings to touch on the Geisha meets Grace Kelly theme”. Hair was prepped with ghd Heat Protect and Volume Foam, then sectioned into four parts – two ponytails on the back, and four on the side. Hair pieces were built with chicken wire and hair pieces in the models’ own hair colour. The top of the hair was teased and brushed over the hair pieces, then rolled upwards around the piece. 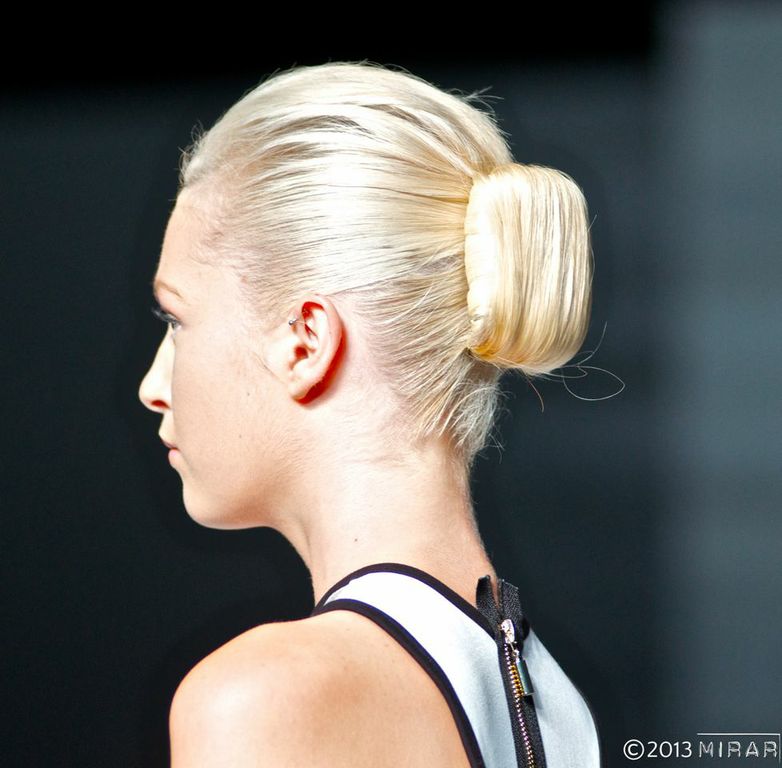 Makeup by Napoleon Perdis focused on “beautiful skin, with a freshness of soft pink undertones [and] a fun take on the beauty spot”. Off Duty Tinted Moisturizer kept the skin fresh, and a lilac eyeshadow (Colour Disc Lilac Maniac) patted on top of a mauve lip gloss (Luminous Lip Veil Cherchez La Femme) gave a modern texture to the lip. Perdis called it “absolutely refined beauty with a very aristocratic, very regal air”. 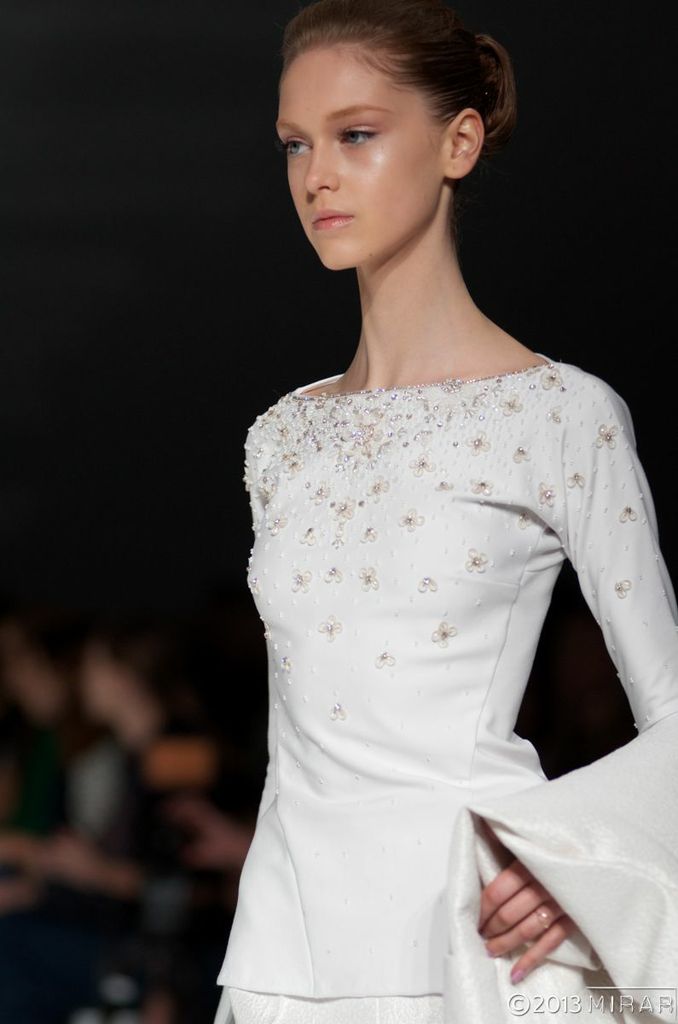 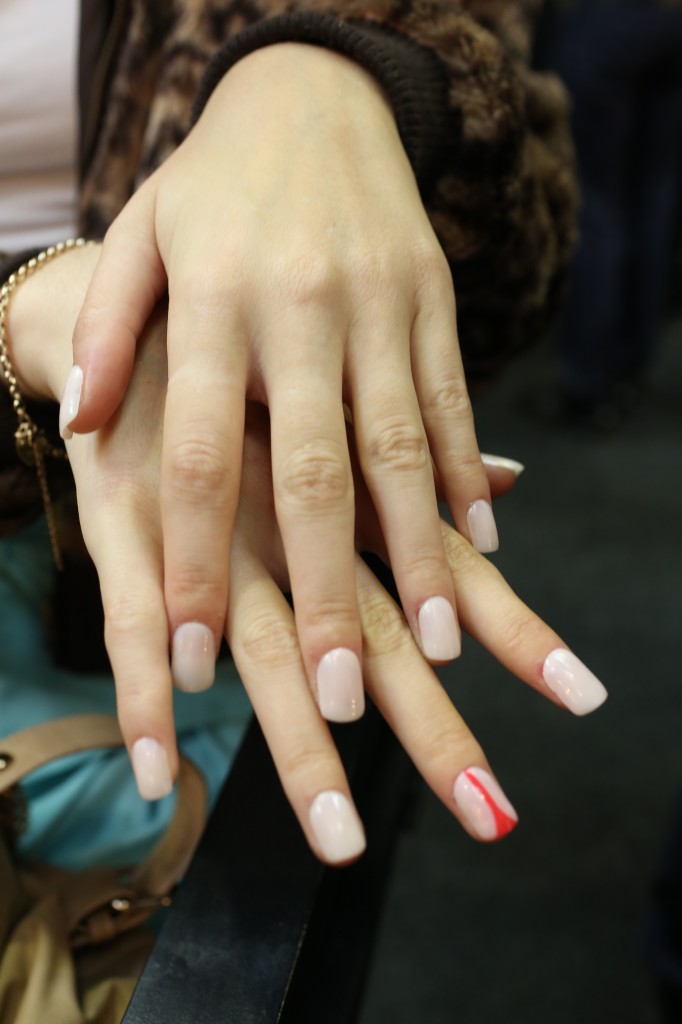 Maticevski worked with Sally Hansen for the nails on the runway, with nude, pastel colours with a statement nail that popped on the middle finger. The range used was the Sally Hansen Complete Salon Manicure, the nude colours being Shell We Dance, Pink At Him and Kook A Mango. The contrasting statement nail were painted in a T-design in Fruitti Petutie and Purple Heart layered over Shell We Dance. Alison Bowhill-Hayes, Sally Hansen Nail Expert said the look was “simple, not complicated, hot for summer, cool for design”.

To complement the different tribal, urban and stream-lined elements in Manning Cartell’s collection, Alan White for ghd brought a polished and youthful hairstyle to the runway. Hair was first prepped with Total Volume Foam, and an inverted braid was incorporated down the centre of the head, flat against the crown. This was joined to a tiny ponytail at the base of the neck, which kept the braid in place but allowed the remaining hair to move as models walked down the runway. Smooth and Finish Serum was combined with Straight and Tame Cream and raked through the hair to give hold and shine. 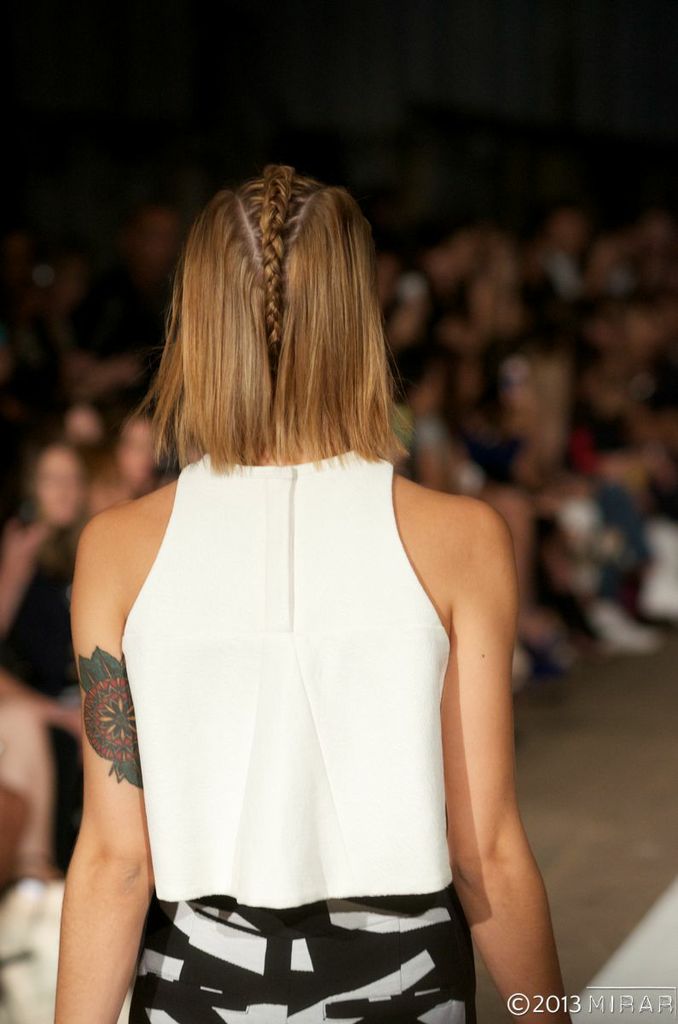 Max May for MAC sought to embody the romantic collection “by creating pale, muted and metallic but luminous skin with highlights”. Mascara was foregone, and MAC Copperplate and Knight Devine eyeshadows were used for a pale silver eye in a graphic square shape, applied from the lash line up to the brow bone. A “pashed lip” made a statement in a pale yellow-based orange matte lipstick (MAC Lipmix in White, Yellow and Orange), which was “really soft, so it kind of looks like they’ve been kissing”. A strong brow balanced the face, brushed up and set with MAC Clear Brow Set. 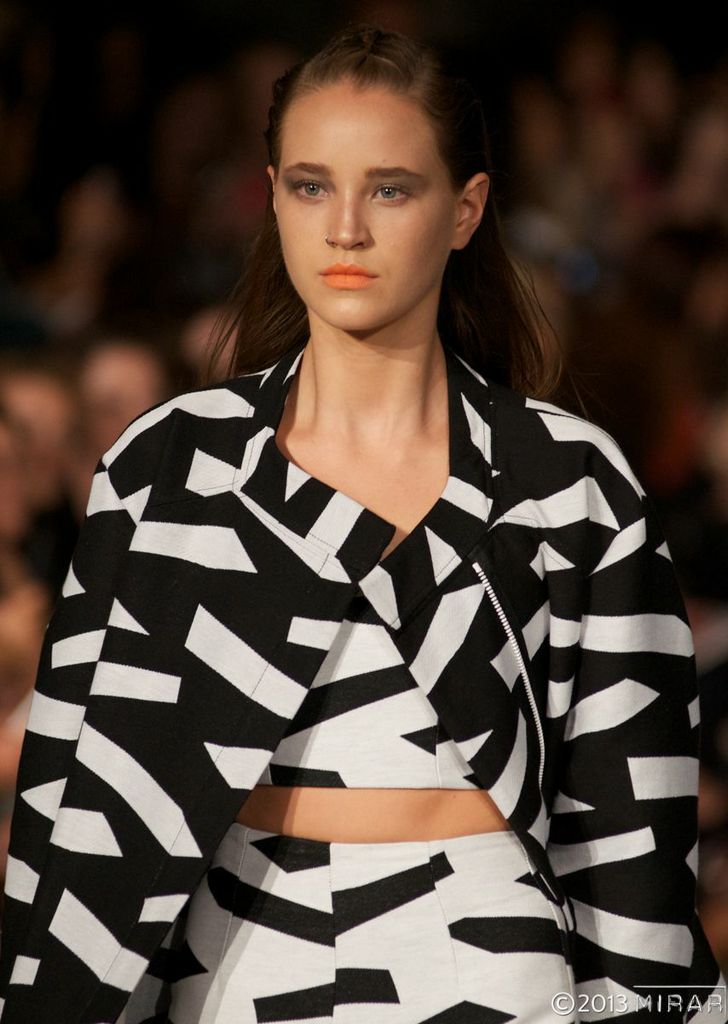 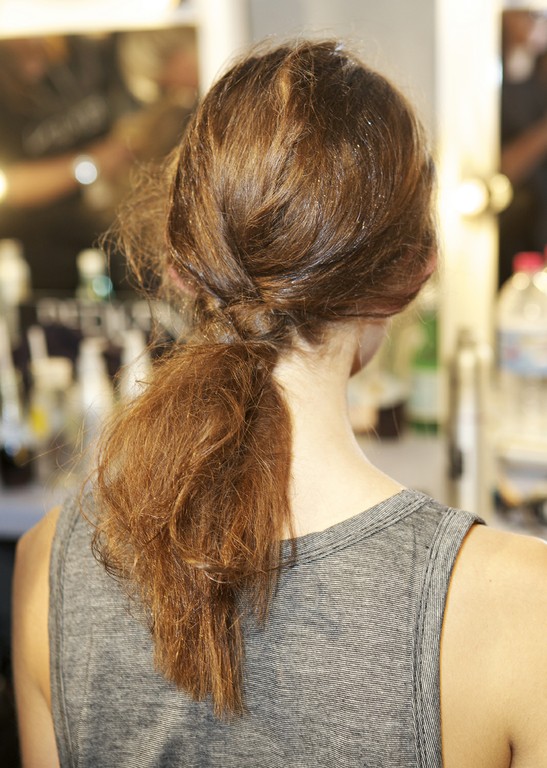 2. With a hairdryer on a high heat setting, dry hair, brushing through as you go.

4. Side-part hair on the left. Pull hair across towards the right and into a low ponytail at the nape of the neck

5. Create a loose plait only a couple of inches long. Secure with a pin.

6. Spray Powder Refresh 01 Dry Shampoo all over for a dusty, textured look.

At Aje, Redken Hair Director Jon Pulitano gave models hair that was “smooth and sexy with natural movement, but we also deliberately left some flyaway hair at the crown to create a halo meets raw-rock feeling”. 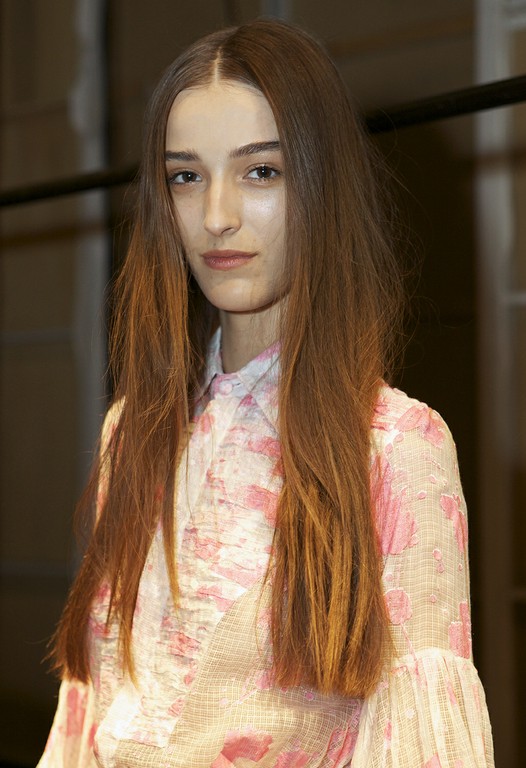 2. Blow dry hair in sections until dry with a bristle brush, starting at the nape of the neck and moving upwards.

3. Rub a small amount of Argan-6 Oil between palms and apply to the mid-lengths and ends of hair. Twist ad you go as though twisting into a bun.

4. Sprinkle Powder Grip 03 Mattifying Hair Powder to the roots and agitate hair with fingers for a bed-head look.

5. Finish with Fashion Works 12 for shine and hold.