Beauty at camilla & marc‘s show followed the same inspiration of the SS13 collection “Concentric”, the Russian Matryoshka Doll. Directed by Shane Henning for KMS California, hair was simple and sleek both “with a sophisticated edge”, worn out and parted deep on the left hand side. The left side was twisted under the rest of the hair, giving it an almost wet-look texture to contrast the remainder of the hair, which was given some texture using KMS California Free Shape Hot Flex Spray. This product gave the hair a smooth finish, while at the back of the head, KMS California Playable Texture was applied to “hold the hair in place” and create “some ruffled volume”. 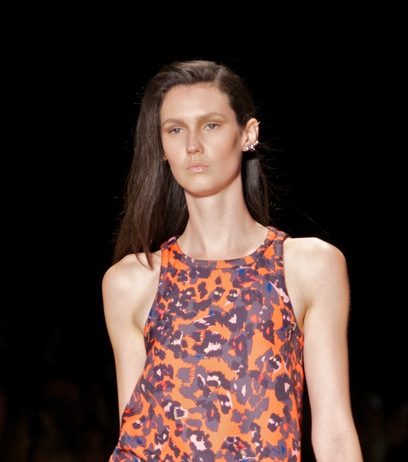 Makeup by Napoleon Perdis was kept simple and nude like the Matryoshka doll itself: “naked skin”… “creamy and milky, contoured, strong and elegant”. Skin was kept bare but glowy with Napoleon Perdi Boudoir Mist Spray Foundation. Brows were minimised with foundation to “[inject] freshness into a typically very classic beauty look”. A strong eye was created by contouring through the socket on the inner half of the eye with Napoleon Perdis Eyeshadow Quad #4. A swipe of Dévine Goddess Lipstick in Gamelia, layered with Lip Lacquer in Clearly Glam finished the look. 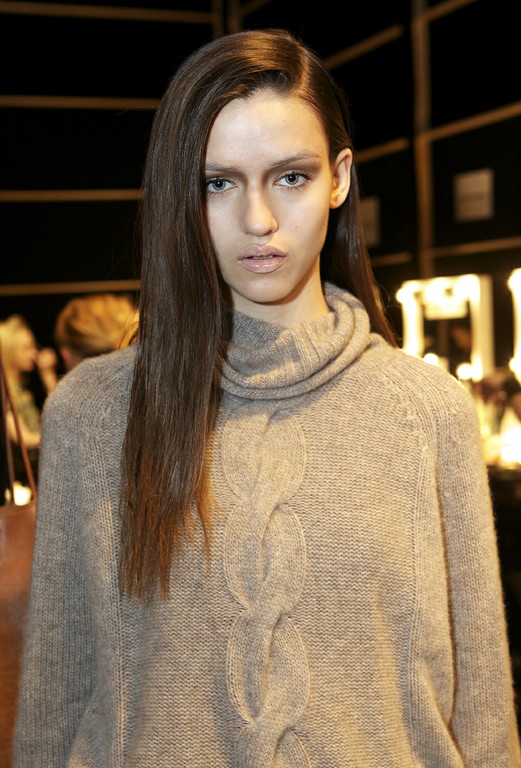 Nails were directed by Charlotte Knight for Ciate, featuring two colours – Couture, and Members Only – layered to create a shimmery nude shade.

At Aurelio Costarella, hair was directed by Lee Preston for Goldwell, who created a 50s-inspired beehive with a “directional up-to-date feel”. Goldwell Hot Form Spray was applied to prep the hair before blow-drying to give the hair pliability while keeping hold. Colour wefts in exactly the same shades as in Costarella’s collection were also incorporated, and plenty of volume was kept in the comb shape over the crown. The look was finished with Goldwell Shine Spray and Goldwell Defintion Fix-In Spray. 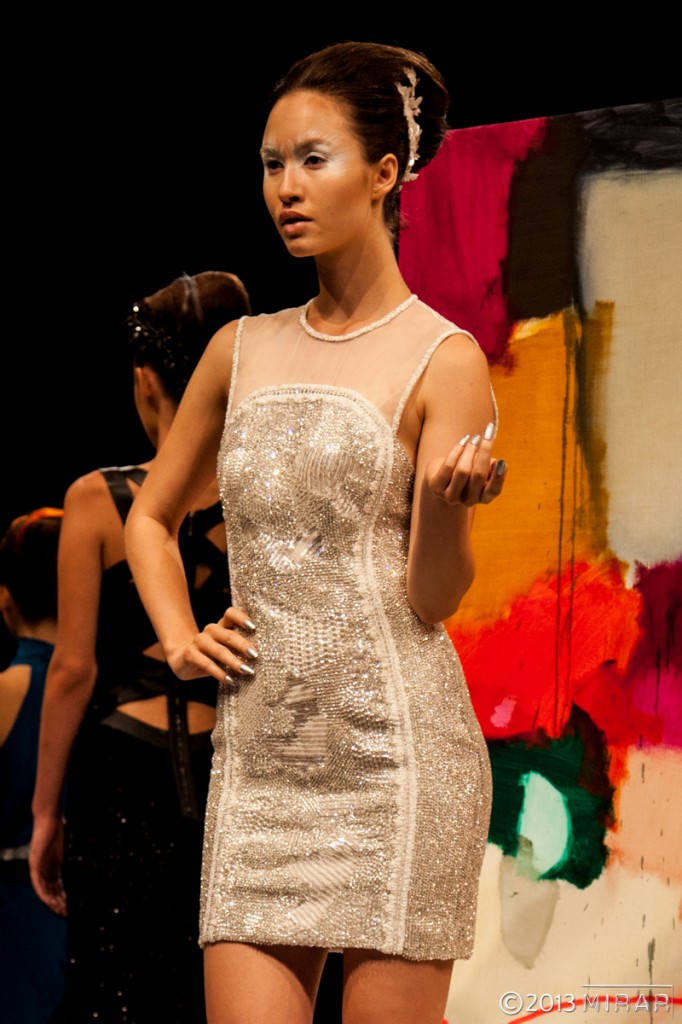 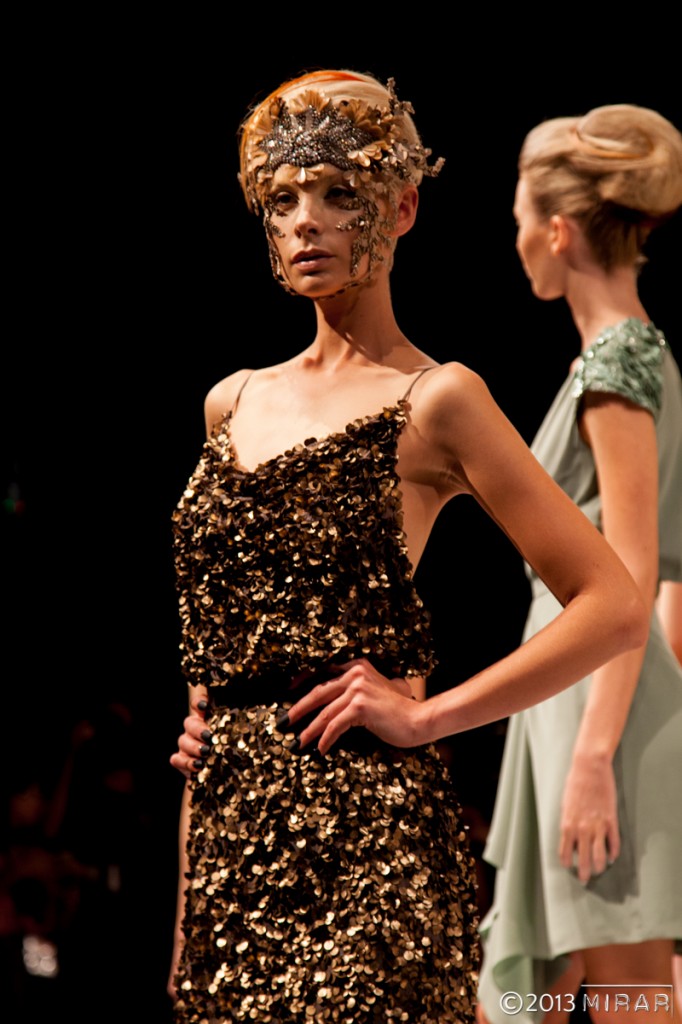 The makeup featured a “beautiful gestural paint flick across the eyes depending on which outfit the girl is wearing. If she’s wearing black we’ll make it white to make it more pure, if the girl is wearing white, we use black to strengthen it up a little bit” said James Molloy, who directed makeup for MAC. This feature eye was created using MAC Chromacake in Black, White and Polished Ivory. The skin was made to look “boosted and hydrated” with the new MAC Mineralize Moisture Fluid Foundation and lips were left soft and natural with an application of MAC Lip Conditioner Tube. 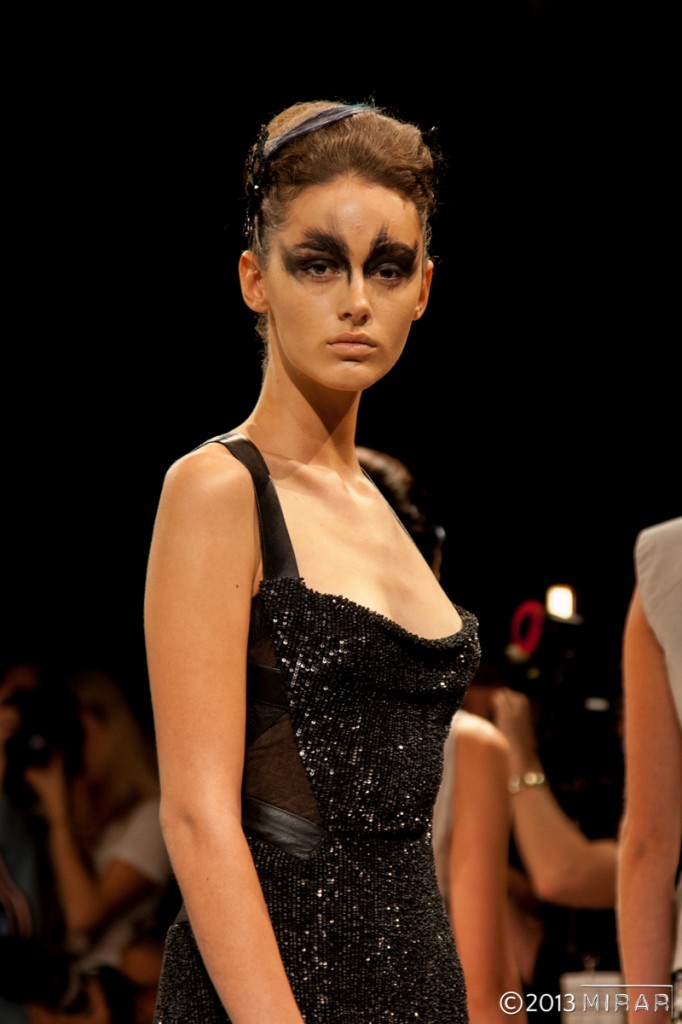 Nails by OPI were “deconstructed” to fit with Aurelio Costarella’s “deconstructed range of clothing”, said OPI’s Karon McKendrick-Taylor. The first nail look was “double-dip[ed]… silver” in OPI Radiance, while the second was matte black OPI Onyx with diamantes scattered across the nail.

CLICK HERE FOR COUTURING’S COVERAGE OF THE AURELIO COSTARELLA SHOW

With the Bec & Bridge girl being sexy and approachable, at their show at MBFWA, hair was directed by Alan White for ghd, who created a messy, Japenese-inspired bun. White says, “a Japanese carp was the original reference for the show… so I’ve done some hair origami… then splayed our the ends and painted a little pearlescent colour on them to represent the fish tail”. 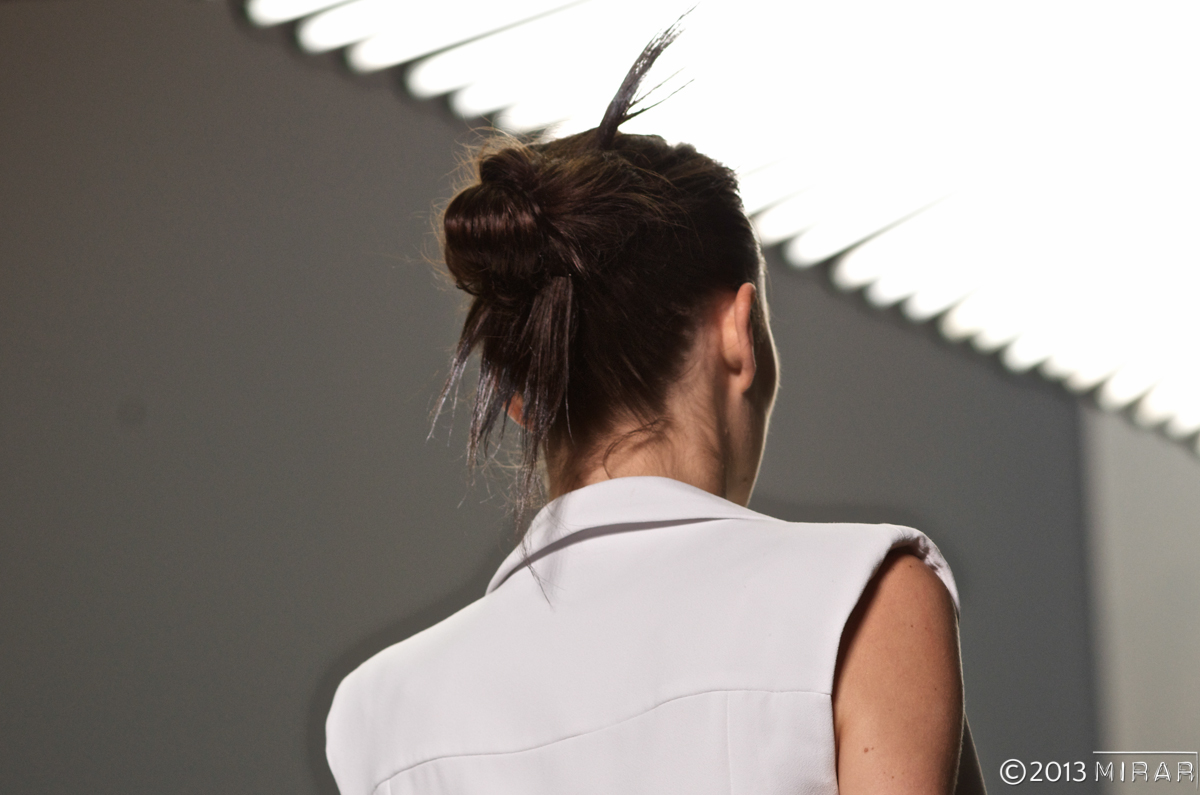 MAC created “a bit of a ’90s girl” with a look that was “a bit undone”, says director Nicole Thompson. To match the rose gold accents in the collection, a reflective rose gold eye was the feature of the makeup, with MAC Vintage Rose as the base, followed with a MAC Pigment in tan and pink bronze shades. To give a reflective effect on the runway, this was lacquered with gloss. Some gloss was also applied to the lips and cheeks, so that models looked “a little sweaty” and “super mannequinned” on the runway. 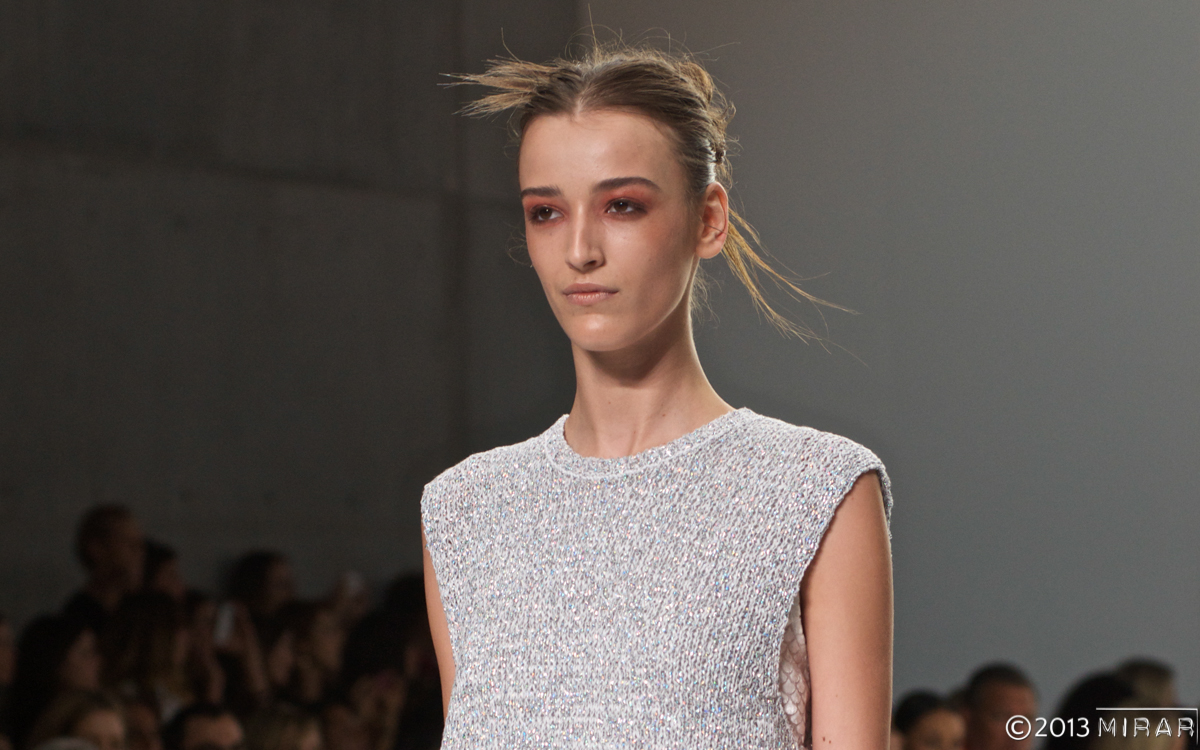 Nails were directed by Gina Schacht for OPI, with two polished layered over one another: Don’t Pretzel My Buttons and Coney Island Cotton Candy. This was given a shiny top coat for a “nice, natural look”.

CLICK HERE FOR COUTURING’S COVERAGE OF THE BEC & BRIDGE RUNWAY

Inspired by “1950s American Heiress Lady Keith and others of her ilk”, models at Christopher Esber appeared “waspy, polished perfection, with a slightly raw edge.” 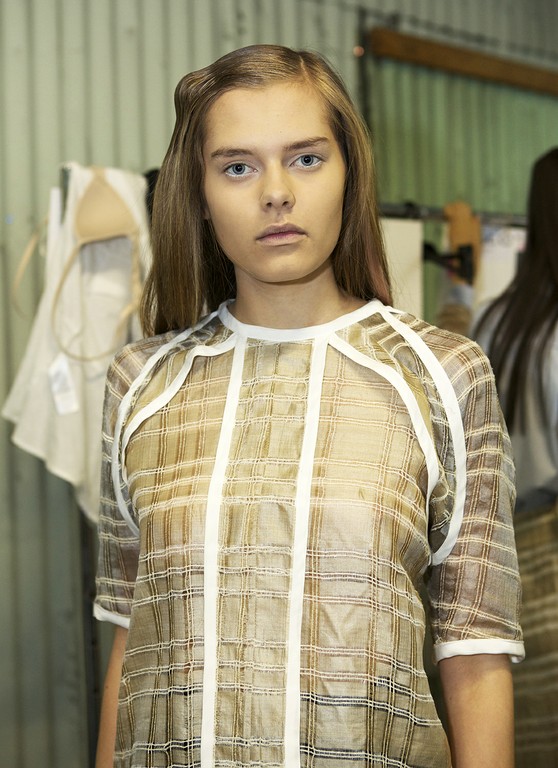 Renya Xydis for Wella Professionals created a hairstyle that was “masculine but feminine at the same time”, long sleek tresses given an edge with a modern ‘bump’. Hair was blow-dried and ironed straight, and the bump moulded onto the hairline. Xydis says, “it’s like an exaggerated hairline and it’s a mould – it’s a bit of a sculpture on the head”. Wella SP Perfect Hold Hairspray and the Wella SP Hydro Finish were used on the ends and Wella Professionals Perfect Setting to set the style.

Matte “velvet” was the only texture that Napoleon Perdis (for Napoleon Perdis) was interested in for the face at Christopher Esber. “I’m mattifying her so there’s not an inch of moisture left on her,” says Perdis. This was achieved by using Napoleon Perdis Camera Finish Powder Foundation as a base, and a peep of apricot near the eyes for “raw definition”, so that it looked “as if a very beautifully put together woman has just woken up”. A swipe of Napoleon Perdis DéVine Goddess Lipstick in Harmonia finished this matte, naked makeup look.

Christopher Esber had custom nail press-on’s developed by Manicare, which were grey with blue accents to complement Esber’s collection. Manicare director Zoe Vokis says, “walking through the runway, the stylist really wanted to see the splashes of the blue underneath – almost inspired by the Louboutin shoe with the sexy red heel, they wanted to have the sexy blue underneath”. Nails were prepped first with Manicare Cuticle Remover and Cuticle Oil.

As an extra touch, La Roche-Posay prepped the models’ skin, Director Nadine Monley saying “we’re making the girls’ skin look as beautiful as possible before they have make-up”. Skin was first cleansed and massaged with the brand’s Dermo-Cleanser for sensitive skin, followed by a spritz of Thermal Water, the key product. This was left on the skin for a few minutes to absorb, and the light Rosaliac Moisturiser was then applied.

With slightly tousled S-waves, the long flowing locks at White Sands gave a ’60s vibe that complemented the retro-inspired prints in the swimwear designer’s collection. Redken Hair Director Paloma Rose Garcia explained that “it’s the backcombing at the crown which is really key to accentuate the 60s feel”. 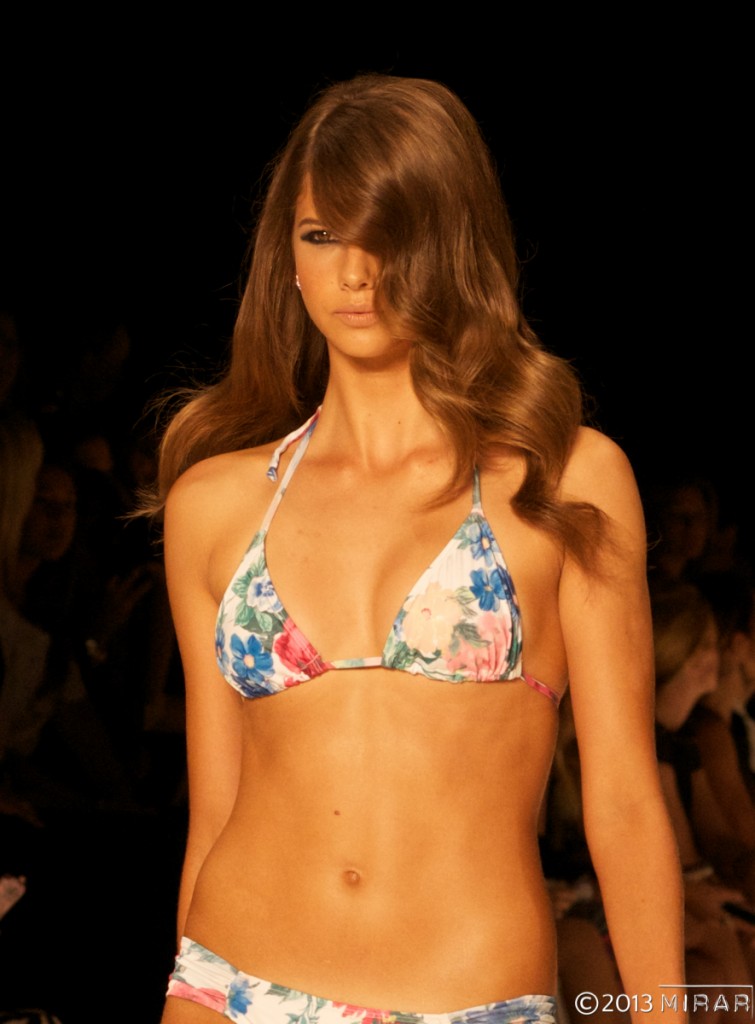 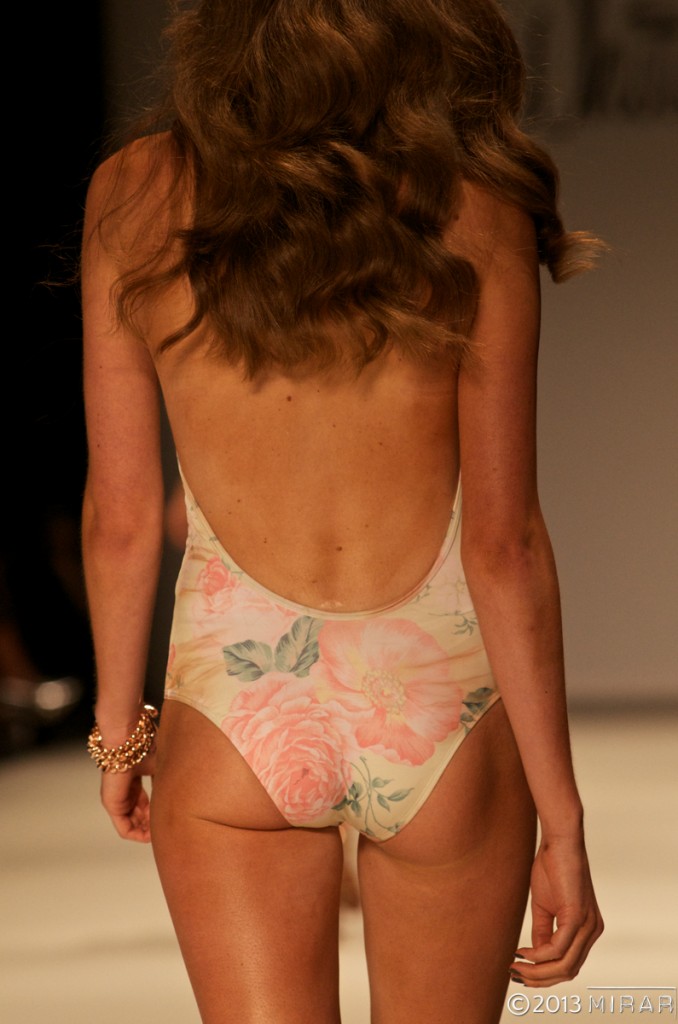 3) Curl hair on the lower half, starting with the back of the head. Wrap hair around the iron towards the face, spraying with Fashion Work 12 Versatile Working Spray ($26.95). Pin curls to scalp to cool. Avoid curling above the brow area to keep the wave soft and relaxed

4) Remove pins and shape wave with brush. Spritz with Fashion Work 12 to set the style.

Make-up artist Mia Connor, sponsored by Erin Bigg Cosmetics, was asked for something “on-trend and edgy” and so gave models a smokey eye, off-set by matte, nude lip. A palette of four shadows was used to create a sexy and intense smokey eye.

Nails were directed by Karon McKendrick Taylor for OPI, featuring OPI Get Out of My Expresso Lane, applied in two coats. This grey-based shade is a great trans-seasonal colour that has a glossy, high-shine finish.