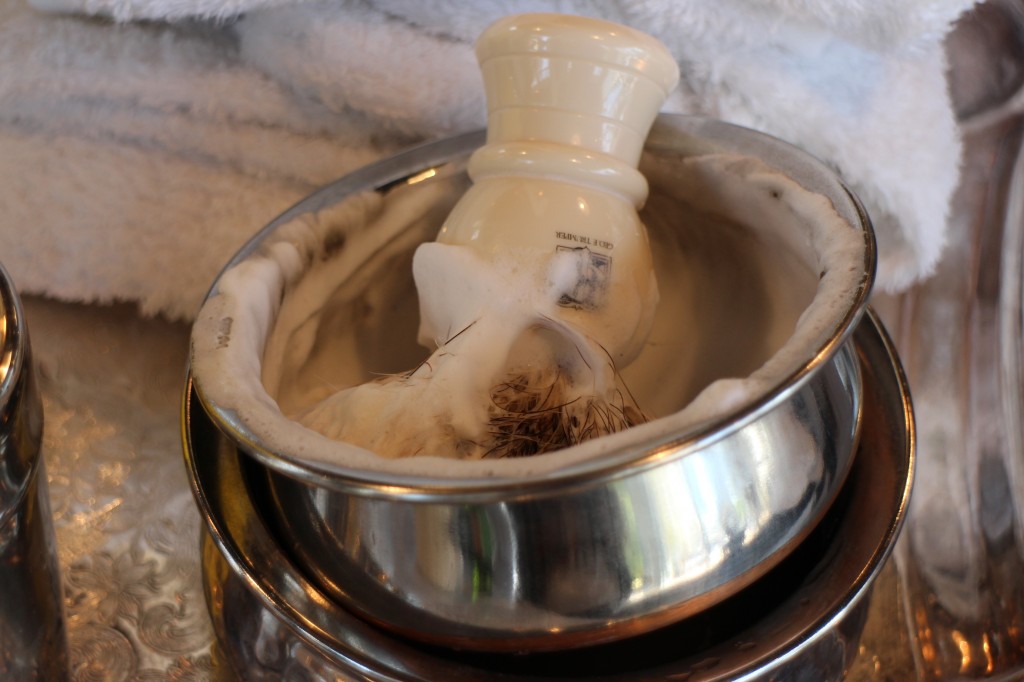 Barbers enjoy a rich tradition dating back to at least the 14th Century in Europe, and for half a millennium, Barbers performed surgery and dentistry in addition to haircuts and shaves. Indeed the traditional Barber’s pole of spiralling red and white stripes represents the two crafts which were performed by the guild – barbering (white) and surgery (red). Thankfully, this grand tradition is faithfully maintained in the 21st Century by Kings Domain in South Yarra. And while Appendectomies may not be on the bill of fare, surgical precision is nevertheless an hallmark of this latest addition to the South Yarra salon scene.

The brainchild of Aaron Chan – a protégé of celebrated stylist Joey Scandizzo – Kings Domain isn’t simply a throwback to the traditional Barber Shop, but rather a reinterpretation of this time honoured practice which will appeal both to the traditional gentleman, as well as the expanding hipster community. Aaron honed his craft during his 8 years at Joey Scandizzo’s self titled flagship salon (formerly Rokk Ebony), however, during a sojourn through South America, he encountered classical barbershop in Argentina, and was inspired to forge a new path, collaborating with his mentor to conceive a modern man’s style sanctuary befitting a royal charter. 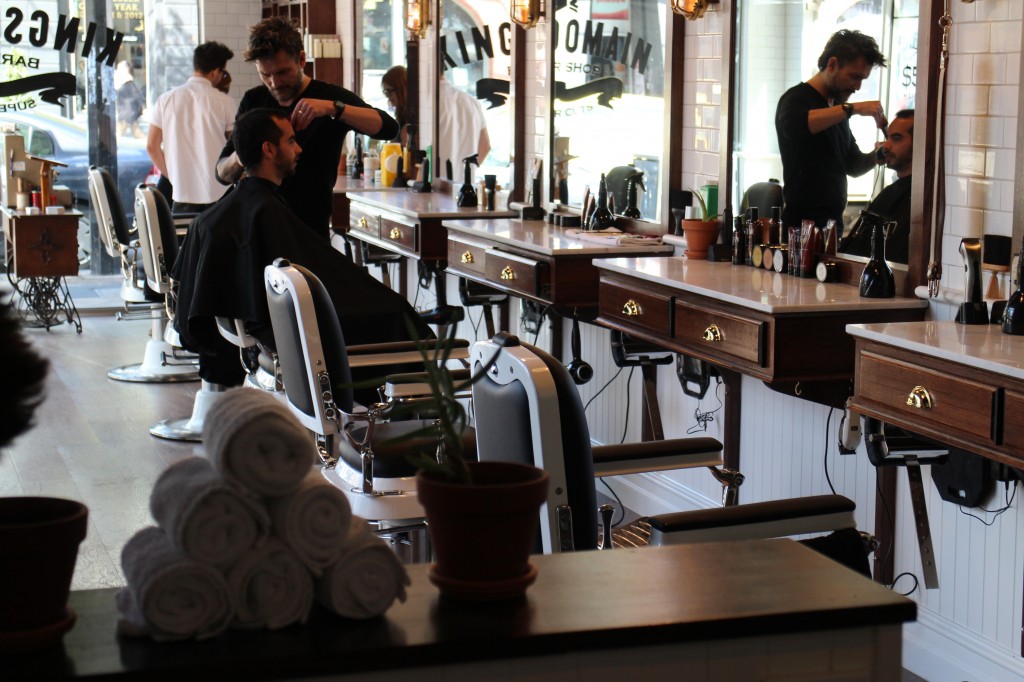 This vision is clearly expressed by the exquisite design and fit out of the salon, where cool white porcelain and marble is contrasted perfectly with the warm and earthy oak timber and leather. This is rounded out beautifully by superb brass light fittings, and a mounted stag’s head on the back wall gives the space a distinctively masculine club-like atmosphere. Despite backing his considerable skill in dealing with even the most demanding of customers at Joey Scandizzo, Aaron enjoys the more casual atmosphere at Kings Domain, which he feels fosters his creativity. “I guess most customers are a little more relaxed here.” Aaron says. “They’re often just happy to leave the style up to me. Most guys just want a hassle-free experience, and to look good at the end of it”. Buoyed by his passion, I decided to put my faith in Aaron’s skill and opted for the Royal Treatment (scissor cut & shave) with a clear brief – make me beautiful.

After a most relaxing shampoo and scalp massage, I was offered my choice of refreshment. A cursory glance at Aaron’s vintage Omega Seamaster revealed that the sun had just passed its meridian (in the Marshall Islands), and accordingly, I opted for a beer. My hard earned thirst having been quenched, Aaron proceeded to demonstrate his adroit talent with the scissors which had earned him such esteem across the road. And while his attention to detail was at all times evident, it was clear that Aaron also enjoyed the opportunity to engage in some friendly banter, particularly when it came to his love of surfing and travelling. Contented with a fresh new hair style, and engaged by captivating conversation, I was ready for my cut throat shave. Given my fond memories of a traditional barber shop in the Toorak Village, and my customary routine of shaving each day, this was the element of the treatment which chiefly piqued my interest. 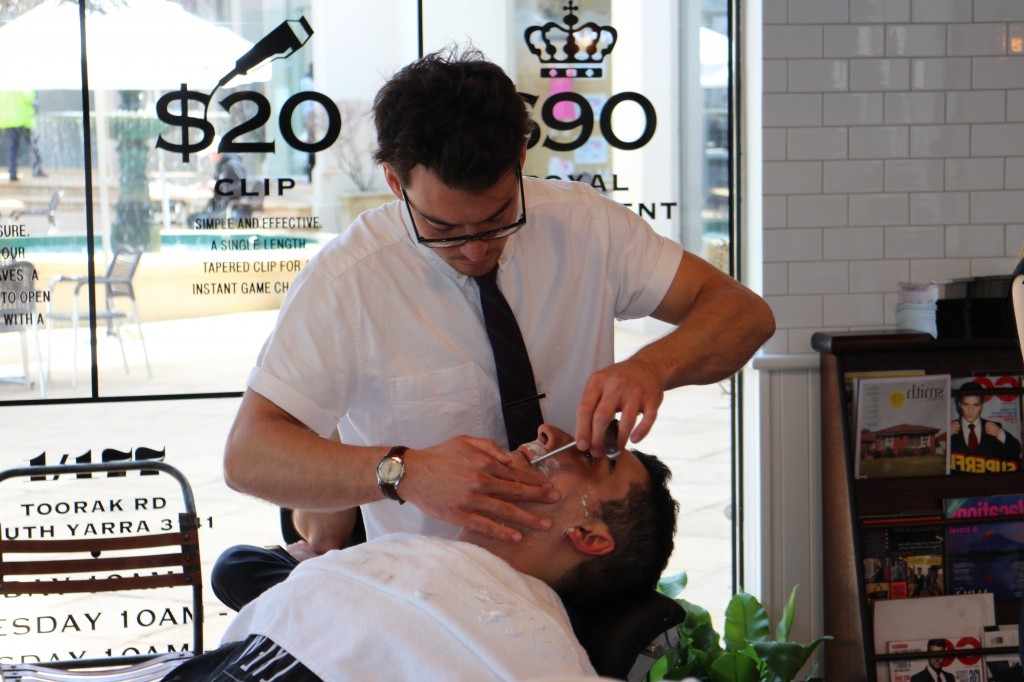 A pre-shave cream was applied to my face, followed by an hot towel to soften the facial hair and prepare it for shaving. Proraso shaving soap was then dutifully applied with a Geo. F. Trumper badger hair brush, before the commencing to shave firstly with the grain. Aaron dispensed with the myth that the closeness of the shave was driven by the type of razor (i.e. straight blade vs disposable). “if you were to shave at home only once, a standard 5 blade razor would normally give a closer shave than the straight blade”. Adding that it was the combination of the multi directional shave, and the barber’s skill at ensuring that the facial skin was always taut that delivered an incredibly close shave. After the initial shave, an ice cold towel was applied to my face which cooled the skin and helped it relax once more. Thereafter, Aaron repeated the process, this time against the grain. Following the second shave, my face was wiped clean, and Pinaud Clubman talc was sparingly dusted over my face to help prevent any irritation. This is of particular importance when wearing collared shirts.

Throughout, assiduous precision and respect for traditional methods was balanced with a relaxed and comfortable atmosphere. The result is an ambience which is luxurious and yet dignified – A guilt free indulgence that every modern gentlemen should savour.