Fine, delicate jewellery is all well and good for some, but Leeyong Soo is having none of it. The Style Wilderness blogger and designer behind the Wilderness Bazaar label has created a range of earrings for women who like to make a statement with accessories, yet which are comfortable to wear and simple enough to work in with any outfit. Here, she speaks with Couturing about Wilderness Bazaar and how the range came about. 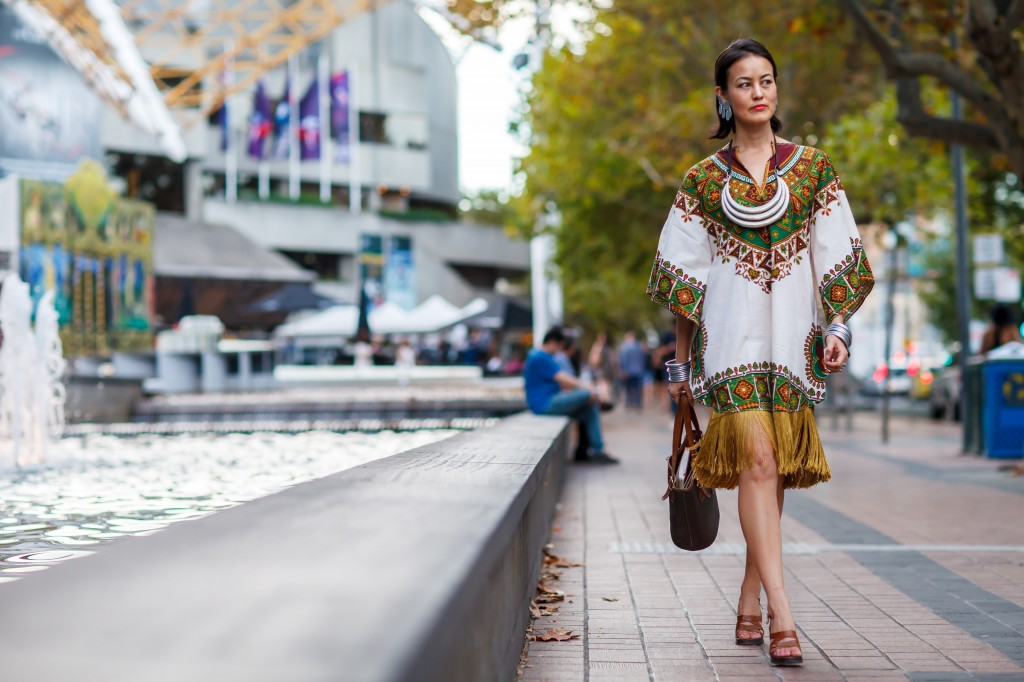 Tell us about your career background and how you got interested in accessories?

I’ve always loved making things from bits and pieces – when I was little I would make dresses for my dolls out of bits of ribbon and so on, and started making my own clothes when I was in high school. When I finished uni I moved to Japan, thinking I’d stay for a year or two to improve the Japanese language skills I’d learnt during my arts degree. I ended up working as a fashion editor at Japanese Vogue magazine and lived in Tokyo for nine years all together! During that time I spent many weekends browsing at flea markets. Japanese flea markets are the best! A lot of older Japanese women don’t have their ears pierced so there are always heaps of clip-on earrings, which was great for me as I don’t have my ears pierced but it meant I could still experiment with earrings. One of my favourite memories of Vogue was when Anna Dello Russo joined us and would fly in for planning meetings. I was translating for her when she was telling the fashion editors that we needed to make the fashion pages bolder and use things that were more colourful, more exciting and so on. She turned and pointed at my earrings (which were 10c from a flea market!) and my DIY dress and said “like what she’s wearing”. Yep, Anna Dello Russo noticed and complimented my earrings! If ever I had wanted proof about the power of accessories to make an impression, there it was!

Were you already making your own jewellery and accessories at that time?

I can’t remember when I started making jewellery but I was probably fixing or reconfiguring things that I had bought at the markets. I don’t often make jewellery completely from scratch, I usually alter existing pieces by removing bits or combining the clip section of one set of earrings with the dangle section of another, for example. But a few years ago I decided I’d like to have a go at designing some jewellery myself, and that is one of the reasons I started Wilderness Bazaar.

What were your inspirations when designing your range?

I’d bought and altered some earrings at an op shop in Melbourne that were a bit like ear cuffs, and I wanted to make something similar. So the first earrings I designed were also the ones that get the most comments whenever anyone wears them – the “Phoukham” style. I based the rest of the range around the same shape, which is designed to follow the shape of the ear. Another consideration was that even though I wanted to make big earrings, I wanted them to be comfortable, so they couldn’t be too heavy. They also had to be styles that could be worn with various outfits in various situations, I didn’t want to make only special occasion pieces, so the shapes are quite simple. I wear them with everything and they are so light that sometimes people will comment on them and I have forgotten I’m even wearing them! 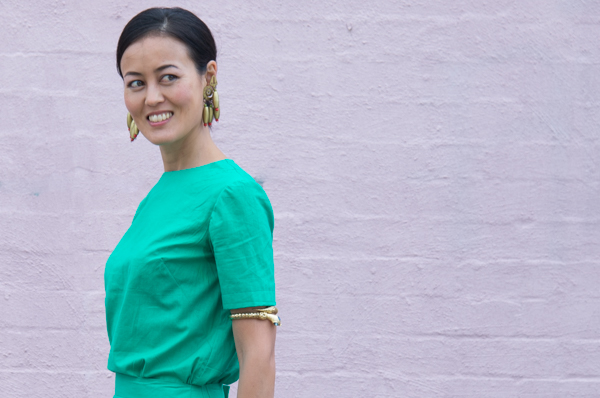 The materials used for the Wilderness Bazaar earrings are a bit out of the ordinary. How did you discover them?

At the moment, Wilderness Bazaar has two ranges, although I hope to add more in the future. One is made from recycled aluminium and the other is made from buffalo horn.

The recycled aluminium pieces are made by villagers in Laos. Through doing some work with various fair trade organisations while I was in Japan and back here in Melbourne, I became friends with the family that owns Mulberries, a certified fair trade organic silk company that has been running in Laos for more than 20 years. Before I started Wilderness Bazaar, I’d been talking to them about setting up a fair trade fashion or accessories brand of my own, and they suggested I travel around Laos with them to meet their producers and get an idea of what was possible.

Near their mulberry farm in Xieng Khouang province, I visited the village of Ban Napia which is well known for its spoons and other small items made from recycled aluminium. Originally, a lot of the aluminium came from bomb casings because Laos was very heavily bombed during the Vietnam War (much of the farming land in Laos is still being cleared of unexploded ordinances and nearly every family knows someone who has been affected or even killed by exploding mines). These days, they still use bomb casings when they are found, but they also use scrap from cars. The villagers melt down the metal in kilns in their backyards and pour it into brick moulds to make various objects. I loved how these objects were so light and even though they were metal, they were matte rather than shiny and had a handmade look to them. Having seen how they made the other objects in the moulds, I thought they might be able to make earrings, so I got them to try making a few samples using my designs.

A little while later I was in Vietnam and got obsessed with jewellery made from buffalo horn – it’s a really beautiful natural material because it is very light to wear and there are all kinds of colour variations. I was talking to a lady who sells all kinds of souvenirs at the Ben Thanh market in Ho Chi Minh City and asked her if she knew anyone who made things from buffalo horn – she said she knew a family who make items, so I got her to get some samples made and put in an order as soon as I saw the beautiful results. 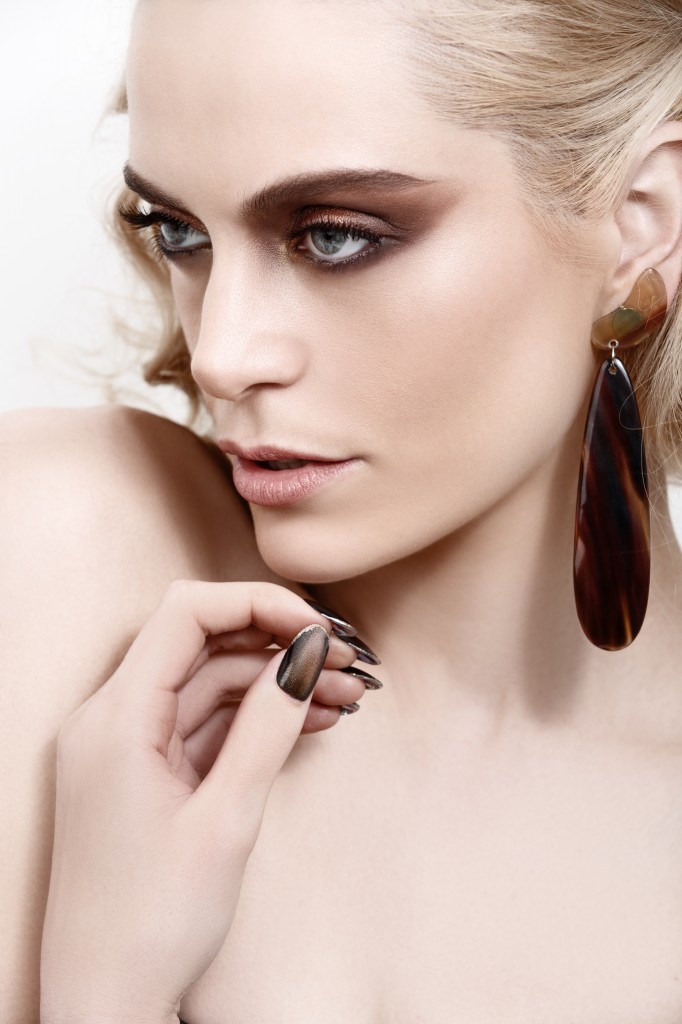 It sounds like social issues and sustainability play quite a big role in your design process. What are your plans for future ranges?

The aluminium pieces are made from recycled scrap metal and the Lao villagers making them work under fair trade conditions; the buffalo horn is a natural material that is a by-product of the meat industry – the whole animal is used in some way, and definitely not slaughtered only for its horns. So yes, I do support fair trade and family businesses along with recycling and other sustainable practices as much as possible, and hopefully people who purchase my designs will also be interested in their back story.  I’m still in love with the materials I’m using now, so future ranges will likely incorporate them again in some way, but whenever I travel I’m always on the lookout for inspiration from traditional techniques and materials. My dream for Wilderness Bazaar is embodied in the name – one day I’d like to have a virtual “bazaar” selling items I’ve designed in collaboration with people living in remote areas that we might think of as “wilderness”.