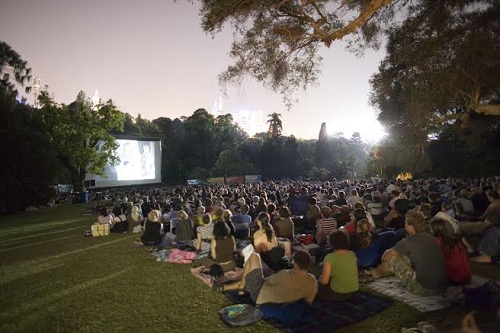 Last night the Melbourne Maltesers Moonlight Cinema opened its gates in the Royal Botanical Gardens for the preview screening of comedy sequel Anchorman 2, the legend continues. Lucky enough to enjoy the VIP treatment and greeted with a glass of fizz and beanbag, we were definitely watching the screening in style. The sun went down over the view of Melbourne’s CBD and the screen was inflated for all to see.

After announcing it’s line up of preview, contemporary, classic and cult films a couple of weeks ago, the audience were kitted out ready to enjoy cinema under the stars last night. Blankets, quilts, cushions, picnics, beer and even a couple of dogs thrown in for good measure.  I would definitely recommend opting for the Golden Grass option if you’re heading straight over from work or an out of town visitor and refreshments are available at the venue.

With a packed line up coming up, sure to be crowd favourites are the second Hunger Games, Catching Fire; the action thriller starring Tom Hanks, Captain Phillips; the crime drama directed by Martin Scorese and starring Leonardo DiCaprio, The Wolf of Wall Street; and the eagerly anticipated sequel based on the Marvel comic character, Thor: The Dark World. Not forgetting the classic Dirty Dancing and Grease sing-along  and the critically acclaimed Blue Jasmine with Cate Blanchett.

The second half of the programme will be announced on the 1st February running all the way until 30th March 2014. Moonlight Cinema has cinemas in the following cities Adelaide, Melbourne, Sydney, Brisbane and Perth.

For full listings on what’s coming up and how to buy tickets head to: www.moonlightcinema.com.au