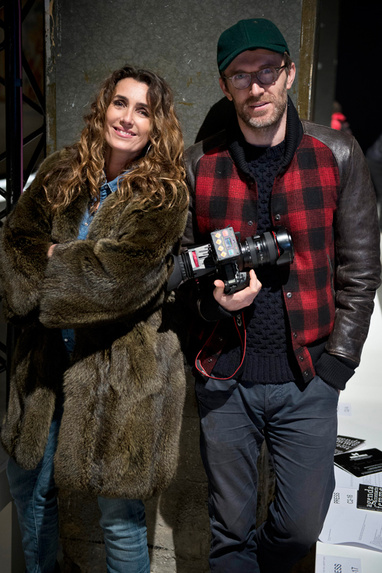 A combination of guilty pleasures for a Sunday afternoon, fashion and French, Dressed for Winter explores a behind the scenes look at fashion weeks across the globe, interviews with designers, models, behind the scenes footage and frow celebrity action. Presenter and fashion editor extraordinaire, Mademoiselle Agnès takes us through the various shows of New York, Paris, Milan and London.

Talking Chanel with Karl Lagerfield, asking David Beckham which underwear he prefers and raving about Celine are just a few of the hilarious insights from Agnès. Designer shows include Balcengia, Vivienne Westwood, Louis Vitton, Marc Jacobs and Victoria Beckham. We also hear from fashion designer Jeremy Scott with his top five tips for surviving fashion week.

The main highlight of this vivacious documentary for me was the collection preview of 22 year-old Simon Porte Jacquemus. Working a “normal” job whilst designing in the evenings, he presented his collection at a swimming pool in the centre of Paris, to an audience of many including his grandma and his nephew, who when asked says he wants to become a designer when he’s older. His relentless excitement and humble approach to fashion week is inspiring, thanking his models and even having a little dance at the end of his show.

And as for Mademoiselle Agnes her outfit changes and quick wit make this documentary both humorous and stylish. A perfect watch for any fashion lover.

The screening was provided by the ACMI as part of Vive la Mode, Fashion on film from the cultural programme of VAMFF.