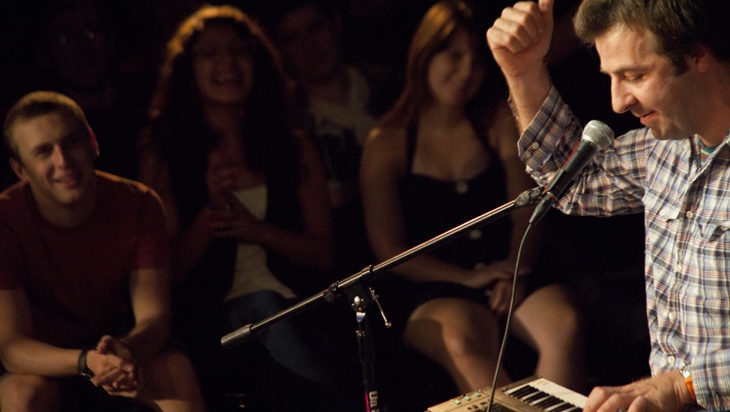 Walking down Swanston Street, it’s easy to see that the Melbourne International Comedy Festival is well and truly underway.

The corner of Collins and Swanston is littered with people surrounding the Melbourne Town Hall, home to the comedy festival. Budding comedians with flyers and  spruikers with free tickets beckon you to come see their show. However, for the likes of Irish comedian, David O’ Doherty, there is no contest.

O’Doherty has been acquainted with shows on Comedy Central in the US, is a regular face on British and Irish television and is a household name in many countries around the world. The Dublin born, self-confessed- homeless version of Chris O’Dowd (Bridesmaids and The IT Crowd) is playing to almost full houses this season, so be one of the lucky few that snap up some of the last remaining seats.

O’Doherty speaks of first world problems- such as iPhone’s and Instagram, the Irish Swastika laundry company (unrelated to Hitler and WWII) and his love for bicycles. O’Doherty comfortably transitions from stand-up comedy to a range of songs played slightly out of tune, all part of the charm. One of my favourites was the last song ‘Carpe DO’ Dieming’ putting a humorous spin on motivational quotes people upload via Facebook and Instagram (we all have those friends, some of us ARE them).

David O’Doherty is one likeable man, and incredibly relatable. As the show went on I felt as if I was listening to an old friend tell a bunch of hilarious stories. It’s a refreshing feeling entering a room to sit there and laugh for an hour, I left the theatre feeling uplifted, so thank you David.

For all other David O’Doherty showtimes click here: www.comedyfestival.com.au/2013/season/shows/seize-the-david-o-doherty-carpe-do-diem-david-o-doherty