Mercedes Benz Fashion Week Day 2 was full of innovative hair and beauty looks, with some amazing styles heading down the runway.

Across the shows we saw a minimalistic theme develop with natural and subtle looks and a general ban on foundation. Interesting styles were created on eyes, with crease liner and subtle use of bronzer instead of eye shadows on lids.

Aurelio Costarella – Makeup by MAC Cosmetics and Hair by Goldwell

The inspiration for the Aurelio Costarella show were the photographs by Man Ray from the 1930’s. 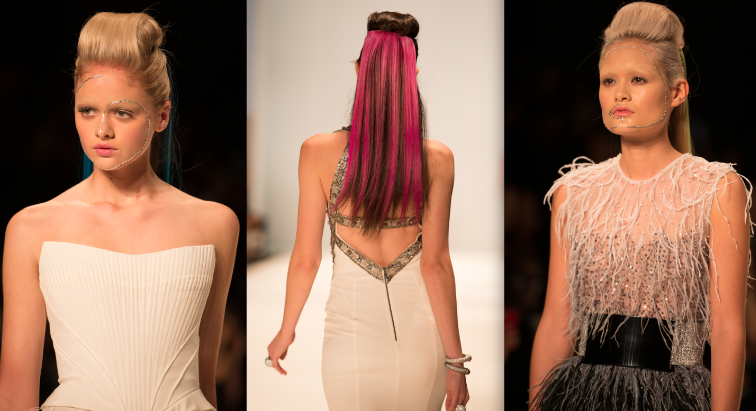 Lee Preston from Goldwell said of the look created for the show “What we wanted to do on the catwalk is work with something that was really strong and directional. We’re working with a lot of colour in the collection this year, and colour within the hair. So we’ve used a collection of four colour tones, mixing Goldwell Elumen colour together to create really strong looks. We’ve gone for a square quiff-effect on the top of the hair with really sleek sides. The back is all about the length and then the colour weft is going in the back of the hair. Our main hero product today is the Hot Form, which we’ve used to prep the hair. The Hot Form is really good for setting hair, using as a blow dry product. Then we’re using the Definition Style Fix Hairspray to give the hair a fixed, slick feel, and then we finish it off with the Style Fix Shine Serum to give the hair a glossy finish.” The resulting looks were a sea of colour on the models’ heads, contrasting with the dark pieces of the collection and complementing the colourful gowns of Aurelio Costarella’s collection.

On the makeup front, MAC Cosmetics created two looks for the show. The main look was inspired by the Parisian 1930’s slightly melancholy beauty, so a really rounded eye was created. James Molloy from MAC said to create the look “we used lots of mascara top and bottom to give them that doe-eyed Betty Davis eye-style…we’re using a platinum gloss over the lids so that there’s a lot of softness and it’s a dreamy, mesmeric eye.” For the lip, Lip Mix in Crimson and Burgundy were used, creating red wine lip. There were also five girls in the show whose faces were laced with very fine line of crystal creating an amazing light down the runway.

Alex Perry – Make up by Napoleon Perdis and Hair by ghd 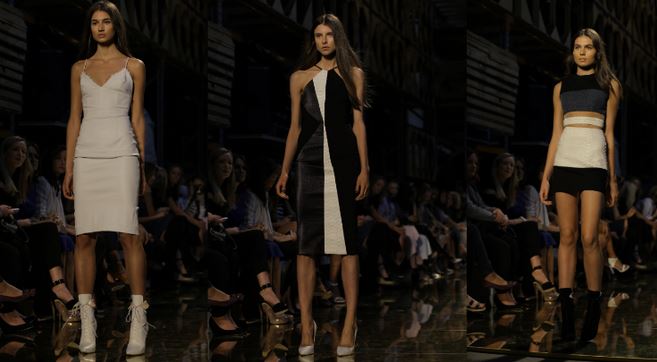 The inspiration behind the makeup look was a “street smart, effortlessly cool but edgy girl…very sports luxe” says Nicola Snell and Tanya Tiropanis of Napoleon Perdis. Skin was kept fresh and translucent with highlight and sheen on high points of the face, with a nude balm on the lips to create a bit of glimmer. Cheeks were balanced with a matte bronzer for a natural-looking flush.

Hair was kept fresh and natural,  and was all about letting  the clothes speak. Sophie Roberts from ghd said that “It’s all about creating really beautiful, effortless styling today – starting with a great hair cut, freshly washed hair and working the Total Volume Foam from roots to ends and air drying it. We’re just activating a hair cut, giving the hair some spirit and life.” Final Shine Spray was added for some gloss and Final Fix Hairspray for hold.

Ellery – Makeup by MAC Cosmetics and Hair by ghd 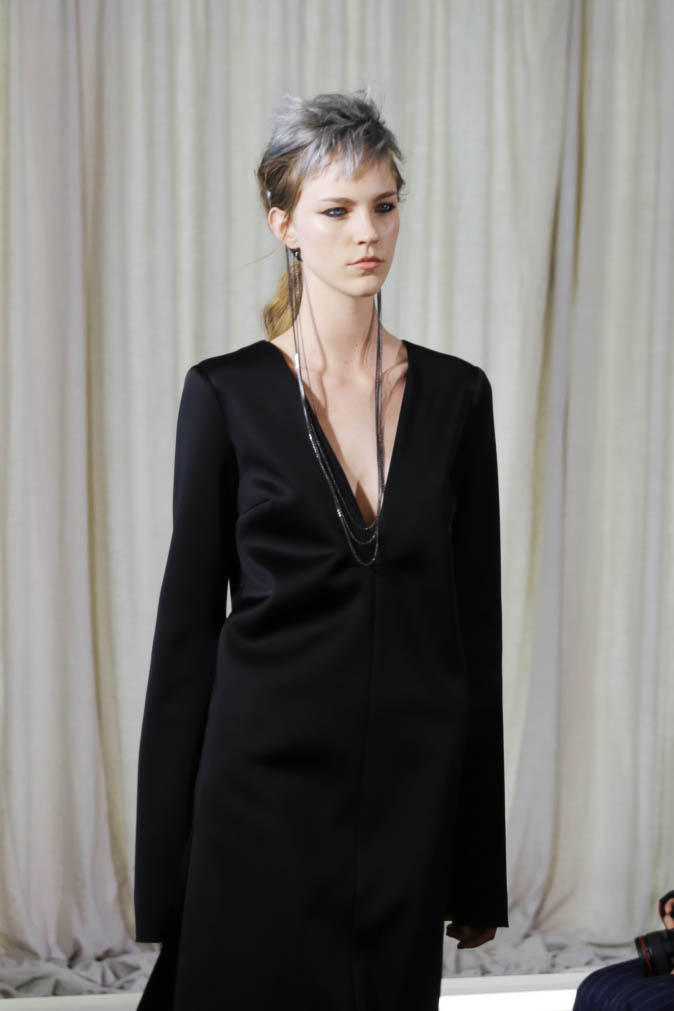 James Molloy for MAC Cosmetics was inspired by what he called “precision punk, because she’s a little bit of a punky tomby girl” A straight eyeliner used on the eye in a more “worn it in” look. Skin was prepared using Softening Lotion to give the models hydration without looking greasy or oily – natural skin. “It’s a definitely morning after makeup not night before, she feels very lived in” says Molloy. Concealer was used sparingly, only where it was required to take away from any redness. Skin is raw but natural. Lip Condition was used to give the lips just a bit of shine.

Hair was also kept natural with ghd creating a look that worked on the models’ own look. Alan White from ghd said “the hair has a natural and real texture, with volume and body that’s brushed through”. To creat the look the hair was filled with Total Volume Foam first to give good hold and create modern texture. As White described “it’s like a salt spray without the salt. It gives hair a dustier finish rather than a polished finish.” Fringes were added to fit with Ellery’s boyish feel.  The top section is disconnected from the rest by adding the fringe piece in a colour slightly different from the model’s own. Added curl with the Mini Iron, created some curl and movement.

essie provided the nail inspiration for the day with the beautiful Sand Tropez, part of the Couture collection, used to give a neutral beige colour to nails.

Maybelline New York’s Makeup director Nigel Stanislaus created a natural look for this show. According to Stanislaus “this whole season is not about foundation, foundation is a bad word from backstage in New York to here, so it’s all about natural beautiful glowing skin, luminous with minimal coverage”. Maybelline New York’s BB Cream was used to create an evenness to the skin and FITme Bronzer was used to highlight cheekbones and nose. He also used the bronzer on the centre part of the nose and just uder the tip to dramatise the look as models’ walked under the lights. With an inch sized fluffy brush he swept it in a “windscreen” fashion across the lids to add colour – a great dual use for the bronzer.

Maybelline New York Baby Lips was melted on the back of the hand and applied to eyelids, tip of the brow and top of the cheek to add a glisten to the look and added to the lips for shine.

Kate McQuitty from Goldwell was inspired by structure and form in creating the beautiful criss-cross hair look for the show. It was a visually graphic look, with sharp and strong lines, “powerful and sexy at the same time” so that they stood out from the side. Three sections were used and then criss-crossed across the head and brought together in a ponytail. Sections were highlighted with Goldwell Elixir Oil.

By Johnny – Makeup by MAC Cosmetics and Hair by O&M.nyc 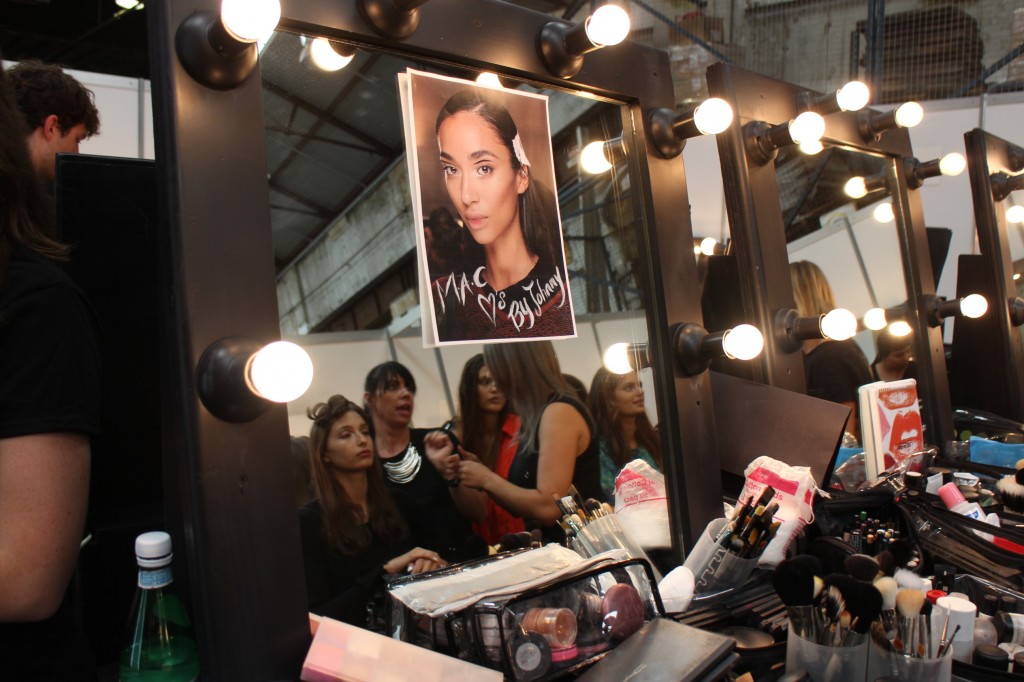 The inspiration behind this look for New York girl on the street who has just given herself a make-over that doesn’t look to over done says Nicole Thompson from MAC Cosmetics. Skin was kept raw but perfected, letting the freckles come through but the skin is shiny and highlighted. Using Strobe lotion, which is like a moisturiser highlighter so that the skin has a sheen finish but doesn’t look overdone. Blacktrack Fluid line was used to create a tapered and fluid flick on the crease of the eye that caught the lights on the runway. With the lights come out onto the girls we really want them to look highlighted and amazing, so we have given them highlight on the inner corners of the eyes using a cream colour base from M.A.C to stick it down and a metallic pigment called Kitchmass, which gives a metallic finish to that highlighted look.

For hair, the inspiration was quite and tomboy. O&M.nyc wanted to create a look that felt hard and soft at the same time, sleek and smooth. Whimsical tomboy quiffs at the front mixed with sleek smooth hair. 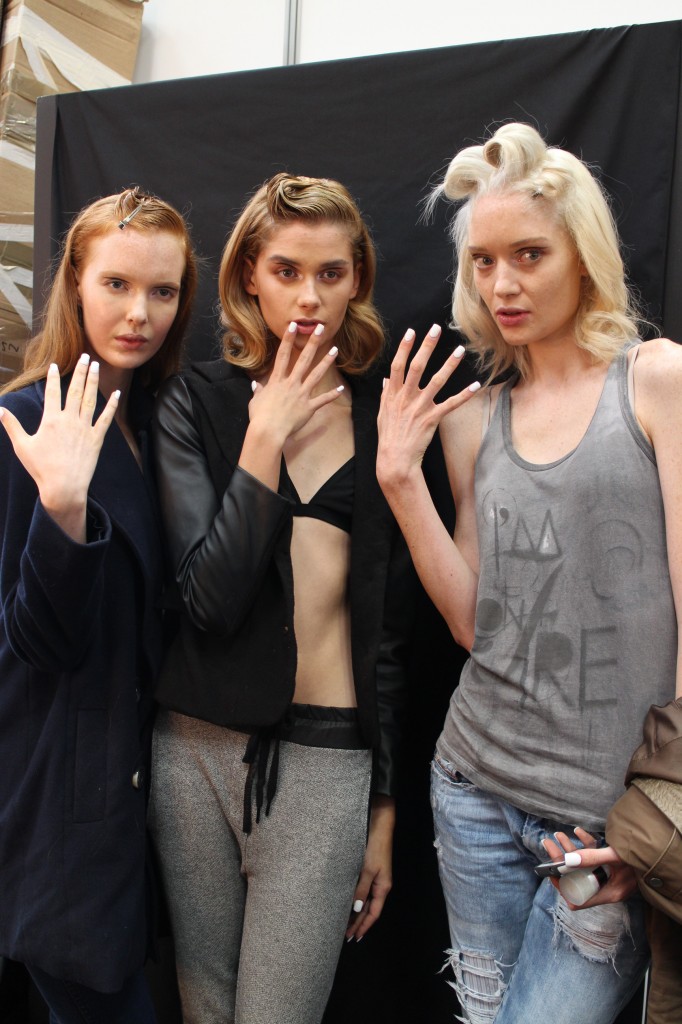 essie went with the white polish Blanc on nails to balance the bright colours of the collection. 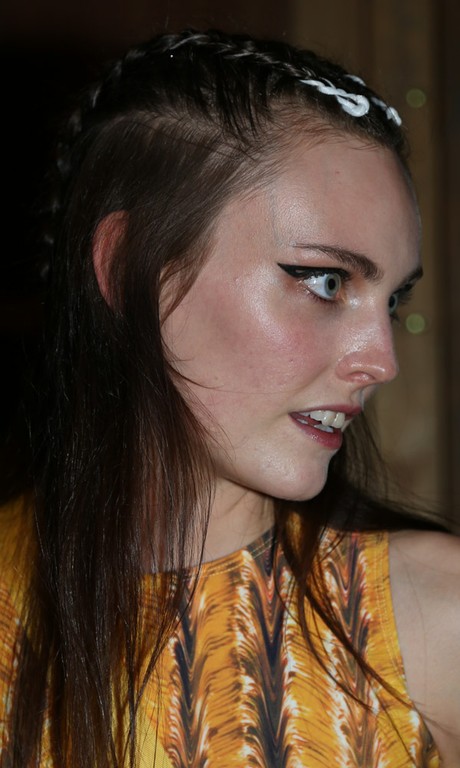 Maybelline New York’s makeup director Nigel Stanislaus created a tribal look for Desert Designs with a winged eye liner. The double flicked eye liner created a cat eye and the only cat eye that Nigel has prepared for this season’s runways.

Jayne Wild from ghd created a tribal look with accents of natural elements and colours. Of the look, Wild said “The Desert Designs girl is ethereal and a world traveller that the braided, effortlessly glamorous look suits her perfectly.”

Bec and Bridge – Makeup by MAC Cosmetics and Hair by ghd 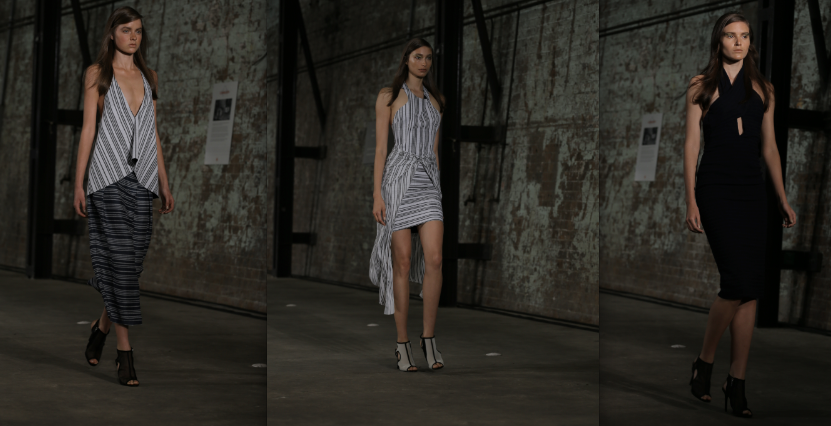 MAC Cosmetics created a look to complement the urban, summer tribe. “We are making them freckly, sun kissed, bronze and we using some shades of ochre more than anything to keep it warm and rusty. We are using shadester, a pro blush, and uninterrupted long wear eyeshadow in ochre colours and we are taking it from the inside out.” Brows were bushy and freckles were done with a stone lip pencil. A smear of gold liquid was placed under the brow like war paint.

Alan White from ghd “this year’s collection is inspired by the nomad – she is a traveler, naturally beautiful and ethereal. Her clothing is effortless and artisan and her hair moves as she walks. We’ve created a look that the Bec & Bridge girl can wear and recreate herself, encouraging movement through the ends, keeping it voluminous and airy with a deep side part for a touch of structure – the hair is sophisticated yet soft, which I feel emulates the collection perfectly.”

Gail Sorronda – Makeup by MAC Cosmetics and Hair by Redken 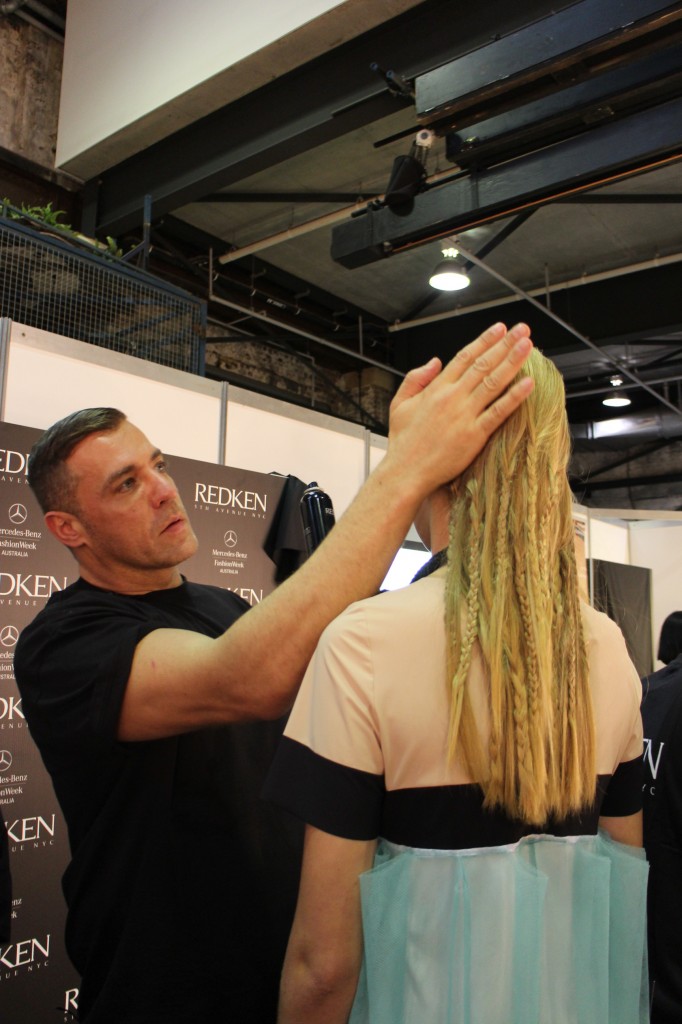 Inspired by Disney’s Little Mermaid, MAC Cosmetics Director, James Molloy, created a beautiful ethereal look with luminous skin. To create a light reflection on the skin to give water on the skin/mother of pearl skin look, Strobe Cream was used all over as a base. On top of that Soft and Gentle champagne gold was applied with a large brush to wrap around the models’ faces. Eyes were kept creamy with Shell Cream Colour Base and lots of mascara.

The hair look was created by  Redken Hair Director, Jon Pulitano (Headcase Hair, NSW) and emulated the extravagant theme of the collection with a wet-effect textured hair look. “For me, this hair look was inspired by an alien mermaid who has just emerged from the water and into another realm,” says Jon. To prep the hair, Redken Pillow Proof Express Primer was used to prep hair and Redken Rootful 06 root lifting spray to create the volume and Redken Iron shape 11 finishing thermal spray to add extra strength to the look. Showpony hair extensions were used to help create extra volume and length to models’ hair.