Trying to describe being taken on an explorative journey through time, space and sound through movement to tomorrow’s utopia, proves to be quite difficult. The answer lies purely in the experience of it. I took that journey Thursday night, when I saw and participated in BalletLab and Phillip Adams’ And All Things Return To Nature/Tomorrow. 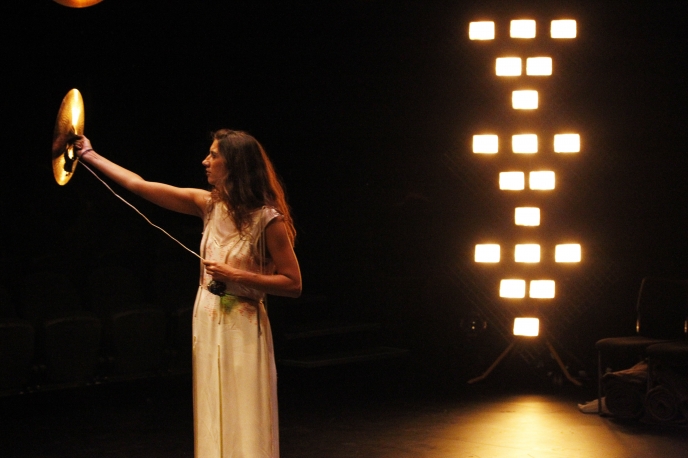 Upon entering the studio, each member of the audience was handed a white bag and instructed to take a seat as close to the front as possible (the seating was set up in the round). Thursday night’s performance was also known to the consenting audience as ‘Nude Night’, the audience knew they would be asked at some point to disrobe and place their items in the white bags provided. When and how would this be done? Nobody quite knew for sure, but we knew that at some point we would be naked.

Once everyone was seated, you could feel the presence of eyes. Gazes began to roam in anticipation of what was to come, lingering on each other and upon the minimalist set.

The performance began with a chorus of deep humming sounds that enveloped the dark space, continuing until it was all you could sense. The sound was constructing a space of natural security, lulling the audience into re-connecting with the earth and losing their ties to materiality.

The performers in All Things Return To Nature, Brooke Stamp (choreographer) with Deanne Butterworth, Rennie McDougall and Matthew Day, moved about to the experimental sounds engrossing the room. At first their movements were erratic, and pulled around by varying unseen forces. But then as the sounds evolved, their individual movements synced with one another’s and ultimately unified with the beat. This hypnotic synchronization of body drew focus on the actors and once again had the audience spellbound within the space.

Stamp’s choreography, alongside the soundscape created by Garth Paine, referenced 17th Century philosophy as well as the avant-garde jazz innovations of John Coltrane, Don Cherry and Sun Ra to explore the “notion that there is an inherent sound or rhythmic hum that permeates the universe” beyond the human ear.

What came next was a step outside of most people’s comfort zones. Phillip Adams, choreographer of Tomorrow, walked into the middle of the performance space and proceeded to ask the audience to join him; his voice was soft and inviting. He then asked us to disrobe and once we had, he gave us our next instruction; ‘find someone you don’t know in the room and introduce yourself to them. Then take a seat’. The speed at which some people moved away from their friends was surprising – including myself – while others stayed together, unsure of their movements.

The lights were dim but you could see everybody and nobody was hiding. The performers walked around the room, reaching for blankets and other materials hidden under front-row chairs. They proceeded to arrange the materials around the room, reconstructing The Integraton (a small building out in the Mojave Desert built in order to communicate with aliens).

Adams stood in front of me and asked if I wanted to participate. He asked me my name and questioned whether or not I was sure. “Yeah, I am,” I replied and he handed me a blue reflector before leading me into the performance space. Following me were another dozen or so members of the audience, but the feeling in the room was that everybody was participating and not just those selected.

The soundscape was again built and we entered into a void space waiting for direction. Adams’ aim and destination was to create a ‘tomorrow’ utopia: “an unsettled universe desperate to gather, confirm and sexualize a superlative energy united by a utopian impulse to liberate the mind.”

We were, through Adams’ work, leaving behind our world. He challenged our preconceived ideas of ‘today’ in order to enter ‘tomorrow’ as it would present us with new rules and experiences. The chaotic and impulsive choreography highlighted our human desire to move about freely and away from the forces that try to hold us back. Thus the acceptance to be abducted by aliens was a fitting end to the show.

And All Things Return To Nature/Tomorrow was a performance like no other, taking audience participation to the next level. This special ‘Nude Night’ was exclusive to Thursday night’s show, but having experienced it in that unique capacity, I can’t imagine seeing it any other way.