It’s the time of year where the weird and wonderful in beauty is out in full force. Paris Haute Couture Fashion Week sees a fabulous display of the latest designs for the northern Autumn with dizzying arrays of fantasy-inspired makeup and hair.

There was a predominant focus on clear skin and ‘barely there’ makeup at this year’s fashion week. The beauty looks were generally elegant and simple, but not without the odd runway pulling out a show-stopping style.

This runway was all about releasing the animal within. Jean Paul Gaultier stood out for its exaggerated hair styles with four different updo’s created by Odile Gilbert. Style One saw models’ hair fashioned into the “Chintilly Chignon”, designed to resemble a “tall, swirly mound of whipped cream”. The second look incorporated long hair extensions wound around sparkly rollers for an almost sci-fi style. Other models’ hairstyles included an extremely high topknot bun, and one of our most favourite and exciting looks saw animal leopard prints painted onto the hair.

Jean Paul Gaultier didn’t disappoint with makeup either, as artist Lloyd Simmons channelled the early seventies for inspiration. The focus point of the beauty look was a strong winged eye with thick black liner, white liner on top to open eyes and brown eyeshadows for shading. 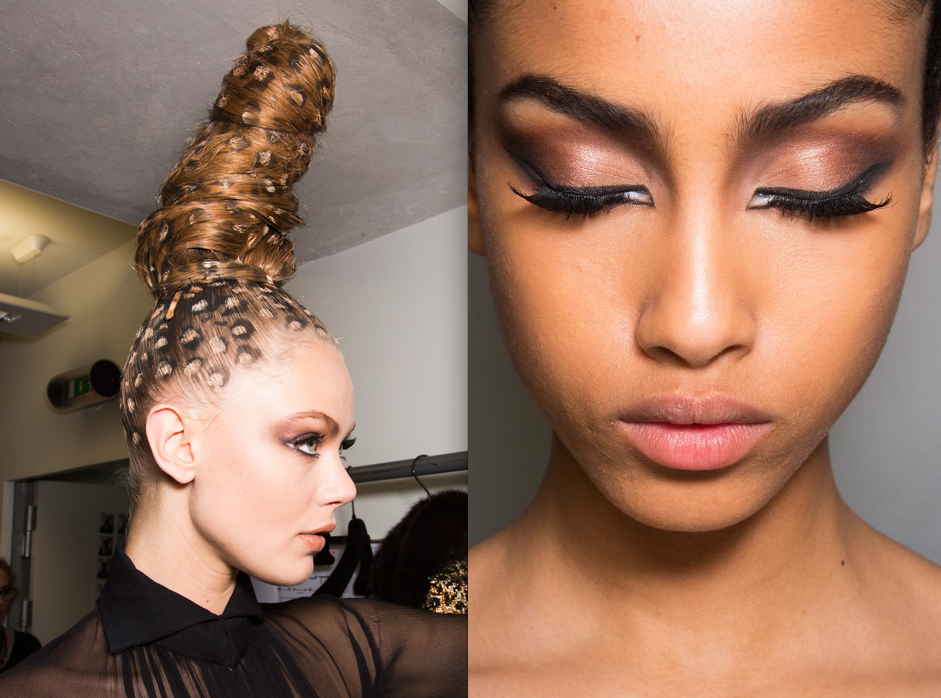 The beauty look at Valentino was feminine and beautiful with echoes of fairytale princesses. Makeup was soft and natural with dewy skin, pretty pink blush swept onto the apples of cheeks and petal pink eyeshadow and lipstick. Models’ hair cemented the fairytale princess look, with it was swept into a chignon with a centre part and finished with a delicate headband braid. 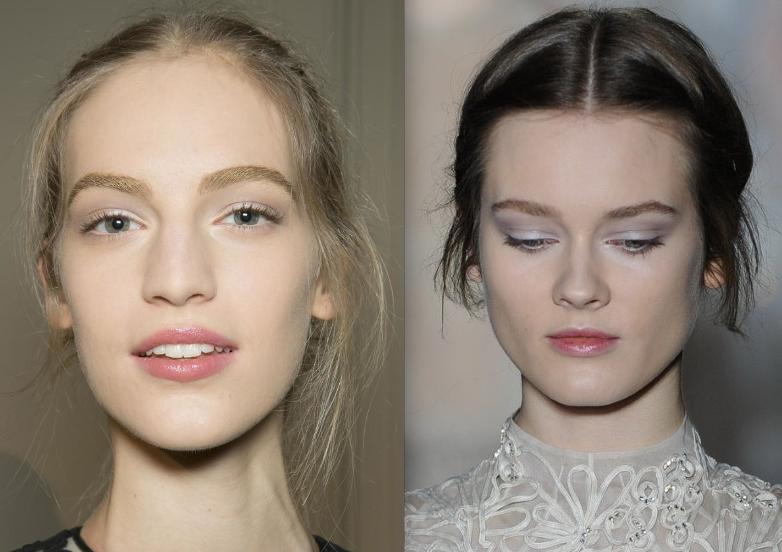 Flappers from the Gatsby era were centre stage at Armani. Elegance and sophisticated glamour oozed off the runway as both the hair and makeup were flawless! Linda Cantello created the 20’s inspired look focusing on luminous skin, silvery lids, no mascara and deep pink lipstick. The hair was styled into a faux bob, with the fringe slightly waved for an extra glamourous look. 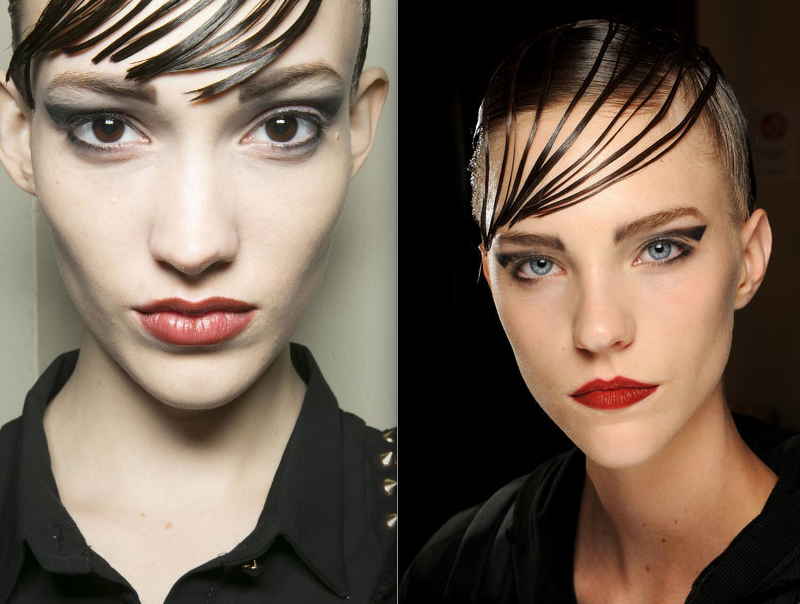 The look was somewhat masculine at Chanel with hair was pulled tightly from the face and fashioned into a pompadour and sleek ponytail. Eyebrows were strong with little arch, and cheekbones were emphasised with rosy pink blush. Makeup artist, Peter Philips, kept the eyes subdued with no mascara and finished the look with a splash of soft pink lipstick. 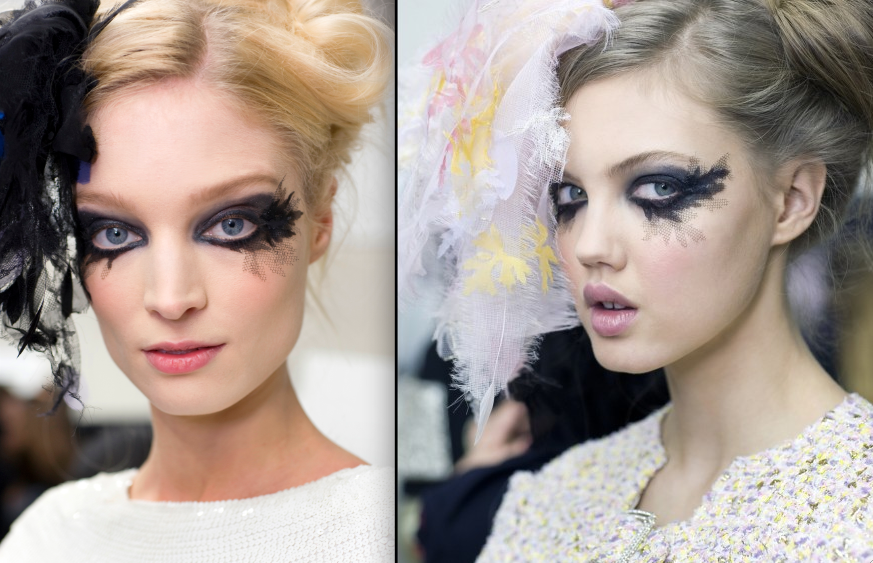 It was all about working the pout on the Dior runway this year. Artist Pat McGrath, created a metallic, reflective lip using bronze, lilac and dark rose shades that looked truly magical glistening under the bright lights. The lips had a wet finish and were mesmerising to see! The rest of the makeup was kept fairly simple with bold brows, gold flecks in the inner rim of eyes and light eyeshadow. The hair was tightly slicked back into a bun and wet with glitter to maintain the shimmery glamour. 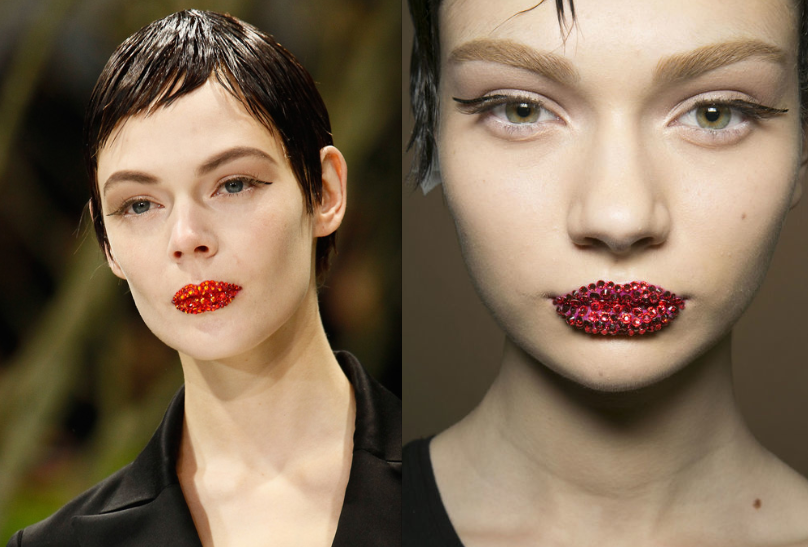 The beauty at Elie Saab was graceful and incredibly wearable. The hair was pulled back into an elegant chignon with the fringe swept across the forehead to the side. The makeup injected some modernity to the look with black and metallic shading the eyes. Thick black mascara was piled onto lashes as well as a flick of black eyeliner to make the eyes stand out. The rest of the makeup was kept simple and finished with a subtle rosy pink lip. 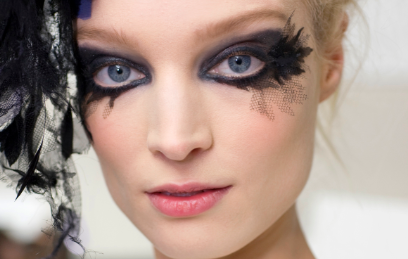 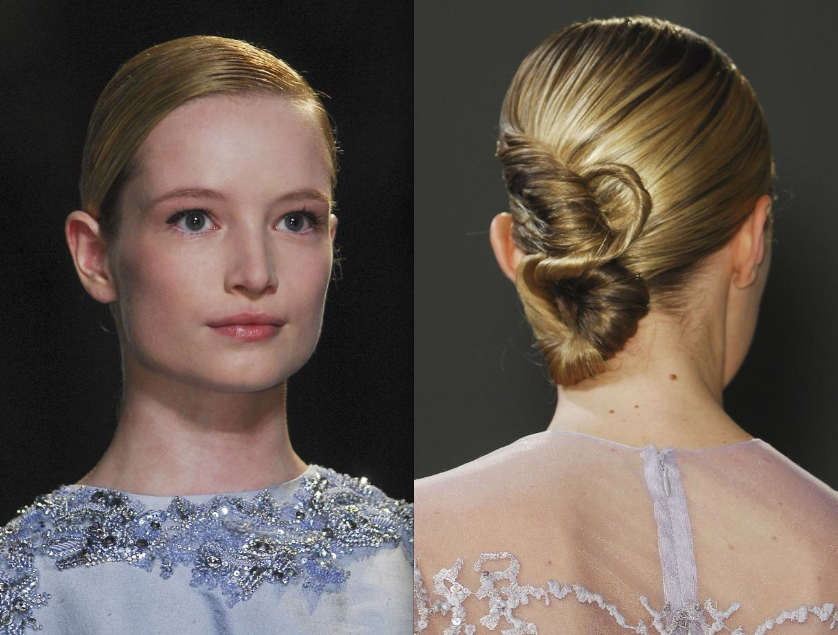