So I have a secret to share. It’s not one that I want to, but I think for the good of Melbourne foodies, I need to. It’s called the Highline restaurant.

Located on the deck level of the newly renovated Railway Hotel in Windsor it’s definitely one of the newer places that requires raving about. The Railway Hotel in Windsor has transformed itself from the pub of yesteryear to a modern multi-level dining and drinking venue. The facelift sees the opening of the formal dining space where Highline resides, but also adjoining it is the new Deck bar, one of the largest deck bars on Chapel street, both with beautiful city views. 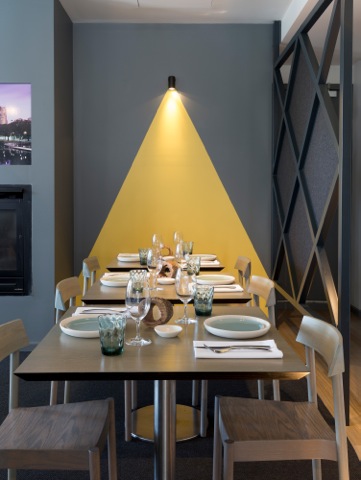 The restaurant seats only 30 people and focuses on unique Australian produce in beautifully designed and created dishes by Young Chef of the Year Finalist in 2014, chef Simon Tarlington. Most recently working at Quay in Sydney under the tutelage of award winning owner Peter Gilmour, Simon takes what he’s learnt from his experience there and other restaurants he’s worked in and translated that to a whole new level of dining at Highline. His modern and innovative menu focus on fresh flavours, seasonal produce and sustainable practices and delivers dishes that are beyond what you’d expect for a restaurant in a modern gastro pub.

He has definitely given foodies something to talk about in Melbourne. The menu is interesting and innovative in its use of different ingredients and combining them to deliver sophisticated fine dining dishes. The Highline restaurant gives some of Melbourne’s best restaurants a run for their money I’d say. 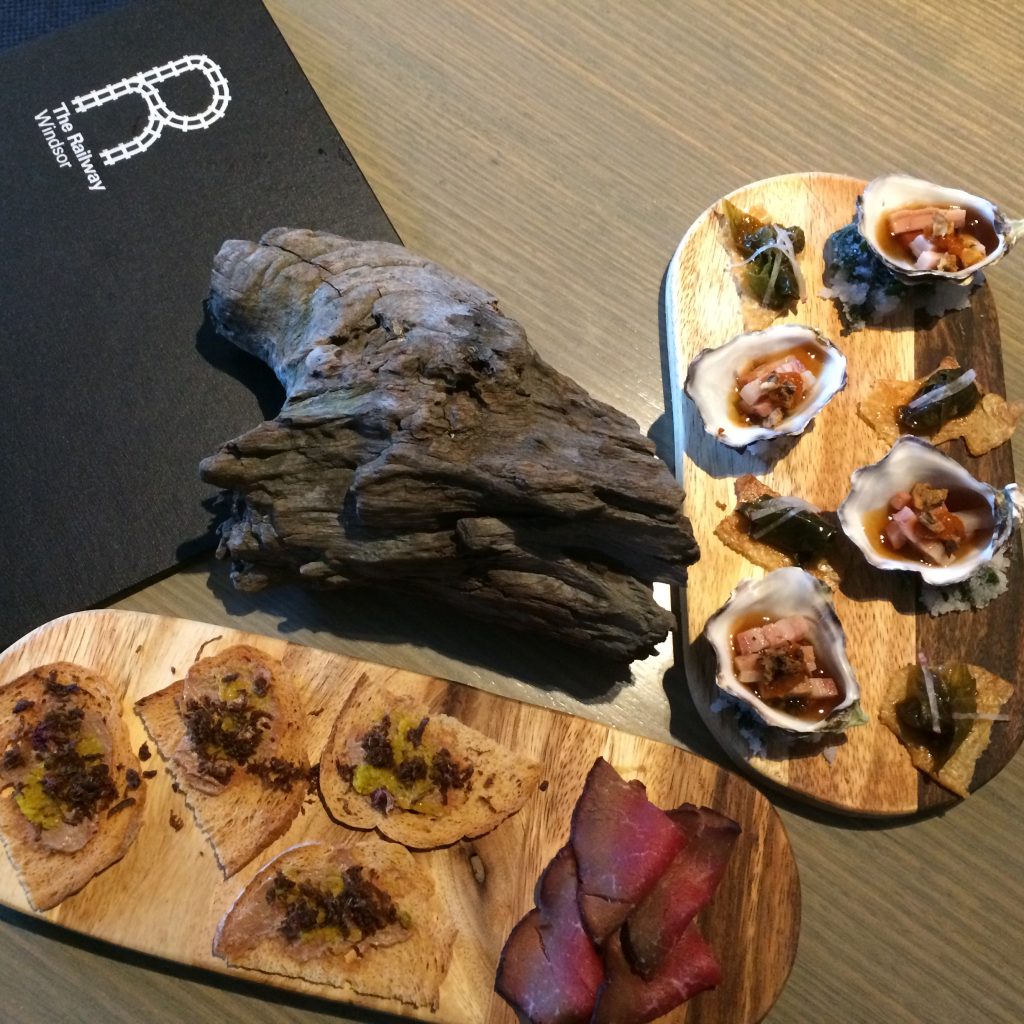 We were lucky to take part in a special tasting menu which saw us starting with a variety of small tasting dishes to whet our appetite. Chicken skin with relish – where the chicken skin had been dried out and fried to create a crisp like base for the relish; Oyster with bacon; Chicken liver on toasts and House-made bresaola. These small morsels of delicious delights really marked the start of a beautiful meal. 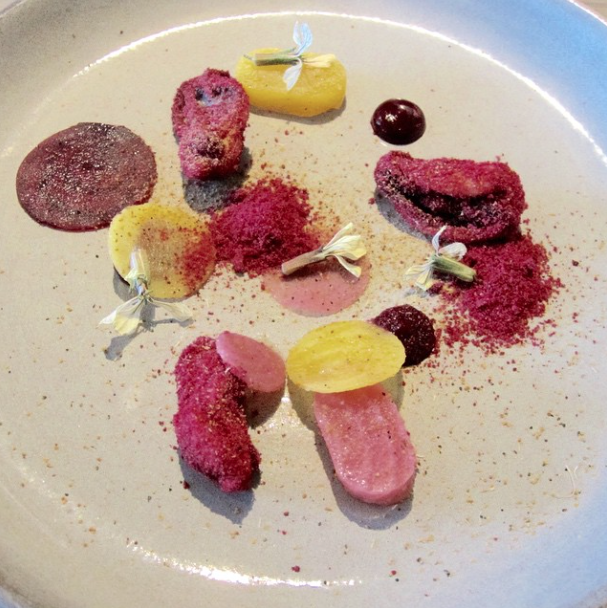 This was followed by the Smoked mussels with variations of beetroot – powdered, purée and slice. The beauty of this dish was not only in taste but also the colours on the dish. The brightness of the beetroot was spread across the plate in different forms. The powdered beetroot and gel and slices all creates different textures which were delightful to eat. 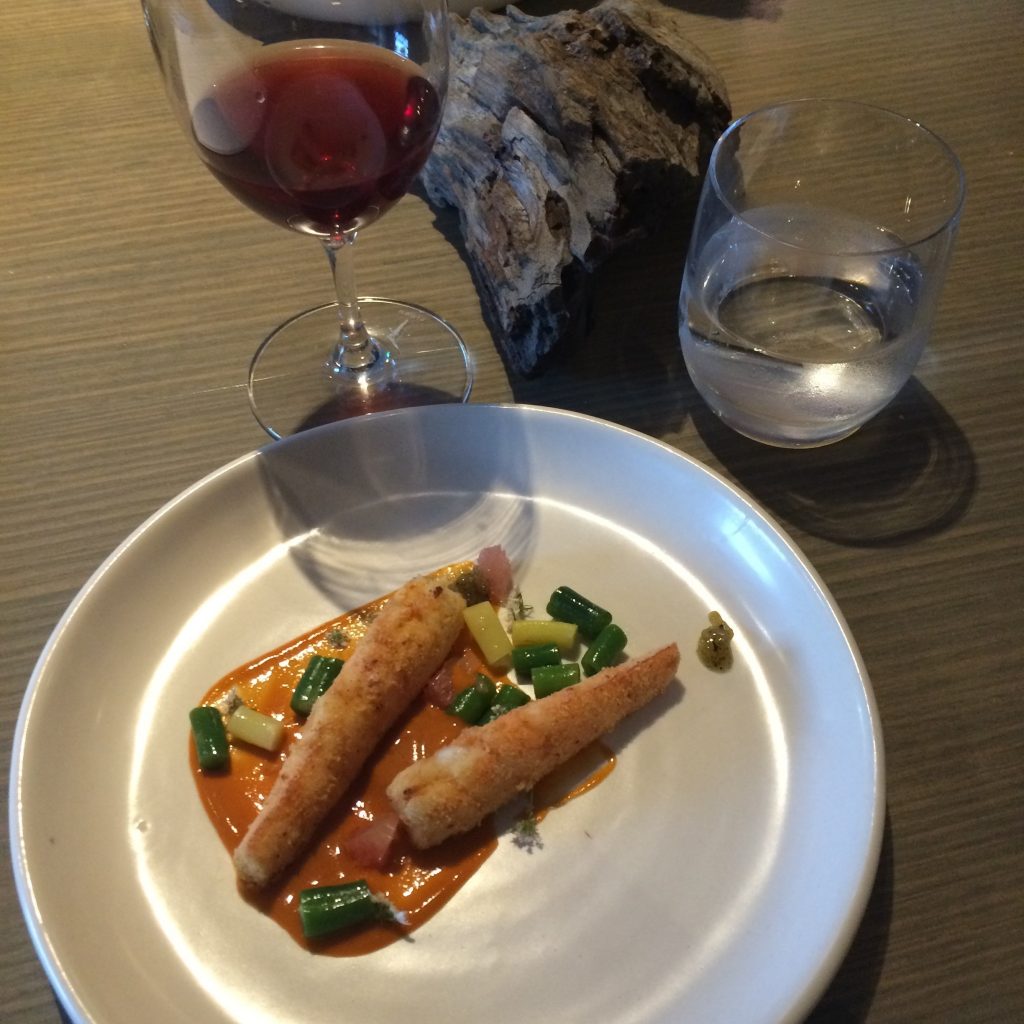 The next dish featured a meat I hadn’t had before. Wallaby. Not something I would have have thought to automatically order but it was soft, delicate and the taste was very subtle. If you want to try something a bit different then I’d have to say you should give this a go. 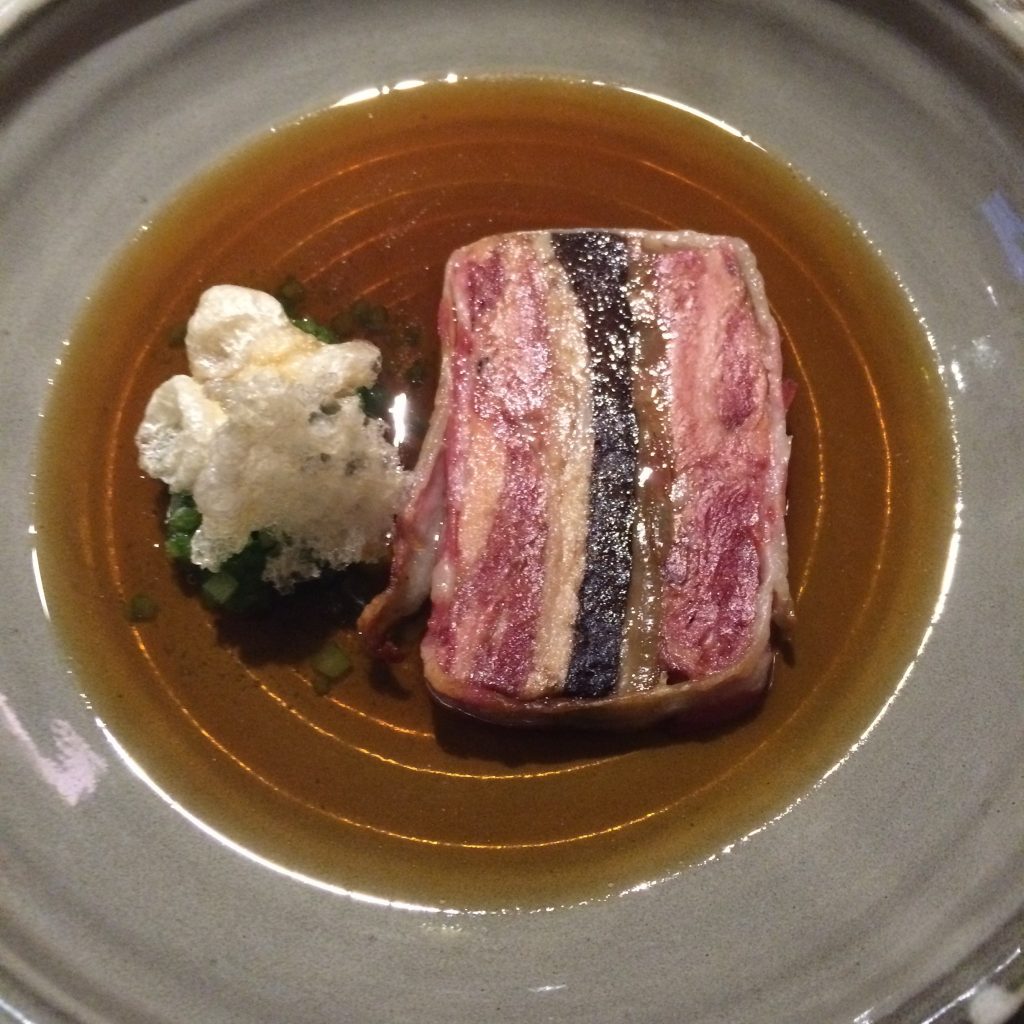 The Pig nose to tail with a smoked bacon broth and preserved celery was one of my favourites of the evening. Pig parts from nose to tail were layered like a terrine including a layer of black pudding. One would have thought that the bacon broth would be too much pork for one dish but the smokiness of the broth from the bacon really added to the taste of the dish.

Our last savoury dish was a beautiful beef fillet with a sliver of beef tongue and root vegetables. A truly inspiring mix of different textures, from the soft texture of the fillet to the crispness of the root vegetable dishes matched with the softness of the beef tongue. Delightful. 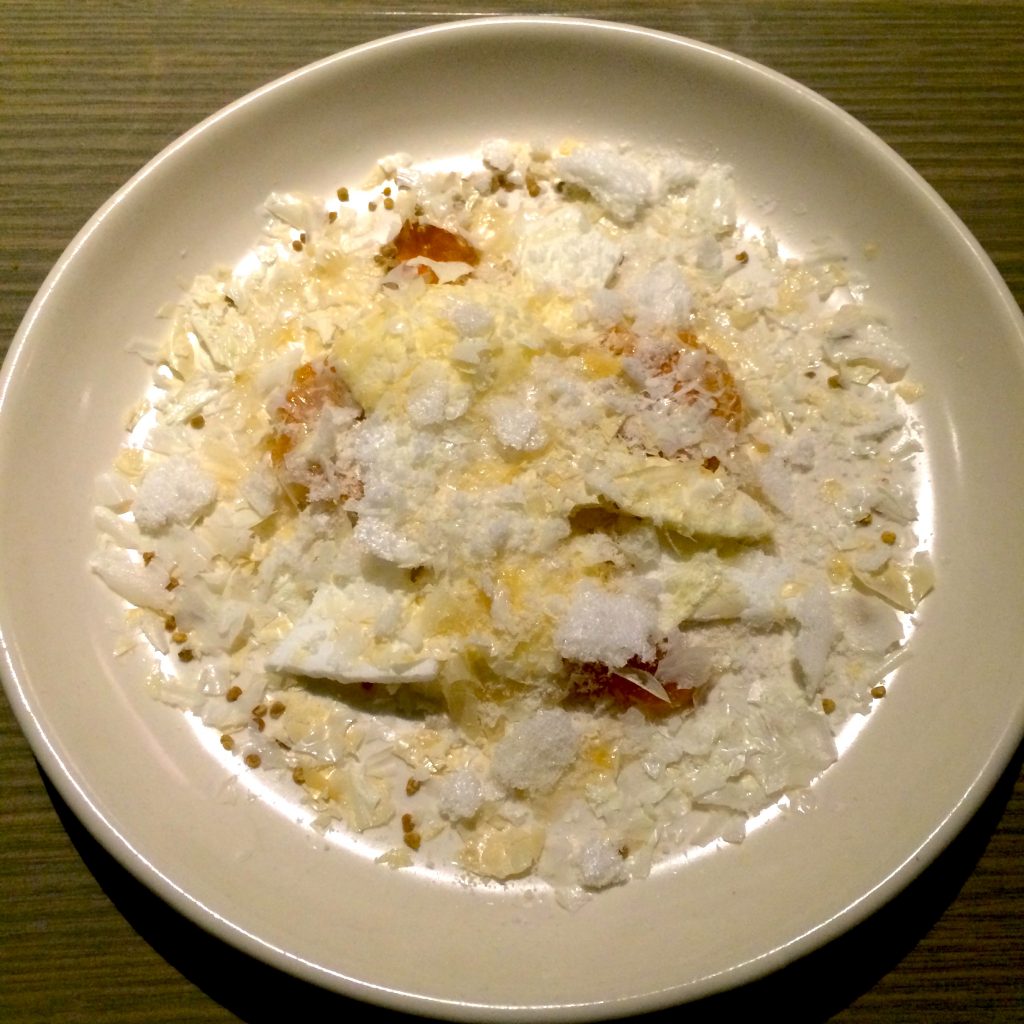 We shared two desserts, the first called Milk and Honey – a visually beautiful dish with dashes of yellow amongst a sea of white. Honey transformed into jelly and dotted in and amongst crisp meringue and spongelike cake. The second called Choc-berry obsession – beautiful creamy chocolate mousse with chocolate soil, berries and shards of chocolate. Absolute heaven. 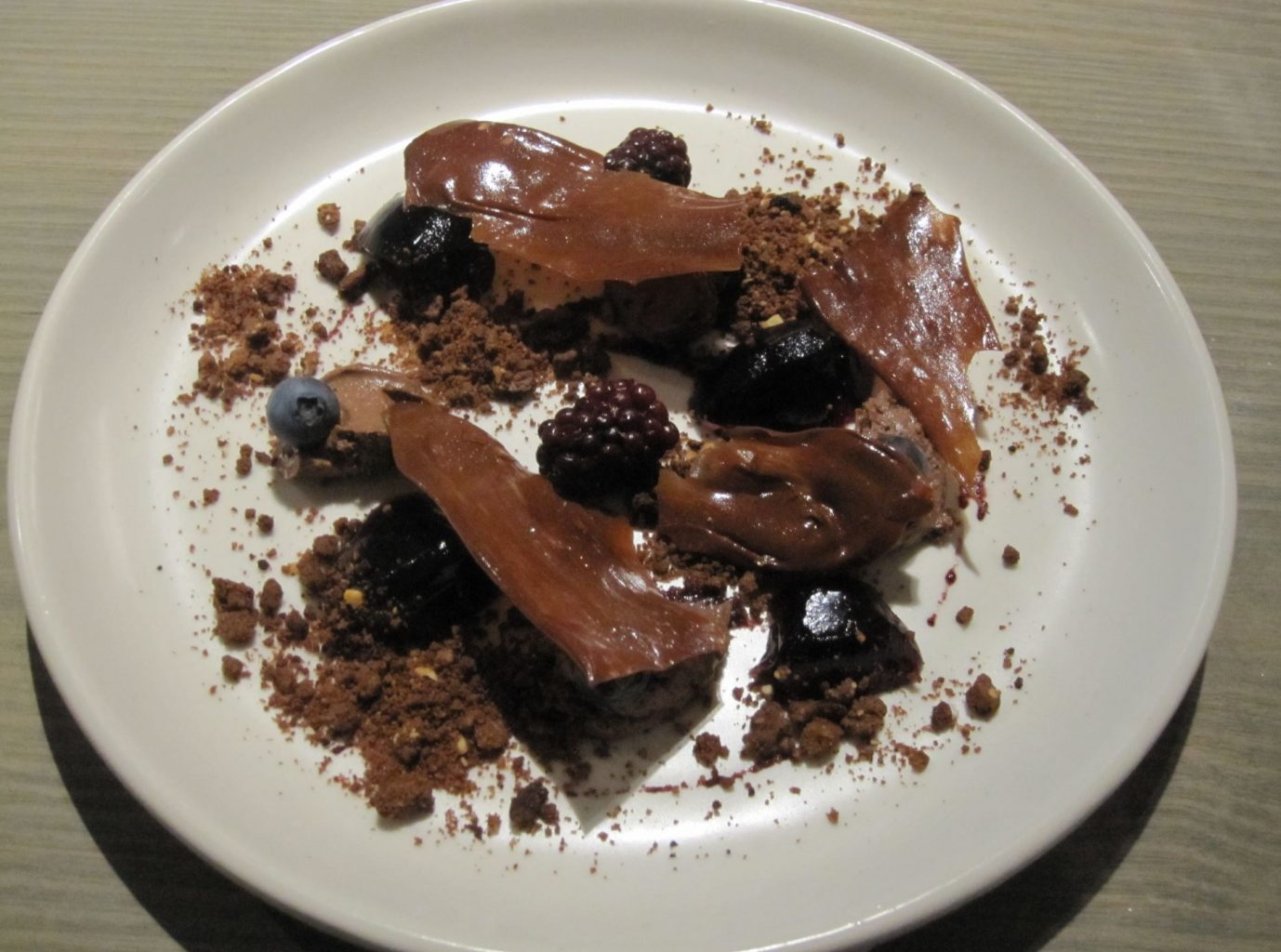 The wonderful thing about the ingredients used in the dishes at Highline is that they are generally all locally sourced. Simon Tarlington came to speak to us after our meal to talk about the inspiration behind the menu and his approach at Highline. His farm-gate to plate mantra was assisted by the ability to source key ingredients from the Railway Hotel’s own farm, Oak Valley, located near Strathbogie in north east Victoria. The farm rears cattle, sheep and pigs, as well as grows vegetables and keeps a bee hive where honey is produced.

Simon explained that for every pure bred Angus, Bircher Pig or Lamb that makes its way to The Railway Hotel, the produce is wholly used by the kitchen – either in the menu for the Public/Deck Bar or Highline. He explained that prime cut beef is dry aged for up to 30 days whilst brisket is used to make pastrami and another part is used to make bresoala. Small goods and bacon are produced from the Bircher pigs that are sourced from the farm. Even the bread  contains special flour that is sourced by Simon that is given to Brioche by Philip to make special loaves for the restaurant. Everything menu related is so well considered and really pays homage to the farm gate to plate mantra that Simon Tarlington aspires to maintain.

It’s the additional considerations that make the whole dining experience at the Highline restaurant just a bit more special than eating elsewhere and why it takes fine dining to another new level. It’s creative and innovative dishes with a focus on fresh seasonal produce that is locally sourced is something that makes dining here more than just dinner. It’s an experience.

The Highline Restaurant at The Railway Hotel, 29 Chapel St Windsor