Hair by Redken was “ridiculously simple and achievable”, said hair director Philip Barwick. Barwick’s tip is to get “the products to work harder” with “lots of twisting and scrunching [and] very little brush work”… “It has a quintessential Australian feel to it”. 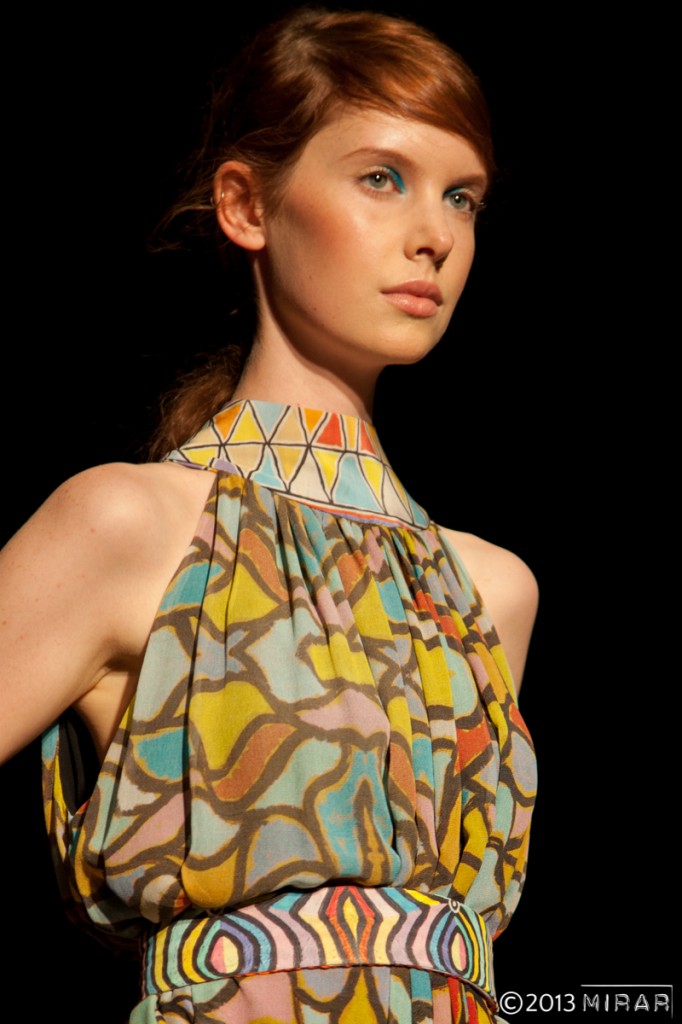 1) Prep hair with Rootful 06 Root Lifting Spray ($29.95). Apply to roots, and work it in with a soft bristle brush. Blow-dry on low heat, scrunching with fingers.

2) Part hair low on one side, draping it across the face to fall over the corner of one eye.

4) Gently backcomb just below the crown to build body. Pull hair into a low pony at the nape of the neck. 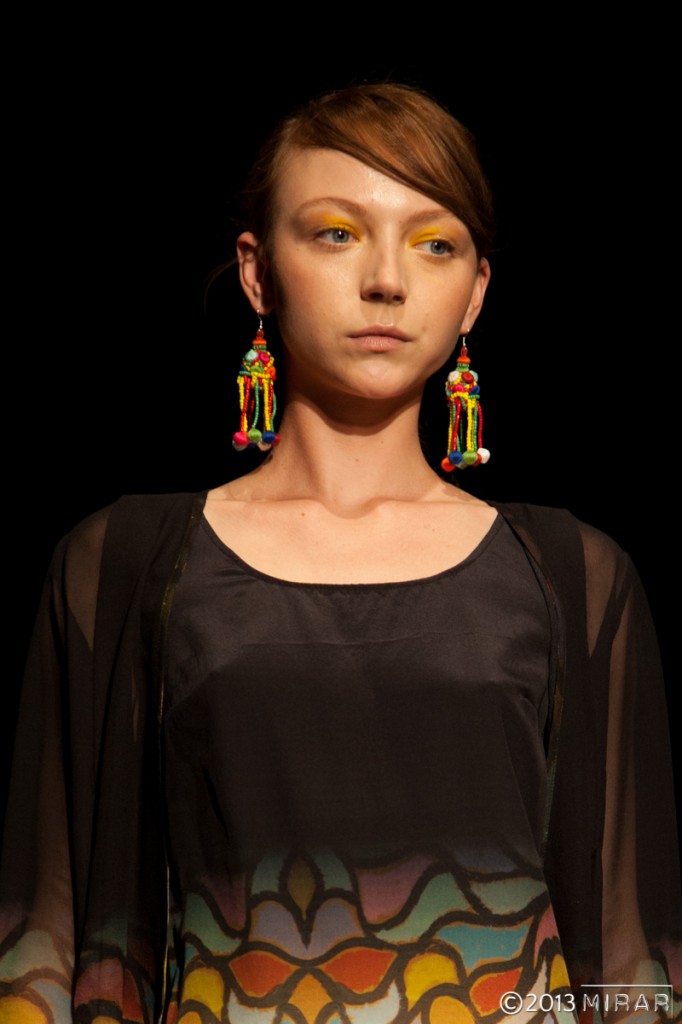 The makeup by Bobbi Brown was inspired by Roopa’s designs, “injecting colour in certain areas of the eye, and just making it pop”, said director Alphie Sadsad. Long-Wear Cream Eye Shadow in Blue Moon was applied for that ‘pop’ of colour, as was Bobbi Brown’s Creamy Matte Lipstick in the coral shade, Jenna. Skin was left natural and healthy with Bobbi Brown Skin Foundation as a base, and Bobbi Brown Uber Beige Pot Rouge for a rosy glow.

Two different nail colours were used on the hands and feet, with nails directed by Karon McKendrick-Taylor for O.P.I. Both shades were matte – a hot new trend for the season – with orange OPI In My Back Pocket, and OPI No Room For the Blues to complement the bright eye.

Hair by ghd at Alex Perry was inspired by the everyday girl. The style had “a nonchalance… it could have been that the girls had done it themselves”, said director Sophie Roberts. Hair was prepped by ghd Total Volume Foam and blow-dried for direction and texture. The ghd Eclipse was used to iron the hair straight, then the hair was secured on the crown of the head in a casual knot with a silicone elastic. ghd Final Shine Serum finished the look, giving hydration and shine. 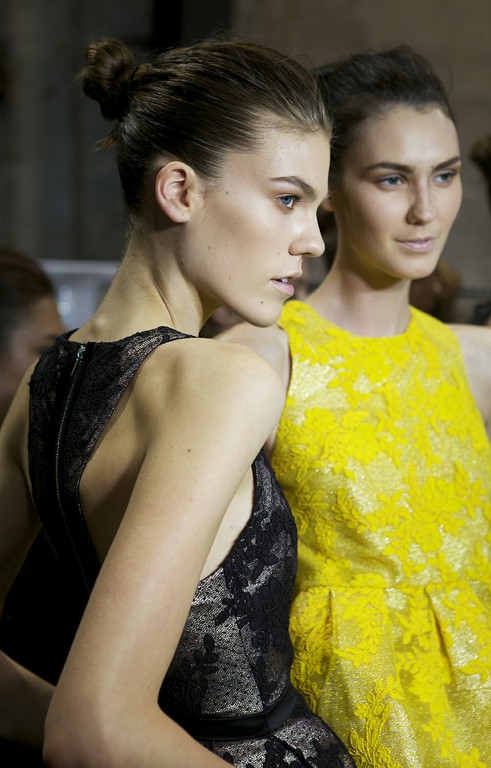 The relaxed everyday beauty look carried over to makeup, directed by Napoleon Perdis (for Napoleon Perdis). Perdis created a nude face that focused on luminous skin and “eyes with highlights but contrasting it with matte colours” for a “completely modern and fresh look”.

Redken Hair Director Richard Kavanagh created a sophisticated and streamlined look at By Johnny, with models sporting sleek straight hair with a clean centre part and blunt ends. Kavanagh wanted to create a look that was “modern, strong and timeless… to exude quality and shine, and yet still move and float naturally as the girls walked down the runway”. 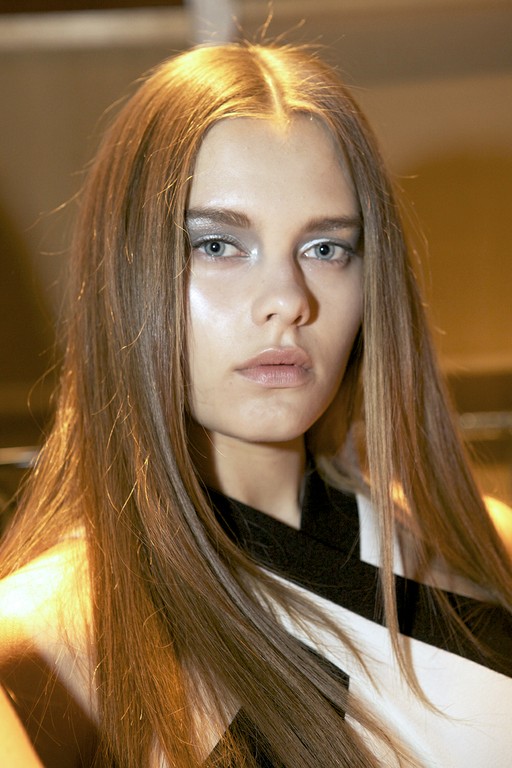 3) Part hair clean down the centre. Straighten hair with a flat iron until dead straight.

4) Apply Fashion Work 12 Versatile Working Spray ($26.95) to tame any flyaways and to maintain shine and hold.

Nicole Thompson for MAC gave models a chromatic eye from lash to brow, paired with strong “handsome” brows. For the chrome eye, Thompson “layered over a bunch of metallic pigments… [with] clear Lipglass over the top so it’s super shiny”. 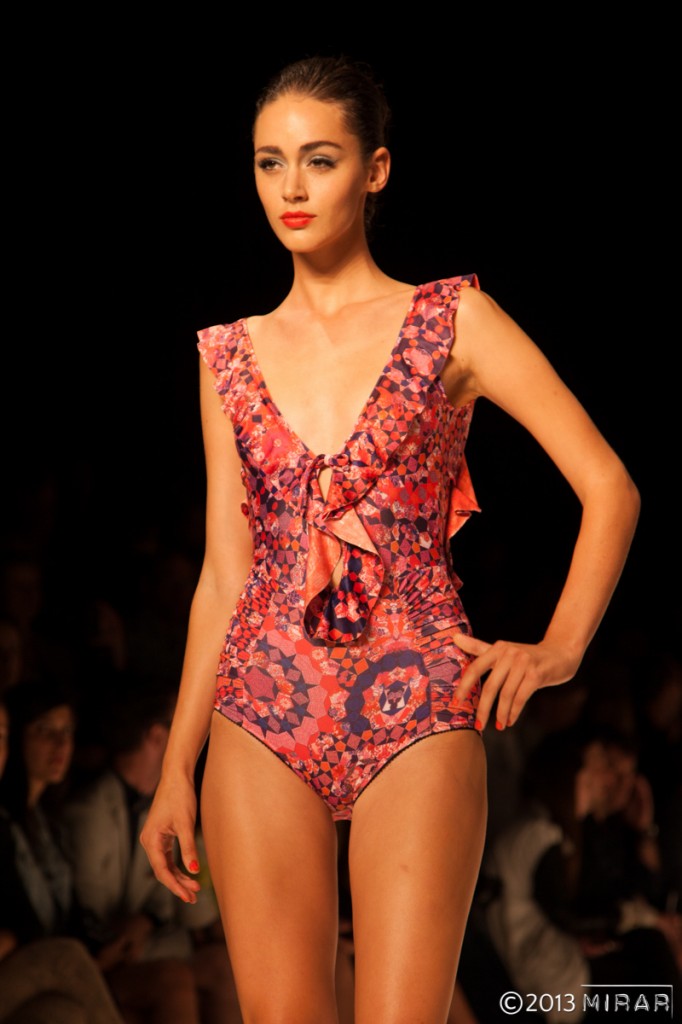 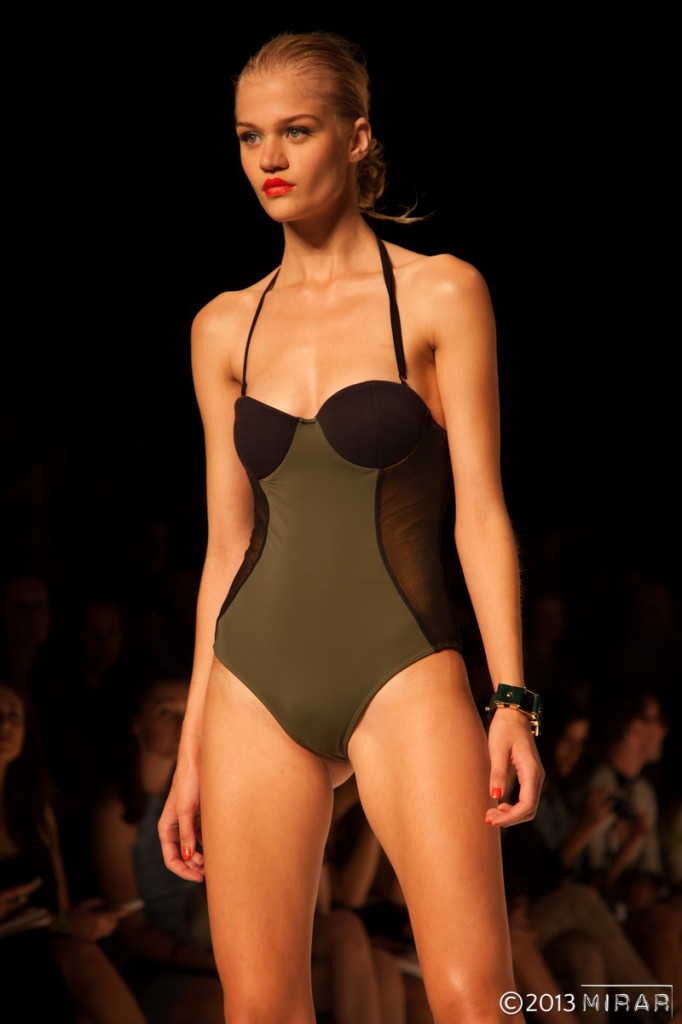 Hair by Redken was wet-look and beachy, bundled into a messy bun at the base of the head.

Models at Romance Was Born sported wigs, with four different looks combining the themes of “candyland, psychedelia, ’60s, ’70s”, says director Alan White for ghd. The wigs were coloured in the same colour tones as in the collection, taking everyone “on a ‘shroom trip… [with] ghd and Romance combined”. ghd Total Volume Foam was applied for body, then styled with the ghd Eclipse iron. 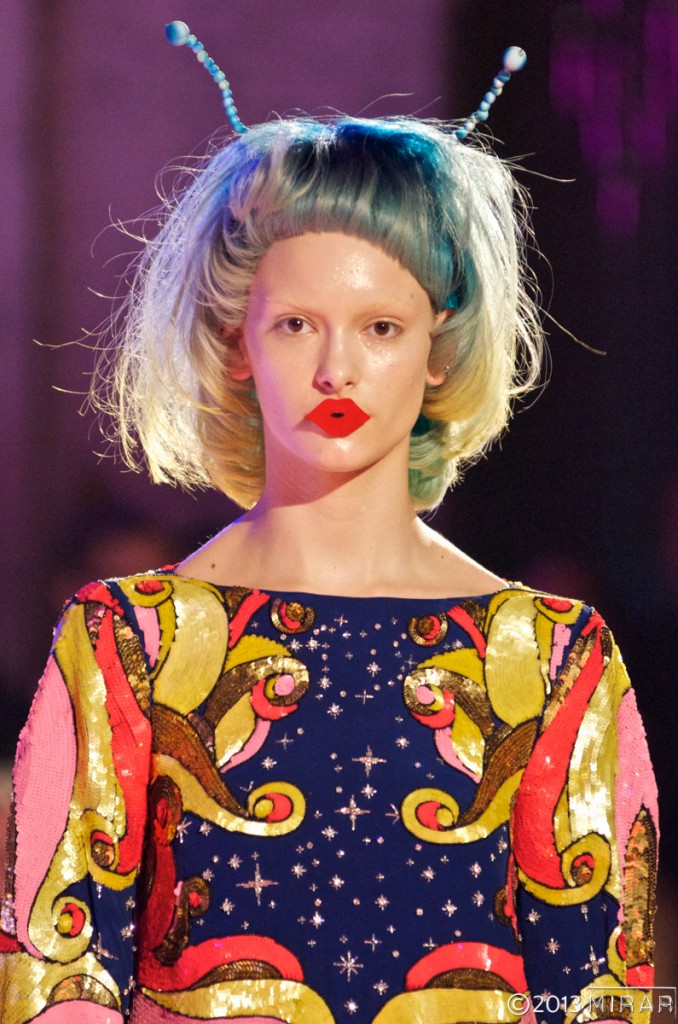 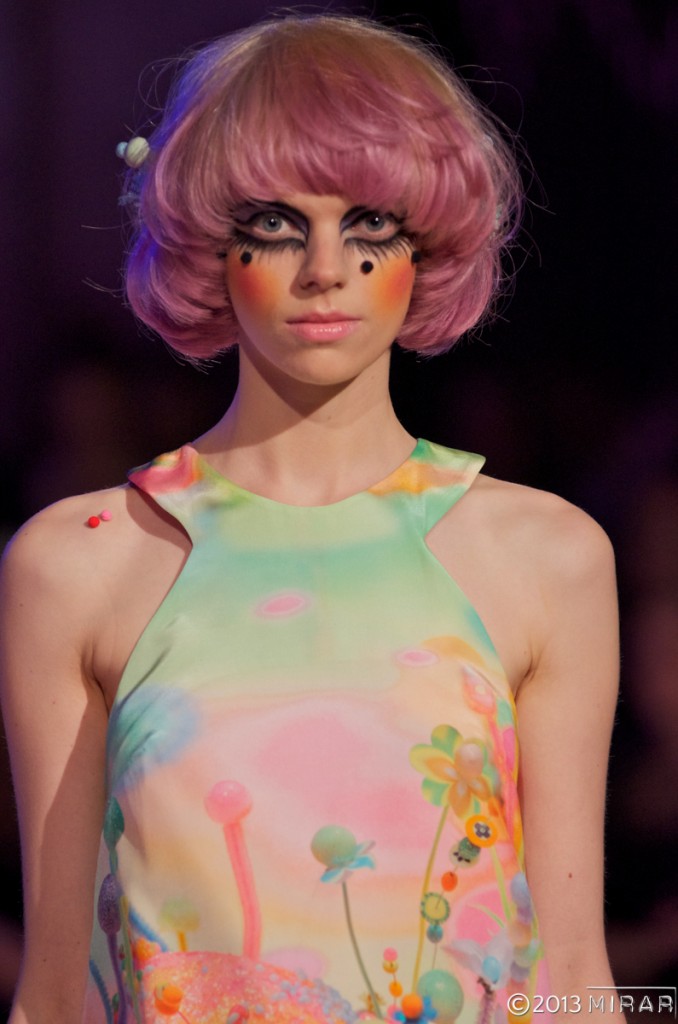 Val Zuban for MAC created three makeup looks, with each being slightly different “because we’re not all identical”. The first look was like “a doll grown up” with “a graphic eye, a bit of a cheek”. The second was “a kind of a breath of fresh air, with an irreverent lip”, and the third “a sort of nighttime magic moment”. 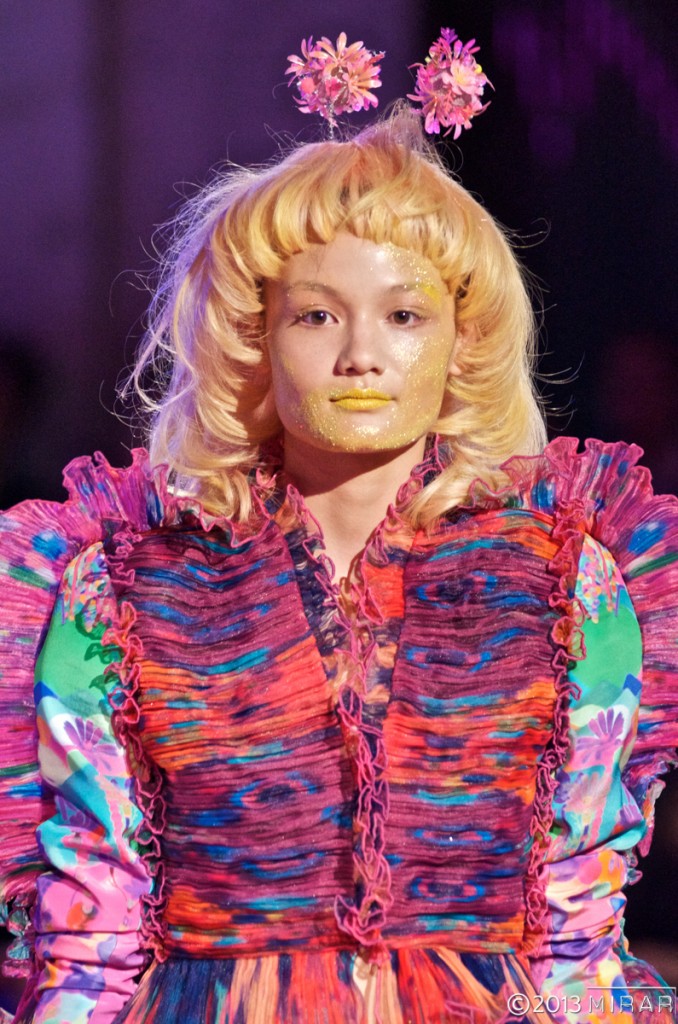 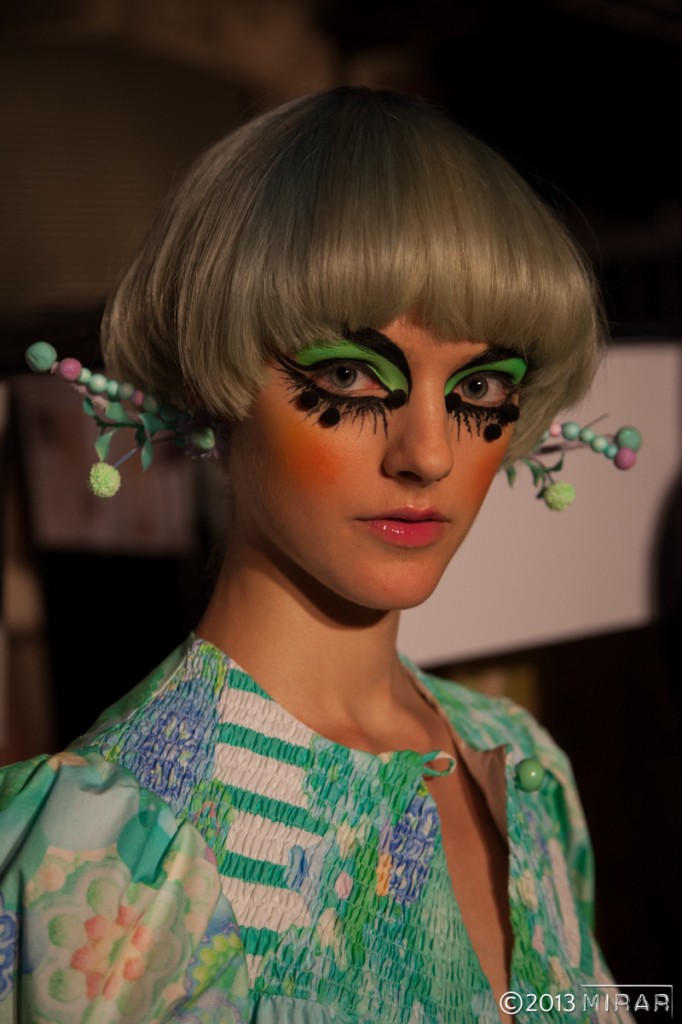 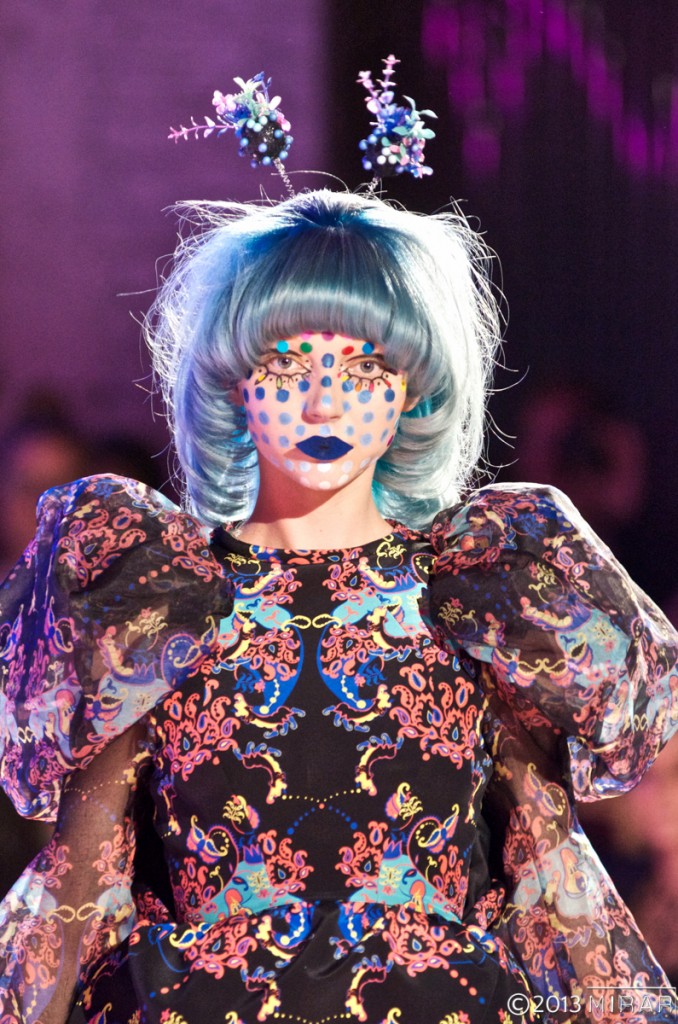 Four different designs of false nails by Rock Beauty London were featured, three of which were personally designed by Romance Was Born. Added on top of the nail wraps were 3D elements including Nail Rock 3D Frou Frou and mini pop poms, flowers, butterflies and sweets. Plain polish was painted on the toes to match each pair of shoes.