Glassons’ first Sydney runway show was held last week in a basketball stadium in Sydney’s CBD. The adventurous campaign was far from the ordinary, showing off Glassons’ AW13 collection; the RUSSH Edit, in a daring yet incredibly successful manner. Already labelled as one of the most exciting and imaginative Australian fashion shows of the year, attendees were bewildered by the electrifying and fun atmosphere, captivating everybody in the stadium. 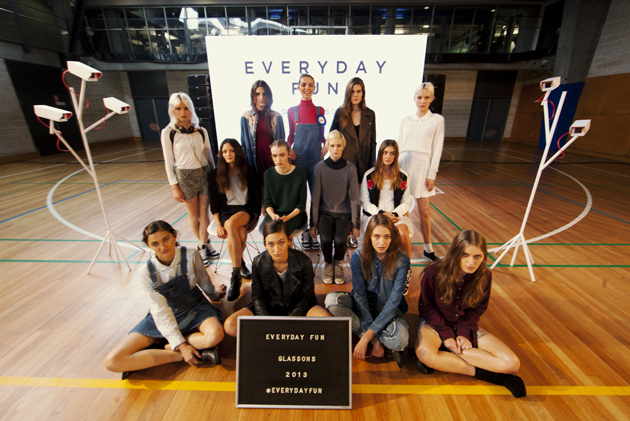 Guests were seated in breachers from where they viewed the Everyday Fun campaign film directed by Michael Humphrey and styled by Zara Mirkin. Full of style and attitude, the audience were intrigued by models ‘Chloe’ and ‘Dillion’ competing against one another in a child-like series of games, dressed head to toe in Glassons’ latest collection.

Laid-back denims and dark silhouettes are strongly featured, with a hint of metallic and bold prints. Topped off with stylish accessories that compliment the garments perfectly, helping them to achieve a range of styles, from preppy to cool chic.

To follow on from such an adventurous introduction, the typical catwalk we expect to see was transformed in a widely amusing game of musical chairs played by the Glassons’ AW13 models, keeping up with the ‘Everyday Fun’ theme.

Along with their invite, guests were given personal locker keys, each locker in the stadium containing a goodie bag including limited edition tees and specialty printed caps for the event, adding the final touch to the spectacular show.