Festival. Noun: An occasion for feasting or celebration, especially a day or time of religious significance that recurs at regular intervals.

I’ve never been a religious person; however, I have always respected the cultural significance of a religious celebration. Whether it’s Easter, when the egg is an important symbol to welcome new life; or the Lunar Festival, where the moon cake is a delicacy that is gifted to family and friends for longevity and good fortune. The giving and receiving of food is the corner stone of any festival. Food transcends all boundaries. It is the common language that brings people from all walks of life together. We are social beings and  food tells a story of where we are from. The festival is just another way to tell that story. 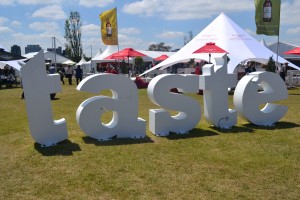 The Taste Festival Melbourne is an annual event put on for Foodies by Foodies. As the name suggests, it is a festival where you can taste, try and sample your way through the hundreds of artisan producers on show. This year, it appears that coconut water was making a bit of a splash. Premium coconut water is like a CrossFit gym, your cool factor is exponentially increased if consumed. However, what really excited me was the unquenchable fad of craft beer and cider (and even alcoholic ginger beer). To make matters worse, they even had free beer tasting sessions. Recouping the entrance fee? Check. 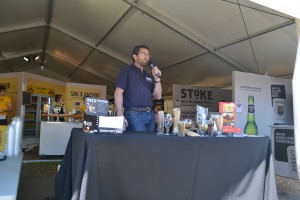 The main attraction to Taste is, of course, the restaurants. Movida; Mamasita; Chin Chin; the Huxta twins (Huxtable and Huxtaburger) and Burch and Purchase were just a few names to cook up their version of ‘festival food’. I noticed this year each restaurant had an ‘icon dish’ on their menu. These were top-tier dishes using premium ingredients. For example you can get a wagyu and fioe gras burger at Huxtaburger, aptly named – Douche Burger. Anyway, I like to think of Taste as a multi-restaurant degustation. I believe this  gave you the feeling that you were dining at the world’s greatest restaurant. I mean where else could you go to get Mexican and Vietnamese at the same place? Just make sure you have enough for dessert. Or you could’ve always topped up with more money – #YOLO. 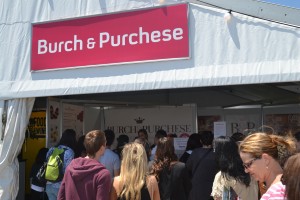 In recent years the event has  moved outdoors to the Albert Park lake precinct. Although, gambling with Melbourne’s weather may seem like betting at the casinos, when the weather gods are kind, the event is absolutely gorgeous.

From the streets – The Spanish Festival

Although it would be nice to be at two places at once, I am only human. Fortuitously I had a friend who was at the Spanish Festival and  kindly passed on their views. Let’s give our friend a pseudonym and as it happens, the initials of our friend’s name spells out B.E.N. 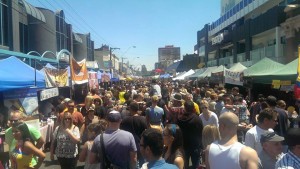 What an atmosphere! There is no way to describe it other than a fiesta. 300 metres of food, music and thousands of people. It really shows something when a community gets together to celebrate culture like this and gets everyone involved.

The stage down the Nicholson Street end was in full swing all day and night, with the acts ranging from traditional tribal dances in full “uniform”, live bands playing Latin hits, through to the slightly more risqué (though definitely more crowd involving) salsa and flamenco. There truly was something for everyone. This was only the beginning however, with shop fronts opening up were holding their own in the entertainment department. Singing, dancing, crowd participation. The aptly named Spanish Club was doing a roaring trade from midday to well through the night catering to the older audiences.

The food was incredible. Traditional and contemporary Latin favourites, Mexican (Tex-mex and real), popcorn, and of course Paella of every variety and style. Spoilt for choice would be an understatement. Like the entertainment it didn’t stop there. Everyone was invited and so Texan BBQ, souvlaki, ice cream and countless others were all there to join the party. The kids were having a ball and while the parents were getting dragged around everywhere as well, they didn’t seem to mind.

Considering the number of people crammed into the space, it had a friendly atmosphere. Everybody was definitely there for a good time and very inclusive. The crowd naturally got older as the day wore on, and with an alcohol free street, the bars and restaurants were the main attraction in the evening. That being said, it was excellently managed with no major incidents the time I was there.

All in all, I can’t wait for next year.

You know something is right, when the only place you can get an order without lining up in a queue is at the Rekordelig Cider Bar. In its inaugural year, The Night Noodle Market (NNM), running as part of The Age’s Good Food Month is an unequivocal success. 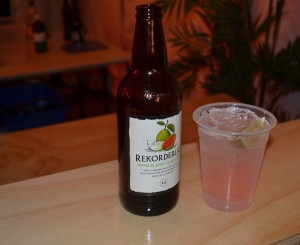 In an attempt to recreate the feel of an Asian-style hawker market, it has instead done something even better – it has catered for everyone. It is a good old fashion cook-up at a wonderful location in Alexandra Gardens alongside the Yarra. The NNM showcases the best from China Town and has integrated other Melbourne favorites such as Italian Gelato (Messina) and the aforementioned ‘Beautifully Swedish Cider’. There were also ‘Asian mini-pancakes’ that suspiciously looked and tasted like Poffertjes. Classic Dutch. 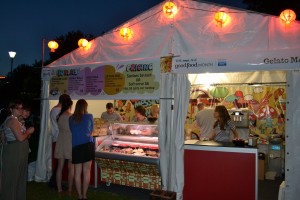 Melbourne cannot possibly do a food festival without some local fan favorites – it is sponsored by The Age after all. Chin Chin, Longrain and Izakaya Den have all come to the party. Although you still probably have to wait around 1-2 hours for food at Chin Chin, nothing new really. Speaking of queuing, I don’t think I have ever been to a festival where I would be lining up 2 hours for a Vietnamese Pork Roll (at Banh Mi Boys). Queuing is a virtue and has become a social phenomenon. It is simply amazing what people would do to get their hands on the latest, greatest, tastiest trends. Call it FOMO (Fear of Missing Out); blame social media; damn the hipsters; whatever the case, I believe it is all for the greater good. In a world where instant gratification is speeding up our lives and wrinkles, what’s the harm of waiting an extra 1-2-3 hours? Slow down, catch your breath, and make some new friends. After all, at least then you can compare notes on how long the line is. 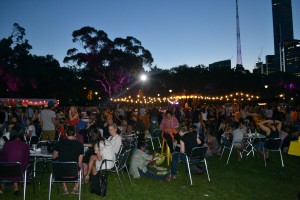 The NNM is definitely a place where you can just chill; enjoy some free music and a cider. With the Melbourne weather looking bright (as of Monday this week); expect the NNM to be buzzing throughout the duration of the event.