She’s not your average makeup brand spokeswoman, but then Ruby Rose is not your average woman. The Australian born creative made a whirlwind trip to Australia earlier this month as part of her role as an ambassador for makeup giant Maybelline, of which she has been the face of for 5 years.

It is clear that Maybelline is more than just a brand to Rose. She treats them like her family. “My manager got an email from Maybelline asking whether or not I’d do a one off campaign and I freaked out,” Rose says of her first official encounter with the brand. “I couldn’t believe they wanted to do an ad with me. So we did the Falsies campaign then I thought that would probably be it just because I have the tattoos and short hair and I’m a little bit out there, but then we started doing it officially and I became a spokeswoman for the brand.”

So what does it mean to Rose that Maybelline have not only embraced who she is but really celebrated it? “It means the world to me”, she says. “Maybelline have always been fashion forward in that respect. They’ve always featured diverse nationalities. They’ve never been weird with sexuality or religion and they make sure that they encompass everything and everyone which makes sense because it is a brand that is so accessible to everyone. It also says a lot about where the industry is going. It says we have become more accepting of people who have bigger and brighter personalities.”

To show her appreciation for the brand, Rose famously got a tattoo with the Maybelline slogan across her collarbone. “They stood by me when I was going through a lot of ups and downs and a lot of brands these days wouldn’t do that”, she said of her decision to get the tattoo. 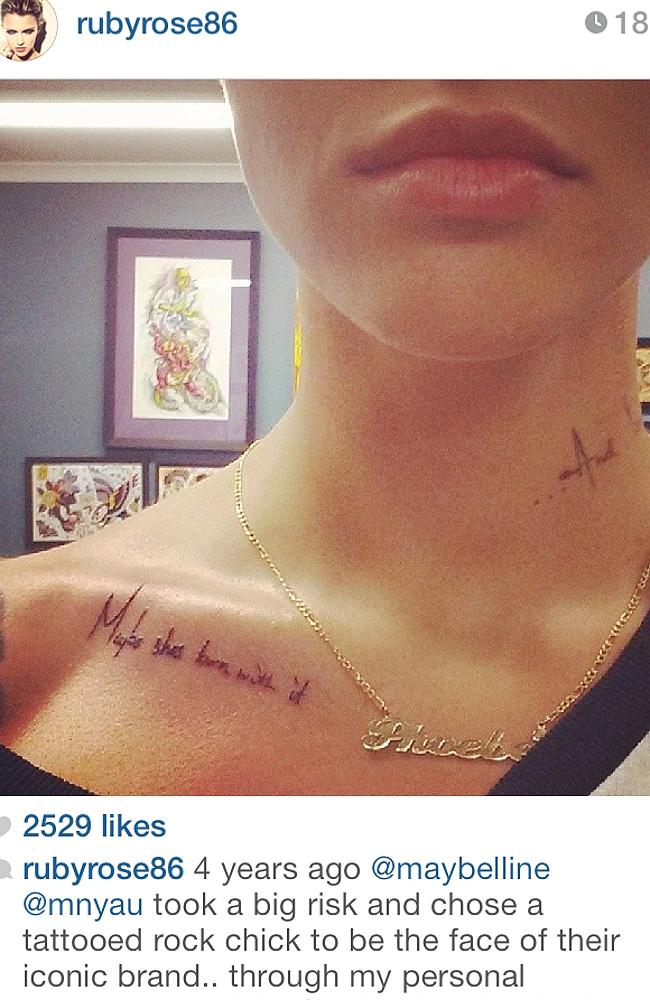 Rose was back in her home country as part of Maybelline’s 100 year anniversary celebrations, something she is really excited about. “Maybelline are having a party for all the people who have supported them, their customers”, said Rose of the company’s plans. “There are all these awesome competitions and giveaways, which are a great way for them to connect with their customers. One of the campaigns I’m working on is a really inspirational campaign. It’s about looking within one’s self and the kind of mark you want to make on the world.”

It’s a big year for Maybelline, having also just announced model Gigi Hadid as the new face of the brand. What advice does Rose have for the new ambassador? “She’s such a breath of fresh air. When you see interviews or images of her it manages to capture this fresh faced positive attitude”, says Rose. “If she keeps staying exactly how she is and who she is she’s just going to keep going up and up.”

It’s clear that despite being in the entertainment industry from a young age, Rose has her feet firmly planted on the ground. However, this doesn’t mean she hasn’t had her fair share of struggles. Telling the world about her struggles with depression and being bipolar was a difficult time for Rose. “I was much more comfortable coming out as gay which is weird I think”, she says of her decision to share her story. “With the bipolar, I kept it a secret for a while, but then I got sick of keeping it a secret because I figured that with the level of reach I have with social media, I felt I had a duty to be honest about it. Knowing that I have fans that probably suffer from one type of mental illness because it is so common, I wanted them to know they weren’t alone. I was told by numerous people not to say anything and that brands would stop working with me and it was really scary, but I came out and did it and none of that happened. I got amazing support from the public. In fact it really opened doors. The only things that’s really working in the world today is authenticity. There’s a lot of plastic stuff everywhere and authenticity really cuts through that.” 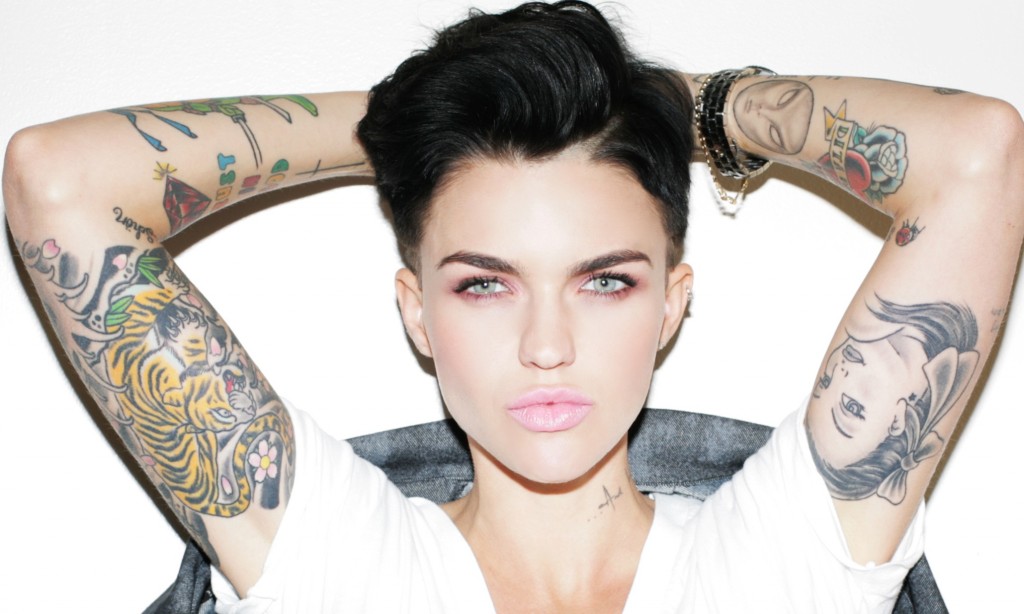 The entertainment industry is a tough game. Even when you’ve been in it as long as Rose has, there are still challenges you have to face. “It’s very easy to feel like you don’t fit in”, she says. “Like you are different to other people. It is tough being scrutinised. Everything you do is in the public eye, so when I did decide to take time off to take care of my bipolar I knew all eyes were on me and that’s a lot more pressure than if you could just secretly do that on the side.” Rose also recognises that there’s also a lot of pressure to stay relevant and current. “One of the biggest interviews I did when I was starting out was with Rove McMannus”, she recalls. “I was so proud to be on Rove and then he called me an It-Girl and my stomach dropped because if you’re an It-girl, at some point, you are no longer an It-Girl. It’s like the name of death. So i thought I better ride this out because it’s not going to last very long.” Rose advises that if you are not relevant or you feel like something’s not working then “you have to take a step back, reinvent yourself, recreate yourself, work on your skills, then come back.”

While social media gives celebrities the chance to be open about their life and really connect with their fans, there is a downside to sharing. “Trolls and the negative opinions are challenging.  Everyone has an opinion about everything, so you need to learn how to deal with them and learn to not let them get to you. Once you can realise that keyboard warriors have no impact on your success and what you are doing in your life then you’ve taken out the biggest aspect to it.”

Rose is currently one busy lady. She just recently revealed that she landed a role on the critically acclaimed TV series Orange Is The New Black, and while we tried to pry her for the inside word on what we could expect, she was coy about what she could reveal. “My character’s name is Stella Carlin. She’s a total babe and badass”, was all she was allowed to say. It’s rumoured that Rose’s character will catch the eye of main characters Piper and Alex but we will have to wait till the middle of the year to find out exactly what we can expect.

Who dat who dat..

Rose is currently on the publicity trail for Maybelline and Orange Is The New Black. This means she is spending extended time away from fiance Phoebe Dahl. The pair were planning a 2015 wedding, but that has been put on the back burner till 2016, with Rose’s role on Orange taking up most of her time last year. How does she manage it all? “Relationships are tough work and I love that about them”, she says. “When I’m travelling you have to make sure it’s a priority. It’s hard to balance everything, managing work load, personal time, love time and then going above and beyond that with charity, travel and wanting to make a difference. It’s a lot to fit into the small lifetime we have. You have to make sure you take care of yourself. If you are healthy, if you are eating right you can accomplish a lot. Also, choose something you love. I chose a career that I loved and I came into it with so much passion, that you have this extra energy and you have this extra drive so even if I’m tired adrenaline will get me through. Even if I have to do something and I’m a bit unwell or i’m jet-lagged, you pinch yourself, because you’re like I’m doing my dream job, what more could i possibly ask for?”

What advice does Rose have for people looking to do what she does? “You’ve already done half the job if you already know what you want to do”, she says. “Use that and follow your heart and commit to doing it. We all have these grandiose ideas about what we want to do and what we want to create but unless we put them into action they are just ideas. Everyone has the ability to do what they want however they want. Things like fear, fixed limiting beliefs, thinking you aren’t good enough, will hold you back and serve you no purpose. So when they pop up and you’re on your way to achieving a goal or a dream and get a set back and if you’re like I’m not good enough, I might as well give up, you’ve just got to push through it. People who gave up won’t know if they were seconds away from achieving what they wanted to. Just keep going. Just do it.”