Luxury cruise line Cunard has launched its record 54-day season Down Under by unveiling a dramatic wardrobe makeover for its famous bell boys in collaboration with iconic Australian brand, R.M.Williams. Debuting on board Cunard’s Queen Elizabeth in Melbourne today, R.M.Williams’ fresh take on the cruise line’s classic red and black bell boy uniforms is one of a series of exciting
partnerships with Australian companies designed to celebrate a two-month season in local waters for the stylish 2081-guest ship.

Presenting the uniforms, Cunard President Simon Palethorpe also revealed the cruise line’s plans to base Queen Elizabeth in Australian waters for an unprecedented 118 days over the 2020-21 summer, with Melbourne once again set to feature as a key homeport in the ship’s program.

It will be the third consecutive summer deployment Down Under for the popular Queen Elizabeth, further building on its current 54-day season of cruises from Melbourne and Sydney and its scheduled 101-day season over the 2019-20 summer. Marking the start of Cunard’s first ever series of sailings from Melbourne today as well as the longest Australian season yet for one of its current fleet of Queens, the cruise line launched partnerships with award-winning Melbourne whisky distillery STARWARD and acclaimed performance troupe Australian Dance Theatre, in addition to R.M.Williams and legendary Australian hat maker Akubra.

The bell boys will also swap their traditional pillbox hats for custom-made brimmed Akubras, ideal for keeping off the summer sun.
“Over the past decade we’ve seen a marked increase in the number of Australians travelling with Cunard so we wanted to acknowledge the importance of this market not only with Queen Elizabeth’s record deployment Down Under this year, but also with some ground breaking partnerships,” Mr Palethorpe said.

The arrival of Queen Elizabeth in Melbourne also marks the return of a very special piece of cargo – The Seafarer, a 225-litre barrel of Australian STARWARD whisky. Aged for two years at STARWARD’s Port Melbourne distillery, the barrel was loaded onto Queen Elizabeth last February and has spent 12 months travelling 95,000 nautical miles around the globe on a unique ‘maturation journey’ to create a first-of-its-kind single malt whisky. 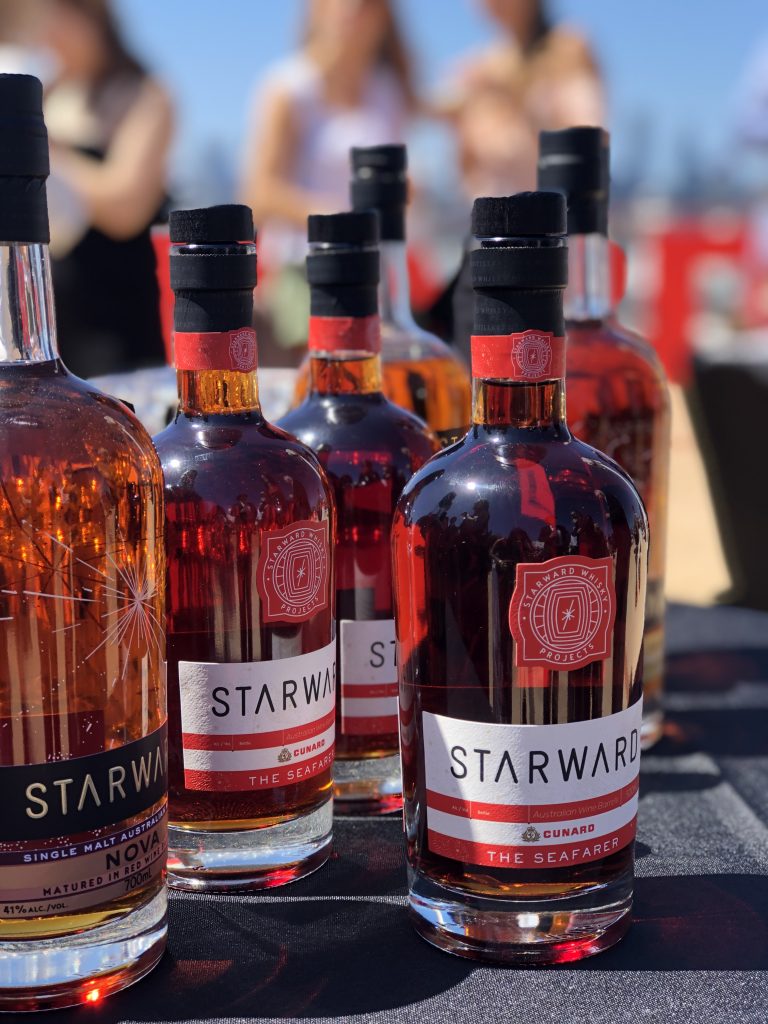 Australians can experience this rare whisky for themselves on board Queen Elizabeth during her season Down Under, and at STARWARD’s Port Melbourne distillery. “We’re thrilled to have partnered with Cunard on the epic journey that has created this very
special spirit,” STARWARD Whisky founder David Vitale said. “Weather and environment are always instrumental in developing the flavour profile of a whisky, so the conditions that The Seafarer has experienced over the past 12 months of maturation make for a truly remarkable drop.”

Cunard’s fourth partnership will come to life when performers from the Australian Dance Theatre take to the stage for the cruise line’s first special event cruise Down Under – a six- night roundtrip cruise to Tasmania departing Melbourne on March 12, 2019. During the voyage the ADT troupe will perform in their first-ever bespoke performance at sea, featuring two exclusive shows adapted from their latest work, The Beginning of Nature. Guests will be able to polish their own dance moves with movement classes led by ADT
performers and the group’s Artistic Director, Garry Stewart, as part of a special itinerary building on the ship’s new wellbeing services.

At 90,900 tonnes, Queen Elizabeth is the second largest ship ever to sail in Cunard’s fleet. Launched in 2010, she is also the youngest in the luxury cruise line’s current trio of Queens with features including more than 10 restaurants and cafés, a Games Deck featuring paddle tennis, croquet and bowls, a two-storey library, a ballroom and the three-deck Royal Court Theatre seating 800 guests and offering private boxes.

To find out more about the ship and the itineraries visit https://www.cunard.com/en-au/cruise-ships/queen-elizabeth/7