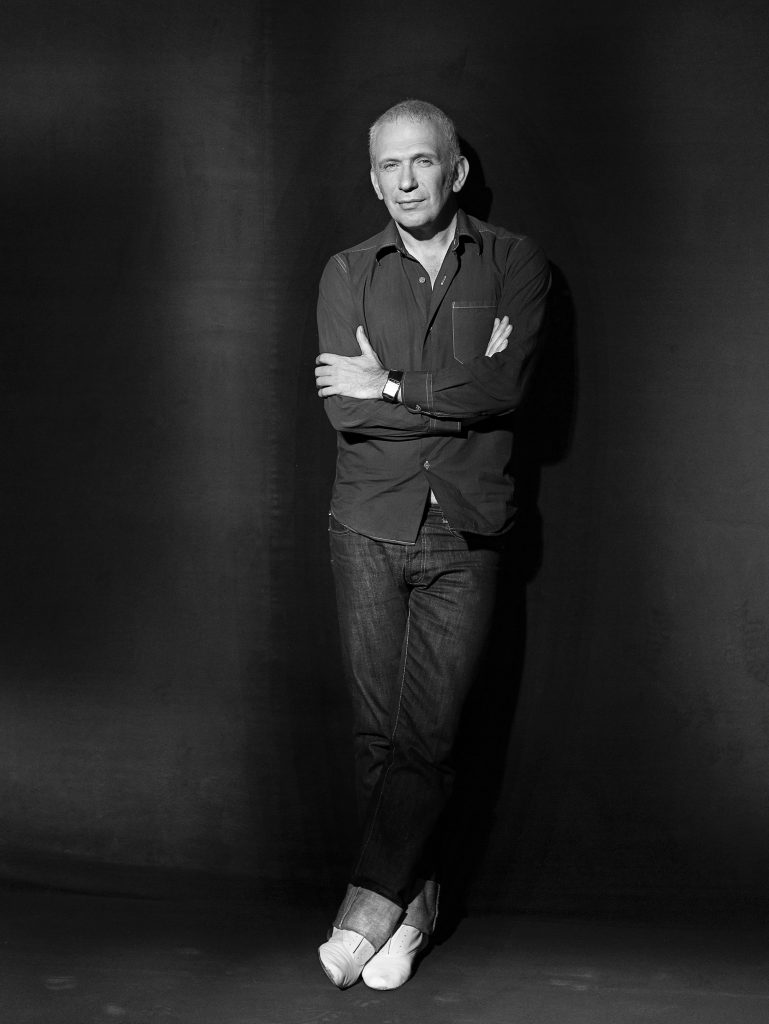 As far as couturier’s go, there are few more prolific than Jean Paul Gaultier.

The Couturing editorial team were honoured to listen to the fashion icon himself prior to the opening of the Australian leg of his “The Fashion World of Jean Paul Gaultier: From Sidewalk to Catwalk” exhibition at NGV Melbourne.

Exhibition curator Thierry-Maxime Loriot takes a moment to remind us of the “sidewalk” element of Gaultier’s work. Gaultier has been known to physically pluck models from obscurity, from the “sidewalk”, citing his constant search for unique beauty as motivation to models with interesting and “unconventionally beautiful” faces in his shows.

Flanked by two goddess-like creatures, two of his Australian muses Alexandra Agoston and Andreja Pejić, Gaultier talked us through the romantic way that he looks upon “beauty”. Gaultier iterates that beauty is everywhere and that it is his models, his muses if you will, who truly bring his garments to life. He laments that his one and only regret is the decision he made before his Fall 2004 ready-to-wear runway to use life size puppets, or marionettes, rather than models. “They were lifeless,” he sighed. “It was not the same.” 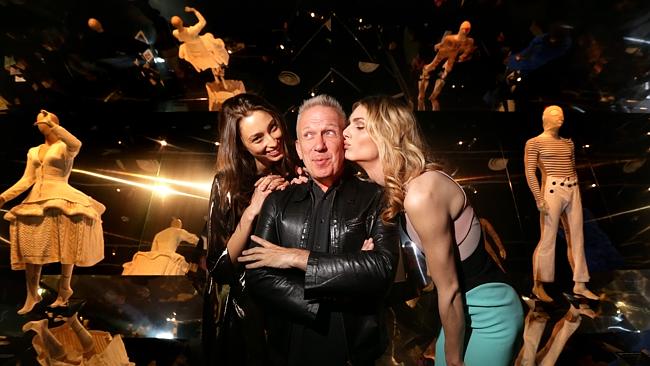 Of Alexandra Agoston, Gaultier coos “She is a contemporary beauty, very different. She could come from any country in the world!” Upon his first meeting with the Australian supermodel, Gaultier recalls being “struck not only by her statuesque beauty, but also by how well-spoken she was. I always remember seeing her during fittings and before the shows reading, writing and being very friendly to everyone – she has a great personality.”

Her first public appearance after her gender-changing surgery, Andreja Pejić takes the opportunity to thank Jean Paul Gaultier for seeing beauty in her during a time when transgender people were often viewed as lesser citizens. Andreja recounts her first Paris Fashion Week casting as an utter disaster. Having forgotten her portfolio, Andreja feared she would be turned away at the door. Gaultier saw beauty in her though, and gave her a career defining role.

“I asked Andrej to play the muse Betty Catroux. After that he did almost all my shows,” says Gaultier. “I have a lot of respect for Andrej for persevering in the fashion industry, and also because, now we can say that, she has stayed true to who she really was. It takes a lot of courage to stay authentic when you know you are different from everyone – especially now when everybody looks like a clone.”

Gaultier expresses his dislike of the model era we are currently in the midst of, a time in which he feels everyone looks the same. “People bring models to me and say ‘She in the new Kate Moss!’ Why would we need a new Kate Moss? We already have a Kate Moss! Give me something different,” he pleads.

Jean Paul Gaultier’s NGV Melbourne exhibition features more than 140 intricate and highly-detailed garments spanning his creative output, from the first dress created in 1971 and the launch of his prêt-à-porter collection in 1976 to his most recent haute couture collections. The highly contemporary exhibition, featuring 32 custom ‘talking’ mannequins, is curated by Thierry-Maxime Loriot and organised by the Montreal Museum of Fine Arts in collaboration with Maison Jean Paul Gaultier, Paris. Gaultier’s rich collaborations with renowned contemporary artists and photographers such as Andy Warhol, Peter Lindbergh, Richard Avedon, David LaChapelle, Pierre et Gilles, Herb Ritts, Cindy Sherman, Stéphane Sednaoui and Mario Testino among others, are also explored throughout the exhibtiion.

The Jean Paul exhibit will be running at Melbourne’s NGV from today until the 8th of February.
Stay tuned for Couturing’s Jean Paul Gaultier exhibition walk through and review.