Have you ever wondered how much sugar (the very bad kind) many Australians, potentially including yourselves consume per day? As it currently stands, 40 teaspoons of sugar is how much sugar is entering Australian bodies per day. Sounds outrageous doesn’t it? Well unfortunately it is true, and one of the bitter truths here is that per day, females should be consuming a maximum of 6 teaspoons and males a maximum of 8. These numbers are a huge jump down from 40 teaspoons, and many people are probably wondering a) how on earth we consume that much sugar in the first place and b) how we are going to bring the numbers down.

Thankfully, the gorgeous Damon Gameau (Underbelly, Secrets & Lies, Puberty Blues and Balibo) made this the focus of his latest project, introducing That Sugar Film. Gameau embarks on a 60 day journey to consume 40 teaspoons per day and show the world just what it does to us, physically and mentally. It is also important to know that Gameau had been ‘refined sugar-free’ for almost three years before he begun this experiment. To say the very least, the results are astounding and will leave you wondering why we ever consumed sugar in the first place!

That brings us to the first and most important point of the film; how and why we are consuming so much ‘hidden sugar’. Back in the old days (I can’t really say this, because I’m only 25) but back when products were in their most pure form, there was minimal sugar and if there was, it was ‘glucose’. Glucose is the healthIER form of sugar, it is the energy the body uses up in day to day activities and is used even more during exercise. We need glucose! This doesn’t mean we need to consume packet upon packet of Glucogel Jelly Beans (but man, are they good!). It means that we need healthy amounts of glucose found in complex carbohydrates such as brown rice, quinoa, wholegrain foods, raw nuts, and the list goes on. Then there is the ugly Step-Sister of glucose; fructose. This one is the pits and is just not good for us at all. As Gameau explains in the film, fructose is the sugar that has been added to our foods to make them taste better, and keep us wanting more. 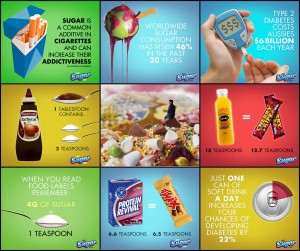 The compelling twist in Gameau’s experiment is that he didn’t actually eat any lollies or biscuits to get his sugar count up. He ate what most of us perceive to be healthy foods, such as low-fat yoghurts, grain-based breakfast cereals and muesli bars. We are all guilty of choosing the ‘Cashew, Oat and Yoghurt covered bar’ (example) over a chocolate bar because we think it’s better for us. Damon Gameau’s film and many other studies done worldwide actually prove that we may as well have eaten the chocolate bar because there is just as much sugar in the “healthy” option. Astonishing facts come out of That Sugar Film about many varieties of foods that Australian’s consume everyday because they think they are doing the right thing, and the scariest fact is that most of these foods are being eaten by children. On the first day of his experiment, Gameau prepared the below breakfast as discussed on his journey blog:

“1 bowl of Just Right (2.5 servings) One serving is 45g which when measured is not much more than a shot glass of Just Right. One serving has 12g (3 teaspoons of sugar), so 2.5 serves got me to roughly 7 teaspoons.

2 scoops of strawberry fat free yoghurt. This was 26g of sugar per serve but I removed roughly 8g for lactose which left 18g or 4 teaspoons of sugar

To my surprise, I had eaten 22 teaspoons while still at the breakfast table. The (American) heart foundation recommends 9 for the whole day. This was going to be easy”.

Just over half of Gameau’s target of 40 teaspoons of sugar per day had already been reached by breakfast, in what seems like a relatively normal and healthy meal! I mean, it isn’t Fruit Loops is it.

That Sugar Film continues to follow Gameau on his 60 day journey, and we begin to see the physical and mental effects that the increased sugar intake is having on his body. The film uses many scientific resources including Professors of Psychology in the United States and David Gillespie, Lawyer and Author of award-winning novel Sweet Poison. Comedic little cameos from great Australian actors like Brenton Thwaites, Isabel Lucas and Stephen Fry also appear in the film. As well as it being highly informative and scientifically proven, Madman (production company) and Gameau have also done a fantastic job in the special effects department. The movie is bright, exotic and aesthetically pleasing; I believe this is what will make it so attractive to children and to help them understand how bad some of the food they are consuming is, even though it tastes yummy. 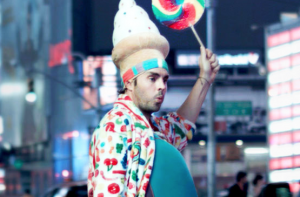 The most interesting and shocking revelation I found in the film was what Gameau referred to as ‘Mountain Dew Mouth’, a condition plaguing the state of Kentucky in the USA. Gameau and the film crew spent a couple of weeks exploring the United States, and as shown in the film they find that sugar intake is beyond imaginable. In the film, the film speaks with mobile dentist in a town in Kentucky. The dentist has a mobile practise in an RV van where he drives around the state to assist both adults and children with the problem of decaying teeth, what he calls ‘Mountain Dew Mouth’ the result of an addiction to Mountain Dew soft drink due to it’s large sugar and caffeine contents. Disgusting fact? Some parents are said to be putting Mountain Dew in their babies bottles. I can’t even!

Gameau also ventures to the remote Indigenous community in Amata, north-west South Australia, where in 2007 it was estimated that the 360 residents of the town drank 40,000 litres of soft drink in one year. As you can imagine, this is an alarming situation as there is approximately 9 teaspoons of sugar in just one can of soft drink! Thankfully, a policy was introduced called Mai Wiru or Good Food which changed the community’s attitude and approach to their health. Soft drinks were removed, healthy food stocked in the general store and free drinking water was provided. The community made a vast improvement in a small amount of time, and just a year later Amata had the lowest sugar consumption in the area. Unfortunately most Government funding for Mai Wiru was cut a few years back, but proceeds from the film and donations will help to keep it going. If you’d like to help out, click here!

In a nutshell (and let’s make sure that’s a raw, activated nut please!) That Sugar Film seriously opens the mind up to the dangers of excessive sugar consumption, how much sugar is hidden in ‘healthy’ foods and shows just how we can change this! Gameau gained 8 kilos in 60 months, developed a fatty liver and reached the brink of diabetes, along with significant mood swings and energy-level changes.

Let’s cut out refined sugar and help the nation on it’s journey to reducing the amount of obesity, diabetes and heart disease cases we have in Australia. Get your daily calories out of healthy fats, protein and complex carbohydrates like avocados, quinoa salads (no sugary dressings!) and eggs. Delicious! I absolutely recommend seeing That Sugar Film, have a look at the trailer below to see what you think. And if you’re anything like me and love a few cheeky lollies every know and then, this movie will re-assure you that this is OK if you are living a balanced lifestyle with the understanding that there are hidden sugars in many things on the supermarket shelves.