The rest of the Day 3 at MBFWA15 saw some inspired and innovative looks. Read below to find out more. 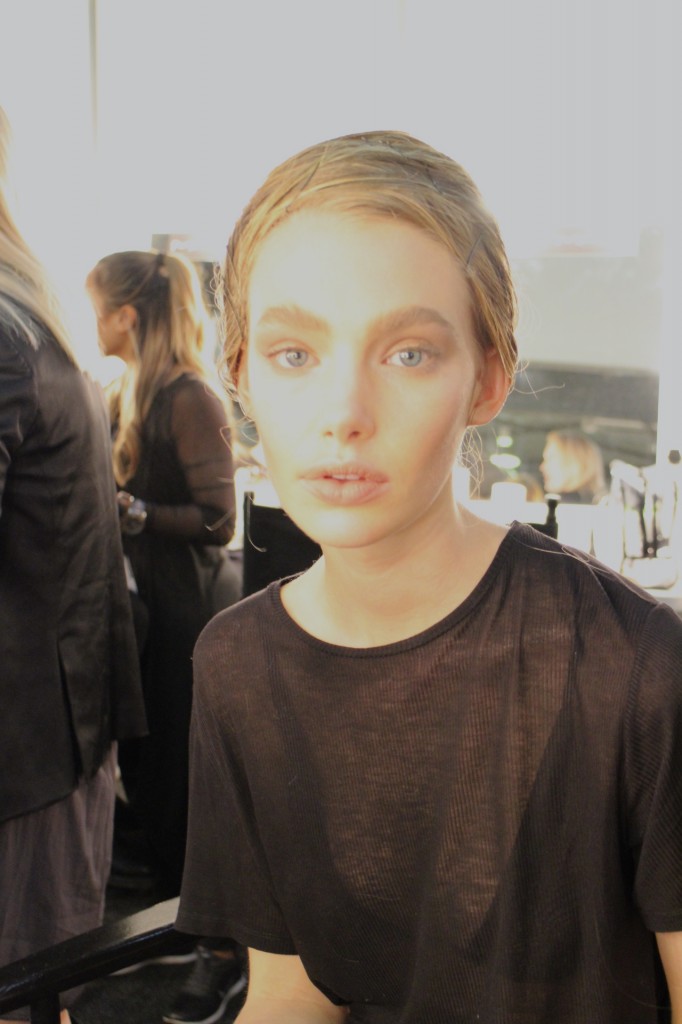 Carol Mackie followed the vision of ‘monks in Paris’ from Han designer Khim Hang and creative director, Margaret Zhang. “We used a lot of grey colours on the eyes and the lips” says Carol Mackie, a reference to the Cambodian heritage of Khim Hang and the collection. A bit of super gloss was added to the eye lids and face but matte down the centre. Skin was kept simple using oils, moisturises and highlighters with a bit of concealer where necessary. Brows were brushed up with pencil highlight on the inner corner of the eyes to brighten. 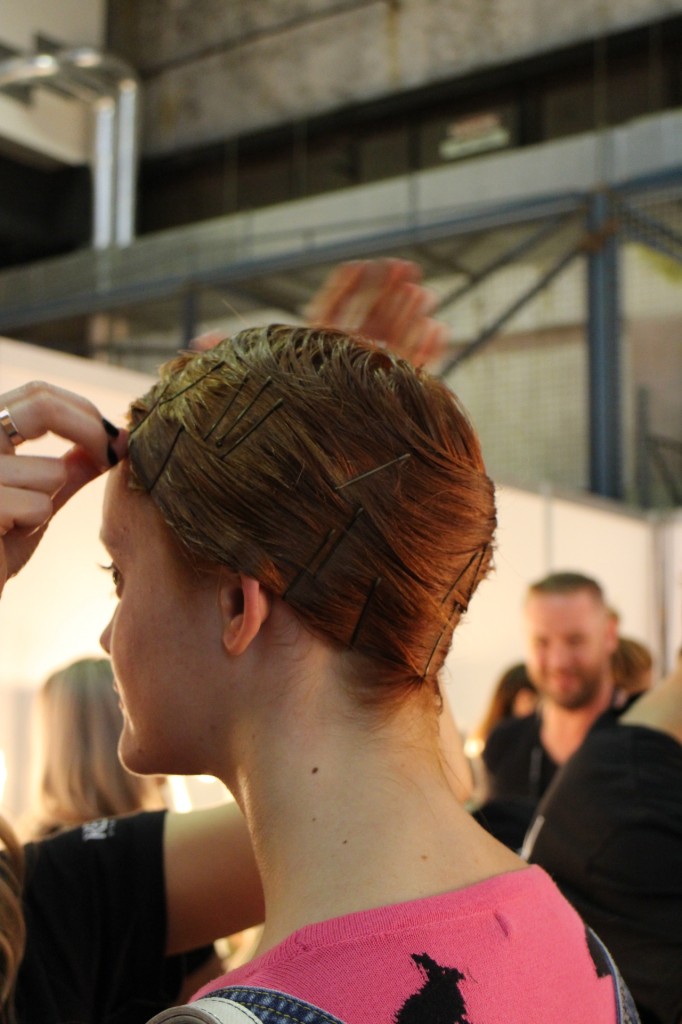 Paloma Rose Garcia for Redken said that the inspiration came from Han designer Khim Hang and creative director Margaret Zhang who were inspired by ‘monks in Paris’. The collection’s contemporary look meant that hair was up and off the face, wrapped around and flat to create that circular bald monk look. Using only Redken Diamond Oil on the hair, from roots to end, the hair was wrapped around, keeping it flat and using bobby pins to pin the hair down. The Diamond Oil created a slightly wet look but not saturated and helped to create definition and separation from the different wrapped layers of the hair.

To finish the look, a burgundy stain was added on the lips to add just a touch of colour to the lips. 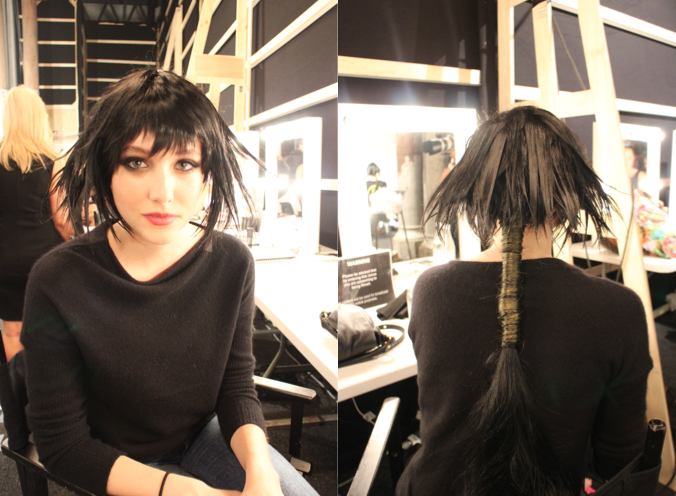 Richard Kavanagh for Redken created a dynamic look that was bold and striking.  He said “working with Zhivago, we get the opportunity to really put on a show. It’s like the theatre of fashion. We’ve created fashion warrior women who look like they’re ready to take on the capital”. The inspiration came from an Egyptian Manga character and used hair pieces and wigs to create the look. Each model has a black bobbed wig that has been razored to give ragged edges. Richard has then worked with Forceful 23 hairspray (the strongest hold) and heat to create a manga character’s hair – sections that are strong and flat. The next step he said was to “add an Egyptian vibe using Show Pony extensions as a pony tail stitched on to the back”. Hair was wrapped along the pony tail and then two coats of Redken’s new Color Rebel in gold painted on. Richard said that the look is a nod to the rave culture in fashion in the 90s. 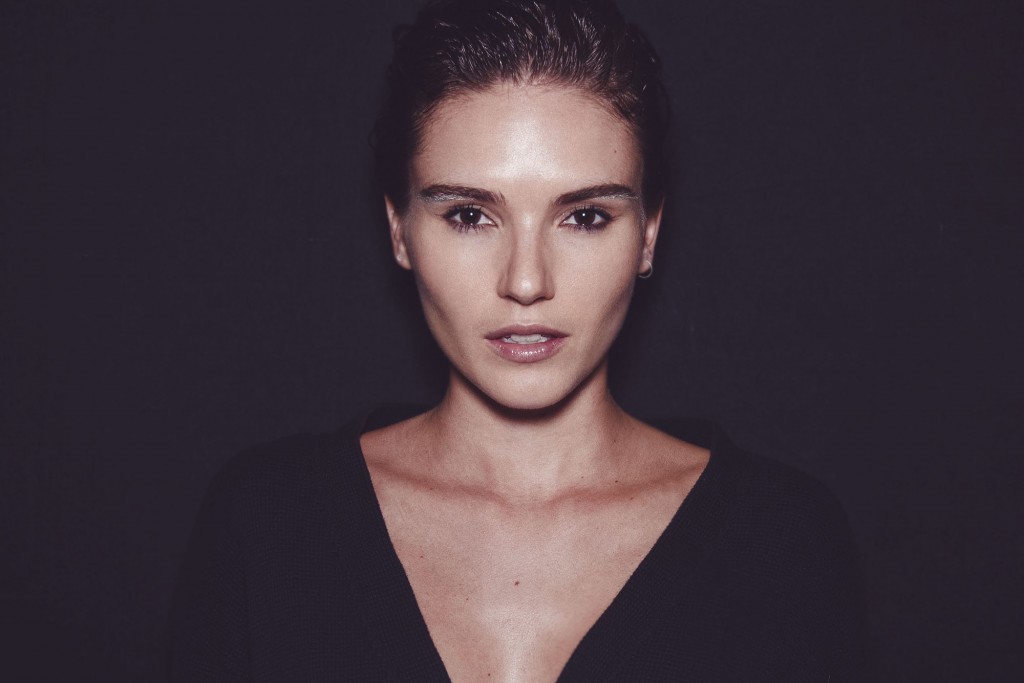 Nigel Stanlislaus, Makeup director at Maybelline drew inspiration from “women with an active lifestyle; women who want to look their best when they are working out or women who can dress up their look when heading out after the gym…Skin offers a healthy glow, mascara adds definition and glamour and a flash of silver adds a little excitement”

For the face, Nigel used Dream Pure BB cream and Super Stay Better Skin Concealer. To create the eyes, he used  Color Tattoo Metal Cream in Silver Strike and used  Full N’Soft Mascara (Waterproof) for the lashes. For the brow,   Brow Drama Brow Mascara was used to give a fuller look. To finish off, Baby Lips Lip Balm was applied for just a touch of sheen. 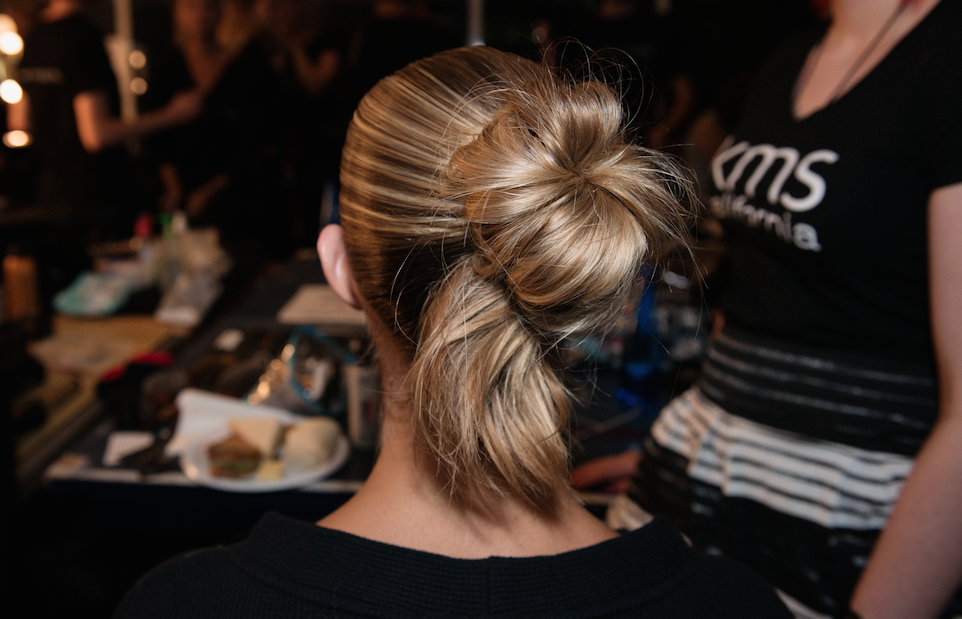 KMS California Hair Director, Garreth Lenagh of Prema, collaborated with designers, Jeremy Somers and Katinka Somers to create two hair styles to complement the theme of work-out and post work-out looks. “This year, the hair for We Are Handsome is very relaxed…a real and ‘lived in’ style. There is a sense of tailored polish or a more raw beauty which applies”, said Lenagh. The sleek knot was prepped with ADDVOLUME body build de-tangler, smoothing from roots to end. A ponytail was created to sit level with the top of the year and twisted in a knot.

Michael Brown for St.Tropez was tasked to create something that fit the fitspo trend and working on getting a glow that you get at the gym. Skin was warmer and they used Instant Tan in the deep colour because it gave a more olive complexion.

Skin illuminator was added to catch the light of the runway. 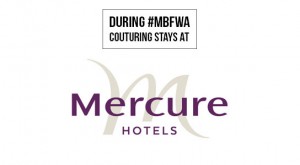