Ginger and Smart – Makeup by MAC, Hair by Redken Australia and Nails by essie

For Redken Hair Director Richard Kavanagh, the hair look was inspired by the prints and the colour palette and created a simple yet elegant look for the show. “We referenced the great portraiture of the 19th century, in particular Renoir’s bathers…the hair is polished but effortless,” continued Kavanagh.

essie painted a light coloured polish on the finger nails in limo scene and a beautiful copper metallic polish on the nails in penny talk that complemented the models’ shoes.

The look created by Nigel Stanislaus for Maybelline New York was a clean, luminous and nude sculptured face for a delicate but powerful look.  FITme foundation was used sparingly as a base with Color Sensational Stripped Nudes lip color in Coffee Craze was used to contour . On the eyes, Nigel opted for Expertwear Eyeshadow Quad in Designer Chocolates and Great Lash mascara in Dark brown. For lips, Color Sensational Stripped Nudes lip colour in Honey Beige was used to create a subtle natural colour. 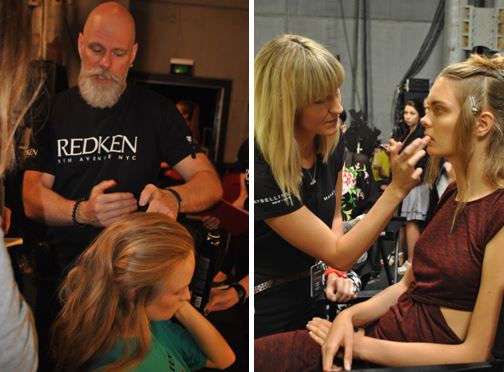 The ethereal look created by Phillip Barwick from Redken Australia encapsulated the inspiration of an elegant, strong woman. Wanting an organic and effortless editorial feel to the look, the key products Phillip turned to were Redken Rootful and Guts10 to get texture and a grainy effect on the hair that flows and catches the light of the runway. The organic look did have some precise elements with the hair raked back from the face with a twist.
essie created an interesting half moon design on nails using allure as a base and no place like home for the half moons (2 coats) followed by another coat of allure to set the look.
Talulah – Makeup by Bobbi Brown, Hair by Alter Ego Italy, Nails by essie
Alphie Sadsad for Bobbi Browns’ makeup direction complemented the exotic tropical theme of Talulah’s collection. Alphie chose to highlight the natural beauty of the models with bronze. “I wanted to highlight the complexion of the models and exaggerate a healthy summer glow for maximum impact on the runway” 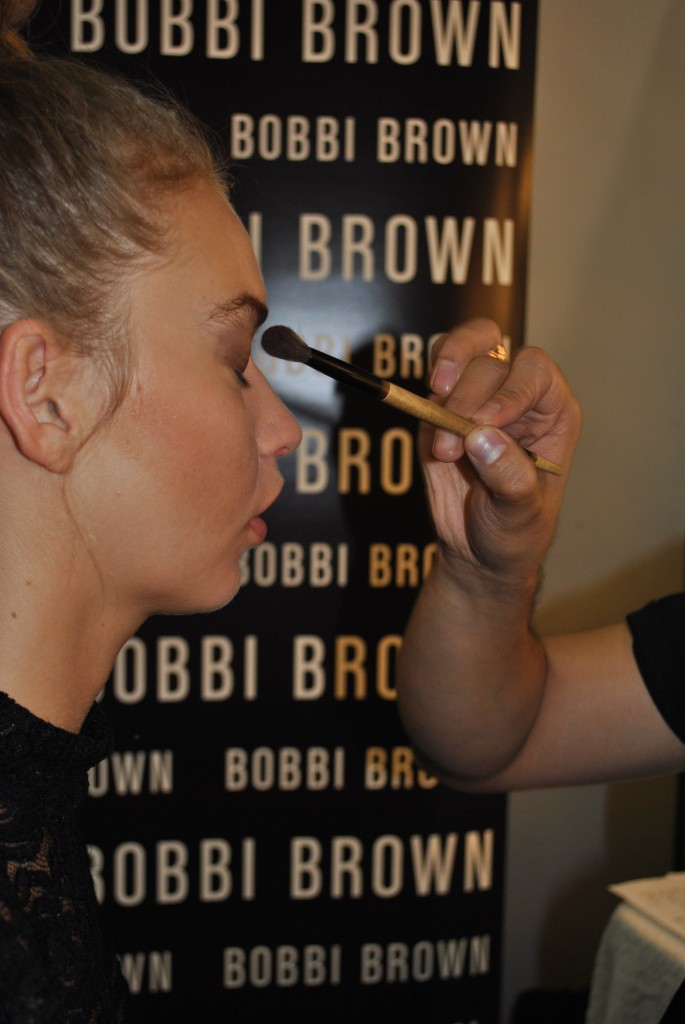 Patting Skin Foundation stick on the face, Alphie wanted the skin to shine and to show freshness to the look. Skin foundation stick has a new formulation to look like skin and was used on areas that needed it, including around the nose and under the eyes. Shimmer brick (all colours) was used on the cheeks to give colour and then two cream shades were used on the eyes. Liner was then placed on the between the lashes on the lash line to define the eyes.
A fun, poolside glamour look was put together by Alter Ego Italy for the Talulah show. Hair was pulled up to create a really nice bold shape, working with the models natural texture. Using the Hasty Too range, hands instead of brushes and tools were used to scrape hair up to the top of the head into a pony tail and then folding it back on itself to create boldness on top. “Using the remainder of the elastic we are then tying that off, creating a bold tail effect,” says Craig Smith from Alter Ego Italy.
essie kept with the tropical theme with bright blue butler please followed by a coat of good to go for quick drying and shine.
Leroy Nguyen – Makeup by The Makeup Academy, Hair by ghd and Tan by LDN:SKINS 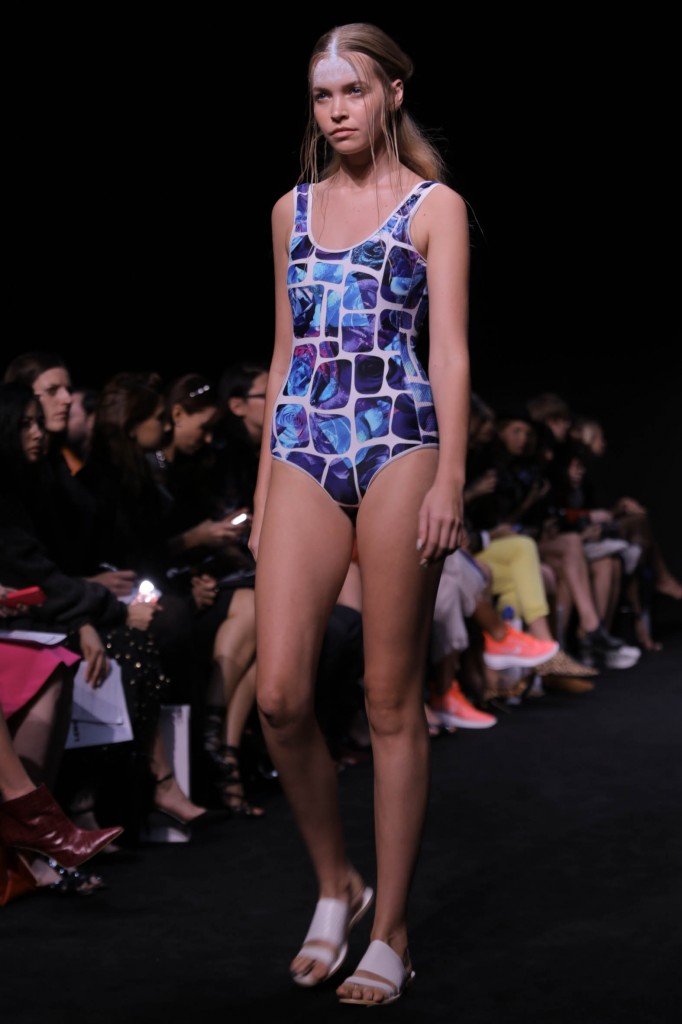 A dewy look was created using Gorgeous Cosmetics’ CC cream and Berry Cream blush, with shimmer dust on the eyes and cheeks. A blue pigment was applied to the centre of the hair part to represent pollen from blue roses which was the inspiration for Leroy’s show.

“We loved the whimsical brief of Leroy’s ‘Blue Rose’ collection, inspired by Pan’s Labyrinth. For the hair look we kept a mystical essence while still using a strong structure in the shape, juxtaposed with a feminine softness & freshness using the wet tendrils around the face. It was a little sculptural sports, with a whimsy touch.” says Robert Bava, ghd Hair Director. Total Volume Foam was used to give the hair some hold and texture whilst Curl Hold Spray was worked through the top and set with a hair net to create a ridge to give it a geometric shape on top.

LDN:SKINS created a golden tan for the models at Leroy Nguyen’s show. Known as Natural Tan, the models’ complexions were golden and dewy, as they had been kissed by nature. Natural Tan by LDN:SKINS was uniquely created for Leroy Nguyen to ensure his vision of escaping the city environment and reconnecting with nature, was accurately portrayed. 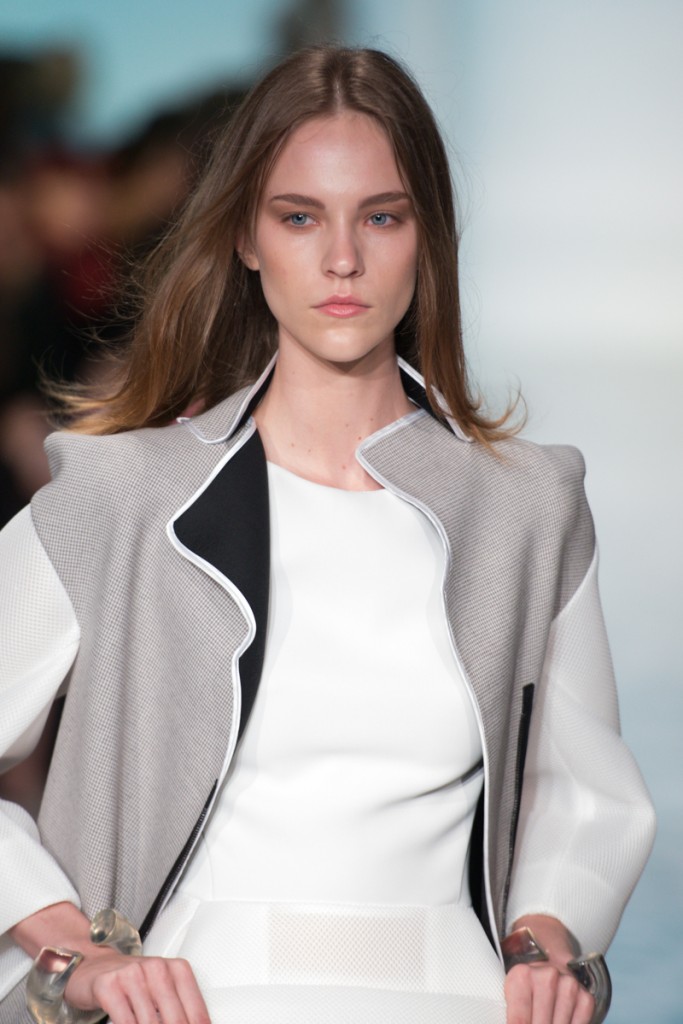 “Elegant, timeless, expensive..the effortless beauty of a Parisian “It” girl” was the inspiration behind Nigel Stanislaus’ look he prepared for for Toni Maticevski’s show. Nigel, from Maybelline New York, said that “preparing the makeup look for Toni’s show was all about team playing and working out what Toni’s style is and what are the colours and designs of the show” The result was a beautiful and elegant makeup look with a focus on luminous modern skin. Maybelline New York FITme foundation was used up sculpt the face, feathering it with a brush over the base to create the base. Bronzer was used on the lids for colour and on the cheek to give some contour. Baby lips was again used on the lips to create a bit of shine. In Nigel’s words “it is all about application and texture.”
Hair by ghd was all about channeling an impeccably dressed Parisian “It” girl, said Jayne Wild of ghd. The foundation of the look was the initial perfected blow dry which was then “undone” to texturise the hair creating an effortless yet expensive look.
“Toni and his team wanted something really complimenting the icy clean lines of this collection, so he has gone for three colours to mix things up a little bit. The colours are ‘Passion’, ‘You Callin’ Me a Lyre?’ and ‘Alpine Snow’, all finished off with a matte top coat, so they are very soft, ” says Karon McKendrick-Taylor from O.P.I. The nails featured lettering that spelled out terms of endearment including “Love Me”, “Love you”, “Adore you” and “Nice girl”.
Christopher Esber – Makeup by M.A.C. Cosmetics, Hair by ghd and  Nails by essie 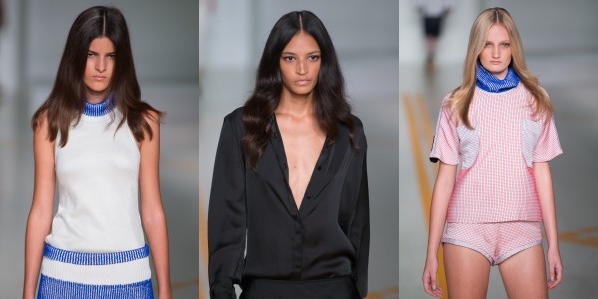 The look created by James Molloy from M.A.C Cosmetics was a “morning-after-the-night-before make-up…she’s a beautiful girl that’s just forgotten to take off her eye makeup” leaving a smudgy creamy black in the lash line. Black Black Chromagraphic Pencil and Black Paint Stick  were used. With skin, it was stripped right back with Prolongwear Concealer used where needed and some Sepia cream for the base. M.A.C Sculpting Cream Coffee Walnut brushed on the cheek, chin and bridge to create a bit of a healthy glow.
Alan White from ghd created a soft and healthy look with a slight natural bend through the mid-lengths. Keeping with the theme of Christopher Esber’s show which pays homage to working women of the sea, the hair look was designed to lift gently as models walked down the runway, recreating moments where the hair catches the breeze of sea air.
essie opted for a matte look to complement the show, with sand tropez used as a base and topped with matte about you.