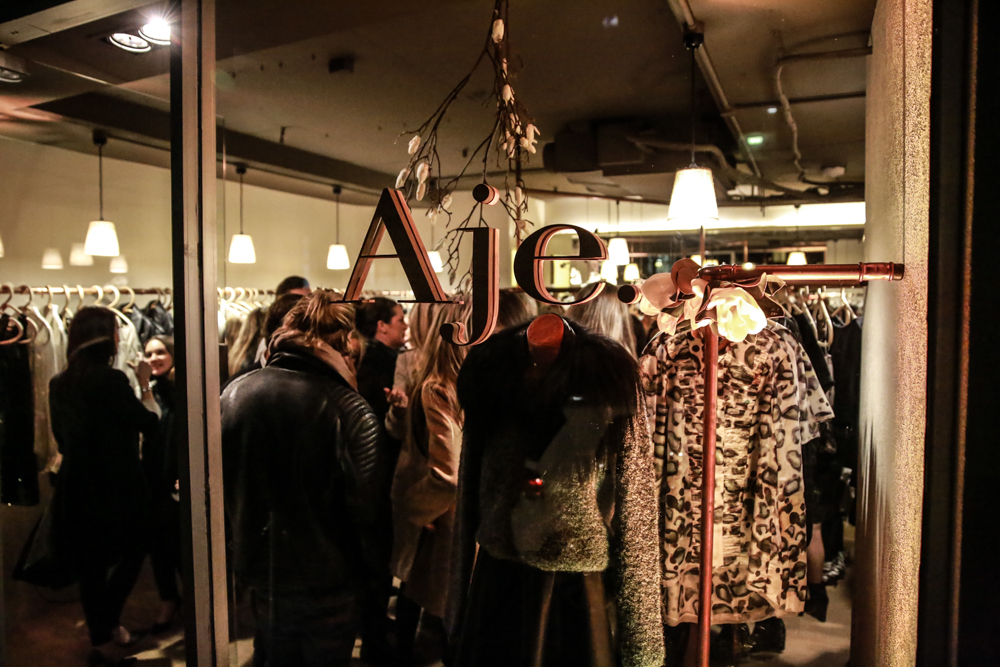 The Aje boutique, nestled in the heart of South Yarra’s style mecca, launched to the public in March but celebrated its grand opening with a launch party last week for Melbourne’s fashion elite. Fashion editors, prolific bloggers, Melbourne celebrities and TV stars all rubbed shoulders in the elegant store as Aje designers and best friends Eddi Robinson and Adrian Norris worked the room. Guests enjoyed Tempus Two wines and Santa Vittoria water while taking fashion notes on the collection and catching up with fellow Aje devotees.

Aje presented an exclusive preview of its current season ‘Reflections’; a dramatic dark collection featuring structured leather, embellished figure-shaping gowns, and effortless separates. The leather is buttery soft and, as always, the embellishment is heavy and intricately detailed. The craftsmanship and masterful design that goes into each Aje piece is genuinely astounding. Each piece is fearless in its individuality- Aje stands out from the fashion pack with a unique style that simply cannot be replicated. Directional in its design, yet timeless in its quality, Aje’s ‘Reflections’ collection is truly spectacular.

Aje was founded in 2007 by Eddie Robinson; a former fashion journalist, and Adrian Norris, a trained artist. The lifelong friends grew up on the sunshine coast of Australia and draw inspiration from ocean-lapped shores of their home and exotic far-flung destinations, always with natural materials given a couture edge. Seven years on and Aje is a leading Australian fashion brand boasting a global cult following, portfolio of creative collaborations, and signature boutiques in the country’s major cities. Edwina and Adrian scooped the Chambord Shine Designers of the Year award in 2009, Aje collaborated with high street brand Sportsgirl on a capsule collection of its trademark pieces, and the label was hand-picked by Brit model Kate Moss as she shopped during her husband’s tour of Australia.

The Aje Melbourne store is located at 566 Chapel St, South Yarra and is open seven days a week. The brand will continue its love affair with the Victoria city opening a second Melbourne store this season.

Aje is sold in its own stores in Australia’s major cities and online at a-j-e.com.au.