Despite arriving at our shoot with not an ounce of makeup on, it’s easy to see why the gorgeous Nadia Coppolino caught the eye of AFL footballer, Brownlow winner and now fiance Jimmy Bartel. With luscious locks, glowing skin and a body to die for, Coppolino is not only beautiful on the outside, but has a warm, bubbly personality, and was every inch the professional on our shoot.

After working as an Advertising Account Manager for both ACP and Pacific Magazines, Coppolino recently quit her job to pursue her dream of launching her own blog, Chronicles of Nadia. A shameless fashion lover and shopper, Coppolino decided to create her site after finding that while she still loved magazines, she noticed she was more and more turning to online resources to search for style inspiration. She wanted to create a site to share the inspirations she found and share her love of fashion and events. Chronicles of Nadia is her way of keeping her followers up-to-date with her style and events around town, and feature interviews with some of her favourite and inspirational women. Despite initially being hesitant to start her blog, with a little encouragement from Bartel, Chronicles of Nadia was launched at the end of February and has already garnered a loyal following.

Currently in the process of planning her own wedding, Coppolino was the perfect person to feature in our Bridal Week editorial. She laughs as she tells us the story of how her and Bartel met. After being introduced by a friend 5 years ago at a Red Bull party, Coppolino and Bartel corresponded online for months before Bartel asked her out on a date. Upon finding out that he was a football player and lived in Geelong (Coppolino lives in Melbourne), she was initially hesitant to commit to anything, however, she smiles as she recalls their first date, and how she could tell straight away that there was a connection between them. Since their first date, Coppolino and Bartel have been inseparable. 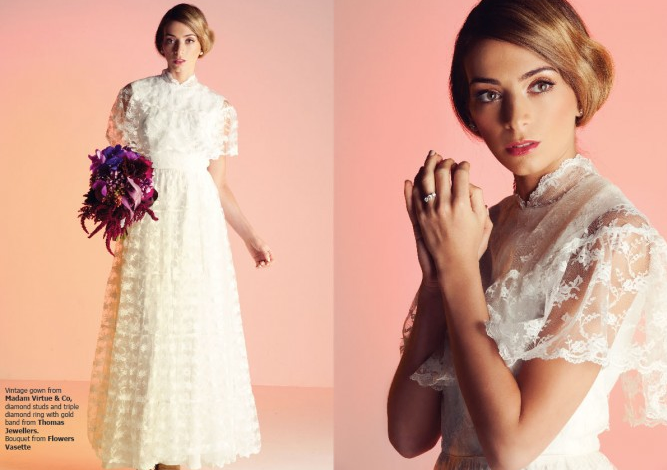 Despite Bartel being one of the most successful and popular footballers, Coppolino says that he is shy in comparison to her and while she loves going out, he prefers staying in. This difference in personalities didn’t stop Bartel from proposing at the end of last year on a beach in Mexico, after asking her parents for permission a month earlier. Coppolino spoke about how it came as a total surprise. Initially popping the question with a gorgeous diamond band, upon returning to Australia, Coppolino and Bartel picked out a stunning engagement ring featuring a beautiful round solitaire diamond with diamonds around the band from Thomas Jewellers. Currently the face of Thomas Jewellers, the stunning Coppolino is the perfect ambassador for the brand.

With the footy season limiting potential dates for a wedding, Coppolino said her and Bartel are looking at a February 2014 wedding. Still working on finalising details for their wedding, Coppolino speaks frankly about the difficulties most brides face when planning their special day, such as finding the perfect location, the perfect dress and the perfect aesthetic all while trying to keep costs under control.

Modelling dresses from  J’Aton, Toni Maticevski, Madam Virtue & Co, Gwendolynne and Pamela Usanto, with beautiful bouquets from Flowers Vasette, Coppolino’s model-like frame looked fantastic in every style. However, she still expressed the challenge she had working out whether to go with a more fitted silhouette, or going for something bigger and more traditional. It’s safe to say that whatever design she choses, she will look amazing.

As Nadia leaves the shoot, you can tell that she is excited about the future. With an upcoming wedding to her soulmate and and her new career direction, you can’t help but think the Chronicles of Nadia are set to have a happy ending.