I recently read that facials are the “new black” for men.  Wise sentiments indeed.  However, if your metro-meter is passing through coral up into fuchsia, then perhaps it’s time to consider a pedicure.  I like to think that I recognise the importance of looking after one’s feet.  I unequivocally support Giorgio Armani’s sagacious view that cheap shoes are the ultimate false economy, and having spent many winters in Germany, I am well aware of the relationship between cold feet and unqualified misery.  And yet despite my ‘investment’ in hand made shoes, I recently had pause to reflect on my attitude towards caring for my feet, which appeared in hindsight to be rather facile.  After all, I have regular massages and facial treatments, however, it had not occurred to me to devote the same attention to the hardest working parts of my body – my feet.

The catalyst for this sudden perspicacity was a chance trip to the Day Spa at the Intercontinental Hua Hin on my holiday to Thailand.  Never having been averse to a multi-buy deal, the entreaty of a pedicure following my hot stone massage was too alluring to resist, beside which, as evidenced by the pink flamingos on my swimming trunks, I am not afraid to step outside my comfort zone.  What ensued was an extremely relaxing experience which was luxuriously gratifying in a way which I had not expected. 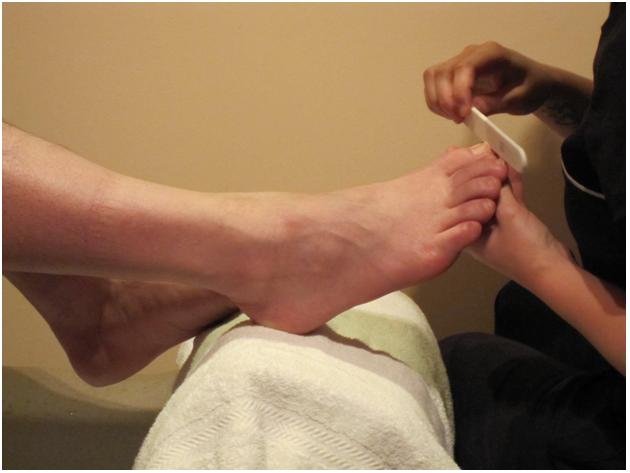 It was clear from the look on the face of my pedicurist that she could tell that this was my first time.  I suppose I had never really considered the appearance of my feet sans chaussure to be of any great moment.  Notwithstanding the state of disrepair she found my feet to be in, the pedicurist was not discouraged.

The treatment began with a soothing foot spa.  Wherein the pedicurist bathed my feet in warm water infused with fresh mint, which helps to soften the skin and nails.  It was at this point that the realisation of what I had been forsaking all these years set in, as a tide of tranquillity slowly moved from my feet all the way up to my shoulders.

The pedicurist then proceeded to exfoliate my feet with a sea salt scrub, which proved very effective in removing dead skin and smoothing away calluses.  The sensation of the abrasion between my toes was tremendously satisfying, as though an itch had been scratched after years of neglect.

After rinsing off the scrub, the pedicurist proceeded to cut my nails.  This was a task which was negotiated with great aplomb.  I never would have imagined the precision that would go into such a seemingly simple undertaking, however each nail was dutifully attended to, and filed to ensure the smoothest of edges.

Thereafter my feet were rubbed with tea tree and peppermint oils, and I was given an acupressure massage.  This was particularly beneficial, as my relatively flat feet absorb a fair degree of impact throughout each day, and I could feel the tension under my arches dissipate rapidly as the pedicurist applied pressure to the area.

Finally, I was asked if I would care for any polish.  This, however, was a bridge too far even for me (and my pink flamingos).  Politely I declined.  The treatment was finished with a cup of ginger tea which was invigoratingly spicy.  Overall, what started out as a leap of faith proved to be a most rewarding experience, and one that I am sure will be a regular indulgence in the future.

Who knows, perhaps shellac is the new black for men…