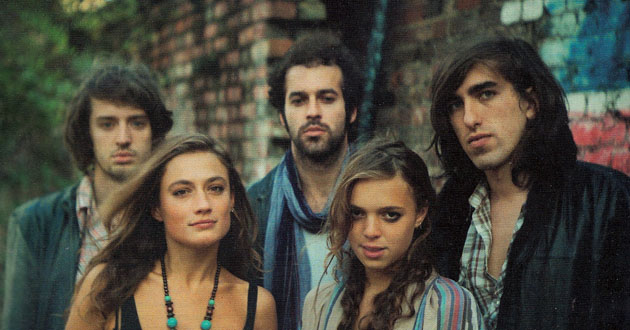 Calypso beats, seventies sequin threads and faux American accents; it could only be the return to Melbourne of London based band Crystal Fighters to The Corner Hotel, Richmond.

Not what you expect from your average Monday, The Corner was packed out with a fun loving crowd to celebrate the arrival of the electro folk, divine vocals of this British alternative synthpop band.

Their set covered a multitude of tunes such as You and I and LA Calling from their latest album release “Cave Rave” described by the band themselves as  “a meeting of old and new, human and robotic.” Their fast pace and energy had the smiling crowd going from the start, a dancefloor sing-a-long to Love is all I got and  I love London with a rapturous clap along and on the shoulder dancing.

Not forgetting the impressive drum solo from Andrea Marongiu these guys have talent oozing from their glittery bodies. A band perfect for a festival or small venue gig, the last leg of their UK, European, American and Australian tour looks set to be a hit with their infectious party atmosphere. Percussion frenzy and a semi naked guitarist left the audience feeling energised and engaged from start to finish. An encore for the crowd ended the evening with a combination of both melodic and merrymaking hits to see everyone off home.

Sequins are not worn enough in everyday life in my opinion; people take inspiration from Crystal Fighters whilst dressing and dancing like a disco ball.

Love Natural from the new album Cave Rave will also feature on the upcoming Fifa 14 release.

Check out more on the band here: http://www.crystalfighters.com/