This year has shown some of the worst of human nature, and in response, General Pants Co. have launched an unprecedented campaign to make a real difference this Christmas.

General Pants Co. storefronts and online will be renamed to General Peace Co., with all branding reflecting the change as the youth retailer aims to spread a message of peace to the world. General Pants Co.’s brands have also rallied behind the initiative by creating a ‘Give Peace’ t-shirt range which will be sold in stores across Australia and internationally and feature designs from renowned brands Stussy, Ksubi, Santa Cruz, Neuw, Zanerobe, Vans, Insight, Candidate and RVCA. 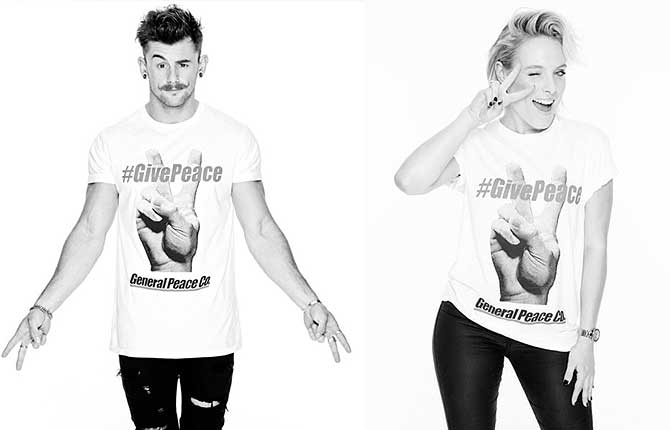 100% of proceeds from the $39.95 range will be donated to Save the Children Australia and Oasis Youth Support Network – two important charities that share General Pants Co’s determination to make a difference.

“One #GIVEPEACE t-shirt could immunise 55 children from around the world against a life threatening disease” said Julia Curtin, Manager, Corporate Partnerships, Save the Children.

“One #GIVEPEACE T-shirt will feed and house one young person for a day at Oasis Crisis Accommodation, Sydney” said Major Keith Hampton, Director of Oasis.

In order to spread the ‘Give Peace’ message far and wide, a star-studded collection of celebrity ambassadors will throw their support behind the worthy cause by sharing images of themselves with the hashtag #GIVEPEACE and encouraging their followers to buy a ‘Give Peace’ t-shirt or donate.

The project has had a snowball effect with everyone that hears about it wanting to get on board in some way shape or form by either donating their time to the project or by simply agreeing to take a picture and sharing it on their social channels.

In addition to making a huge difference this Christmas, consumers who share a #GIVEPEACE message on their social media will receive 15% off their purchases at General Pants Co.

Craig King, General Pants CEO said, “2014 has been a tough year for the world. From the conflicts we see on the news every day to youths requiring assistance even in our own backyards, now more than ever the world could use a little bit of peace and help.”

“We have asked our friends, family and employees to all get behind ‘Give Peace’ and hope Australians do too,” said Craig.

To get involved with the campaign, you can connect with the social media channels here: http://www.facebook.com/generalpantsco
http://twitter.com/GeneralPants_
http://instagram.com/general_pants