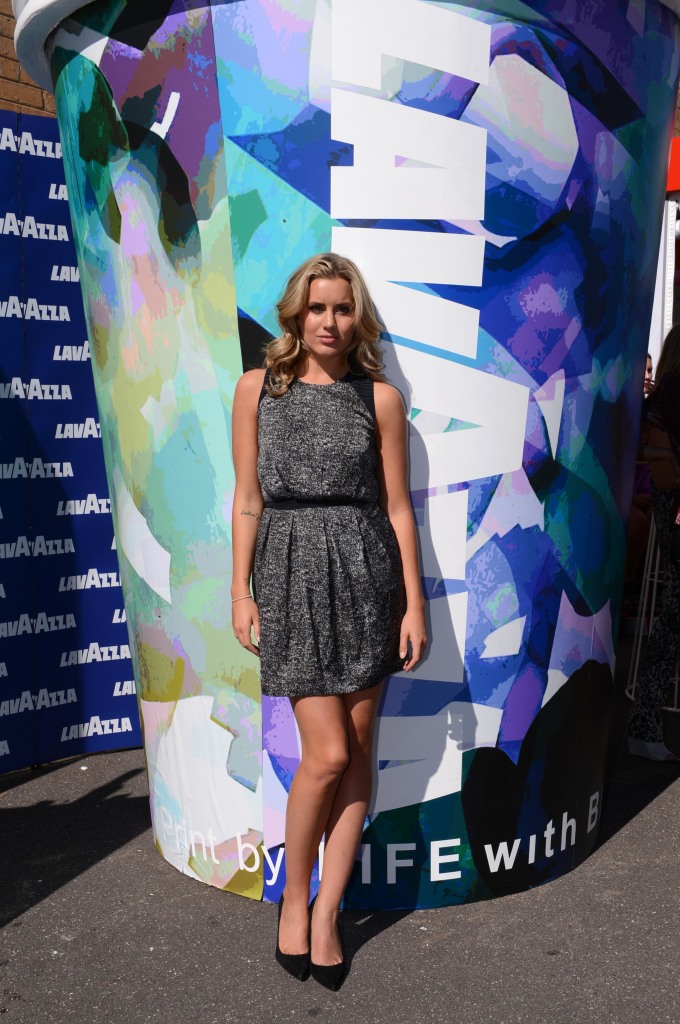 In a L’Oreal Melbourne Fashion Festival first, festival partner Lavazza have teamed up with Melbourne based LIFEwithBIRD designers Bridget McCall and Nicholas Van Messner to create a unique coffee and lounge experience for fashion devotees and caffeine addicted Melbournians alike.

McCall and Van Messner, joined by international Lavazza ambassador, singer, fashion designer and former reality television starlet Caggie Dunlop as well as LMFF devotees and bloggers Jasmin Howell and Fenella McCall (dressed head to toe in spectacular LIFEwithBIRD designers) unveiled the Lavazza A Modo Mio Lounge- a pop up cafe open at Central Pier, Docklands throughout the festival. Smooth espressos served in LWB watercolour printed cups and sweets courtesy of MoVida were a welcome treat as the sun burst through the clouds over the harbour this Autumn morning. A giant, LIFEwithBIRD printed Lavazza coffee cup provides an eye catching centrepiece in the hub of the festival.

Lavazza have also launched their Lavazza Look competition. Simply snap a photo in front of the specially designed mega-cup at the on site cafe, upload it to either Facebook, Twitter or Instagram (or all 3!) with the hashtag #lavazzalook. UK socialite and Made in Chelsea star Caggie Dunlop will be attending LMFF as a guest of Lavazza and will be judging the competition. A daily winner chosen by Caggie will receive a Lavazza prize pack including an A Modo Mio machine and Tierra coffee as well as a $50 LIFEwithBIRD voucher. An overall winner will also receive a major prize including an overnight stay at The Olsen Hotel, a $500 LIFEwithBIRD voucher and $250 dinner at Baby restaurant.

This is truly a collaboration all Melbournians can enjoy. “We’re based in Melbourne, and Lavazza were looking for someone who really signified a Melbourne based brand that were showing at the festival,” Bridget McCall tells me. “Collaborations are always amazing because you can really reach a different demographic that you may not have had the chance to touch on before. Lavazza have been involved with the festival for so long so it just makes perfect sense to collaborate with someone like them. It’s such a unique experience for us.” The fusion of design and hospitality is a celebration of 2 things all Melbournians love- fashion and coffee. “I couldn’t agree more,” says McCall. “To me, Melbourne’s a very European city in regards to its bars, street art down nifty little lane ways, the galleries… It’s all about the culture. And everyone comes to Melbourne to shop!” It’s our retail driven city that really makes the festival what it is today- a fashion festival really aware of its audience. A festival that isn’t afraid to do something a little different. “LMFF is so special because it’s really a consumer based event. You’re seeing looks that are in store right now. Overseas you won’t see a look from the runway until anywhere between 3 and 6 months down the track, whereas in Melbourne you can literally shop the runway which is such an exciting thing for consumers,” says McCall.

Caggie Dunlop of Made in Chelsea fame has recently relocated to Sydney, and can’t speak highly enough of the land down under. “I’ve already spotted the differences between Melbourne fashion and Sydney fashion,” Dunlop tells me. “Sydney is a bit laid back, but in Melbourne people experiment. You could compare it to a haircut- Sydney would be a blow wave, and Melbourne would be some sort of asymmetrical cut. Melbourne is a bit more like London as it’s that bit cooler so you can wear a few more layers.”

After discussing Caggie’s whirlwind move down under (including finding herself on a horse in a ball gown at the Portsea Polo mere hours after hopping off a flight from the UK), our LMFF must-sees and the Mary Katrantzou phenomenon that has been so often referenced, if not plagiarised, by several designers in recent years, we got on to the topic of the accessibility of Melbourne fashion. “I love Australian designers because they are very Summer orientated, whereas in England in the cold I just want to be warm. I don’t care as much about fashion when I’m trying so hard to stay warm. I enjoy the fashion here a lot… it’s dangerous though. In London we have the high street and then there’s the big designers- there’s a big gap between them. But here there’s so much stuff in the middle, pieces and brands that are so on trend but also really affordable. It’s very dangerous as far as shopping goes!”

Make sure you head down to the Lavazza A Modo Mio Lounge to experience Melbourne fashion in all it’s glory by sitting back with an espresso and taking it all in. Remember to hashtag #lavazzalook for your chance to win!

Solo image of Caggie Dunlop courtesy of Jim Lee. All other images by Gemma Watts