To be honest, I’m always a bit sceptical about the hype surrounding new Melbourne restaurants. People always jump on the bandwagon and I sometimes get swept away with the hype only to eat at a restaurant and then just be disappointed. Whether it’s the service, the food, the price or the ambience, it is difficult to get it right. It’s good to report that Toko Melbourne didn’t disappoint and lived up to the hype that I had heard.

The restaurant is modern and happening, reminiscent of a hip restaurant in New York. I’ve been to the original restaurant in Surry Hills in Sydney and this has a more Melbourne feel, perhaps due to the size of the venue it makes it less crowded than the one in Sydney. The restaurant features distinct sections. Along one side of the restaurant you find a large bar that runs a significant way up the venue, meaning you can drop in for a casual drink. There is also a courtyard bar, decorated with colour umbrellas dropping from the ceiling giving it a fun vibe where you can also spend some time having some of the delicious cocktails on the menu. 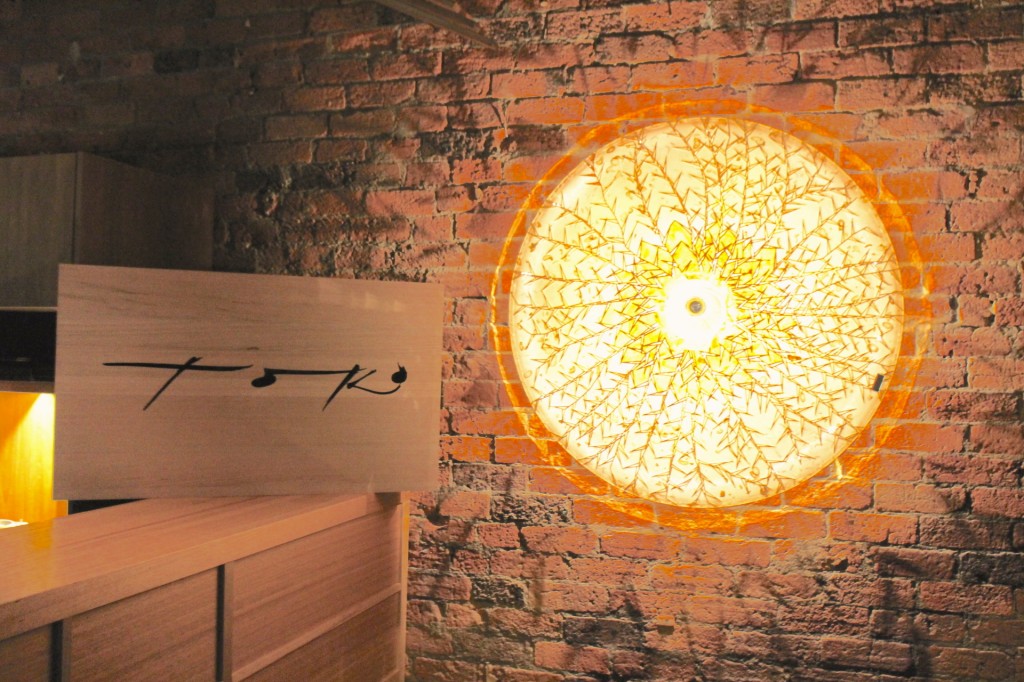 On the other side of Toko Melbourne is table seating where there are large share tables and smaller tables. At the back of the restaurant is the open kitchen where you can sit and watch the action in the kitchen. And I’m sure there’d be plenty of action with the Izakaya style menu on offer featuring the dishes cooked Robata grill, sushi and sashimi and a variety of delicious small dishes, and not to forget dessert.

The focus of Toko Melbourne’s menu is on modern Izakaya dining, meaning it uses traditional Japanese flavours and dishes but adds a modern twist. Many of the dishes we enjoyed during our meal reflected this through minor or major tweaks to traditional dishes.

The menu is designed for sharing and you can start off with smaller dishes along with sushi/sashimi to whet the appetite. You can then move onto the larger dishes that are a bit heavier but nonetheless delicious. 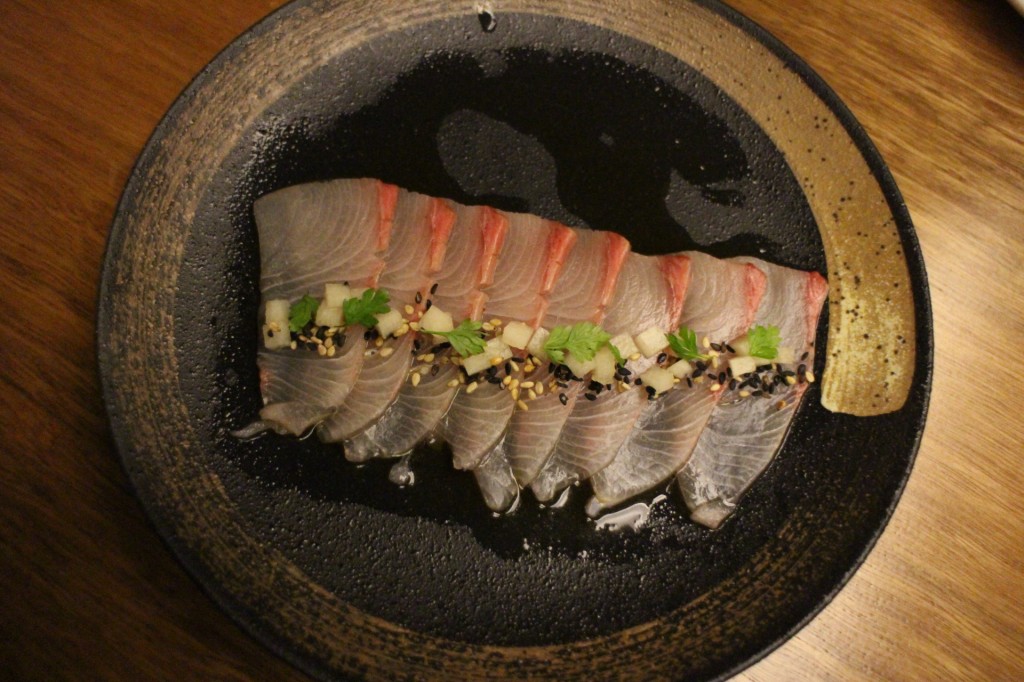 We started with the hiramasa no usuzukuri – kingfish with yuzu and chives and the koushi no tataki – venison carpaccio with nacho pear, yuzu koshu and potato airbags. The Kingfish dish was an absolute delight and probably one of the better Kingfish dishes I’ve had lately. The yuzu dressing gives the dish a bit of a punch and the sweetness of the chives work perfectly to match. 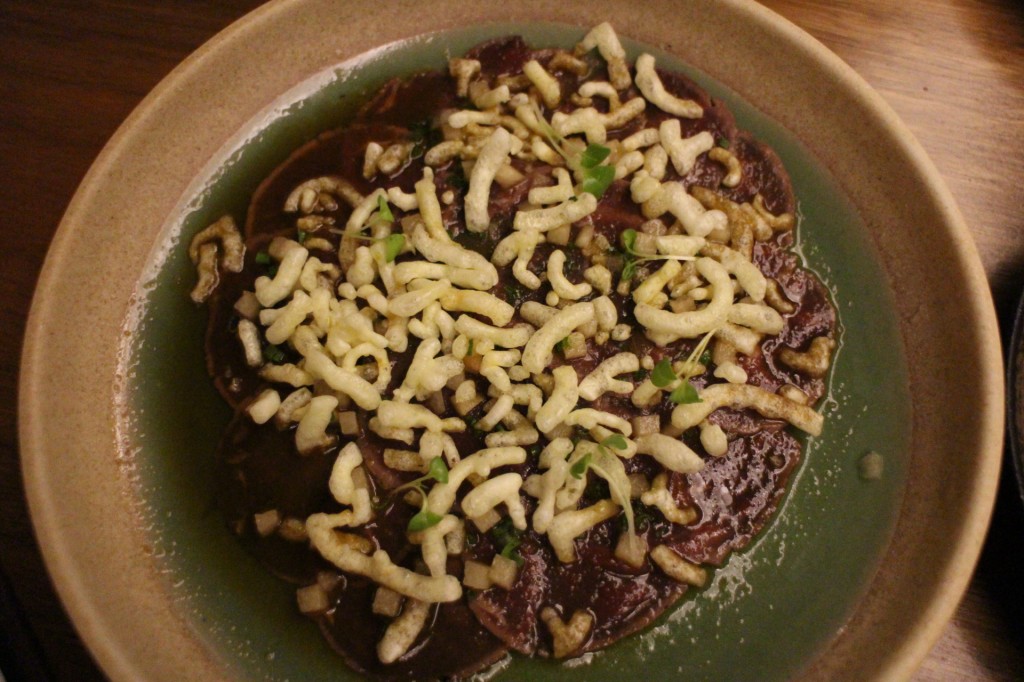 The Venison carpaccio was also a great starter dish. I have to say it’s not the most attractive dish but wow it tasted good. The saltiness from the venison mixed with the citrus yuzu and the sweetness of the nashi were perfection. Add in the crunch of the potato airbags and it’s a magnificent dish.

We followed these dishes by selecting a few dishes from the Sushi & Sashimi and tempura section. We selected the Toko Signature sushi dish hotate no ponzu to wasabi ae gunkan which is essentially chopped scallop, ponzu, wasabi wrapped with cucumber. Amazing. This is a must have.  The sweetness of the diced scallop sashimi and the dressing were the perfect combination and that soft bed of rice with the crunch of the cucumber was absolutely delectable. 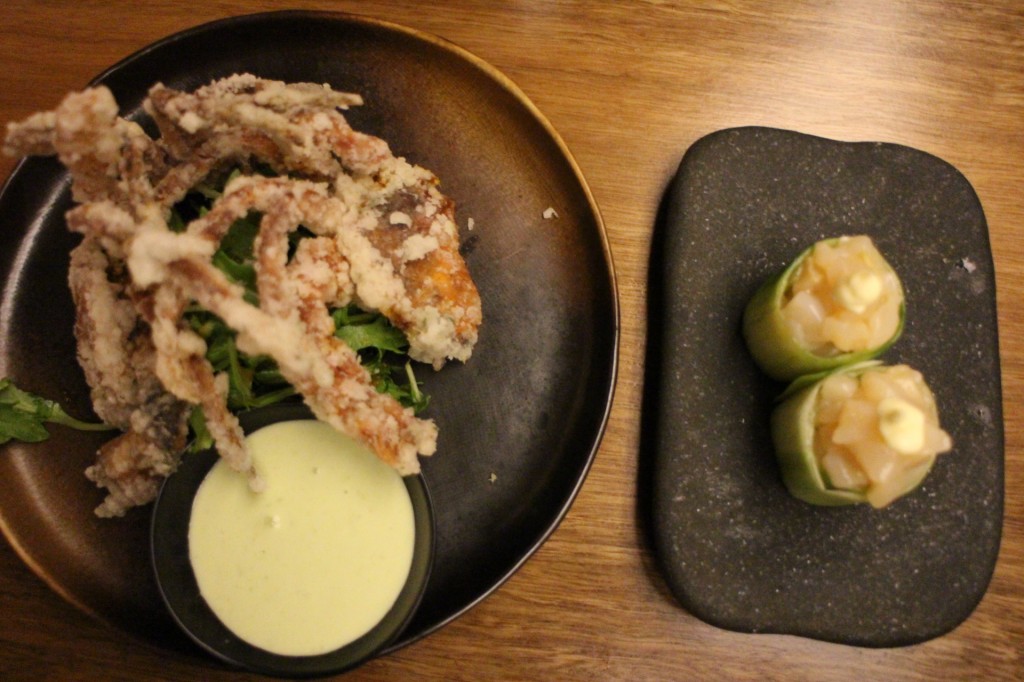 We also sampled pirikara aburizake to avocado maki – spicy seared salmon Toko roll which was not just your average cut roll. The outer part of the sushi was dusted with squid ink tenkatsu, a type of fried batter with squid ink, creating an extra level of texture to the sushi roll. 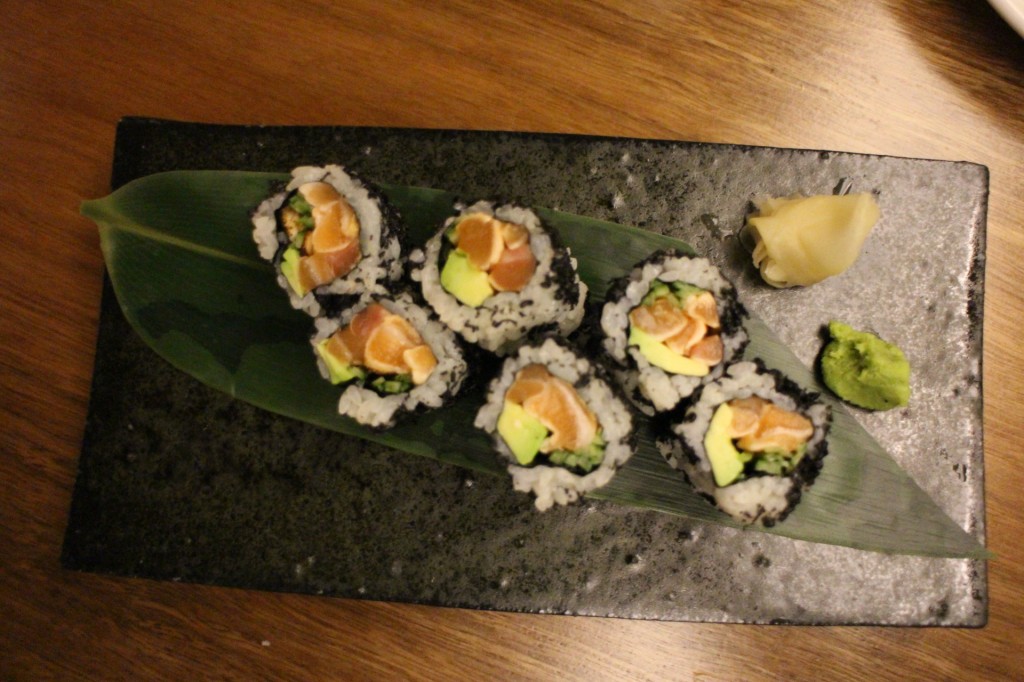 For the mains we tried items from the Robata Grill.  The way that our host described Duck dish, kazoo to nashi no namatsu  was that is was elegant in its simplicity. A perfectly apt description of this dish. Three simple items on the menu – grilled duck breast, sansho pepper and pickled nashi pear. The duck was cooked perfectly, tender and juicy and just dipping it in the pepper and having it with the pear was a flavour explosion of spicy, sweet, salty. 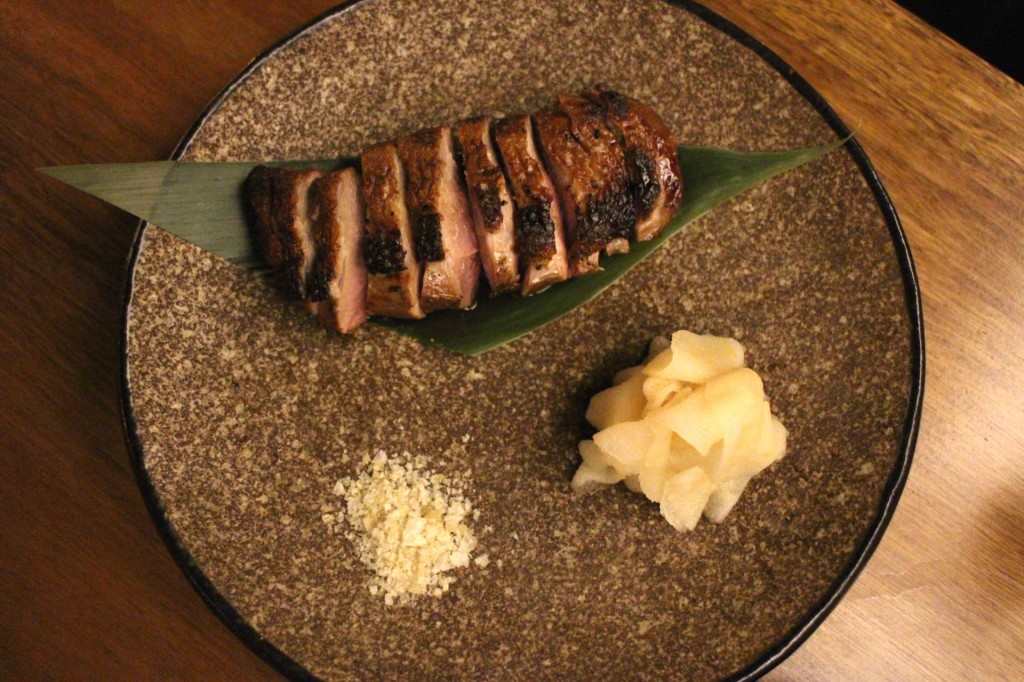 The second main we had was the haha no sake yaki, saikyo miso black cod with pickled ginger. I love this dish and it really rates as one of the better I’ve had in Melbourne, especially given that a few days later I went to another restaurant where I sampled the same dish and it just didn’t meet the quality and robustness of flavour that I had at Toko Melbourne. 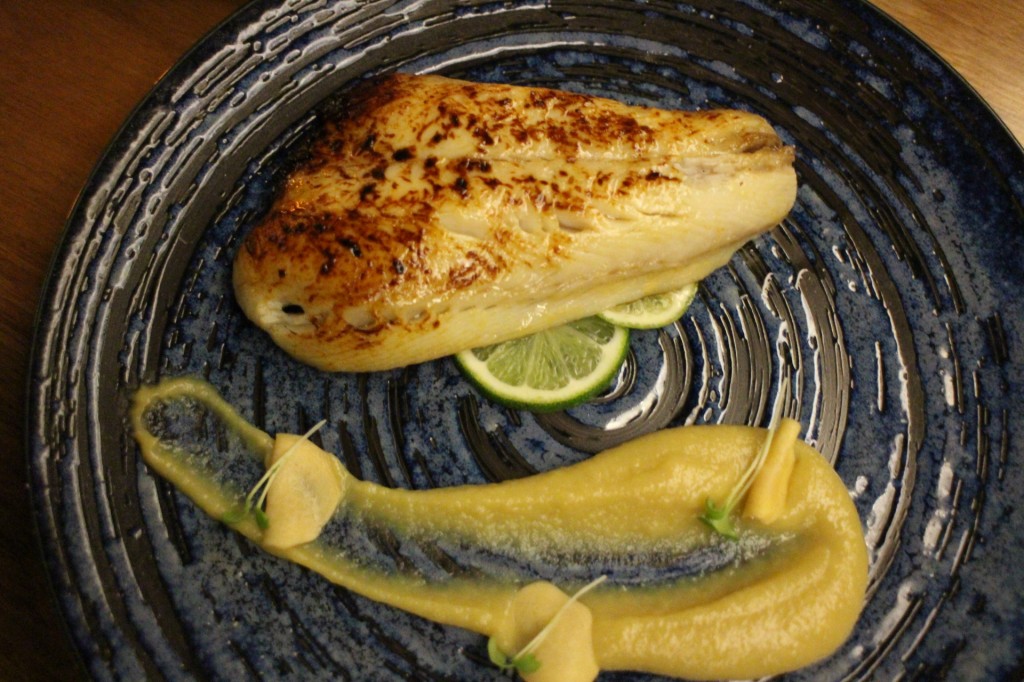 Dessert featured one of the restaurant’s most popular dishes, torokeru chocolato to hazelnut no fondant,  the chocolate and hazelnut fondant with milk ice cream, an indulgent and rich dessert which was reminiscent of a warm and soft ferraro rocher. This dish is very rich so if you’re already full then I would recommend sharing this or selecting something different. We were also fortunate to test out a Vanilla Yoghurt panacotta with crumble, coconut jelly and citrus fruits which is potentially going on the Summer menu (definitely add this to the menu as it was amazing!) A perfect blend of the sour, sweet and zest. 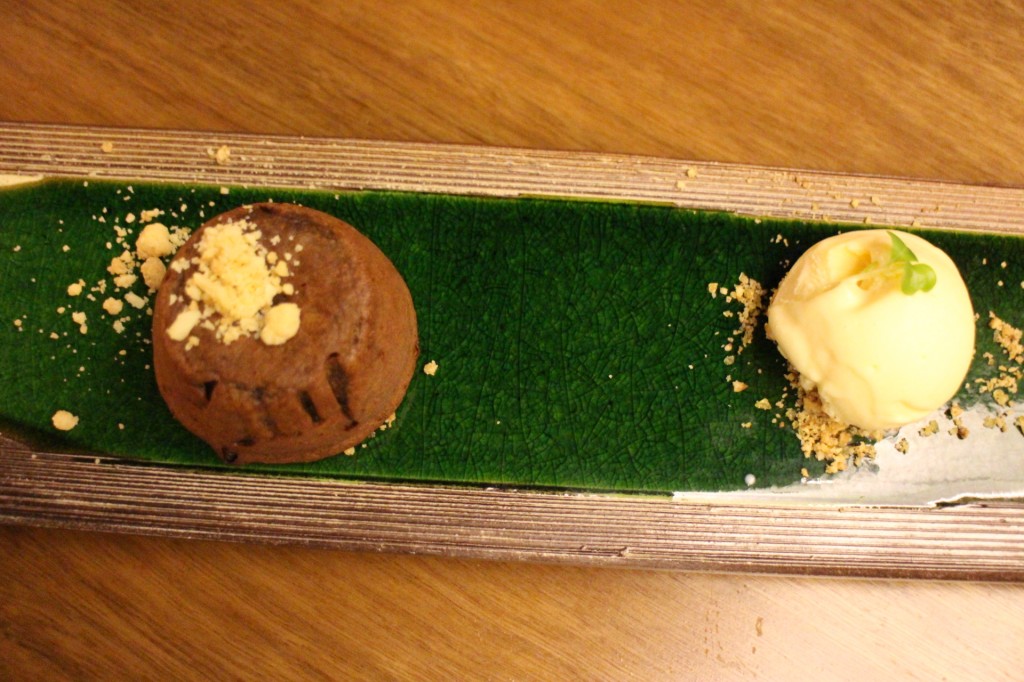 The cocktail and sake list at Toko Melbourne is extensive so you can definitely something to suit your palate and accompany your meal. I had the Shimimoto Sour from their product line, a great mix of apricot infused Yamasaki whisky, Absinthe and honey infused chamomile. A light yet multi-layered cocktail that was lightly sweet and perfect with our dishes.

The level of creativity yet nod to traditionalism at Toko Melbourne is something unique. Definitely a place where you feel like you’re taking a journey through Japan with a bit of a twist. It’s raised the bar for Japanese cuisine in Melbourne.

Open for Lunch and Dinner: Friday & Saturday from 12pm