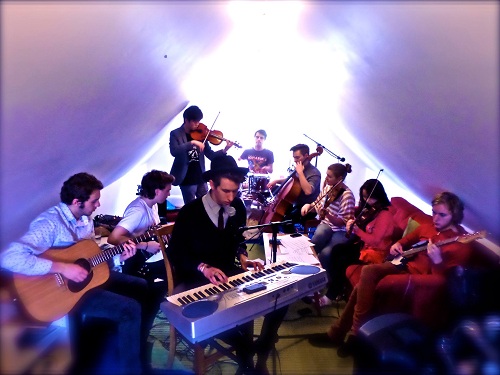 The Super Unsigned Music Festival took place over the weekend at Melbourne’s iconic Corner Hotel. Amongst the up and coming bands performing on the night was Melbourne’s very own Séb Mont and Thee. Recently out of high school and fresh on the independent music scene, the nine-member ensemble played homage to the internationally renowned music venue that is the Corner Hotel.

Their set included alternative indie ballads, a number of which were originals written by lead singer Séb Mont himself. Drawing their inspirations from various musical influences as well as real life experiences, this young fresh faced band offer all that is modern and exciting.

Bringing new light to the alternative indie music scene, Séb Mont and Thee perform with an array of instrumentation. Their definitive mix includes strings, bass, guitar, drums and vocals. Thus drawing away from conventional alternative sounds of other similar bands, and creating one which is unique and engaging.

Stand out tracks throughout their set included ‘Back to You’ and ‘Summer’. The lyrics within each piece were relatable and performed with such honesty and emphasis that the audience was captivated from the very first guitar strum. Lead singer Séb Mont’s dance moves definitely deserve a mention too. His moves resonate so well with the tracks, showing his comfort in each of his ballads. It’s great to see an up and coming performer so confident with their work.

Already having played at a number of respected venues like The Vineyard, The Star, Revolver and The Bendigo Hotel, Séb Mont and Thee now have The Corner Hotel to add to their list. In the process of recording a debut album as well as an up and coming gig lined up at the Wesley Anne, the future is no doubt looking bright for this fresh-faced ensemble.

To catch these guys before they make it big, check out their Facebook page.