One of the best things about Bridal Week is finding out about how people have chosen to celebrate their special day. First up we were lucky enough to talk to the lovely Rosa, who we interviewed last year for her party tips. Rosa, who recently launched her own fashion and lifestyle blog, Rozalia, shared with us some beautiful images and details from her wedding to Melbourne entrepreneur Nick Russian.

Nick and I met 5 and half years ago at his nightclub ‘eve’ I was on my way out with a friend and he was standing at the top of the staircase at the entrance. Now the next part you couldn’t even come up with if you tried….The first words he said to me as I approached him were “I thought I knew every hot girl in Melbourne. Where are you from?”

I proceeded to tell him my name and that I was born in Russia to which he replied “Rozalia Russian the Russian, it just rolls off the tongue.” He then turned away from me and spoke to my friend for 20 minutes completely ignoring me and then finally he offered me a job hosting at the club on a Saturday night. I worked for 2 weeks before resigning and in exchange moved into his house and we have lived together ever since! 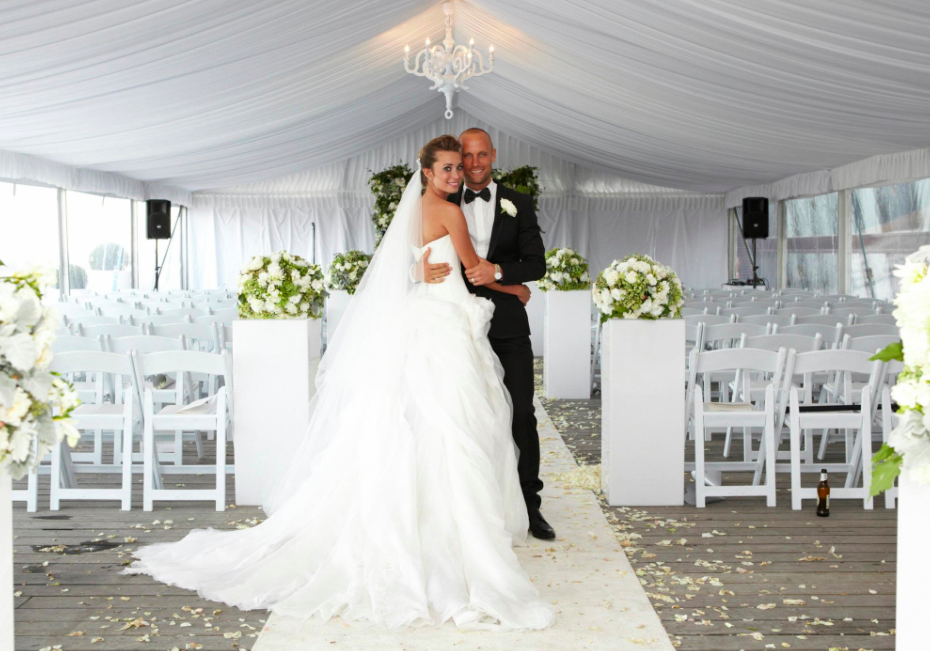 Nick proposed while we were holidaying in Italy. After spending 2 weeks enjoying Rome, Positano and Capri we then made our way to a to the most beautiful town I have ever seen called Ravello which sits up on the cliff overlooking the Amalfi coast. We checked into the most amazing hotel and enjoyed a couple of days just sunbaking and relaxing.

On our final night we were having dinner at the hotel on the balcony when I could tell that his was fidgeting, stumbling his words and just acting weird. It was then in the middle of my spaghetti that he asked me to marry him!

By chance, a moment later fireworks were let off over the Amalfi Coast Mountains that of course Nick tried to take credit for.

I always knew that I wanted a big fairytale wedding dress. I thought this is your one chance to be traditional, so I went to the kings of couture, J’Aton.

We had meeting upon meeting to discuss the exact dress I wanted, the detail, the shape. We decided on a sweetheart neckline to give me shape up the top and a beautiful corseted top. The bodice had this beautiful boning detail throughout and it was decorated with different pieces of fine lace. This was done to give the dress some depth and character.

With the skirt I wanted it big and full! But because I am quite little I was just drowning in it. So in order to stop me looking like a meringue, the boys started the skirt at the top of my left ribcage and then they draped it low across the rest of my body ending it at my right hip. By doing this even though the skirt was big and full it highlighted my waist therefore giving me shape.

In terms of the veil I always knew that I wanted a long beautiful cathedral veil. Again this is going back to me wanting to be traditional.

So one week before my wedding I was standing there in my almost finished dress being completely blown away by how beautiful it was, when the J’Aton boys came to me and said they had a surprise! They had been working on another dress and wanted to know if I would like a second dress to change into. I literally wanted to die! My actually wedding dress was so heavy that I loved the idea of changing into a party outfit.

So on the night around 9pm I did a sneaky outfit change. Apart from my bridesmaids, hair and makeup artist, no one knew that I was getting changed. So as I was being called to the stage to throw my bouquet, I emerged in this amazing beaded, lace little mini dress. It was to die for!! As much as I loved my wedding dress I was extremely relieved to get changed into something more comfortable and something I could dance in. 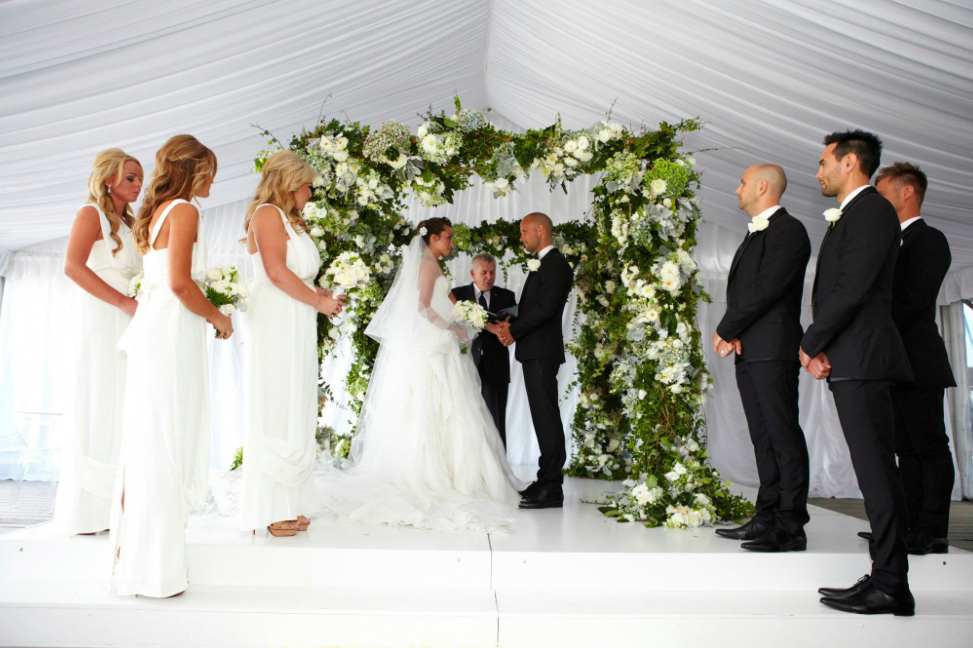 Even before we had set a date I knew I wanted our wedding to be all white. This was also the case with my bridesmaids’ dresses.

I know a lot of people say that only the bride should wear white to stand out and so that she is special, but I’ve always said that I’m pretty sure everyone will know who the bride is so I don’t see why it’s such a big deal!

I chose white, long Zimmermann dresses for my girls. It was a one shoulder number which flattered all of them. I wanted to find a belt that would make the dresses a bit dresser but they were all so expensive! So I found some beaded headbands with some beautiful crystal sewn into them that I loved and I got my seamstress to turn them into belts. And this little touch of beading and bling really dressed up their dresses and made them that little bit special. The girls looked absolutely beautiful and I love that when I look at wedding photos that everything and everyone match. 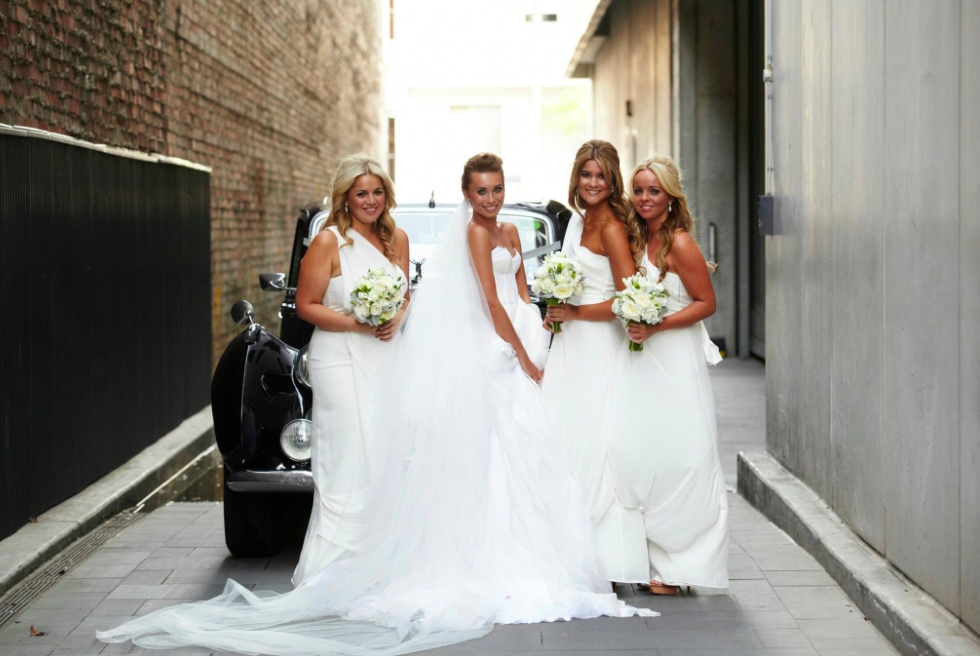 Nick opted for a classic black AG suit. He had it tailored into a super slim fit and teamed it with a Dior shirt and shoes. I wanted him to wear a tie, but he really wanted to wear a bow tie. In the end he chose to wear a black bow tie with small polka dots. We have a picture of his grandparents on their wedding day at home and his nonno who Nick looks exactly like had a bow tie on. I look at the picture and think he looks timeless so I’m glad Nick wore a bow tie and hopefully many years down the track when our grandchildren look at our wedding photo they will think their nonno Nick still looks timeless.

In keeping with our black and white theme all the groomsmen wore black AG suits with white shirts and black ties. When I look at our wedding picture and I love how everyone matches and it just looks so classic with everyone in black and white.

As soon as we set the date we started looking for a florist. I knew I wanted everything white but that’s about it. We went to a few florists and to be honest they gave us the same cliché story about it being our special day and it’s all about love etc… Cringe!

Then we went to Victoria Whitelaw. I had heard of her and I knew she was the queen of wedding flowers, so I was extremely nervous to meet her. We sat down and I showed her some photos of what we liked and her response to us was, “if you pick me all I want to do is to blow you away. I guarantee that I will blow you away”. And that she did!

She created the most amazing chuppa that every inch of was covered in beautiful white and green flowers with a hint of lilac to make it pop. Down the aisle we had plinths with amazing displays and flowers and on the floor we had a row of rose petals with petals.

A special touch that we did was we placed cones of rose petals on everyone’s chairs for people to throw when the ceremony was finished. 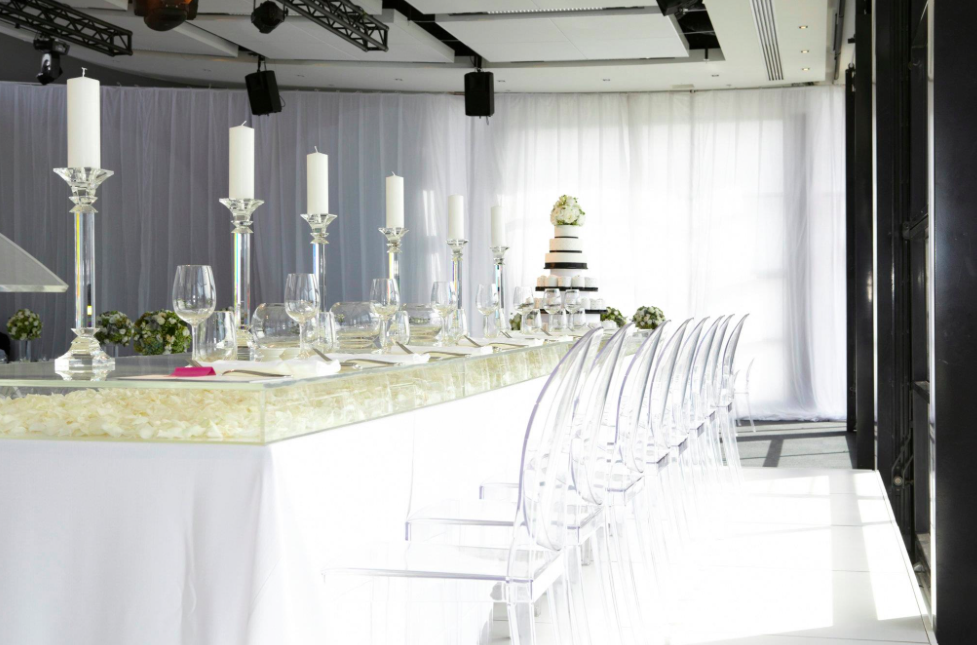 THE CEREMONY AND RECEPTION

We first went up to ‘Luminare’ for a Myer function a few years ago. We instantly fell in love with the venue! But it still could not rival the Merrimon Wynne venue that we’d been to this year.

It is a rooftop reception area with this massive deck that wraps around the entire building. It had the most incredible views of the city and the biggest tick for us was that no one we knew had ever got married there let alone even heard of it.

We were not a fan of big delays between the ceremony and reception as we wanted our guest to get there and then relax for the entire evening. So we chose to have our ceremony on the deck at 5pm followed by canapés and then straight to dinner next door at the reception room at 6 30. I thought this worked quiet well as guests could begin to drink and socialize as soon as they arrived.

Being on a rooftop in Melbourne, meant that weather was always going to be an issue. However, we were extremely lucky to have family friends who owned ELITE cranes, so generously donated their time to crane a marquee up on to the deck in case of bad weather. On the day we were actually blessed with clear blue skies and 25 degrees but the marquee was beautifully decorated so really set the mood for our ceremony.

We draped the ceiling of the marquee and put up chandeliers so combined with flowers and candles it looked very romantic but still fresh and modern being all white. 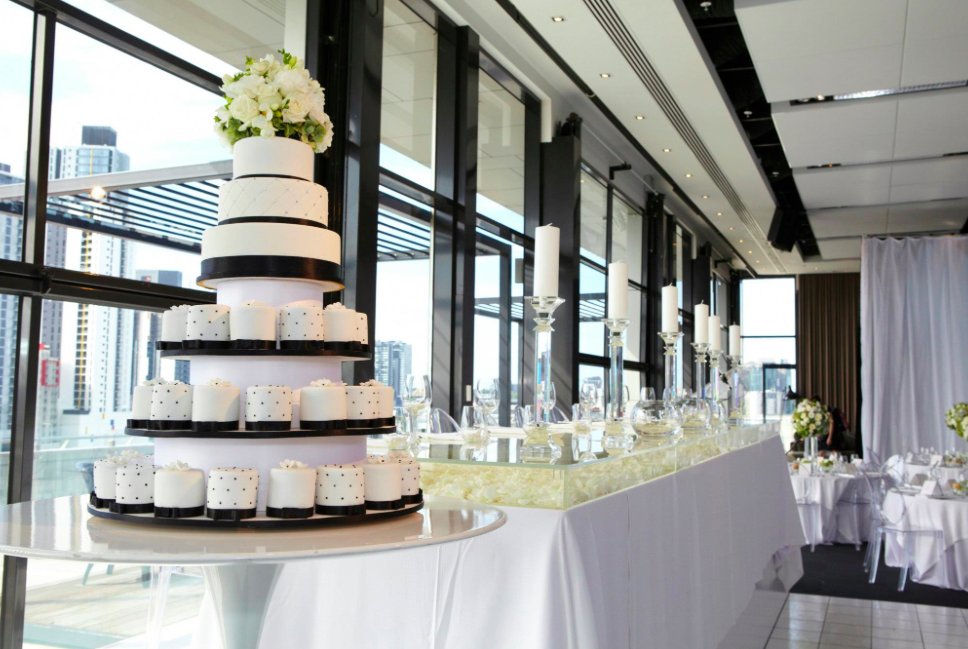 Our first dance was to ‘Al Green let’s stay together’ we loved this song because when we were in Italy we went to a little piano bar and they played this song. I never heard it before but loved it straight away. Even though we had a friend choreograph the dance and a number of rehearsals we still managed to muck it up on the night! Our friends and family got a good laugh at least.

My favourite memory from our wedding day would definitely have to be walking down the aisle. Throughout the day I wasn’t nervous at all. I was extremely calm. Then all of a sudden when we got to the ceremony and I stepped toward the aisle it all hit me! This feeling came over me that I can’t describe but I’m sure many brides would’ve experienced. It’s the feeling that you know this is it. You’re getting married.

I walked down the aisle to ‘Desiree Kissing you’ and the one thing I will always remember for the rest of my life will be the look on Nicks face when he saw me for the first time, standing there in my wedding dress with the veil over my face. It’s a look that I had never seen before and one I will never forget. 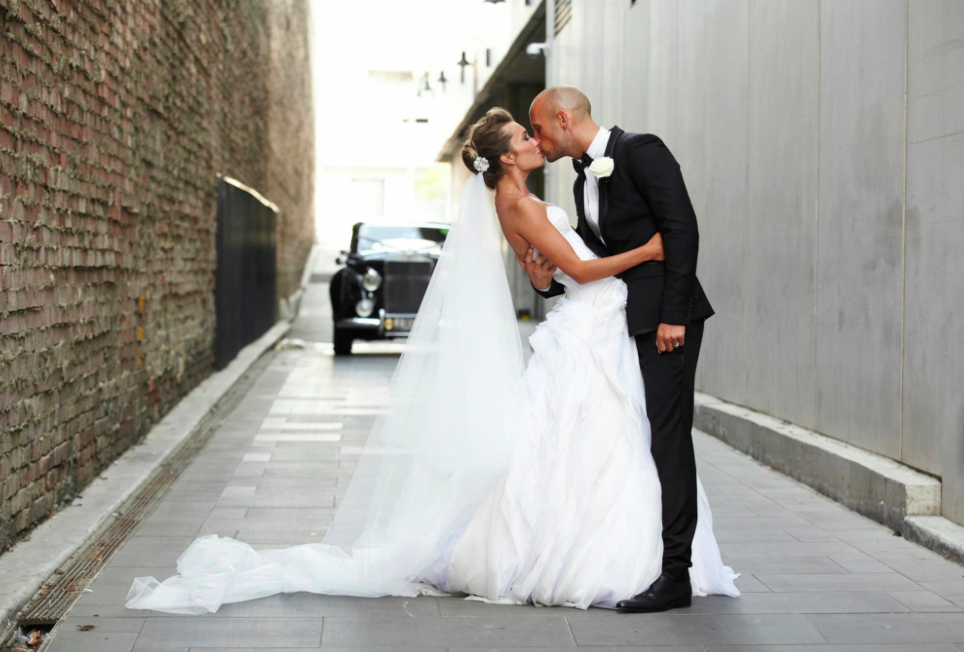 My major tip is to ask on as many favours from friends as possible. Nick and I both hate asking for favours; however this was the one time we brought on every favour possible. We are lucky enough to have friends within the events industry so many of them donated their time including djs’ sound & lighting, printers, designers, videographers, photographers, Crane companies etc and it was all generously  put together by our dear friend Simon Phan who owns Trumpett events. Another one of our friends Joey Scandizzo donated his time and did both mine and the bridal parties hair as a wedding gift. So asking for help instead of wedding presents is a great way to reduce your costs!