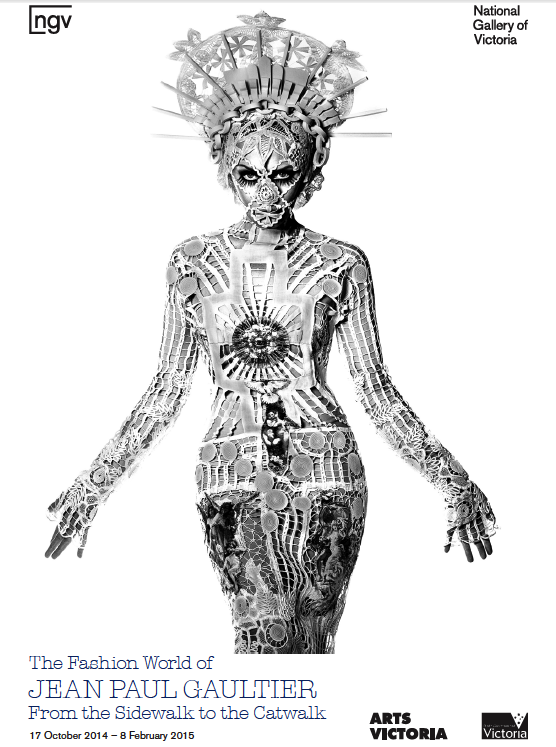 Earlier this morning the art glitterati gathered in a dimly lit room in the depths of the NGV awaiting the announcements of its newest summer series exhibition. Minister for the Arts Heidi Victoria MP prefaced the announcement by revealing that the exhibit focused on a fashion designer who was “…exuberant, spectacular and broke all the rules in order to redefine what fashion can and should be”.

Yes, Jean Paul Gaultier is coming to Melbourne, and he’s bringing forty years of fashion with him.

The exhibition titled ‘The Fashion Word of Jean Paul Gaultier From the Sidewalk to the Catwalk’ will run from the 17th of October till the 8th of Feb and is the first international exhibit dedicated to the ground breaking French couturier. When designing the exhibit, curator Thierry-Maxime Loriot said he had to consider Gaultier’s role as an artist and a humanist. He says his decision to use mannequins with varied skin tones and the animated faces of Gaultiers’ muses winking and smiling was because “Gaultier designs his clothes for humans, not mannequins”.

The spectacularly technical exhibit is divided into six thematic parts, each of which explores the obsessions and passions of ‘enfant terrible’ Gaultier and follows his career long refusal to adhere to fixed codes of fashion and standards of beauty and his resounding influence on fashion and popular culture.

The exhibit will feature over one hundred and fourty superbly detailed garments spanning his spanning his creative output, from the first dress created in 1971 and the launch of his first prêt-à-porter collection in 1976 to his most recent haute couture collections. Alongside the garments will be sketches, excerpts from films and runway shows, stage costumes and many of his renowned accessories.

This spectacular overview of Gaultier’s extensive oeuvre will include exclusive material not exhibited in previous venues of the tour and focuses special attention on Gaultier’s love for Australian women. He says that  “In preparing this exhibition I have realised how strong my ties to Australia are – Nicole Kidman was my first couture client; I have dressed Cate Blanchett on numerous occasions; Kylie is a dear friend and I have had the pleasure of working closely with her on her tours. I have also been working for many years with models Gemma Ward, Catherine McNeil, Jarrod Scott, and the list goes on.”