With their second album ‘You’re A Shadow’ playing on iPods and radio stations everywhere, the Hungry Kids of Hungary have been across Australia playing gig after gig and have just been announced to play the highly anticipated annual festival Groovin’ The Moo for 2013, headlining with the likes of The Kooks, Flume and DJ Example. With an album tour in the works, we had the opportunity to speak with the delightfully witty bassist Ben Dalton about their band’s enormous success, talent, and of course their latest album.

If you could collaborate with any musician dead or alive, who would it be and why?

I would like to work with Childish Gambino & Steve Martin because it would be wonderful. Banjo, beats, madness.

Do you think your sound has changed much from your earlier songs?

For sure. We used to play quite a diverse bunch of music and we’ve now figured out what we truly love doing. It’s definitely more ‘us.’

What can fans expect to see at your live shows?

A bunch of friends playing music that excites us. There may also be solos, speed bongos and lots of foul language.

You’re playing at the Groovin’ the Moo festival, which has an amazing line up, who are you most excited about seeing?

Everyone! The Bronx will be sick. Also keen to see Alpine and They Might Be Giants… Yeah, everyone!

What is the major difference between being a signed artist and an independent one?

Control? Possibly? It really depends who you’re signed to and what kind of deal that you have. We’re lucky enough to have an independent label that supports us and we still get to make the music that we want to make. Also, a label will usually give you some money to make an album but they will want that money back. If you’re independent, you have to raise the money first… or steal it. Either option is pretty good.

Your music in the past few years has blown up worldwide, how does it feel to be considered an international success?

It’s pretty crazy. Going to a different country and seeing people singing along to your songs is a good feeling. We once heard a song of ours being played on an American commercial for a TV program. If that isn’t the meaning of international success I don’t know what is.

Describe your latest album ‘You’re a Shadow’ in three words.

Who is the artist behind the cover art?

The amazing crew at We Buy Your Kids. We couldn’t be happier.

Do you have any upcoming shows that you’re particularly excited about?

Groovin the Moo is going to be a blast. Our album tour is right around the corner though and our excitement is building very quickly. We are very keen to get out there!

When you’re not making music or touring, where can you be found?

Most of us still work and even study so we can be found going to and from work, sharking people at pool halls and spending all of our hard earned cash on music gear and records. 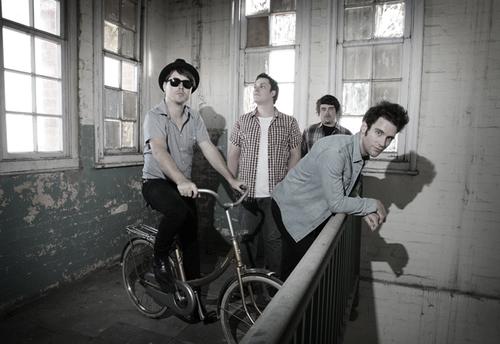 Check out more of the Hungry Kids of Hungary here: www.hungrykidsofhungary.com/