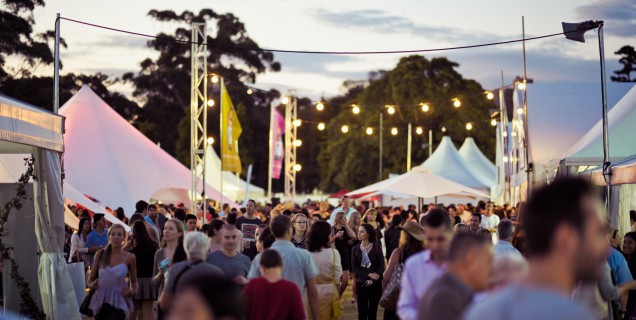 I recently braved the cold to go along to the Taste of Melbourne at Albert Park. I was in for a treat when I heard that the likes of Paolo Masciopinto (Sarti), Andrew Logan (Mamasita), Benjamin Cooper (Chin Chin), Frank Camorra (MoVida) and Daniel Wilson (Huxtable – Mmm Huxtaburgers!) were showcasing their talents.

With so many greats bundled into such a small place, I was pushed for time and room in the belly. So armed with our pre-selected favourites and must do’s highlighted in our guidebooks we set out to conquer the delights presented by some of Melbourne’s top restaurants.

First up were some tasty char-grilled lamb kebabs from the crew at Movida accompanied by some house made bread – serious man food! Then some tasty tacos from Mamasita washed down with some magic sangria (that’s your fruit and veg right there). We made our way around (via the beer hall – thank you Sail & Anchor) to Huxtable’s side project Huxtaburger. We couldn’t resist the ‘Douche Burger’ with foie gras and wagyu beef – hot damn it was good!

After sampling some top notch wines from the Yarra Valley including the 2012 Chardonnay from Punt Road, we then wandered over to the Galliano tent. We’d been told there were some pretty good cocktails coming out of there and we wanted to know more.

Now, when you think Galliano you’d be forgiven for thinking “hmmm I think I set myself on fire once trying to light a Sambuca shot once” who hasn’t. Well I was pleasantly surprised when they put up an espresso martini using their Ristretto 100% espresso, Aaron tried the Vanilla Pallino and we both tried the Amaretto Sour. Our favourite was the Ristretto espresso martini, such deep and intense flavours. 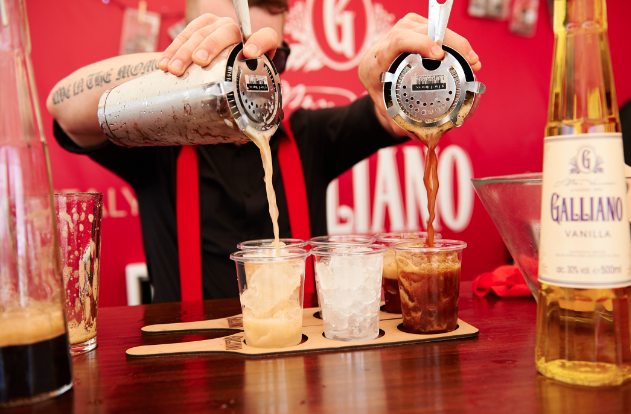 A quick game of Bocce with the Galliano lads then I set out to find some dessert. It was too cold for Burch & Purchese’s ‘Nitro Summer Fizz’ which was nitrogen white choc/champagne/ rasp & peach, so…. we tried it anyway. With room enough for one last treat, I staggered over to Albert St Food & Wine to try Philippa Sibley’s “Melba” which was Meyer lemon tart ice cream, peaches, meringue, gold leaf and raspberry, and then I was really done!

Tired, exhausted and cold I walked out of Taste with warm bellies and satisfied minds. We’d given it a good crack – mission accomplished. Until next time.