Baklava fans will be thrilled with the news that Port Melbourne Greek yogurt store, blu spoon, has launched the nations first Baklava Bar this week. Those unfamiliar with the traditional Greek sweets – rich, layers of filo pastry and chopped nuts sweetened with honey – are only a taste away from being converted. Yia Yia’s recipes tend to have that effect. 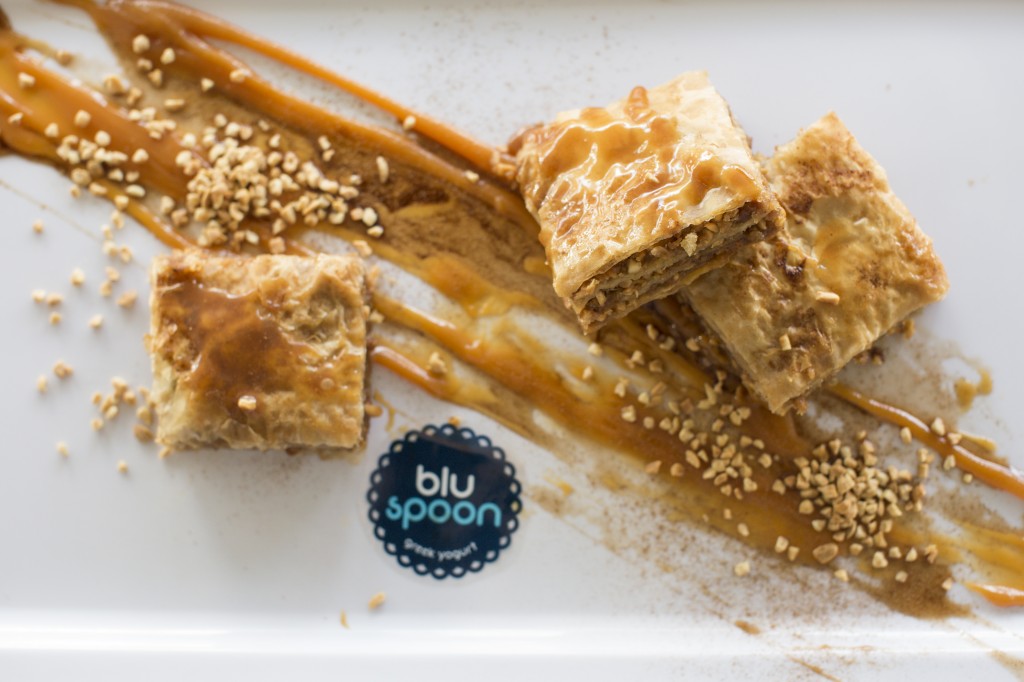 Brought together by friendship and heritage, Anna Provataris and Conrad Manolidis (also of Blackmilk interior design) opened blu spoon in 2014. They transformed their childhood memories of devouring authentic strained yogurt in Greece into an offering of parfaits, frozen yogurts, Greek ice cream and the soon-to-be-opened Baklava Bar in Melbourne.

All desserts, including the baklava, are handmade with family recipes – in fact Conrad’s mother and auntie have made baklava since they were nine-years old under the watchful eye of their own mother. That sweet Greek heritage also runs through Anna’s veins. The granddaughter of a Cypriot pastry chef, you’ll be able to taste the regional influence in baklava flavours such as orange and hazelnut, rose petal and pistachio.

Since blu spoon came to Bay Street, customers have been asking for homemade baklava. It’s already been a hit topping, blended into strained frozen Greek yogurt and Greek ice cream. The Baklava Bar will be an extension of blu spoon’s Greek yogurt offering, so customers can sprinkle it on top of their favourite frozen yogurt creation or enjoy it by itself in store or at home.

The traditional recipes have been given a contemporary spruce and include combinations never before trialed in Australia. As well as chocolate and hazelnut, pistachio and almond, there will also be browned butter, cheesecake and the much-anticipated salted caramel baklava. The new baklava chocolate, made with Belgium chocolate, is another way blu spoon is combining the old and the new.

All of blu spoon’s yogurts are packed with live cultures and beneficial bacteria. Made daily with all- natural ingredients and without artificial preservatives and additives, it’s also free from gluten, permeates, gelatin and cream. The yogurt is strained, not stirred, which removes the whey (the milk serum that separates from the mass after cooking) as well as the need for thickeners. It’s just like Anna and Conrad remember it from back home.